Family in As I Lay Dying

“My mother is a fish.” (Faulkner 28) This quote is part of the internal dialogue of Vardaman, a small child struggling to cope with and to rationalize the death of his mother. He is caught in confusion and existential deliberation as he tries to fathom the passing of his mother as well as his own existence and mortality. Vardaman had just caught a fish and proceeded cut it up into little pieces; once it was cut up, it was no longer a fish.

Don't use plagiarized sources. Get your custom essay on
“ Family in As I Lay Dying ”
Get custom paper
NEW! smart matching with writer

It was a fish, and then it was not.

In Vardaman’s eyes, this reflects the death of his mother. She was his mother…and then she was not. This is one of many times in which Faulkner introduces a perspective on death. He uses the voice of a child to convey a childlike confusion and denial in a situation of mourning; an experiential sense that many encounter in life and in loss. Faulkner presents his dark themes through a tone of morbid irony.

We find a prime example of this tragic comedy in the shortest section of the entire novel: ‘My mother is a fish.’ The quote, despite its simplicity, has the ability to tug at our heartstrings, because it is derived from such a raw, innocent and universal emotion. Humorous in its concise brevity, Impactful in its grasp of a child’s thought process, and simply incredibly sad. “And I went down on my knees right there. I begged her to kneel and open her heart and cast it from the devil of vanity and cast herself upon the mercy of the Lord.

But she wouldn’t.” (56) -and- “One day I was talking to Cora. She prayed for me because she believed I was blind to sin, wanting me to kneel and pray too, because people to whom sin is just a matter of words, to them, salvation is just words too.” (60)

As I Lay Dying is written in a unique, stream-of-consciousness, style in which William Faulkner tells the story of a family through the eyes of many different characters. By writing in this way Faulkner allows the reader to experience each event through countless different lenses, creating a multidimensional world similar to our own. This mode of storytelling breaks the traditional protagonist vs. antagonist mold and allows us to understand each complex character on a deeper level. It also allows the reader to view the events of the story in multiple different ways. This aspect of Faulkner’s writing becomes extremely impactful on the reader’s frame of mind. Everything from the culture we were raised in, the country we live in, religion, current events, our personal experiences, our friends and family, to even the physical angle at which we look at something can influence our thoughts, opinions, and ultimately our actions. Our culture encourages an “us against them” mentality which often leads to close-mindedness.

We tend to form a single image of others, but by generalizing in this way, we fail to see an individual, instead, we see a reflection of our own beliefs and misconceptions. Faulkner utilizes a unique arrangement to encourage us to look at things from different perspectives. By looking at things from multiple angles, we are able to see the whole picture a little more clearly. “That’s what they mean by the love that passeth understanding: that pride, that furious desire to hide that abject nakedness which we bring here with us, carry with us into operating rooms, carry stubbornly and furiously with us into the earth again.” (15)

Throughout the novel Peabody, an experienced doctor stands as a voice of reason. He approaches Addie’s death with objective realism, providing another unique perspective on the concepts of death and mortality. But in this situation, he focuses on something a little less lucid: love. In referencing the “love that passeth understanding,” Peabody invokes a Biblical reference, in which the same phrase is used to describe the love of Christ. Religion is heavily ingrained into the morals and beliefs of the characters in this book and faith often becomes a source of moral direction. Peabody’s use of a biblical reference to describe his relationship with his mother demonstrates both the extent of his emotion as well as the degree to which the characters’ understandings of their experiences are rooted in religious beliefs.

As I Lay Dying is not didactic or moralistic, however, this passage exemplifies the extent to which the characters themselves consciously and unconsciously interpret their feelings and experiences using the values in the Bible. “Sometimes I ain’t so sho who’s got ere a right to say when a man is crazy and when he ain’t. Sometimes I think it aint none of us pure crazy and ain’t none of us pure sane until the balance of us talks him that-a-Way. It’s like it aint so much what a fellow does, but it’s the way the majority of folks is looking at him when he does it.” (80)

In this quote the author suggests that sanity is simply a relative term and that apparent insanity is nothing more than a failure to conform to societal norms. This idea reflects a common idea of subjectivity that the novel’s various narrative perspectives create. In human nature, good and evil, sanity and insanity, lightness and darkness, coexist; one cannot subsist without the other because one’s existence depends upon its opposite. Humans are not truly good nor truly evil. We are, by nature, commingled of good and evil rather than inherently one or the other. In the same way, nobody is “pure crazy” or “pure sane” for it is impossible to be truly one or the other. In this statement, Faulkner begs us to examine absolutes, suggesting that the way we judge a person’s character is based on fluid opinion, perspective, and social constructs. If beauty is in the eye of the beholder then so is inelegance. 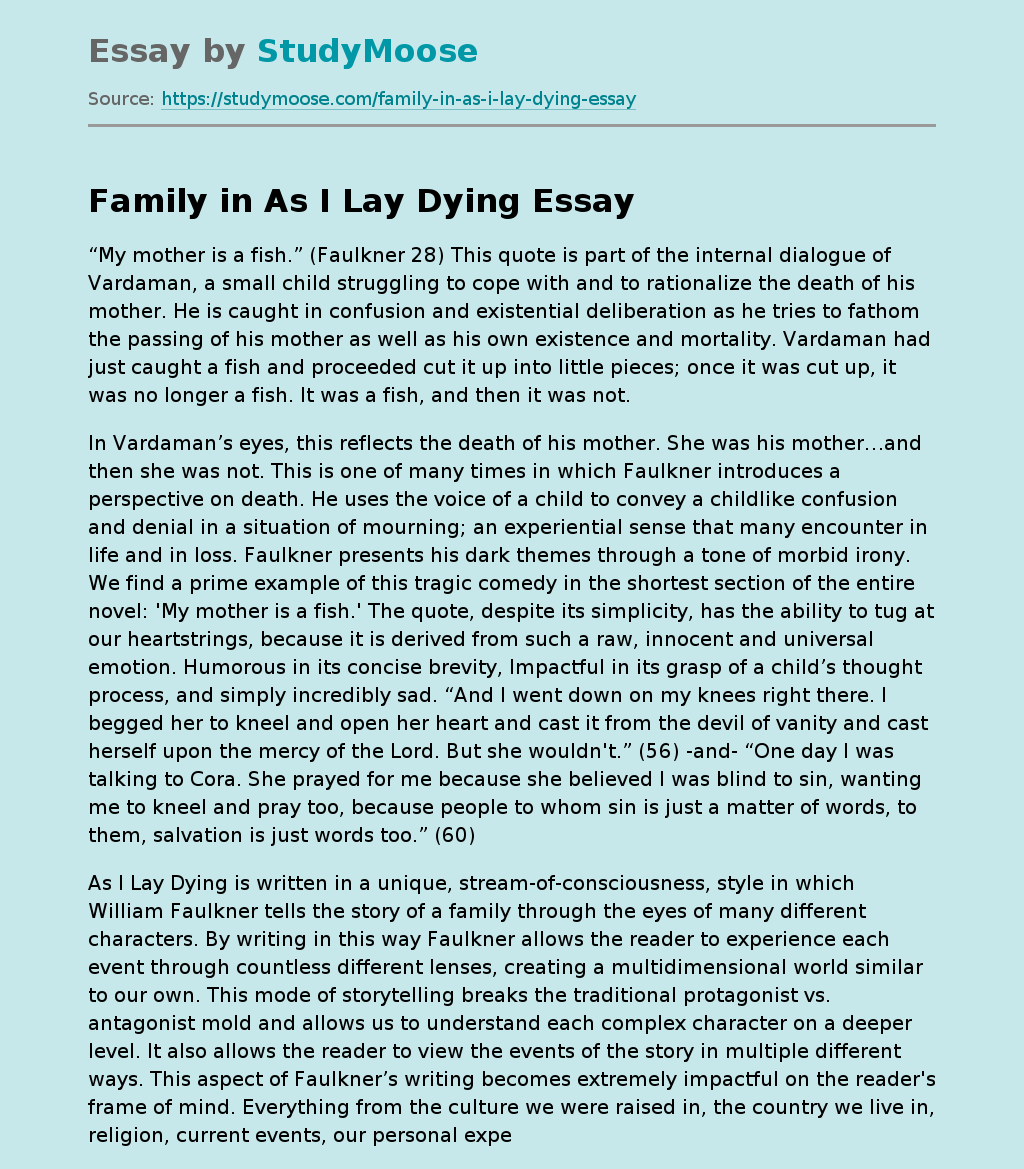