Fairy Tale as a Component of Movie Shrek

The animated film ‘Shrek’ is a modern portrayal of a traditional story. It displays most, if not all qualities of both legend and fairy-tale. As the opening scene begins with non-diegetic music (audible to audience only) and a magical light shining on a large book with the traditional starting of a fairy tale ‘Once Upon a time’. This opening scene demonstrates one feature of the fairy-tale genre. This can also be seen through the characters, in magic and a happy ending.

Don't use plagiarized sources. Get your custom essay on
“ Fairy Tale as a Component of Movie Shrek ”
Get custom paper
NEW! smart matching with writer

There are many more fairy-tale features throughout the film, but the appearance of Robin Hood also highlights the legend aspect of the film. The film techniques create this genre though the illustrators use of light and shade, and excellent use of camera shots. The features of the genre are demonstrated clearly in the characterization used in the film. During the beginning of the film, various well know and familiar fairy-tale characters are present.

The characters Tinker bell, The Three Little Pigs, the three bears and Snow White are among the many creatures that appear in the film.

Apart from the characteristics, magic is also a main feature in the film. Throughout the film many displays of fairy-tale magic occur. The magic mirror and transformation magic are just two magic features seen in the film. The magic mirror, first seen in Disney classic ‘Snow White’, adds to the fairy-tale magic genre in the film. When Shrek rescues Fiona from the tower, she is determined to reach Lord Farquaad before sunset. As Shrek and Donkey deny her request and set up camp, so that they would not know of the spell she suffered that could only be broken by true loves kiss.

This storyline is often followed in many fairy tales and legends, and adds evidence to the classification of the movie. This magic has a large part in the happy ending of the film. A somewhat happy ending is seen at the end of the film. As Shrek stops the wedding of Fiona and Lord Farquaad, the sun is setting and Fiona is seen in the form of an Ogre. Shrek and Fiona kiss, fall in love, and live happily ever after. The happy ending at the end of the film is yet another aspect of ‘Shrek’ that shows it could be classed as a fairy tale.

However in a traditional fairy-tale, the handsome prince would slay the dragon, rescue the princess, fall in love and live happily ever after. However the creators of ‘Shrek’ chose to reverse the roles, having the “Ugly Ogre” as the protagonist, and the handsome prince as the antagonist. This theme worked well, and was strongly supported by various camera angles. The “Ugly Ever After” as quoted in the movie, is yet another piece of evidence that Shrek could be classed as a fairy-tale. A fairy-tale consists of; unique characters, magic and a happy ending of which are present in the film ‘Shrek’.

A legend consists unreal creatures, which is also present in the film. It clear that ‘Shrek’ covers enough of each genre to be classed both legend and fairy-tale. Cross-Cutting: Editing two different sequences and ‘cutting’ back and forth between them in order to create a relationship between the action. This technique is used in Shrek when Shrek, Donkey and Fiona are running out of the castle, with the Dragon literally breathing down their necks. This technique enhances the tension and is at one of the major climaxes of the movie.

Shrek is something new, maybe a misshaped fairy-tale, or… The last thing you would expect is the first thing Shrek would do. For e. g. in the beginning of the movie, Shrek (himself) reads a book, while sitting in the outhouse and the story begins with ‘’Once upon a time…’’ This makes the audience think: ‘’oh no, it’s one of these boring simple fairy tales! ’’ but what he/she doesn’t know is that next thing that’s going to happen is insane! ’’ Shrek reads a line in the book as follows: ‘’She waited in the dragon’s keep at the highest room of the tallest tower. For her true love

and true loves first kiss…’’ then Shrek rips out a page from the book, while saying: ‘’like that’s ever going to happen! ’’ The toilet flushes, Shrek comes out and swinging rock music starts to play (Smash Mouth, All Star with Lyrics). Believe me, that’s not the last thing something unexpected will happen, and by the way, I think I know why Shrek ripped that page off the book… let’s just say he ran out of toilet paper! This tells the audience that Shrek is not one of those obvious fairy tales; it is something else, something new, and let’s just call it a Modern Fairy-tale.

In ‘’regular’’ fairy tales the story would end like this: The prince slayed the giant fire breathing dragon and bla, bla, bla, when the kiss of true love touched the princess’s lips bla, bla, bla, then they lived happily ever after. Shrek changes the normal conventions of a fairy-tale… ‘‘Wait, what are the normal conventions of a fairy-tale? ’’ Well… there are many, and they are all different, but here are some I can name of at the moment: princes and princesses, dragons and heroes, kings and queens, knights and castles, kingdoms and forests,…

An Analysis “I’m not the one with the problem, it’s the world that seems to have the problem with me. People take one look at me… A big stupid ugly Ogre. They judge me before they even know me…”Every day Every day, millions of people are judged based on a simple first impression. Society is quick to pass judgements on people based on factors such as appearance, language, setting, and possessions. However, when the time is taken to get to know a person, it is proven more times than not, that the judgements taken are false. As expressed throughout the movie Shrek, sometimes things are not always as they appear.

It is primarily through the characters in Shrek that this theme is expressed. At home in his swamp, a flatulent ogre named Shrek defends his life of solitude, though deep down it’s probably not his first choice. Due to the fact that he is a strikingly ugly ogre, he is automatically assumed to be evil and cruel, therefore labelled an outcast to society. Shrek exploits that misconception in order to protect his privacy.. An example being when he was confronted by torch bearing, pitchfork wielding villagers. He describes the gruesome fates awaiting those who disturb him, in hopes of the villager

This essay is about fairy tales with the nasty ogre, the good prince, the witch, the beautiful princess and love. I am going to look at a different type of fairy tale. At the begging of the film Shrek is sitting on the toilet reading a fairy tale story about a prince and a princess falling in love. He then says “as if that’s going to happen” and laughs then rips the page out of the book to use to wipe himself with. Thus interrupts the traditional fairy story because we would normally expect a handsome prince or a fairy god mother not an ogre.

This opening suggests that it is a different kind of fairy tale with different elements to the story. Shrek is seen as a very frightening character at the beginning of the film. When he encounters the story book characters he scares them and threatens them “I’ll grind your bones to make bread, squeeze the jelly from your eyes and chop your liver up and have it on toast”. He also proclaims that “ogres are more frightening then giants”. He gives them a mighty rore and the story book characters Symbolism: An object or image that represents something beyond the literal. In ‘Shrek’, symbolism is used in a quite a few different ways.

One of the most obvious examples of symbolism in ‘Shrek’ is Shrek himself. Well, the colour of Shrek. Shrek is an ugly monster. He is also green. Associating the ugliness with the colour green, we can make the assumption that his colour symbolises his ugliness, grossness and in a way is almost a sickening colour, that can be related to our first impressions of Shrek. This enhances ‘Shrek’ as it gives us a clearer understanding of the Ogre. Also, symbolism can enhance films as it shows more meaning and depth behind the obvious that help us to better understand the character or whatever object or scenario it is.

A camera shot taken from only a short distance away – used to show detail and to convey more emotion into the character’s personal space. This technique is used throughout the whole of ‘Shrek’. An example of one area where this technique was used was when Shrek was victorious when he fought against Lord Farquaad’s men. This helps us to be ‘face to face’ with Shrek. In other words, we are able to see the emotions of victory conveyed on his face. In other movies as well, close up/extreme close ups help us see more detail that we wouldn’t be able to see from a further distance.

Fairy Tale as a Component of Movie Shrek. (2016, Jul 18). Retrieved from http://studymoose.com/fairy-tale-as-a-component-of-movie-shrek-essay 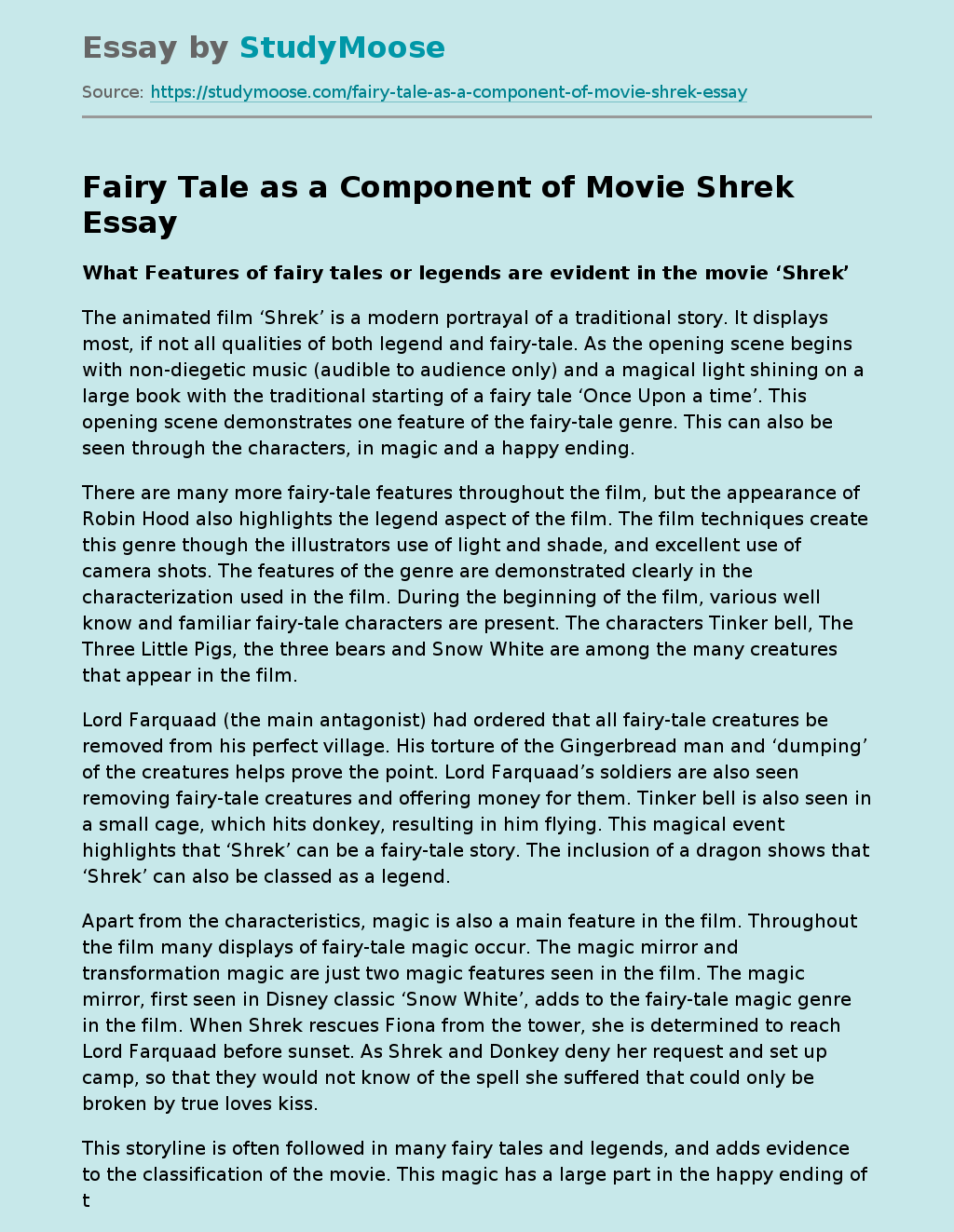