The object of this experiment is to find the relation between pressure and volume for the expansion of air in a pressure vessel – this expansion is a thermodynamic process.

The expansion or compression of a gas can be described by the polytropic relation , where p is pressure, v is specific volume, c is a constant and the exponent n depends on the thermodynamic process. In our experiment compressed air in a steel pressure vessel is discharged to the atmosphere while the air remaining inside expands.

Don't use plagiarized sources. Get your custom essay on
“ Experiment on polytropic process ”
Get custom paper
NEW! smart matching with writer

Temperature and pressure measurements of the air inside the vessel are recorded. These two measurements are used to produce the polytropic exponent n for the expansion process.

Sadi Carnot (1796-1832) [1] in his 1824 “Reflections on the Motive Power of Heat and on Machines Fitted to Develop This Power,” examines a reciprocating, piston-in-cylinder engine. Carnot describes a cycle applied to the machine appearing in Figure 5.1, which contains his original sketch.

Carnot gives the following six steps for his machine:
1.The piston is initially at cd when high-temperature reservoir A is brought into contact with the cylinder head ab. 2.There is isothermal expansion
to ef
3.Reservoir A is removed and the piston continues to gh and so cools to .

A decade later Clapeyron [2] analyzed Carnot’s cycle by introducing a pressure-volume, p-v diagram. Clapeyron’s diagram is reproduced next to Carnot’s engine in Figure 5.1. Claperon labels his axes y and x, which correspond to pressure and volume, respectively. We will examine two process paths in this diagram: the isothermal compression path F-K and the isothermal expansion path C-E. Since both of these processes are isothermal, pv = RT = constant. This is a special case of the polytropic process , where, for the isothermal process, n = 1, so we have the same result, pv = c.

Photographs of the equipment appear in Figures 5.2 and 5.3, and a sketch of the components appears in Figure 5.4.

Pressure measurements come from the pressure transducer tapped in to the pressure vessel shown in Figure 5.4. The transducer is powered by the unit labeled “CD23”, which is a Validyne [3] carrier demodulator. The fine wire thermocouple is described in the Figure 5.3 caption. Both thermocouple and pressure signals feed into an Omega [4] flatbed recorder.

The three discharge valves on the right side of the vessel have small, medium, and large orifices. These orifices allow the air inside the vessel expand at three different rates. The pressure vessel is first charged with the compressed air supply. This causes the air that enters the vessel to initially rise in temperature. After a few minutes the temperature reaches equilibrium at which time one of the discharge valves is opened. Temperature and pressure are recorded for each expansion process. These data are then used to compute the polytropic exponent n for each process. It is important to note that the temperature and pressure of the air inside the vessel are measured, not the air discharging from the vessel.

Pressure and temperature data, for the three runs, are provided in the EXCEL file “Experiment 5 Data.xls.”

The polytropic exponent n can theoretically range from . However, Wark [5] reports that the relation is especially useful when . For the following simple processes the n values are:

In our experiment the steel pressure vessel is initially charged with compressed air of mass . Next, the vessel is discharged and the remaining air mass is . This final mass was part of the initial mass and occupied part of the volume of the vessel at the initial state. Thus expanded within the vessel with a corresponding change in temperature and pressure. Therefore mass can be considered a closed system with a moving system boundary and the following form of the first law of thermodynamics applies

If the system undergoes an adiabatic expansion , and if the work at the moving system boundary is reversible. Furthermore, if we consider the air to be an ideal gas with constant specific heat. With these considerations the first law reduces to

Using the ideal gas assumption and differentiating this equation gives

(5.4)
Substituting Equation 5.4 into 5.3 and using the relationships and gives

which is a special case of the polytropic relationship given by Equation 5.1, with n = k.

It is important to note that in the development of Equation 5.5 the expansion of inside the pressure vessel was assumed to be reversible and adiabatic, i.e. an isentropic expansion. In our experiment the adiabatic assumption is accurate during initial discharge. However, the reversible assumption is clearly not applicable because the air expands irreversibly from high pressure to low pressure. Therefore we anticipate our data to yield .

Two approaches are used to determined the polytropic exponent n from the data:

1. Equation 5.1 can be written as , which is a power law equation. In EXCEL, a plot of p versus v and a power law curve fit using TRENDLINE will disclose n.

2. Equation 5.6 (subsequently developed) may be used with only two states to determine n.

Here is the outline of the development of Equation 5.6. We start with , which also can be expressed as and combine this with the ideal gas law to obtain

The temperatures and pressures in Equation 5.6 are all absolute and the subscripts 1 and 2 represent the initial and final states.

1. Pressure and temperature data are provided for all three runs in “Experiment 5 Data.xls.” Use the ideal gas law, pv = RT, to compute v corresponding to each p. Use SI units: m3/kg for v and Pa for p.

2. Plot p versus v and find n:
For each run, on a separate graph, plot p [on the ordinate (vertical) axis] versus v [on the abscissa (horizontal) axis]. Use linear scales. Determine the polytropic exponent n for each run using a TRENDLINE power curve fit. Also find the correlation coefficient for each curve. (Be aware that the TRENDLINE power curve fit will give , where y = p, x = v and a and b are constants.) Plot all three runs on a single graph and find n for the combined data.

4. Find n for each run using Equation 5.6, where states 1 and 2 represent the beginning and ending states, respectively.

5. In a single table show all of the n values.

6. Discuss the meaning of your n values, that is, how does your n value compare with n values for other, known processes? 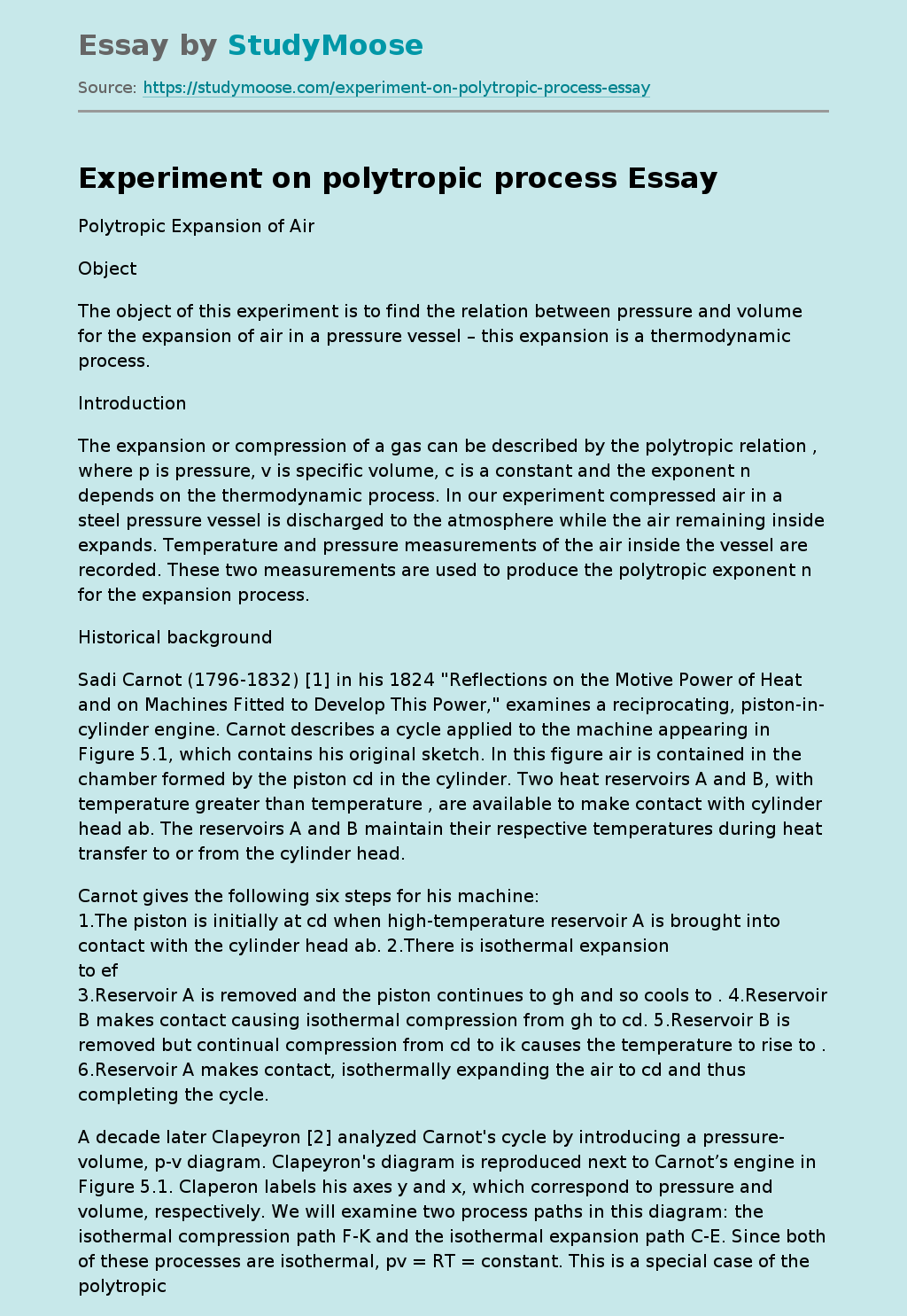