Evolution of Advertising in Nigeria

The Nigeria Advertising had its humble beginning rooted in colonial history, advertising development could be traced to about 1928 with the birth of West African Publicity Limited. An off shoot of UAC, the company was set up to cater for the marketing activities of the colonial masters in both Nigeria and West Africa. This company was later to transform to a full fledged advertising firm in 1929 known as Lintas with two other subsidiaries newly Afro media, the outdoor medium and Pearl/Dean, the cinema arm.

Turn in your highest-quality paper
Get a qualified writer to help you with
“ Evolution of Advertising in Nigeria ”
Get high-quality paper
NEW! AI matching with writer

With the setting up of the companies then headed by expatriates, the companies were to enjoy a monopoly for a long time to come it was not until 1950’s when other advertising agencies started to emerge on the scene. Ogilvy, Benson and Martha (OBM) and Grant were later to join the fray to form the big three in the industry.

The medium of advertising was in its infancy in those days Federal Government owned National Broadcasting Corporation (NBC) where he only television stations that operated in the four regions of East, West, North and later Midwest.

These regions later set up their private stations pioneered by the West, at Ibadan, prior to independence. In 1960 and 1962 respectively, Enugu and Kaduna followed suit. And with the creation of more regions by the General Yakubu Gowon (rtd) administration and creation of more states by both Alhaji Shehu Shagari and Ibrahim Babangida regimes, more state government-owned television and radio stations were established.

Daily Times, Express, Tribune, New Nigeria and Sketch were among the fore-runners in newspaper publishing.

Between the early 1960’s and 1970, there was no spectacular development in the industry. But the promulgation of Nigeria Enterprises as promotion Decree of 1972 popularly known as Indigenization policy urshed in a new phase in the industry. The policy transformed key positions in corporate organisations to indigenes. Mr Silvester, Muoemeka was by the dictates of the policy to emerge the first indigenous chief executive of Lintas. Lintas further empowered more Nigerians to take up the business of advertising some of whom had to leave broadcasting to embrace the new thinking.

By the later 1970’s however, two ambitious agencies, Rosabel Advertising and Insight Communication, sprang up. The coming of the two agencies which till today are still doing very well, no doubt, was a watershed in the industry of advertising in Nigeria as the agencies brought new ideas into the industry while taking creativity to a higher. Before the turn of the decade, 23 agencies had been formed.

With the steady growth in the number of practitioners and agencies arose the need for associations to be formed to advance their common interests and a regulatory body to that would regulate and standardize advertising practice. A meeting of the agencies held at Ebute Metta, Lagos in 1971 was to metamorphose into Association of Advertising Practitioners of Nigeria (AAPN) with the objective of Protecting practitioners against unfavourable business.

The association was later renamed Association of Advertising Agencies of Nigeria. As the industry continued to grow in volume of business and complexity, more and more people were attracted to the industry. The need to establish an institution to regulate advertising practice became apparent. This gave rise to the establishment of Advertising Parishioners Council of Nigeria (APCON) by Decree 55 of 1988, later renamed Act 55 of 1988 by the civilian administration on November 1989, the first meeting of the association held somewhere in Ebute-meta, Lagos finally culminated.

APCON started operation in 1990 with the employment of the pioneer registrar in the person of Dr Charles Okigbo. The era of economic restructuring and liberalization opened up the Nigerian business to global economy. Foreign investments started flowing into the economy the expatriates who once left the shores of the land due to the indigenization policy gradually returned. And with them, the boom in economy. Aside, privatization of mass communication medium in the 1990’s also witnessed the setting up of private owned media houses which are platforms for advertisement placements.

“But in the 1990’s the sector came alive. Not only that alarming and ambitions agencies such as Prima Garnet, Sotu and Caesars sprang up, the sector began to expand beyond advertising as full services public relation firms such as the Quadrant JSP and Quest were established. Also the era witnessed the mad rush of foreign affiliations. While some agencies sought this affiliation to help boost their human capital, others just joined the bandwagon just to feel among.” As the business expanded, related services providers joined the fray to cash in on the boom. Not long after they formed themselves into association to also further heir cause and protect their interest. Media Independent Practitioners Association of Nigeria (ADVAN), outdoor Advertising Association of Nigeria (OAAN) emerged. Not long the industry became an all corners affairs.

Competition became very stiff and practitioners started adopting unwholesome means to undercut one another. Industry debt became a major issue to the extent that it attracted the attention of past federal government who encouraged the practitioners to find a way of resolving the perennial problem. Just as competition continued to get stiff, agencies did not rest on their oars as they embarked on training of their staff who will be able to meet the challenge of modern day advertising. As creativity took centre stage, the industry witnessed a lot of innovation and creative ideas. The foreigners who started coming back brought with them standard and professional which changed the advertising landscape. Restructuring, training and brand building and creativity have taken centre stage.

Evolution of Advertising in Nigeria. (2016, Mar 27). Retrieved from https://studymoose.com/evolution-of-advertising-in-nigeria-essay 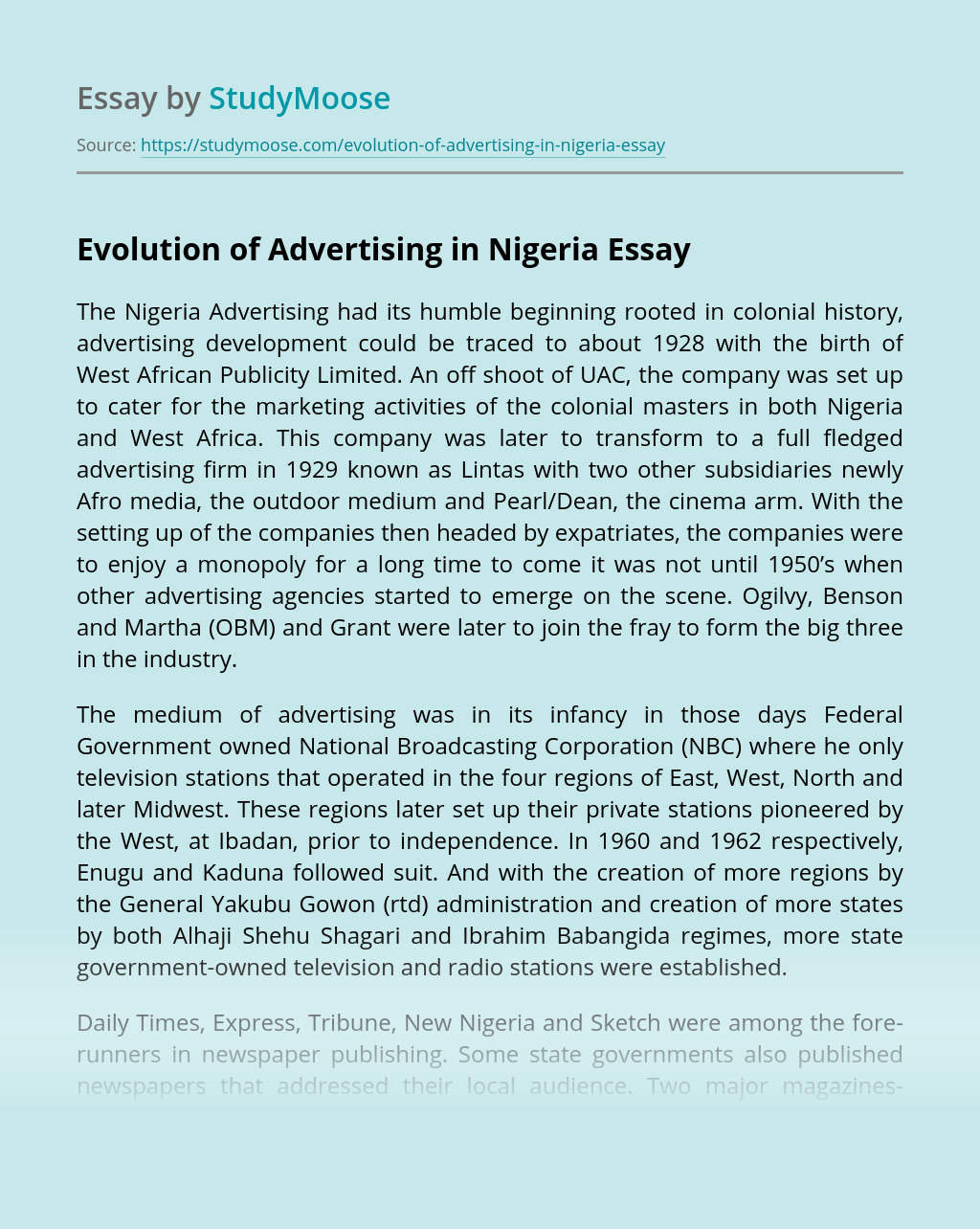 Turn in your highest-quality paper
Get a qualified writer to help you with
“ Evolution of Advertising in Nigeria ”
Get high-quality paper
Helping students since 2015
Stay Safe, Stay Original