The medical field is an area of business that often involves ethical dilemmas. These range from interactions with the patients, to cases where the healthcare system hides information from the general public that would present a bad image for themselves.

An ethical dilemma presented in medicine is forced chemotherapy on patients. Although it is not a very common issue, it still exists. It is an issue involving the distrust of authority, which may be irrational in some cases but also the misuse of power by influence.

Don't use plagiarized sources. Get your custom essay on
“ Ethical Dilemma in Chemotherapy ”
Get custom paper
NEW! smart matching with writer

Cassandra C. was a 17-year-old girl residing in Connecticut who decided to reject further chemotherapy to treat her Hodgkin’s Lymphoma (Ruth Macklin, 2015). The choice that she made presents an ethical dilemma with two conflicts. There are two moral principles involved. One is that an individual has the right to self-determination. This principle means the patient has the right to refuse medical treatment, even if it is life-saving. The other principle is that hospitals and their faculty have to provide the best care for patients, boosting benefits while minimizing harm.

Proficient in: Ethical Dilemma You Have Faced

The major complication was that Cassandra was legally a minor when she made her decision, so a parent would have to make the decision (Joyce Frieden, 2015). Cassandra’s mother did not have any discrepancies with the daughter’s rejection of treatment. Sometimes, patients and their parents don’t agree with the medical treatment/decisions. Courts are still allowed to overrule parents when the medical decision made is endangering the life of the offspring. The Connecticut Supreme Court decided that Cassandra had to accept chemotherapy treatment.

However, the mother and daughter’s lawyers tried to have Cassandra considered a ‘mature minor,’ which would allow her to refuse the treatment. The court did not side with this because medical judgment shows an 85% chance of surviving Hodgkin’s lymphoma through chemotherapy. A neonatal ethics committee at the Albert Einstein College of Medicine determined that ‘Parents are presumed to be the decision-makers for their children unless their decision is clearly against the best interest of the child (Frieden, 2015).’ The committee decided this should be upheld for parents making medical decisions regarding infants, but the question arises about teenagers and whether they can judge for themselves.

The decisions made by the patient, her parents, the hospital, and the court are questionable (Macklin, 2015). If the treatment was just one-time, although possibly painful, but providing more benefit than harm, then forceful treatment would be beneficial. However, chemotherapy causes extreme discomfort and can last up to six months. Cassandra was placed in a foster home after her mother refused chemotherapy and was confined in a hospital room. Although Cassandra was legally a minor, the actions of the hospital, doctors, and courts of Connecticut are not ethically justified. Children under the age of seven don’t have the mental capacity to make decisions, but children over fourteen have the capability. Cassandra was forced to accept medical treatment and was strapped down in a hospital while being sedated (Freiden, 2015). Although the primary reason for forcefully administering the chemotherapy was to get rid of cancer, broader implications might suggest a monetary benefit for the hospital. However, it seems unreasonable that Cassandra thought that the treatment was poison since the treatment was administered for a short time and had high success rates (Frieden, 2015). Individuals such as physicians who support forcing treatment on young patients must consider the measures they might have to go to, as done in this case.

Regarding ethical issues between business and society, chemotherapy is established as a drug treatment that is effective in patients that have cancer, having saved thousands of lives (Riccardo Gionvanniello, 2019). It is not a potentially dangerous product being tested on animals, which would raise an ethical dilemma. It is unlikely that the hospital treating Cassandra forced her to undergo chemotherapy for monetary benefit. She was made known of the effects of the treatment. In respect to the hospital, it would be better to treat the patient saving her life rather than her dying because they didn’t administer the drug. This would present a bad reputation for the hospital and its shareholders. These dilemmas could be represented in many other ways, such as business marketing. If the dangers of a particular product weren’t made known to the buyers, an ethical dilemma would be presented, or if a company sold products using cheaper materials to buyers while claiming that they were using high-quality materials an intracompany ethical dilemma would be displayed.

Ethical dilemmas are present in many work fields, and medicine is just one of many. These dilemmas affect companies, stakeholders, laborers, and consumers (or patients in the medical area). Consumers or companies can present ethical dilemmas. 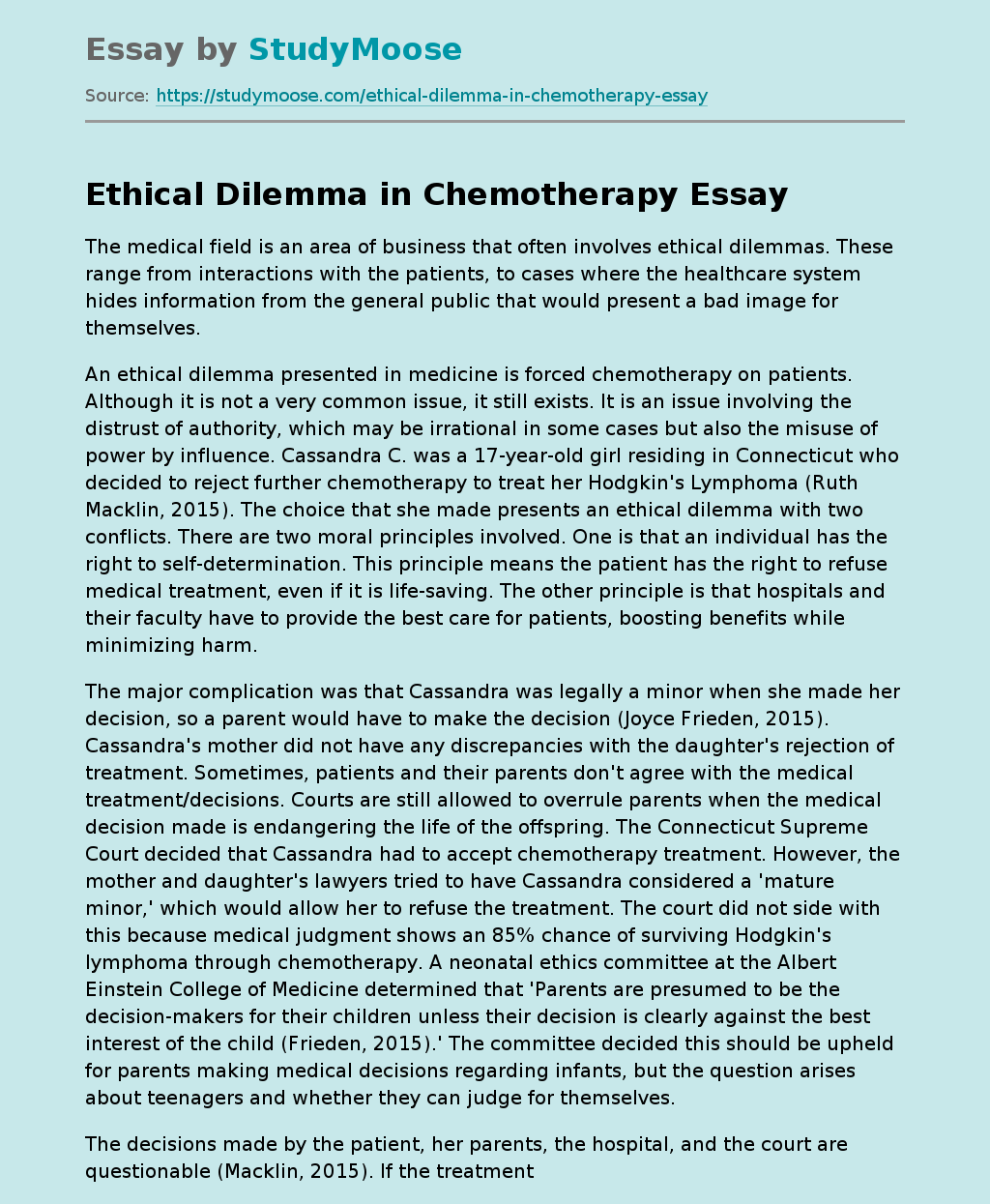