John Dalton’s atomic theory states that elements combine in simple numerical ratios to form compounds. A compound, no matter how it is formed, always contains the same elements in the same proportion by weight. The law of mass conservation states that mass can neither be created nor destroyed. In this experiment, the mass of the metal was not destroyed or created; the metal’s mass was simply changed into a compound form once the gas reacted to it.

The molecular formula represents the number of all elements in a compound. The empirical is the simplest whole-number ratio of the elements in that compound.

Combustion reactions always involve oxygen and are almost always exothermic. Exothermic reactions give off energy in heat form. The purpose of this experiment is to find the empirical formula of a compound using whole numbers.

To investigate this experiment, the masses of the metal and gas were measured to obtain the empirical formula of the compound.

To prepare for the experiment, the ring clamp was attached to the stand at about 2/3s the way up the stand.

In order to have magnesium oxide, MgO, the magnesium strip had to be heated. Under normal circumstances, room temperature, magnesium metal, Mg, reacts very slowly with the oxygen, O, in the air. However, as magnesium is heated, it reacts quicker with the oxygen and burns with a white light to produce MgO.

To protect others from the smoke, containing Magnesium Oxide, the crucible had to remain covered. Some magnesium oxide escaped, when the crucible was not covered. The crucible had to be slightly ajar when heating up the magnesium, so that oxygen could get to the reaction. Without oxygen, a fire cannot exist. The shininess of the metal Mg turned to a dull appearance as it changed to MgO. As the magnesium reacted to the oxygen, it also reacted with the nitrogen in the air to form magnesium nitride, Mg3N2.

To expel the nitrogen from the crucible, we added water to the mixture and heated it up. This would cause the Mg3N2, to react with the water, H2O, to form ammonia, NH3, and magnesium hydroxide, Mg(OH)2. The NH3 was driven off during the heating. One sign of this reaction was the ammonia smell given off. This is because upon heating, the Mg(OH)2 would break into MgO and H2O, which would be driven off by the heat. The second reheating was so that any remnants of the Mg(OH)2 of the crucible had been converted to MgO. This was also to have an accurate final mass of our product MgO.

After the lab, the inside of the crucible was black. This is because the magnesium not only reacted with the oxygen and the nitrogen in the air but also with the porcelain of the crucible. The reason for waiting for the crucible to cool before weighing it was because at higher temperatures, the molecules inside are still active, causing the weight to be off. During Trial 2, the magnesium was not properly burned off and caused the calculations to be off. The magnesium looked as if it had stopped glowing, but the inside coil was not completely burned. 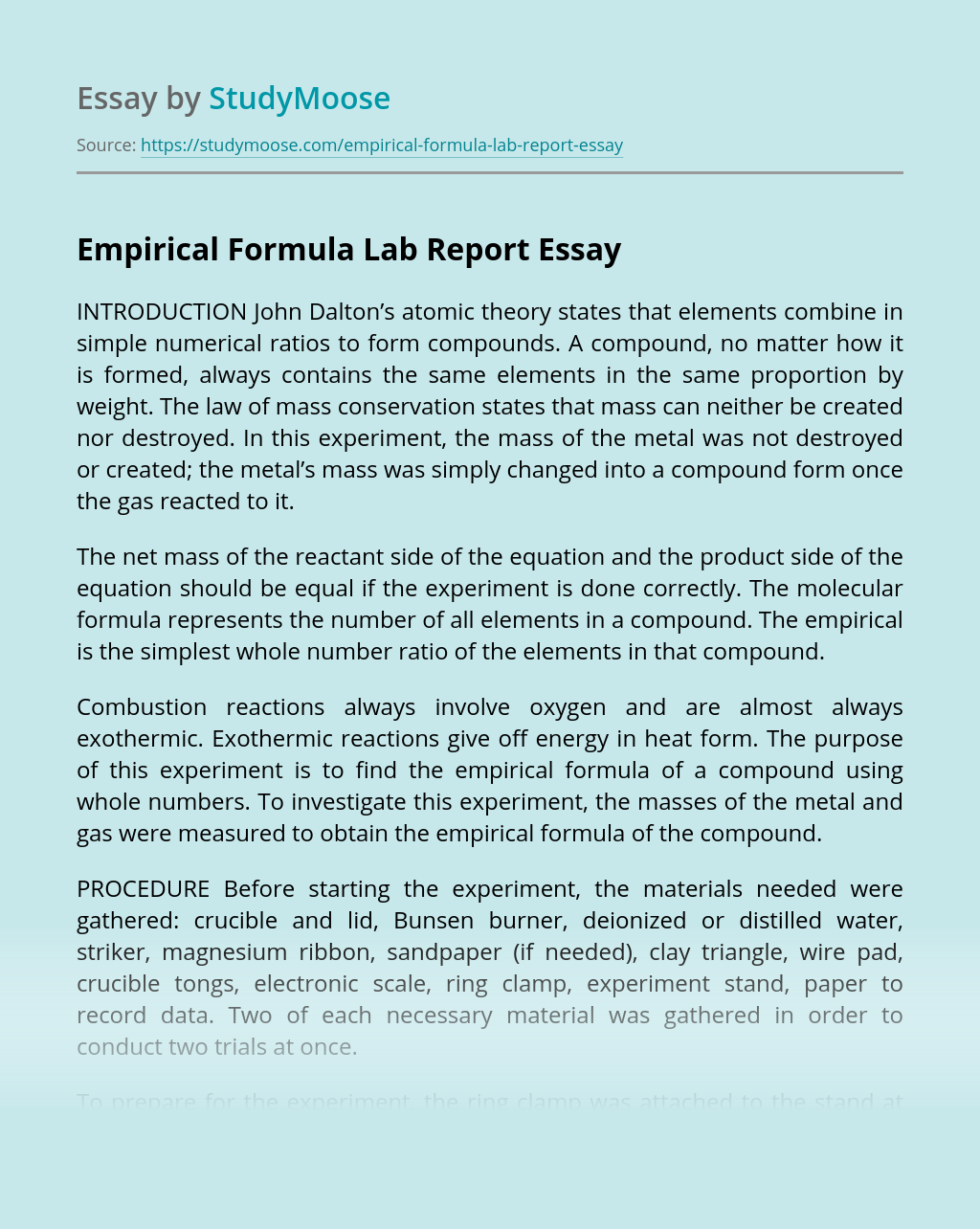