Emotions are personal experiences that are hard wired into every single human being on the planet. Yet, somehow people seem to have little control over them. After studying all the different kinds of emotions people can feel, I did a three day inventory of the emotions I experienced. In this paper, I will discuss how hard or easy it is to identify emotions and the methods I used to identify my emotions. I will analyze the types of emotions I felt and whether they were primary or secondary.

Don't use plagiarized sources.
Get Your Custom Essay on Emotions Paper Just from $13,9/Page

Were they the typical emotions I experience every day? Do I give in to any emotional fallacies? How freely I express my emotions and what I have learned from doing this exercise. During the three day inventory, I sometimes had a hard time identifying the emotion I was feeling. I often had to refer back to the list of different emotions.

While I looked at the list of emotions, I tried to think about what I was feeling physiologically during that time.

I examined my actions nonverbally and then cognitively I put a label on the emotion. For example, on the first day of my inventory I got woken up before eight in the morning by uncertain noises coming from my bathroom. When I opened the door to the bathroom, I found both of my kids laughing and splashing in the toilet using a toilet brush. The first emotion I realized I felt at the time was annoyance that somebody woke me up so early. I recognized that due to cognitive interpretation. The second emotion I felt after opening the door to the bathroom was anger at my kids for playing in my bathroom even though they know better. I cognitively new it was anger because nonverbally I raised my voice, physiologically my heart rate and breathing increased, and after I punished them I realized my hands were shaking. All of those signs led me to believe that I was annoyed and angry.

Within three days I experienced eleven different emotions. Five of those emotions were primary and six of the emotions were secondary. Determination, one of the secondary emotions I experienced was facilitative, because being determined made me want to try harder to finish the task I was doing. For example, when I was trying to do homework with my kids I was determined to get it done, so I kept going until it was completed. Fear and anger were two emotions I experienced that are debilitative because I had a hard time controlling my rational behavior. For example, I experienced fear because a huge dog was loose at the park. For a minute I just froze and stared at it, not doing anything until my son saw it and started screaming.

That got me to start thinking again and we left the park. The emotion of fear became debilitative for me because the dog was loose with no owner. If the dog was loose but had somebody with him my emotion of fear wouldn’t have been as intense. To my surprise the emotions I experienced in the three days were mostly intense. Out of the eleven emotions I experienced, only three were mild. For example, on day one I felt happy about taking the kids to grandpa’s house, but I wasn’t so excited that I was jumping up and down. It was a mild happiness. An example of my intense emotion is when I got angry. On day one in the evening of day one my kids would not listen when told multiple times to pick up their toys. It got to the point that I raised my voice at them and my hands started shaking. Then I had to call my husband to intervene because I needed time to calm down.

The emotions I experienced during the inventory were mostly typical. However, there were a couple of emotions that I don’t experience often. One of the emotions I don’t usually experience is being exhausted. Typically, I don’t feel exhausted, especially in the afternoon. After examining why I felt that way I realized it’s because I was starting to get sick. The next day, I felt another emotion I typically don’t feel or experience often. I was trying to do homework and I felt miserable because I was nauseas and I had a fever. Typically, when I do homework I feel motivated or excited that I am almost done. That same day in the evening I felt helpless which is also out of the ordinary for me. I felt that way because I had a ton of stuff I needed to do and I couldn’t do any of it. My typical emotions during the day are happy, irritated, annoyed, proud, loved, determined, scared, and excited.

Studying the subject of emotions and doing this inventory made me realize I have some fallacies I tend to fall into almost every day. The first fallacy that applies to me is “fallacy of approval.” For example, when I go somewhere with my kids or husband and I have to choose what I am going to wear. I realized that a lot of the time it takes me up to an hour to decide because I want people to approve of what I am wearing. The other fallacy that applies to me is “fallacy of causation.” For example, when my kids are playing the noise they make sometimes irritates me, because I want it to be quiet in the house. So, I say to them “you guys are irritating me,” instead of taking responsibility and saying “I am getting irritated with the loud noise.”

Doing this exercise has taught me that there are different kinds of emotions. Primary emotions are emotions that are hard wired into human beings, and secondary emotions make up primary emotions. I learned how to analyze what emotion I am feeling. I don’t think I have ever done that consciously before. It made me really think about my reactions, what’s happening in my body, and how I am feeling. I learned the valence of emotion. One emotion that you would usually think is negative can be both positive and negative. Also, I learned the word fallacy and how it relates to emotions. Last, I learned the difference between emotion and mood which I before I thought was the same thing. 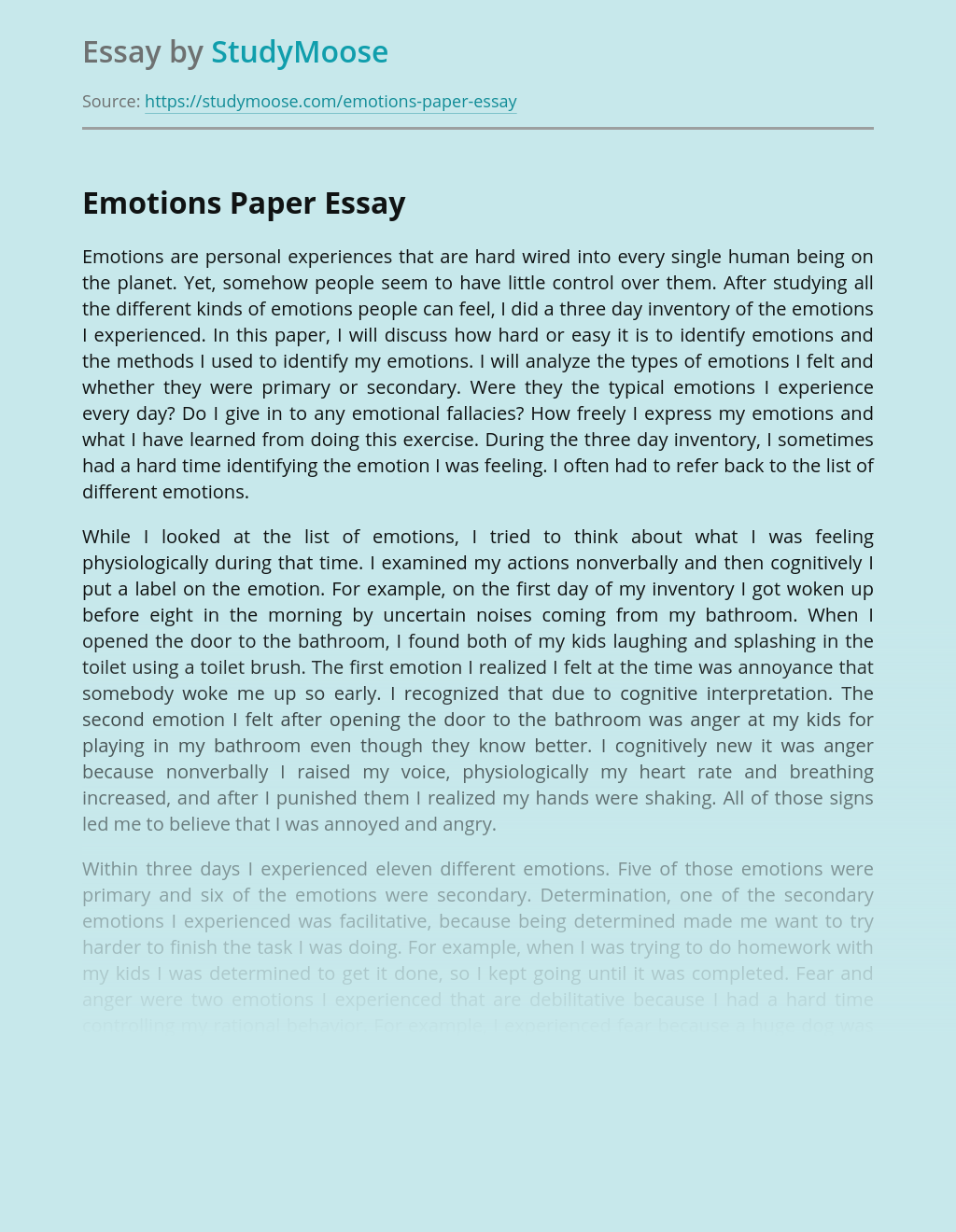 Can we trust our emotions in the pursuit of knowledge

I feel that knowledge is learning or feeling something that you didn’t know before. The pursuit of knowledge comes through sheer experience. Knowledge surpasses formal schooling. Schooling is educational but neither textbook nor teacher can allow one to experience knowledge that is experienced when on a journey, a journey to explore new things. With emotion...

Losing someone or something we love is very painful. We may experience all kinds of difficult emotions and it may feel like the sadness will never let up. These are normal reactions to a significant loss. But while there is no right or wrong way to grieve —there are healthy ways to cope with the...

Get Essay
Change - Analysis of 'Growing Old' by Matthew Arnold

Growing OldWhat is it to grow old?Is it to lose the glory of the form,The lustre of the eye?Is it for beauty to forego her wreath?Yes, but not for this alone. Is it to feel our strength -Not our bloom only, but our strength -decay?Is it to feel each limbGrow stiffer, every function less exact,Each...

Definition paper on the word "Strength"

Strength is more then just a physical word. It is a word of high stature. Strength can be used in three ways; physical, mental, and spiritual. Strength is the quality of being physically strong, capacity to sustain the application of force without yielding or breaking, effectiveness, and concentration. Strength is a word that is a...

A Ghost Story No Angel by Bernie McGill