Elon Musk Breaks Down His Plan for Mars in Reddit AMA

Last month, SpaceX founder and CEO Elon Musk spoke at the International Astronautical Congress in Guadalajara, Mexico, about his to get humans to Mars, and beyond possibly starting as early as 2024.

Though the cost is high — $10 billion to make the Interplanetary Transport System (ITS) and $500,000 to get a seat on the ship — not to mention the inherent danger of traveling to and aiming to live on another planet, Musk is characteristically undeterred in achieving his goal, and took to Reddit over the weekend for an to answer any questions people might have about becoming a "spacefaring civ.

Don't use plagiarized sources. Get your custom essay on
“ Elon Musk Breaks Down His Plan for Mars in Reddit AMA ”
Get custom paper
NEW! smart matching with writer

Most of his answers were focused on the logistics, mechanics and minutia involved in building the rockets. He revealed that he anticipates releasing details and mockups about the habitable passenger portion of the ship within the next couple of years.

When asked if there was any aspect of the technology that SpaceX had "nailed down" thus far, Musk answered, "not sure that we've really mastered anything yet.

He also broke down his plan for building up a sustainable city on Mars. The first step is sending Dragon rockets on scouting missions "to figure out the best way to get water for the CH4/O2 Sabatier Reaction." The Heart of Gold spaceship will go to Mars with the tools and equipment to set up the fuel plant. A crewed mission will follow to assemble the base and the plant and the last step is "to try to double the number of flights with each Earth-Mars orbital rendezvous, which is every 26 months, until the city can grow by itself.

In talking about the specs of the 42 engines of the reusable ITS rocket, Musk revealed himself to be a fan of the late science fiction writer Douglas Adams when he joked that "it had to be 42 for important scientific and fictional reasons," before getting down to specifics. In Adams’ The Hitchhikers' Guide to the Galaxy, 42 is discovered to be the answer to "what is the meaning of life?"

Elon Musk Breaks Down His Plan for Mars in Reddit AMA. (2020, Jun 02). Retrieved from https://studymoose.com/elon-musk-breaks-down-his-plan-for-mars-in-reddit-ama-new-essay 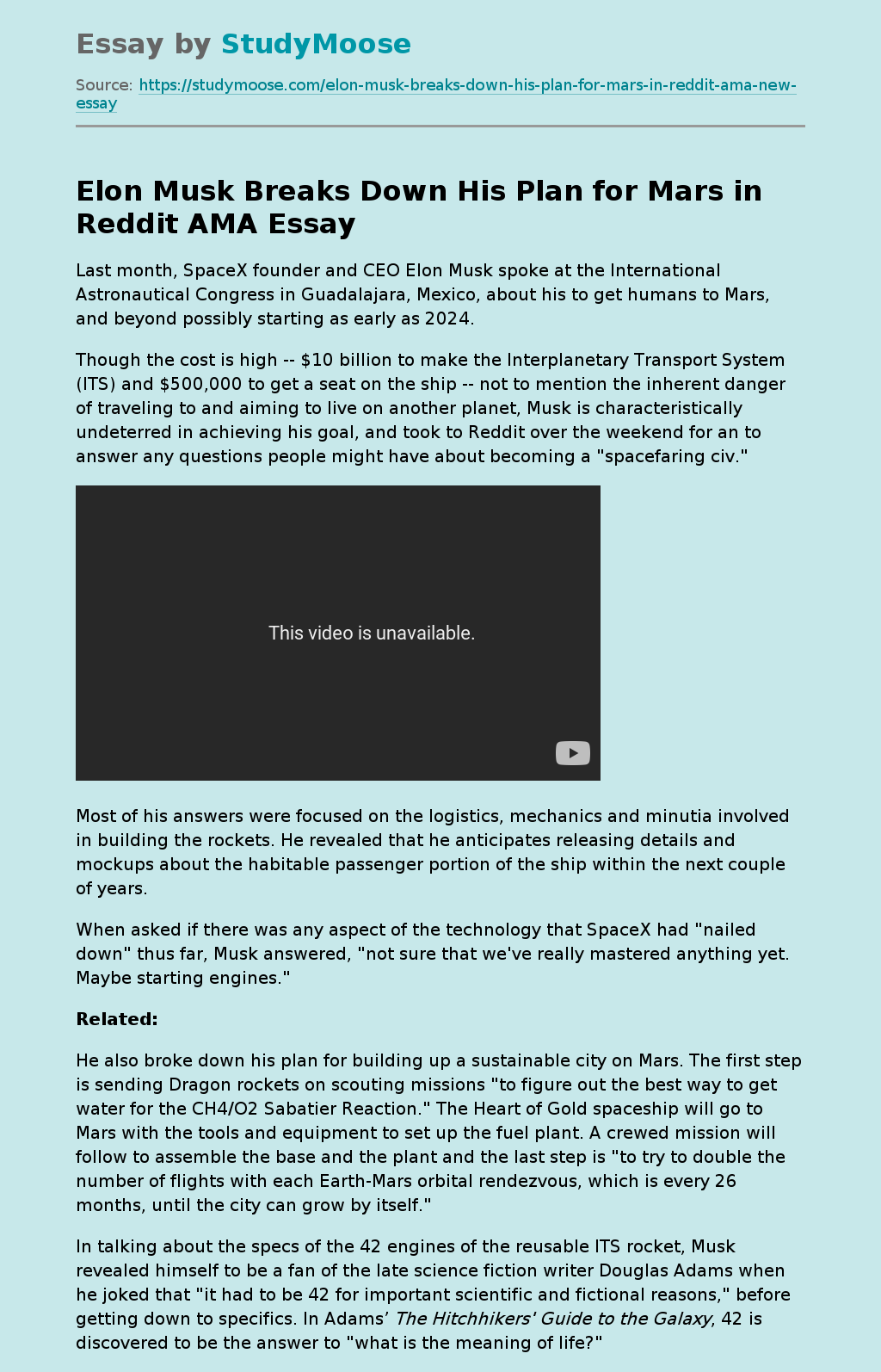