Demerits of Land Expropriation Without Compensation on Fiscal Policy Goal

According to an independent economic impact assessment of the proposal policy, Land expropriation without compensation in South Africa will lead to an imminent socio economic disaster if pursued, with an anticipated decline in the Gross Domestic Product which could possibly lead to a loss of a greater degree of jobs close to 2.28 million. If expropriation without compensation was adopted this would’ve resulted in extreme economic hardships for South Africa, a deterioration of the country’s sovereign bonds to junk status, increased interest rates, a deep depression and a sharp decline in taxation revenues.

Don't use plagiarized sources. Get your custom essay on
“ Demerits of Land Expropriation Without Compensation on Fiscal Policy Goal ”
Get custom paper
NEW! smart matching with writer

Land expropriation without compensation poses a threat on the economy and also fundamental freedom of private rights. There is a direct relationship between fixed investments and economic growth. Gross fixed capital formation is important for economic growth, without which the likelihood of lowering unemployment and poverty levels is not possible.

Clarity is needed when coming to expropriation without compensation and property rights in general.

Fixed investment as a percentage of GDP is at a lower level now than 5 year back, which is one of SA’s biggest challenge because it will mean less jobs are created(Schussler,2019). Without any economic growth the prospect of lowering unemployment are relatively low. Agriculture was identified by the National Development Plan as one of the critical sectors for economic development which has the potential to produce one million jobs by 2030 but with the uncertainty regarding land, the target might not materialise. Expropriation without compensation is likely to change the trend of capital investment agricultural sector recorded at R427, 790 m, in which land and fixed investment constituted 54.

1%. This will then lead to sector regression, and productivity will be compromised and job losses will then occur.

Expropriation without compensation has the worst effect on general prices in the economy. The ever changing prices that are affiliated to everything is a result of countless and unknowable interaction between economic agents. To establish Capital investments property rights are inherently required. A change by the government action in one set of prices will lead to other prices having to adjust to allow market to reach a new equilibrium.

Farmers are less likely to maintain or expand irrigation, build more storage facilities or purchase new tractors or harvest if they realise that they may lose their land. Banks are less likely to extend loans when they realise that their clients may lose their collateral. With risk of losing their capital investments potential foreign investors are most likely to look elsewhere to invest. The most evident consequence is a deterioration in agricultural productivity and output, which would have a damaging effect on the economy from higher prices on food, and increased rural unemployment to a bigger balance of payment deficit. If expropriation without compensation is not implemented correctly it will lead to a lose in agricultural export which will damage the balance of payment.

A Social Acceptable DiStribution of Income

A shrinking agriculture could be accompanied by increased food prices, which will make the poor even poorer than the middle-income and wealthier people of the country, and as we know that the poor spend a larger portion of their income on food than wealthier people. South African should give up foreign exchange in order to import raw materials that go into the production of the food we eat and process them in South Africa.

5 Recommendations on How SA Can Address Land Expropriation Better 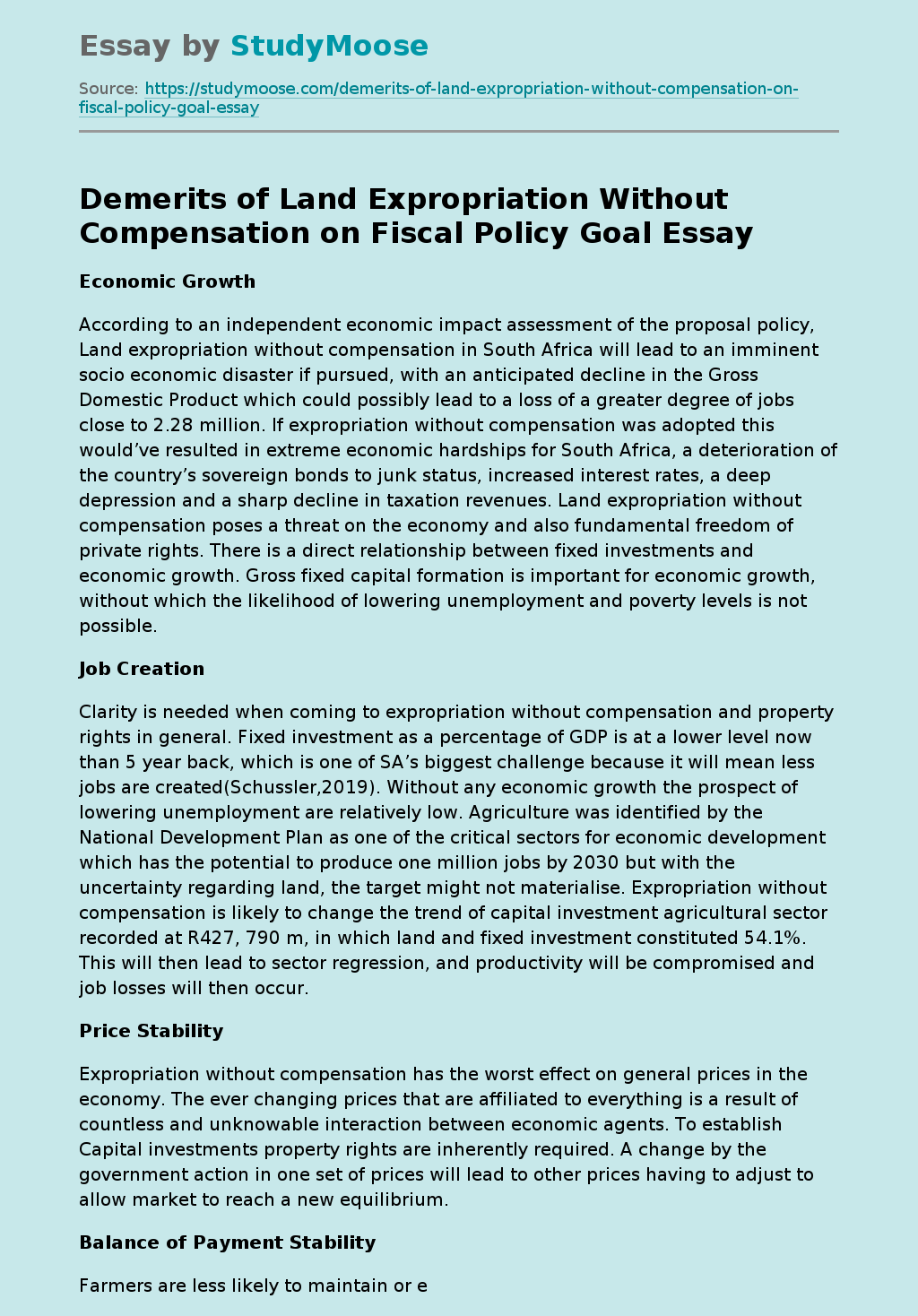