The word dementia describes a set of symptoms that may include memory loss and difficulties with thinking, problem solving or language. These changes are often small to start with but for someone with dementia they have become severe enough to effect daily life. A person with dementia may also experience changes in their mood or behaviour.

The key functions of the brain that are affected by dementia

Delirium, Dementia and Depression are disorders that are often confused by care-givers as they are complex and patients can be afflicted with more than one of the conditions at the same time. Although often coincidence they are entirely separate conditions.

Delirium is an acute but reversible state of confusion occurring in up to 50 percent of older post-surgical patients. Dementia is an irreversible decline of mental abilities which affects 5-10 percent of the population over age 65, with incidence doubling every 5 years after 65.

Depression is a mood disorder which affects 16 percent of the population although it is often unrecognised.

The medical model focuses on the impairment as the problem and focuses on a cure, these may be dependency, restriction of choice, disempowering and devaluing individuals.

Why dementia should be viewed as a disability

Individuals who have dementia are not aware of requirements for living. They can forget to do the essential things that are vital. Taking medicines, hygiene and even eating are often forgotten. They can get lost or hurt and not understand what is necessary to correct a situation. Individuals cannot act in the manner of a responsible adult which is why dementia should be viewed as a disability.

The most common causes of dementia are:

Likely signs of the most common causes

Dementia is a collection of symptoms including memory loss, personality change, and impaired intellectual functions resulting from disease or trauma to the brain. These changes are not part of normal aging and are severe enough to impact daily living, independence, and relationships. With dementia, there will likely be noticeable decline in communication, learning, remembering, and problem solving. These changes may occur quickly or very slowly over time. The progression and outcome of dementia vary, but are largely determined by the type of dementia and which area of the brain is affected. Diagnosis is possible through advanced brain imaging, clinical examinations, and diagnostic testing.

Risk factors for the most common causes

The greatest known risk factor for Alzheimer’s is advancing age. Most individuals with the disease are age 65 or older. The likelihood of developing Alzheimer’s doubles about every five years after age 65. After age 85, the risk reaches nearly 50 percent. One of the greatest mysteries of Alzheimer’s disease is why risk rises so dramatically as we grow older. Another strong risk factor is family history. Those who have a parent, brother, sister or children with Alzheimer’s are more likely to develop the disease. The risk increases if more than one family member has the illness. When diseases tend to run in families, either heredity (genetics) or environmental factors, or both, may play a role. In general, the risk factors for vascular dementia are the same as those for heart disease and stroke. Risk factors for vascular dementia include: Increasing age. History of heart attack, stroke or mini strokes. Atherosclerosis. High cholesterol. High blood pressure. Diabetes. Smoking and Atrial fibrillation. Although the cause of Lewy body dementia isn’t clear, several factors appear to increase the risk of developing the disease. They include: Being older than 60. Being male & having a family member with Lewy body dementia.

Dementia is not a disease but a set of symptoms which decreases the ability to think, memory and communication skills of human beings. It also declines the skills that needed to carry out daily activities.

There are many causes of dementia. Few are:

Depending on the form of dementia people’s ability and disability fluctuates. It is not necessarily to think that people with dementia are always forgetful. Like, people with Fronto-temporal dementia are very less forgetful than Alzheimer disease. Their memory remains intact but their personality and behaviour noticeably changes.

Dementia with Lewy bodies interrupts the brain’s normal functioning and affect the person’s memory, concentration and speech skills. It has similar symptoms to Parkinson’s disease such as tremors, slowness of movement and speech difficulties. People with vascular dementia may suffer from incontinence or seizure where other types of dementia may not affect those. However level of ability and disability depend on individual’s age and condition of dementia. People who are living with dementia in earlier age such as 60’s-70’s are less dependable than people living with dementia at the age or over 70’s or 80’s. People have different stamina in different ages. So, their ability and disability fluctuated and level of support are varied as well.

Impact of others on an individual with dementia

Dementia can have a big impact on a person’s behaviour. It can make them feel anxious, lost, confused and frustrated. Although each person with dementia handles these feelings in their own way, certain behaviour is common in people with the disease. This includes:

If you are experiencing these behaviours, or are looking after someone who behaves in this way, it’s important to remember that this is an attempt to communicate how they’re feeling and that they are not being deliberately difficult. If you stay calm and work out why they’re expressing themselves in this way, you may be able to calm them down. 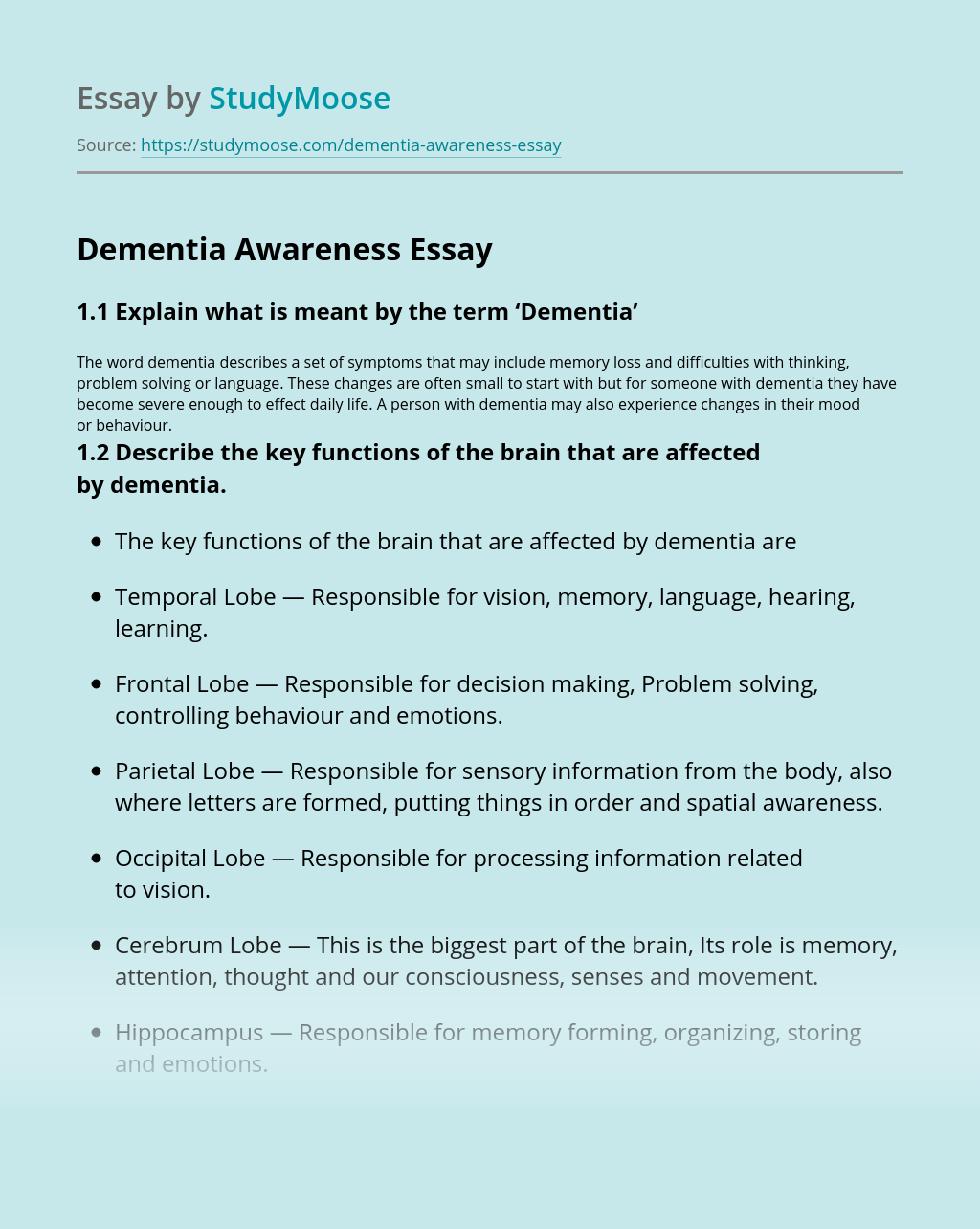 Turn in your highest-quality paper
Get a qualified writer to help you with
“ Dementia Awareness ”
Get high-quality paper
Helping students since 2015
Stay Safe, Stay Original