Damiana L. Eugenio, the mother of Philippine Folklore compiled and edited what may very well be considered as the most comprehensive collection of proverbs in our country. There is a limited number of works like this in existence. She spent a lifetime collecting pieces of folk literature that reveal our ancestors‘ wisdom. When she gathered proverbs from various areas in our country, she declared that our elders lived by simple, yet very meaningful rules of righteous living. In fact, she asserted that even the Spaniards who colonized our country noticed how proverbs formed part of the native spirit.

Don't use plagiarized sources. Get your custom essay on
“ Damiana Eugenio Proverbs ”
Get custom paper
NEW! smart matching with writer

Spanish missionaries were found to have translated such proverbs and other oral expressions in Spanish in order for their fellow religious people to learn our indigenous languages. By doing so, they were able to interact with the early Filipinos their and eventually introduce the Catholic faith. Proverbs are brief instructive expressions that suggest a specific action, behavior, or judgment. Referred to by some scholars as ―the wisdom of many and the wit of one‖, they are commonly written in the form of short assertions or poetic two-liners which have rhyme.

It is interesting to note that people are easily struck by proverbs when they are woven in conversations or writings. This is perhaps because they have the power to teach people the more essential truths about life and the complexity of living. Compared to lengthy narrations, descriptions, or argumentations, proverbs are able to effect quickly a change in view or disposition. In Filipino, proverbs are called salawikain or sawikain.

1. Proverbs expressing a general attitude towards life and the laws that govern life

Walang ligaya sa lupa na di dinilig ng luha. (Tagalog)
There is no earthly joy that is not watered with tears.

Ang kapalaran ko di ko man hanapin, dudulog lalapit kung talagang akin. (Tagalog) The good fortune which is intended for me will come even without my seeking it.

Dai mo pagpaagahan an magigibo mo ngonyan. (Bikol)
Do not put off for tomorrow what you can do for today.

Ayau mo in kahui pila‟a ha kawa‟an mo bunga. (Tausug)
Do not cut the tree to get the fruit.

3. Proverbs expressing a system of values

Isa ka tuig nga tiponon, isa ka takna wagwagon. (Hiligaynon) It takes only a moment to squander what took a year to save.

Ti saan a matimtemec, nauyong no macaunget. (Ilokano)
The quite person is slow to anger but terrible when aroused.

Ing mayap a babai, maiguit ya karing rubi. (Pampango)
A good woman is worth more than rubies.

Ang gugma sang tigulang daw igui nga nagakamang. (Hiligaynon) The love of an old man is like a snail that crawls.

Ako kanhi cabalyero nga wala‟y kabilinggan; pagdawat sa matrimonio, sa hinanali ng lawas mingniwang. (Cebuano) I was formerly a gentleman without a care at all, but when I got married, my body shrank and became small.

Kay tagal nanindahan, kabili-bili‟y balindang. (Tagalog)
After shopping for a long time, he ended up with a poor purchase.

Ing matudtud a pemangca e na balu lebasa‟ ng sapa. (Pampango) The sleeping boatman does not know the streams he has passed.

Mapipia nu sumavat ka a maysaosaod su sagap as canu caviden mu du calawangan q manalamad su among. (Ivatan) It is better to go home and weave a net than to stay on the shore and watch the fish.

Don‘t be too slow if there‘s only a little rice; don‘t be too shy if there‘s only a little viand. Our proverbs are not only witty expressions. They are also our cultural treasures. As we continue to use them in various spoken or written forms and as we explore ways of representing them in graphic, musical, or dramatic modes, we facilitate their preservation. And through these, we strengthen our identity as a people. 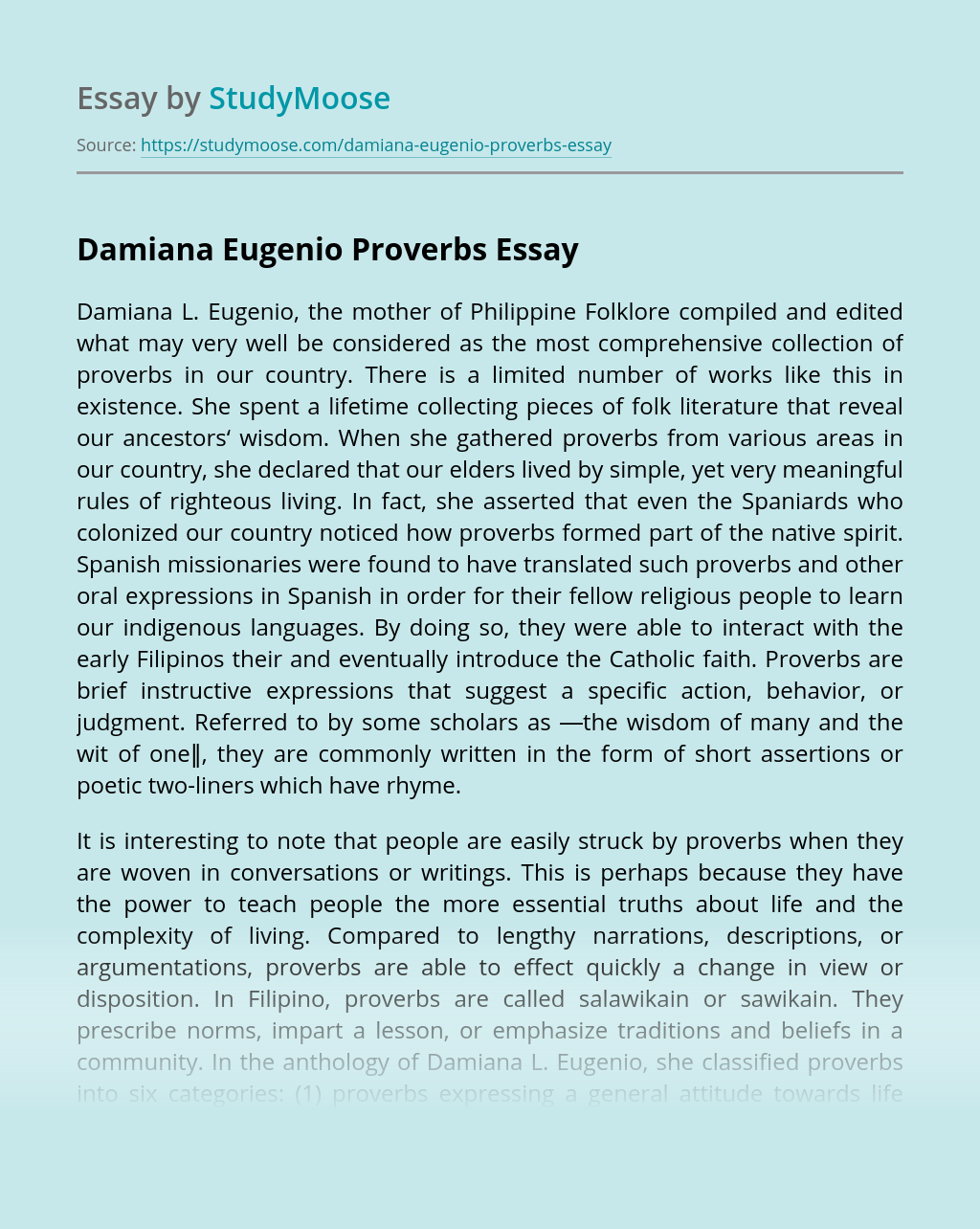