The juvenile justice system is a specific component of the judiciary that processes cases of youth aged 18 years and below accused of participation in delinquency or criminal acts. There exist multiple similarities between the system and the adult justice system, especially the mode of executing the process. The processes involved include arrest, detainment, petitions, hearings, adjudications, dispositions, placement, probation, and reentry. The application of the juvenile justice system embraces the fact that youth are different from adults in terms of responsibility and rehabilitation potential.

Don't use plagiarized sources. Get your custom essay on
“ Current Practice in the Juvenile Justice System ”
Get custom paper
NEW! smart matching with writer

In this context, it is essential that the characteristics and effectiveness of short- and long-term confinement facilities are outlined, the juvenile aftercare, and the evolution of juvenile correctional treatment from the mid-twentieth century to today.

The Characteristics and Effectiveness of Short and Long-Term Confinement Facilities

The short-term facility is mainly adopted to provide temporary care in a physically restricting setting for the juveniles in custody pending court disposition and those adjudicated to delinquent and awaiting transfer to another jurisdiction (McCarthy, Schiraldi & Shark, 2016). The facilities provide correctional measures and ensure that the youths access age-appropriate services. The local authorities who ran the short-term juvenile confinement facilities are obliged to provide security. There are no severe corrective programs incorporated in short-term services, indicating why many legislators have suggested its elimination.

The principal objective of the short term facility is to host the suspects as they await hearing or sentence (Schiraldi, Western & Bradner, 2015). However, it is worth noting that the juveniles are exposed to the rights of incarcerated youth comprising of right to assistance of counsel and the right to remain silent when questioned about involvement in criminal activity.

The long-term confinement facilities consist of boot camps, ranches, forestry camps, and training schools. In the United States, approximately two-thirds of the youth are held for longer than a month, a quarter for over six months, and almost 8% for more than a year (Mistrett & Thomas, 2017). The long-term facilities are the most common placement for the sentenced youths (McCarthy, Schiraldi & Shark, 2016). The facility aims to apply corrective measures to ensure that the youths refrain from criminal activities. The juveniles are mostly subjected to pepper spray, mechanical restraints, and solidarity confinement (Schiraldi, Western & Bradner, 2015). However, the minors are liable to incarceration rights such as rights to expression, the right to counsel, the right to confront and cross-examine adverse witnesses.

Juvenile aftercare refers to the reintegrative programs aiming to prepare juvenile offenders who have been either serving short-term or long-term confinement facilities back to the community. The primary objective of aftercare or reentry is to reduce the recidivism rate of juvenile offenders (Monahan, Steinberg & Piguero, 2015). Different states adopt diverse mechanisms in the process of releasing the youths from training schools. In most cases, the juveniles are released after the expiry of the confinement period (Walker et al., 2015). The judicial system might opt to release youths who portray a high sense of responsibility and appears to have reformed. The juvenile release might also occur the case is reviewed, and the convicted found not to be guilty. After the youths are released, appropriate measures should be adopted to ensure that the juveniles are adequately incorporated in society.

The critical issues involved in the formulation of aftercare decisions include determining the difference in the kind of facility the youth are leaving, the challenges associated with the return of the youth, the individuals to be involved in aftercare planning, the anticipated outcomes, and the federal initiatives (Monahan, Steinberg & Piguero, 2015). The essential aspects of facilitating promising juvenile care should focus on family relationships, mental health, substance abuse treatment, and social recreation. Such elements are principal in ensuring that a conducive environment is established for the juveniles to implement the learned corrective measures (Walker et al., 2015). The juveniles might face major shocks upon release to the community, such as the progress of their age mates in multiple aspects such as education (Monahan, Steinberg & Piguero, 2015). The failure of the family to intervene and the realization that the legal system is real might also be shocking to the juveniles. The community plays an essential role in determining the juvenile’s success after release. The process involves the perception of juveniles and their assistance towards the implementation of the adopted corrective measures (Walker et al., 2015). The youths are also liable to due process rights, which protects them from any activities interfering with their life, liberty, and possessions. Such rights are instrumental in protecting juveniles from any potential unlawful oppression or discrimination.

The juvenile correctional treatment process evolved in phases comprising of rehabilitation is not an appropriate stage, the nothing works stage, and some treatments work step, the numerous programs, and innovations work step. The rehabilitation is not a necessary stage was associated with violation of human values (Farn, 2018). The phase termed rehabilitation to be a disaster in practice indicating high criticism. The nothing works stage the juvenile correctional process was exposed to increased imperial criticism. The evolution persisted between the 1960s and early 1990s (Weber, Umpierre & Bilchik, 2018). Although society embraced the need for effectiveness in correctional treatment among juveniles, some individuals projected their opinions.

Some treatments work stage; the correctional strategies appeared to work effectively when the juveniles were subjected to amenable to treatment firstly. However, when dealing with less trained individuals, the programs were reported not to be productive. In the 1970s, it was decided that some treatment mechanisms have a considerable impact on recidivism (Weber, Umpierre & Bilchik, 2018). In the numerous programs and innovations work stage, much support is accorded to treatment, but supporter’s claim multiple modalities must be incorporated (Farn, 2018). The intensity of contact should be increased in various programs as well as more considerable attention to the offender’s needs and traits. The argument behind the phase is to match the juvenile’s needs characteristics with specific characteristics. The process has proven to be effective in transforming youths to become useful people in society.

The juvenile justice system is a broad field that addresses multiple aspects with the primary aim of preventing youthful participation in crime. The juvenile system evolved systematically up to date. The process also aims to apply effective corrective measures to juvenile offenders so that they can become useful people in society. The confinement process is composed of both the short and long-term. The short-term facility involves juveniles waiting to be sentenced or case hearing. Long-terms involves juveniles serving their sentence. After completion of the sentence, the youths are entitled to aftercare services to ensure that they fit appropriately in society. 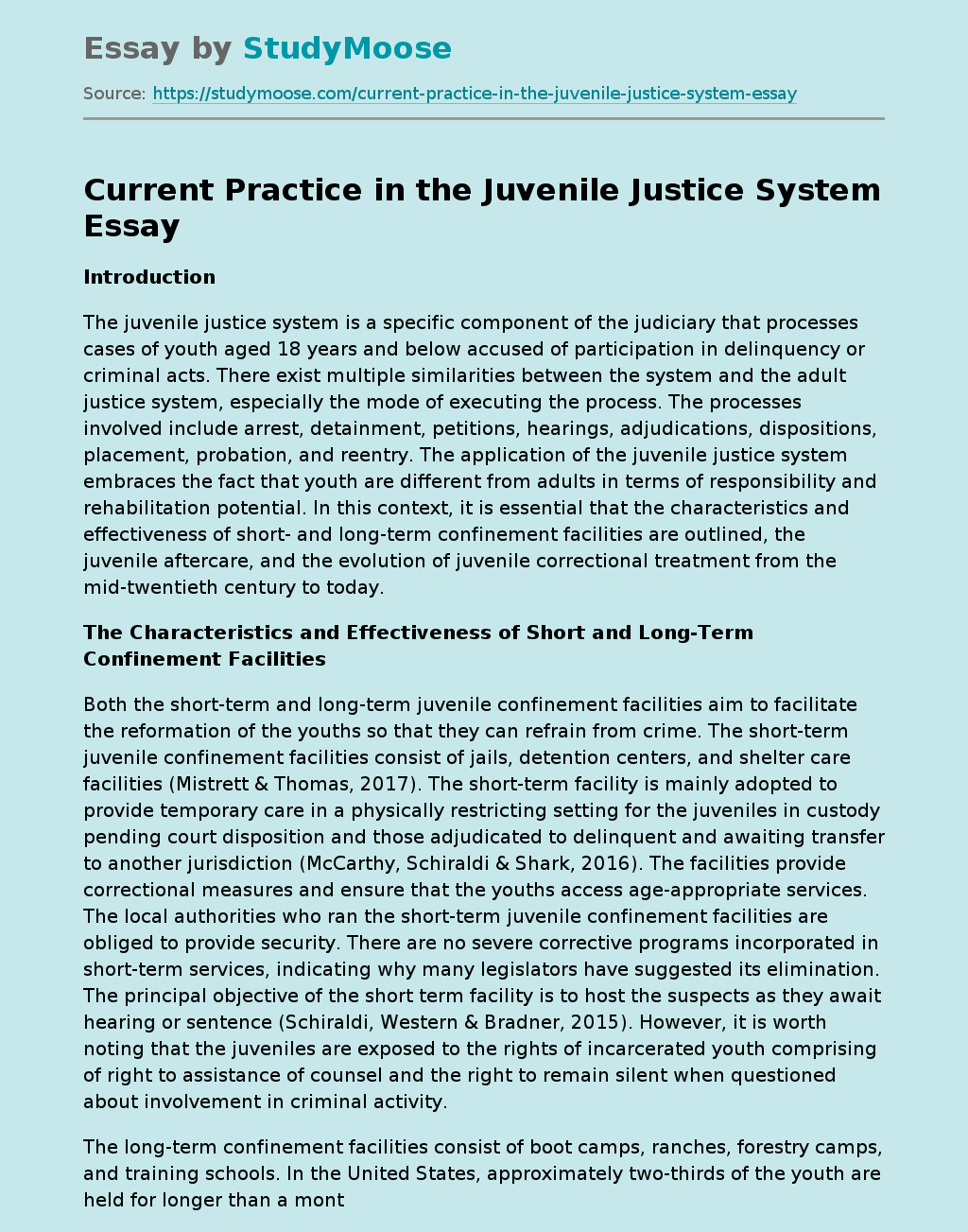