Critical Analysis Of ‘I Have A Dream’

Martin Luther King’s speech, ‘I have a Dream’ may be considered on two levels, and the first is on the level of its content. Supposing one did not hear the speech delivered and only read a transcript or a printed copy of the speech, it is surprising that many things work independently for the written form of the speech in the ability of the speech to persuade. One very glaring element that one easily notices is the presence of various figures of speech in the piece.

Don't use plagiarized sources. Get your custom essay on
“ Critical Analysis Of ‘I Have A Dream’ ”
Get custom paper
NEW! smart matching with writer

It is general knowledge that figures of speech are effective in conveying emotions that may not be easily obvious in what is being said but is tangibly felt because of the effect of these devices and their desired intention. For instance, metaphors are very effective in conveying a comparison in such a way that the reader will easily notice the contrast between an abstract idea and a concrete representation.

The speech is ridden with metaphors, hence, the lines, “the bank of justice is bankrupt” (King) the speech offers the image of justice being held in a bank and being disbursed to those who come for it, which in the case, are the Negroes who have come to listen to King’s speech.

This image is a very accurate metaphorical portrayal of reality because the image offered is one that allows the reader to come up with a material or tangible representation of the concept of justice, hence, making the abstract concept emotionally charged.

Other examples of effective metaphors are when King state, “The whirlwinds of revolt will continue to shake the foundations of our nation” (King) and “lift our nation from the quicksands of racial injustice to the solid rock of brotherhood.

” (King) In these two lines, King likens revolt to a whirlwind, injustice to quicksand, and brotherhood to solid rock. All these comparisons breathe an emotional life into the abstract concepts so that readers would feel the concepts instead of just think them.

Another very effective device used in the speech is allusion which encourages and propagates familiarity of the themes and emotions, hence, the line, “This sweltering summer of the Negro’s legitimate discontent” (King) which is an allusion to Shakespeare’s opening lines in the play ‘Richard II’ and the line, “drinking from the cup of bitterness and hatred” (King) which alludes to the Agony in the Garden of Gethsemane from the Bible. Here it is easily obvious that King uses familiarity as a tool to remind readers of the emotional embodiment of the statements.

Other than literary devices, the speech also uses enumeration or cataloguing in certain parts of the speech to run through facts and make a more authoritative or valid statement. Of course, other effective appeals that one finds upon reading the speech are its appeals to history, which is infallible, to the emotions of the reader, where the speech refers to certain situations like having separate bathrooms from whites and not being able to enter motels and hotels meant for whites, and appeals to intellect, where the speech questions the validity of certain truths.

The speech takes on a new life on its own when it is viewed as it is delivered by King himself. Other than the immense crowd that had gathered to hear King speak, one would easily notice that the speaker adapts certain speaking styles to deliver the speech effectively. One very obvious technique that one notices is the monotonous tone employed in most of the speech’s delivery; because there is large crowd assembled, a monotonous tone would make the speech clearer when listened to.

Hence, instead of employing rises and falls in tone, which the speaker utilizes towards the end of the speech, King uses a variation of speed when he slows down or speeds up to emphasis, but with little or no variation in tone. King maintains eye contact throughout the delivery by periodically glancing at the audience as he looks up from the copy of the speech that he reads. Authority is maintained by assuming a steady and steadfast posture that is reflected by raised yet relaxed shoulders.

King also makes periodical head movements to stress a point and this works quite effectively in the aspect of clarity. One very clear technique that King uses in the delivery, though, is the technique of strategic pauses and stops throughout the speech to convey a particular emotion – this is clearest in the parts where he expresses that Negroes will never be satisfied or when he enumerates the components of the Negro dream.

King sparsely uses gestures except at the culmination of the speech where he manages to make one or two arm gestures and at some points in the speech where he makes a weight shift from left to right leg and vice versa. In terms of facial expression, King maintains an almost ‘poker faced’ expression, perhaps to convey a certain degree of seriousness in his speech – at times he assumes an aggressive facial expression, maybe to convey a sense of urgency to those listening.

In this case, however, facial expressions would not be as effective because of the immensity of the crowd, which is why King uses more tonal and vocal variations. In relation to my own desire to be able to write a good speech and deliver it well, this particular speech teaches me to make full use of the devices of language available, but use these sparingly and effectively so that nothing in the content of will sound overdone or over acting.

Good content is determined also by the variety of data included, hence, it is always wise to draw from various authoritative sources as well as from history to make content more credible. In terms of delivery, King’s delivery tells me that I should, like using the various literary tools, also use various speaking techniques to deliver the adequate and accurate emotion desired to the listeners.

It does not mean that because gestures are an important part of elocution, they should be used always and at all times, because there are certain situations where facial expression and voice quality or volume is more important than gestures. King’s delivery also teaches me the value of speed in delivery and that varying the speed of what is being said actually creates surprising inflections and variations in the intensity of the emotion conveyed. ? Works Cited King, Martin Luther. “I Have a Dream. ” American Rhetoric. N. p. , 2007. Web. 23 Aug. 2010. <http://www. americanrhetoric. com/speeches/mlkihaveadream. htm>.

Critical Analysis Of ‘I Have A Dream’. (2016, Sep 22). Retrieved from https://studymoose.com/critical-analysis-of-i-have-a-dream-essay 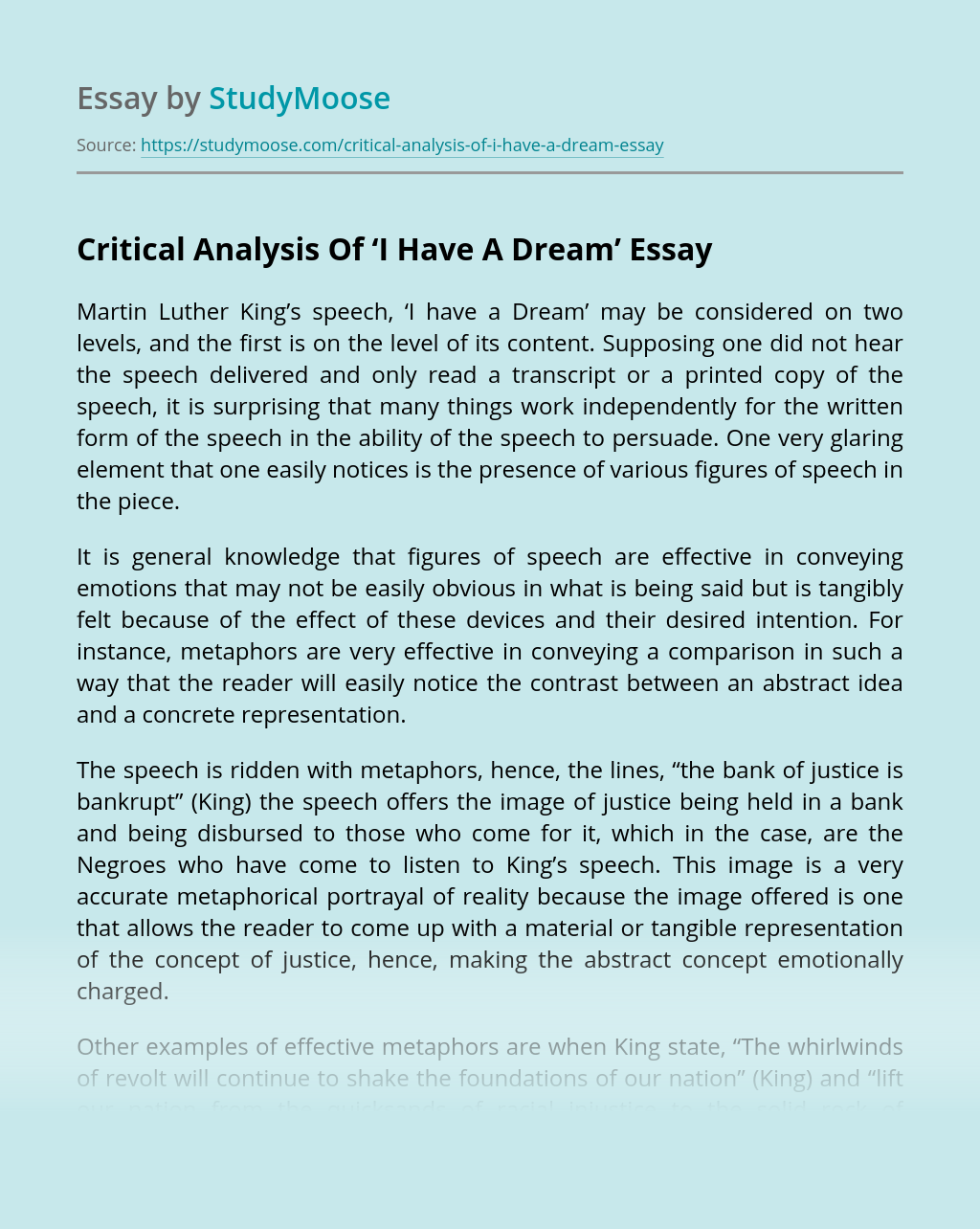