On the surface, the issue of Bob Marsh’s firing from Cooper Pharmaceuticals appears to be an open and shut case; he did not adhere to the repeated warnings by management to alter his performance and selling style, therefore he was fired. However, other considerations are in play when you analyze this case further. Bob was an employee of Cooper for twelve years at the time of his termination, and had seemingly improved his performance when prompted to do so. Bob was also exceptionally well received by physicians, office receptionists, and hospital personnel, which is a vital attribute when being a “detailer.

Turn in your highest-quality paper
Get a qualified writer to help you with
“ Cooper Pharmaceuticals Case Analysis ”
Get high-quality paper
NEW! AI matching with writer

” His persistent downside, though, was his lack of organization, planning, and follow-up, and a tendency to question some of the company’s major promotion programs. The central question to this case is, “how could this happen to someone like Bob Marsh in a company like Copper?” In my opinion, while Cooper Pharmaceuticals was not entirely without fault, Bob’s termination was primarily the result of his own actions, or lack thereof.

Cooper Pharmaceuticals was a major manufacturer of prescription drugs for the medical and dental professions and had a reputation throughout the industry for having “excellent” management practices.

The company fielded a sales force of over 500 detailers whose job was to persuade medical personnel to use and prescribe Cooper Pharmaceuticals’ drugs. Initially, Bob fit the mold of what was desired by Cooper in prospective employees. He was rated highly in his sincerity, aggressiveness, attitude, enthusiasm, learning ability, judgment, character, affability, and appearance; Bob seemed like the perfect fit.

He was hired about a month after his initial interview and, much to his delight, was assigned to a territory in his hometown, Toledo. From there, Bob was seemingly ready to start his training and begin a long and prosperous career with Cooper. An effective sales training program is vital to the success of a company’s sales force. A training program should have a finite set of objectives: increased sales productivity, lower turnover, higher morale and sense of purpose, improved communication, improved customer relations, and improved self-management. It is also important that companies provide a method for systematically reinforcing their training programs.

Otherwise, salespeople are unlikely to change their behavior. The training at Cooper Pharmaceuticals, in principle, should have worked quite well. Employees, including Bob, showed signs of increased sales performance on a year-to-year basis, and in 1989 sales exceed $1 billion. Turnover was low for their industry, around 8%. Also, 60% of detailers had ten or more years with the company, and 25% had fewer than five years. Each employee received a company car, generous benefits, and reimbursement for normal business expenses. Bob, while maintaining the same position as detailer, went from a starting salary of $35,000 in year one to a salary over $60,000 in his twelfth year. Bob received a month’s training in product characteristics and selling, or detailing, skills at Cooper’s headquarters. Aside from this training, both new and experienced detailers received regular training from the 35 district managers. This reinforcement was done so to ensure that all detailers maintained the level of expertise and professionalism requisite of a Cooper Pharmaceuticals detailer.

From these facts, it becomes more apparent that the necessary skills to be successful were properly trained, informed, and reinforced in Bob by Cooper. Even from his initial interview with Cooper, there was one glaring fault Bob possessed: his seeming indifference to organization. His first district manager, John Meredith, felt that Bob gave little advanced thought to the physicians he hoped to see. Then, upon seeing the physicians, he had no definite plan or approach once in the physician’s office. From the beginning of this class, we learned that pre-approach is vital to the selling process. In this stage, information is gathered about the prospect to decipher the specific needs they have. As noted in the beginning of the case, Bob had many references from physicians and medical personnel. I believe that these relationships caused Bob to become lazy in his pre-approach and approach, and ultimately served as a crutch on which he began to rely.

In addition to his lack of organization, Bob displayed more interest in developing his own promotional programs than in following the plans outlined at district meetings, and he would also second-guess promotions by deciding, on his own, which products to promote. This should have been a huge red flag for John Meredith. What would happen if a baseball player blatantly disregarded a sign and decided to swing when his coach told him not to swing? That player would find himself on the bench. If that player continually disobeyed his coach’s instructions he would find himself looking for a new team. In this instance, though, Bob was not benched. He was instead given a list of suggestions on how he could improve in certain areas, including:

After John Meredith, there was Bill Couch, then Jim Rathburn, followed by Vince Reed, Antonia Wilkens, and ultimately Ted Franklin. Six supervisors in a twelve year span is a high number. Then, when you consider the fact that many of them were young, motivated, and driven, it becomes clearer why Bob was able to keep his job. His sales numbers were constantly at quota, and there were no issues in terms of customer relations. By the time his deficiencies were noted, a new district manager was in already in place. It seems that Bob was aware of this trend and used it to his advantage. So long as he hit his sales quotas and kept customers happy, all would be well. The case states that every Cooper Pharmaceutical detailer was evaluated in terms of both sales volume and improvement in his or her relationships with customers.

From this statement one could conclude that Bob should have retained his job. His sales volumes were constant yearly, sometimes increasing. He also, evident from the multiple inquiries from current customers upon his termination, maintained wonderful working relationships with his customers. The evaluation process at Cooper Pharmaceuticals is what perpetuated Bob’s employment with the company. While looking at just the sales numbers, Bob appeared to be a great employee. However, there are other factors to consider when evaluating employees. Most managers or supervisors would likely agree that they wished their employees follow their instructions when prompted to do so. To ensure that a case similar to Bob’s does not become the norm at Cooper Pharmaceuticals there are three steps that management should take. One, they should maintain a better record keeping process of employment evaluations. It is possible that because this example occurred during the 1980s, record keeping was maintained on paper rather than computers.

However, that does not excuse an employee who repeatedly makes the same mistakes to be retained. Two, there should be a more streamlined transition process for an outgoing district manager to pass on files/documentation to the new district manager. For example, Bob was placed on probation by Vince Reed that required him to improve performance to an acceptable level within 90 days. However, upon Vince Reed’s subsequent transfer, no one followed up on Bob’s performance. Bob’s probationary status had “evaporated.” Three, they should enact a three-strike policy. One could receive a strike for failing to reach sales quotas, not following management’s instructions, or falling customer relations. An employee would be fired following strike three. Doing this step would make the threat of termination a tangible thought, employees would be fully aware that constant missteps and mess-ups will not be tolerated.

The thought of Bob Marsh being reinstated or there being any legal ramifications for Cooper Pharmaceuticals is laughable. Bob was given the chance to improve his faults on multiple occasions, yet he failed to do so for any extended period of time. He took advantage of the fact that each new district manager gave him the chance to improve. Then, his performance would slip little by little, but by this time a new district manager would be in place and the process would repeat itself. Not until Ted Franklin took over did the process change course. Ted looked over all of Bob’s previous deficiencies and realized that his record was not good and Bob would have to follow an outline given to him and complete weekly reading assignments. Not only did Bob fail to follow this agreement, he accepted his subsequent termination with little resistance or comment. The fact that Bob would call Cooper Pharmaceuticals and say he was treated unfairly is preposterous.

He should be thankful for his twelve years of employment at the company and that none of his previous district managers were as competent or paid as close attention to detail as Ted Franklin. Yes, Bob appears to have maintained great relationships with his customers, and as we learned in class 80% of sales tends to come from 20% of the customers. So it is, realistically, a possibility that some business would be lost from the decision to terminate Bob. However, a company with the reputation of Cooper Pharmaceuticals should not keep an employee simply because a few clients from one sales region want him to be retained.

Certain offers, such as incentives or promotions could be provided to these customers in attempt to ensure their repeated business and prove that not just Bob can provide great service and keep them happy customers. In addition, Cooper Pharmaceuticals should, while not being defamatory or slanderous, fully outline the faults Bob possessed as an employee and effectively relay these as the reasons of his termination to Bob’s accounts. So, to answer this case’s central question, this termination happened to Bob Marsh because of Bob Marsh. 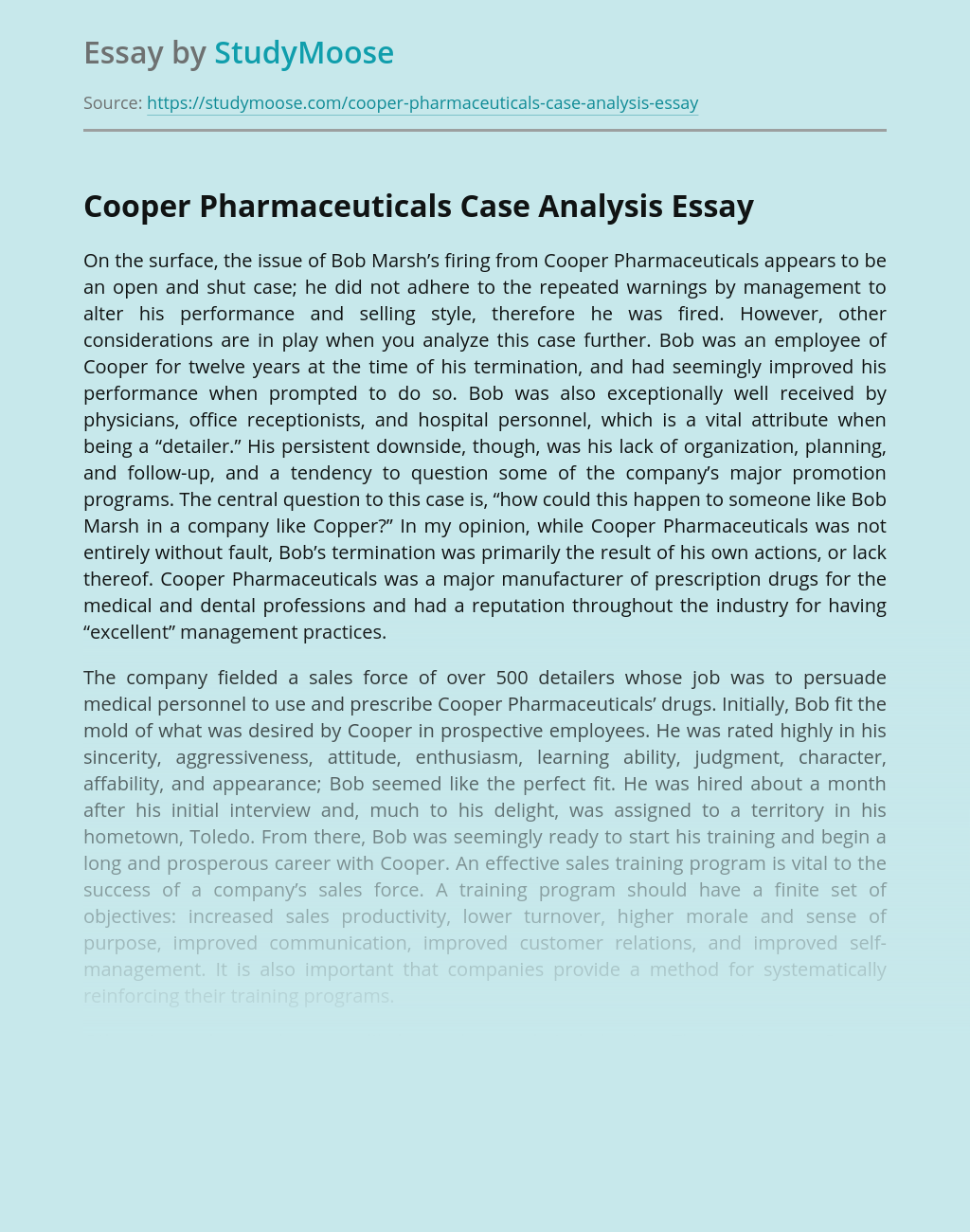 Turn in your highest-quality paper
Get a qualified writer to help you with
“ Cooper Pharmaceuticals Case Analysis ”
Get high-quality paper
Helping students since 2015
Stay Safe, Stay Original