Don't use plagiarized sources. Get your custom essay on
“ Comparison of ‘Harry Potter and the philosopher’s stone’ and ‘Alice in Wonderland’ ”
Get custom paper
NEW! smart matching with writer

I have chosen to explore this extract because it is in this piece of text where Alice enters Wonderland although she has no clue of where she is.

‘Harry Potter and the Philosophers stone’ is about an orphan called Harry Potter who is reluctantly been taken in by his relative, the Dursleys, a mean-spirited unimaginative family. Immediately our sympathies lie with Harry as we see how he is mistreated by the Dursleys. It is not until his eleventh birthday when he learns the truth about himself and his life is changed forever.

Harry learns that he is a wizard and that his parents had not died in a car crash like how he was told but they were killed by a very powerful dark wizard whose name is not mainly said and called ‘You know who’ because of how much the other wizards fear him. From this point on, Harry leaves the Dursleys and moves into a completely opposite world where he is a very famous figure and attends Hogwarts, a school that teaches witchcraft and wizardry.

Throughout the book, Harry faces opposition from almost wherever he goes. ‘Alice in Wonderland’ is about a young girl who finds herself in an unfamiliar and an extraordinary, mystical world known as ‘Wonderland’. Alice enters Wonderland after she slips down a rabbit hole in pursuit of a rabbit she hears talking. She follows the rabbit down a very deep rabbit hole and falls into a room. She doesn’t know where she is but that does not make her panic. She then comes across a bottle containing a magical potion which causes Alice to shrink in size and here she faces a challenge in getting hold of the golden key which she had left on top of the wooden table. The main characters from both novels are portrayed very differently to each other.

In the extract from ‘Harry Potter and the Philosophers stone’, Harry faces a challenge in finding the snitch before the Hufflepuff seeker finds it. This is made difficult for Harry, firstly because he feels pressure from Wood and the other Gryffindor team players as this is a very crucial game for them and secondly because Snape is refereeing the match and he will be biased against Gryffindor. Just as Harry feels pressure, in Carroll’s novel Alice is portrayed as very ignorant towards the natural world. This is the reason why Alice does not see it as being strange when she hears a rabbit say to itself ‘Oh dear, Oh dear! I shall be late!’ it is not until the rabbit takes a watch out of its waistcoat, she realizes that it is very unusual for a rabbit to make this action and this is why she follows him down the rabbit hole.

The Victorian era plays a large role in Carroll’s novel. The queen was the dominant figure at the time. It was also an era of punctuality which regards to the rabbit being late. The Victorian era was an age of growth and self-discovery, this relates to Alice discovering a completely new world whereas in Rowling’s novel, Harry does not only ‘discover’ a completely different world but faces a major challenge in discovering his own self, which he finds very difficult to believe at the start because he has spent the last few years of his life in a cupboard under a staircase. In Carroll’s novel, the queen is dominant over Wonderland unlike Rowling’s novel, where there is no queen or king of the magical world, but there is a ‘Ministry of Magic’ which tries to keep the Magical World away from the non-magical world. Hagrid describes the Ministry of Magic as ‘messin things up as usual’ and we get a very similar impression of the queen in Carroll’s novel .

Like many other novels from the Victorian times, Carroll’s novel also has a reference to the class. We get this impression when Alice struggles to get hold of the golden key which she had forgotten on top of the wooden table. In Rowling’s novel, there is no reference to the class instead it is all about whether someone is ‘pure-blood’, ‘half-blood’ or a ‘mudblood’. Hermione is taunted by Malfoy and the other Slytherins for being a ‘mud-blood’ or having non-magical parents. The reason why the Slytherins tease mud-bloods is because they are all pure-bloods themselves.

Ron on the other hand is a pure blood but is teased for the lack of money his family has. In this extract Ron faces a challenge in dealing with Malfoy when he is insulted by him. Ron chooses the option of beating him up and as Crabbe and Goyle try to help Malfoy, Longbottom also gets involved to help Ron. Rowling has done this to show that Longbottom has the courage to face his enemies even though he is bullied by Malfoy and his gang because they think he is very stupid and doesn’t have the courage to stand up for himself. It is not that Longbottom gets involved shows us he has courage but he takes on two other people who are much bigger than him in size. Ron’s action shows us that he has a very short temper and if he loses it then he can be very brutal.

From the extract I have chosen from Carroll’s novel, Alice faces a challenge in finding out where she is and how to get out. At the end of the fall, Alice hears the rabbit and does not give up in chasing it which leads her into a long, low hall. She finds a key and faces a challenge in finding the door the key goes to. After she finds that the key goes to none of the doors, she still does not panic instead she goes around again and finds the real door but notices that the door is too small. It is a major challenge for her to recognize the real world. When she is falling down the rabbit hole, she thinks that the people on the other side of the Earth would walk on their heads whereas she does not understand that everyone is pulled to the centre of the earth and the fact that it is impossible for anyone to walk on their head.

She also thinks that she will virtually fall right through the Earth but this is also impossible. Her ignorance is the factor that makes her so unafraid of anything and this is the explanation to the fact that she heard the rabbit talk and didn’t find it so ‘remarkable’. Carroll Characterizes Alice as being a show off with her vocabulary and he does this by putting a load of non-sense in her speech. Harry on the other hand is described as very quite and completely the opposite of ‘showing off’, this is why despite knowing how famous he is, he does not use it to show off.

Comparison of 'Harry Potter and the philosopher's stone' and 'Alice in Wonderland'. (2017, Oct 31). Retrieved from https://studymoose.com/comparison-of-harry-potter-and-the-philosopher-s-stone-and-alice-in-wonderland-essay 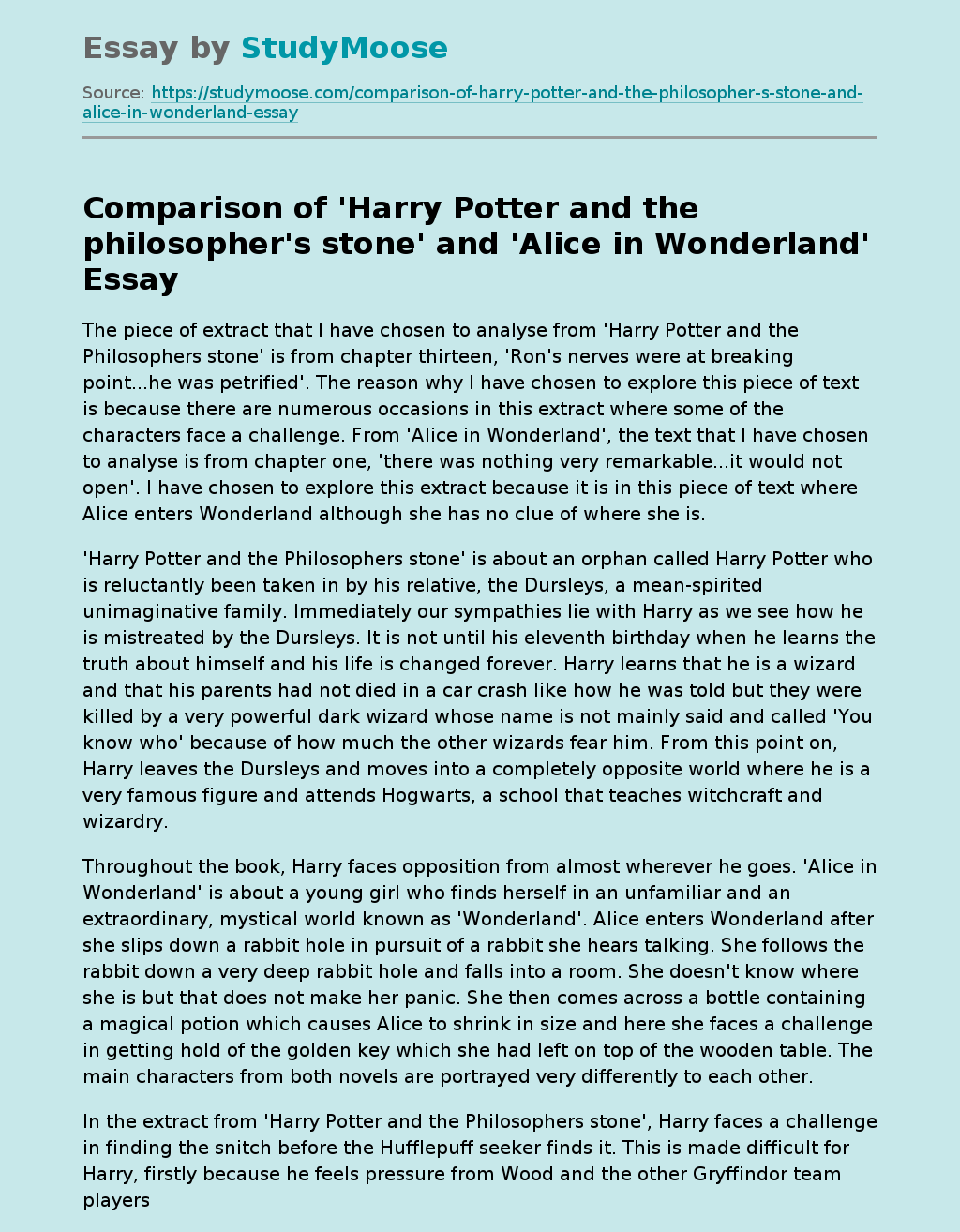