Title Alice and Wonderland 20120 Screen Writer Linda Woolverton Director Tim burton March 5, 2010 The Scene Scene Design Throughout the whole movie the scenes keep changing going from a reality to something what seems like a dream. The scenes are over the top and amazing and fit the film 100 percent of the time. Lighting Design Alice is transitioning from the dark forest to the bright but destroyed looking tea party as the two settings are a mix of contrast. At the same time the characters are contrasted to their surroundings as they are much brighter than their environment.

Don't use plagiarized sources. Get your custom essay on
“ Alice and Wonderland ”
Get custom paper
NEW! smart matching with writer

The clashing of light and dark colors show that the creatures of Wonderland are at war. Sound Design The sound not only help move the story and convey the emotion everyone is looking for, but also to help give that Tim Burton feel. I feel like he wants his films to fit within the overall context of pop culture and film in general. This movie really try to keep a realism and timeless funkiness to the sound and resist the temptation to create sounds or design scenes to be too over the top or distracting.

I love the volume and rama in all of the costumes featured in the movie. I actually didn’t mind Alice shrinking into a size of a pea and magnifying into a giant because her dresses would change into something beautiful every time it happened. I’m a sucker for drama, colors, and volume.

So of course my favorite was the costume design of Johnny Depp’s Mad Hatter’s costume was hauntingly beautiful, despite the tears and holes that gave Offa creepy but delicate look. 1 . Long/medium/close-ups Alice and Wonderland is a movie with many different camera shots. This film is shot in more of a wider viewing.

With some minor close ups throughout the movie 2. Camera angle The visual effects are stunning, especially in 3D. When hurtling down the hole, the camera angles shoot from Alice’s perspective. The 3D enhances the swooping landscape shots and is for the atmospheric effect. It pulls the audience more into the world and the film is better for it. Throughout the movie camera angles enhance the experience. Shots filmed through keyholes and in different perspectives allows audiences to experience Wonderland for themselves. 3. Camera movement The camera movement in this movie combines a little bit of everything.

But mostly the space between the two cameras that represent the human eyes and create the illusion of depth is a main factor taken into place during this movie The Story The Plot Alice is and unconfident and confused 19 year old girl who is being forced into marriage with an English man. At her engagement party she escapes the crowd to consider whether to go through with the marriage or not. She then sees a strange rabbit and falls into a rabbit hole. Arriving in a strange and surreal place called wonderland she find herself in a world that resembles a dream she had as a little girl.

It was filled with talking plants, animals, an evil queen, knights and a ferocious beats. Alice realizes that she is there for a reason and that reason is to conquer the horrific Jabberwocky and restore the White Queens place on the throne But, at the same time she is there to find herself and become the woman she is meant to be. Initial situation Alice has been mourning the loss of her father. She is troubled by unremembered memories of the past in her dreams. Alice all of 19 attends a garden party where she is surprised by an unwanted marriage proposal and the expectations that society beholds upon her.

Running off distraught and confused she chases after a white rabbit. Inciting moment this whirlwind of fascinating adventure. Alice is placed in a room with a door too small for her to fit through. She is told to indulge the drink to shrink and eat the bread to grow. She goes through the door and then her adventure really begins. Complication Alice encounters complications with every new character she interacts with. Alice herself is a big complication through the movie she has to try and understand the mysteries of wonderland. She must also undergo changes from a shy innocent girl to a warrior who can slay the red queen’s evil beast.

Climax and resolution The red queen is throwing a trial that Alice must attend. The queen is accusing frog of eating all of her tarts. There is a great deal of evidence giving again the frog. The frog is sentenced to be beheaded and Alice stand up for the frog and said to be executed by the queen. She fghts off the queen’s guards and escapes. She then leads an army against to queen and her evil beast. She faces the beast in an extraordinary battle when she be heads the beast and the while queen’s restored to power in Wonderland. Denouement After Alice came back from Wonderland she returned as a new woman.

As she urned down the wedding proposal and worked for a man opening trade up in China. She went to China at the end and sees the butterfly from wonderland. Alice never promised to come back to wonderland only to never forget. The Characters Major Characters Alice – She is destined to slay the red queen’s killer beast. Alice’s experience in Wonderland is about reconnecting with herself and finding out that she has the strength to be more confident in figuring out what she wants. The Mad Hatter- He has been awaiting Alice’s arrival back to wonderland. Mad Hatter is Alice’s protector he would go to and length to help or protect her.

He is her on true friend and believed in her even when no one else does. The Red Queen- She rules with and anger like no other always wanting to behead people at the slightest thing. She stole the crown and the throne from her sister the white queen. The Red Queen is also meant to stop the prophecy from becoming true and to stop Alice from defeating the her killer beast. The beast that gives her the rule over Wonderland. Minor Characters Absolem- He is the character in wonderland that people go to for answers. He is the keeper of the scroll and knows all of Wonderland’s history.

The White Rabbit- His Job as to make sure Alice made it to Wonderland and to keep her on her path through the movie. The White Queen- Her role in this movies is to help Alice gain her The Actors Mia Wasikowska played Alice who is a movie actor that was the perfect person to play the role of Alice. Johnny Depp played The Mad Hatter who is a theatrical movie actor and did an amazing Job in the roll. Anne Hathaway played the White Queen who is a Movie actress who I love her, she makes whatever roll she plays magnificent. Helena Bonham Carter plays the Red Queen. She is a movie actress and did perfect in this role and didn’t go overboard.

Matt Lucas played both TweedleDee and TweedleDum he is a great movie actor but I would have liked to see a little more from him in this movie. Michael Sheen plated the White Rabbit who is a movie actor and played a good roll he was very funny and to the point. Stephen Fry was great at playing the Cheshire Cat she is a new movie actress to most people. She played the character and the was role perfect for her. Alan Rickman played as the Blue Caterpillar he is a movie actor and the caterpillar has always been one of my favorite characters and he did a great Job bringing him to life. The Director

Individual style, other major works, biographical context Tim Burton is one of the most unusual and unique directors of our time. He brings characters to life by putting them in a place they don’t belong. Tim Burton points out the misfit character and shows how different they are. His use of camera angles, lighting, and sound give the viewers a different perspective on the movies, and help pick out the individual character. Some of his movies include Alice in Wonderland, Beetlejuice, The Addams Family, Dark Shadows The Corpse Bride, Charlie and the chocolate factory, and Edward Scissorhands..

Burton has directed 16 ilms and produced 12. Burton was born on August 25, 1958 in Burbank, California. He majoring in animation at the California Institute of Arts. He worked as a Disney animator for less than a year before going out on his own. He became known for creating visually striking films that blend themes of fantasy, horror, and comedy all into one film The Screenwriter Linda Woolverton is a born teacher. She has a gift for clarifying the underlined edge of storytelling. She is amazing at taking an idea and creating into something edge She has wrote works like Beauty and the Beast, The Lion King, Alice in Wonderland,

She also had a part in Aladdin, Mulan, and Arctic Tale. Linda Woolverton was born 1959 in Long Beach California. She wrote a couple screenplays for Disney’s animated film Woolverton then went on to write some Broadway performances. She also co-wrote a book for Broadway and then she wrote her own book. The genre, type, and period tragedy _ drama _ comedy _ musical comedy _ musical drama Genre – Type The genre type of Alice and wonderland is a Fantasy. Period other The period time of the movie would have been recorded and filmed in 2010, the Era of the movie would represent the nineteenth century.

You can see this by the way they talk and the look they have bestowed upon them selfs. The Context Philosophical Historical The new Alice and Wonderland is inspired by Lewis Carroll’s Alice’s Adventures in Wonderland and served as a sequel to the original disney movie. The film was created when the Walt Disney Company handed over 250 million Social There is a lot in this movie about social rights. The red queen forced herself in charge and condemned anyone who opposed her to death. This could represent to social fght for power or freedom. This goes on and on through the movie you are told y some flowers that they are the lower social class.

Religious – I could not find a religious meaning behind Alice in Wonderland 2010 What you like I would watch this movie over and over again its comical, adventurous, and a little creepy the animation of the movie keeps me involved the whole time. What you think This movie to me was all around great from the beginning to the end. One of my favorite parts of the movie was when Alice meet the caterpillar and then again when she fought the Red queens killer beast. Although I do feel like they that could have gone a little move overboard with the overall movie. 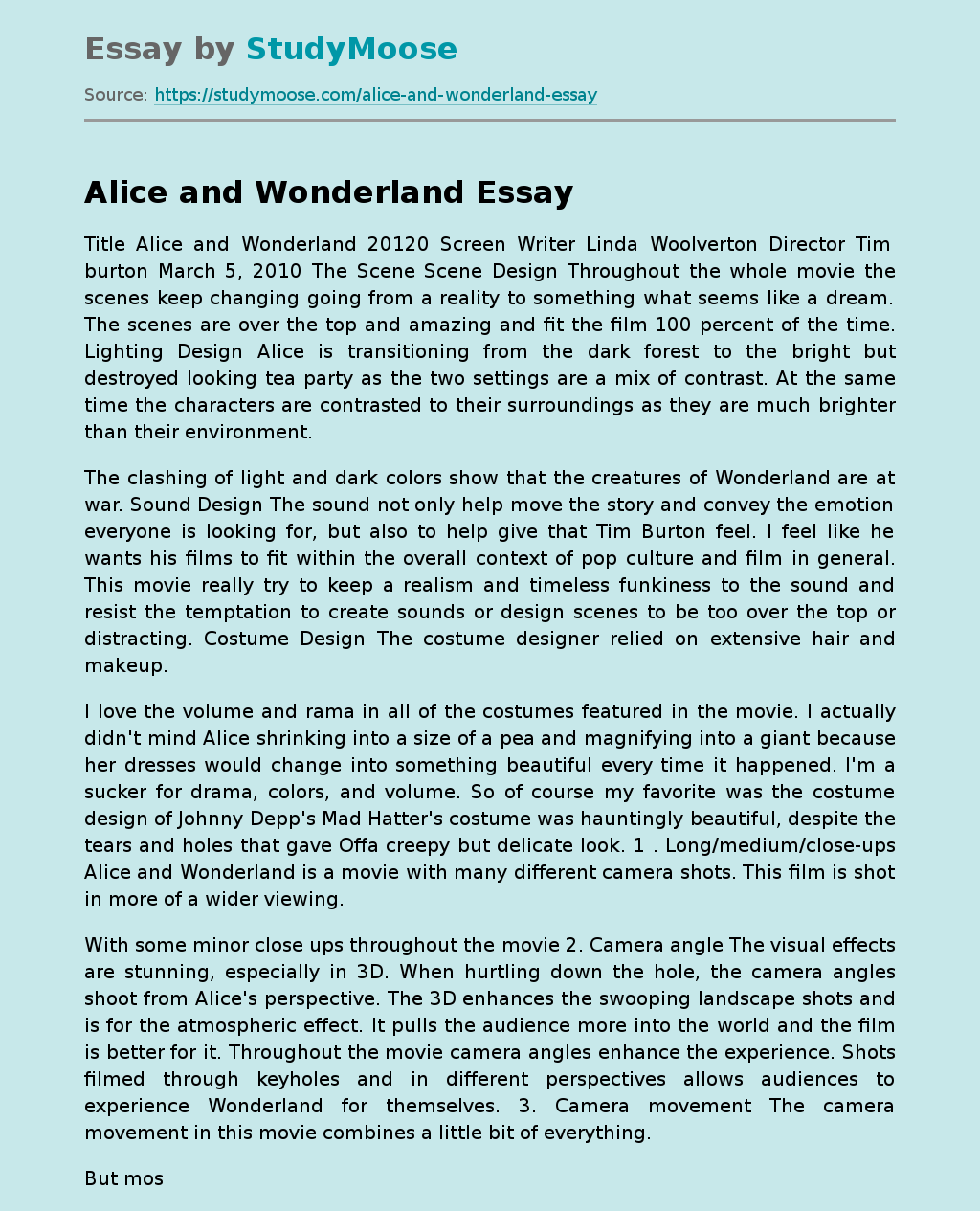