Many people resented this law and rebelled against it. These rebels fled Lilliput to live in Blefuscu, and ever since, there has been a terrible war between the two empires. This argument is ridiculous. Swift knew that when he wrote it. It is another swipe at England in the 1720s. For centuries, England had been at war with France for one reason or another. Swift was illustrating how silly and childish, to someone with a view of the whole situation, these reasons are.

Don't use plagiarized sources. Get your custom essay on
“ Comparing Animal Farm and Gulliver’s Travels ”
Get custom paper
NEW! smart matching with writer

The argument over which end to crack your eggs is obviously a great exaggeration of Swift’s thoughts, but it got the message across.

In chapter 5 of Gulliver’s voyage to Lilliput, there is a fire in the palace. All of the Lilliputians try to put out the fire with their tiny buckets of water, but it was no use. Gulliver did the only thing he could think of, and urinated on the palace, putting out the fire.

Immediately after, people were grateful that he’d managed to put out the fire. However, later on, Gulliver learns that the Emperor of Lilliput plans to use that action against him when he plots to kill him. This was Swift’s way of showing his thoughts on gratitude from people in power.

He believed that people in a position of power, such as the Emperor of Lilliput, were always ungrateful for things which other people did for them. If Gulliver had left the palace, there would probably have been quite a few casualties.

However, he used his initiative and put the fire out, maybe not conventionally, but it did the job just the same. The Emperor was not happy with that, and made it look as if Gulliver had done something wrong. This act, along with a few others, was intended to ensure that Gulliver would be killed. Gulliver discovered their plans, however, and escaped to Blefuscu.

By chance, Gulliver is picked up in the sea by an English ship. The crew believe him to be crazy when they hear of his tales of little people, but when he produces some cattle that he had in his pocket, they believe him. This is another clue to the fact that this book was not written recently. In those days, the 17th and 18th centuries, people blamed everything on madness. Gulliver may have been ranting because he was tired, hungry, thirsty etc, but straightaway, the crew blamed it on madness. When he returns home, Gulliver is pleased to see his family, but he has “itchy feet” – he cannot wait to go on another voyage.

“I stayed but two months with my wife and family; for my insatiable desire of seeing foreign countries would suffer me no longer”. Brobdingnag After two months of being back home in England with his family, Gulliver is off again. He didn’t know where he was going, except that he was going to explore foreign lands. About one year after setting sail from England, they see land. The captain sends a longboat ashore to try and find fresh water. Gulliver, keen to explore the new land, goes with them. Once on shore, the men set off in search of water, while Gulliver wanders off.

He wanders about for a while, then decides to return back down to the boat. He sees his fellow shipmates rowing away in the boat, followed by a huge creature. Gulliver turns around and runs for his life. He is walking through a field of corn, the corn being nearly forty feet high, when he sees more of these creatures. Gulliver tries to hide himself in the corn, when several more of the creatures appear with reaping-hooks. The creatures start moving towards Gulliver, but are unable to see him. Gulliver, fearful of being squashed, cries out as loud as he can. One of the creatures hears his cry and looks down.

He lifts Gulliver up so that he can have a better look at him. Gulliver is very frightened, both of what the creature might do to him, and because he is so high up from the ground. “For I apprehended every moment that he would dash me against the ground, as we usually do any little hateful animal which we have a mind to destroy”. Gulliver is taken to the farmer’s house, where he is given food. “… a servant brought in dinner. It was only one substantial dish of meat in a dish of about twenty-four feet in diameter. The wife minced a bit of meat, then crumbled some bread, and placed it before me”.

In Brobdingnag, everything is the opposite of Lilliput. Gulliver is now in a reversed role. In Lilliput he was a giant. In Brobdingnag he is tiny and unimportant. He is treated as a plaything. Being small also helps Gulliver to see the world differently. Any faults or defects are magnified and made much more obvious than in Lilliput. In Gulliver’s first voyage, to Lilliput, Swift made it clear in his writing that Lilliput was meant to be England. Gulliver was huge and so could see everything that was going on, and so was able to criticise Lilliput as he saw fit.

In Brobdingnag Gulliver is the tiny one. When he is taken to the royal palace, he meets the King and Queen. He has long discussions with the King about England, and the King is disgusted by what he hears: “He was perfectly astonished with the historical account I gave him of our affairs during the last century, protesting it was only a heap of conspiracies, rebellions, murders, massacres, revolutions, banishments, the very worst effects that avarice, factions, hypocrisy, perfidiousness, cruelty, rage, madness, hatred, envy, lust, malice or ambition could produce”.

This sentence summed up Swift’s feelings about England, and really, if you look back at England’s history with a cynical eye, you will see that it is true. Hopefully, if Swift re-wrote the book now, in the 21st century, he would see things differently. There are still things going on that shouldn’t be, but things have definitely improved since Swift’s time. Swift doesn’t really give a proper description of the people of Brobdingnag. At first he cannot understand their language, but the farmer’s daughter helps him. Gulliver calls her his glumdalclitch, or “little nurse”.

Glumdalclitch helps Gulliver to learn the language, and accompanies him to the palace when the Queen buys him from the farmer. Probably the best description of the people of Brobdingnag is when Gulliver describes the Maids of Honour at the palace. The maids treat him as a plaything. He describes his disgust at the way they treat him: “They would often strip me naked from top to toe and lay me at full length in their bosoms; wherewith I was much disgusted; because, to say the truth, a very offensive smell came from their skins…

That which gave me most uneasiness among these Maids of Honour, when my nurse carried me to visit them, was to see them use me without any matter of ceremony, like a creature who had no sort of conscience. For they would strip themselves to the skin, and put on their smocks in my presence, while I was placed on their toilet directly before their naked bodies, which, I am sure, to me was very far from being a tempting sight, or from giving me any other emotions than those of horror and disgust”.

In this description, it is hard to know whether Swift is disgusted with women, or if he is using them to show his disgust of vanity and the illusion of physical beauty. Women generally take more care in their appearance than men, so they would have been the obvious choice if Swift were doing the latter. Other than that, there is no description of the people of Brobdingnag. Gulliver’s departure from Brobdingnag is quite peculiar and relies completely on chance. He is carried about the country in a small box. Gulliver pretends to be ill and says that he needs some fresh air.

The page carrying the box sets it down on some rocks and then goes off wandering. Then, an eagle swoops down and grabs the box in its beak. It carries Gulliver across the sea, but then is shot. Gulliver’s box falls down into the sea. By chance, he is discovered by an English ship, and is hoisted up onto the deck. Gulliver forgets that the people are of his own size, and tells one of the crew to put his finger in the ring at the top of the box and pull the lid off. Again, the crew thinks him mad, but again Gulliver has little objects that prove that he is sane.

This time, he has a comb and a ring. Once Gulliver is back home, everything seems strange. He imagines himself to be in Lilliput again, where the house and people are tiny, for he is used to the size of the inhabitants of Brobdingnag. He shouts instead of talks, thinking that the people can still not hear him in his normal voice. He comments that his wife and children have starved themselves to nothing, when in reality they are well fed. Gulliver cannot see people if they kneel or sit down, “having been so long used to stand with my head and eyes erect to above sixty foot”.

His wife asks him not to go to sea any more, but Gulliver knows that if another opportunity comes his way, he will take it. Laputa Gulliver had not been at home more than ten days when a captain came to see him about going to sea once more. Gulliver was offered the opportunity to have a role on the ship which was equal to that of the captain, and double his normal wage. Show preview only The above preview is unformatted text This student written piece of work is one of many that can be found in our GCSE Jonathan Swift section. 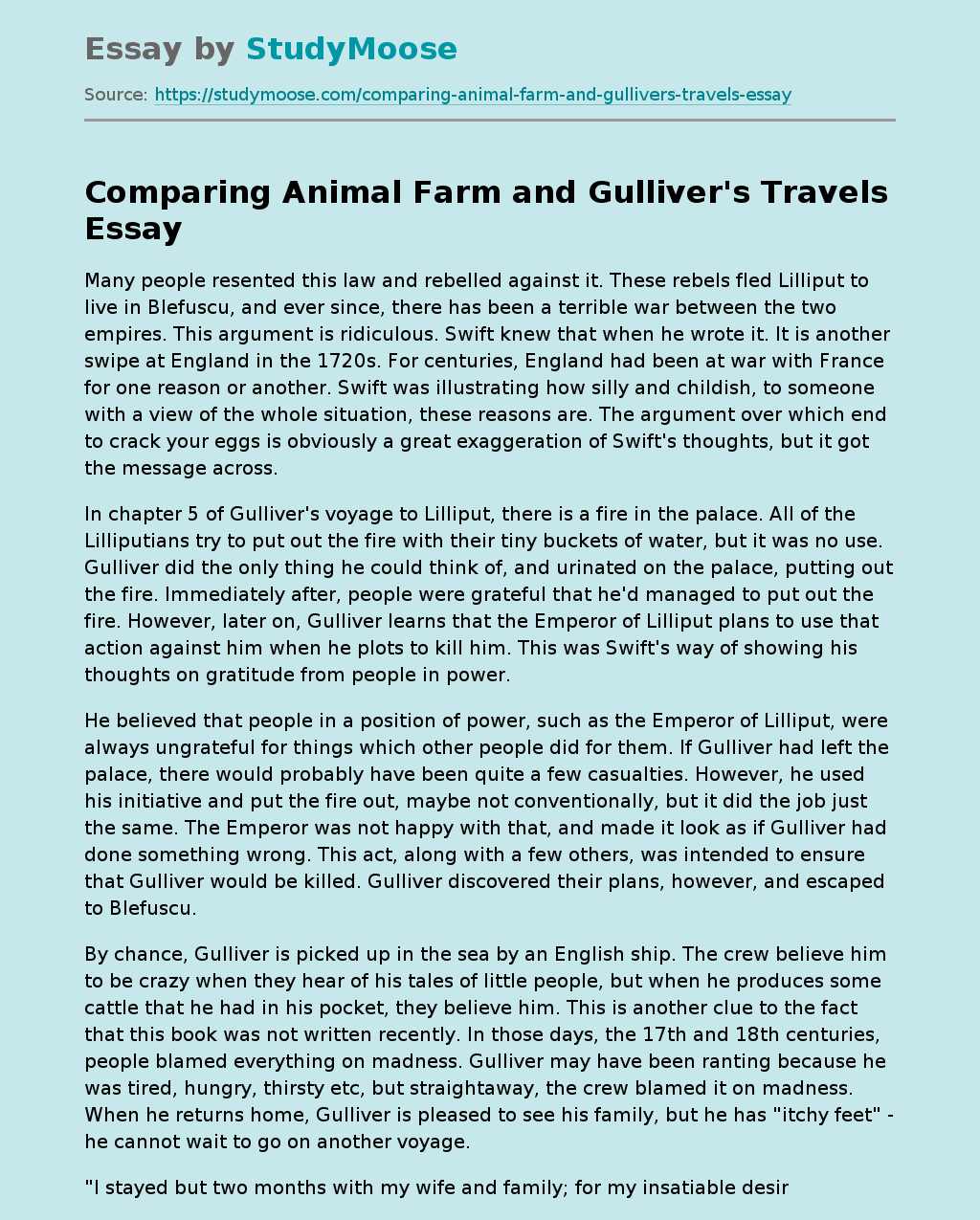