Whenever the animals had any doubts about anything, Squealer was quick to reassure them and convince them that everything was fine. There were lots of other animals on the farm apart from the pigs, but probably only two that were very important – Benjamin and Boxer. Benjamin was a donkey. It is written that he: “seemed quite unchanged since the Rebellion. He did his work in the same slow obstinate way as he had done in Jones’ time, never shirking, and never volunteering for extra work either.

About the Rebellion and its results he would express no opinion.”

Benjamin represented the sceptical people both inside and outside Russia. They weren’t sure that the revolution would change anything. They realised that a crazy leader could call himself a communist. They also knew that communism wouldn’t work while there were power-hungry leaders. Benjamin was one of the very few animals who could read well, but he never practised it.

The only time he read anything aloud was when he read the side of the van in which Boxer was being taken away. He read it so that he would save his friend, but any other time he refused.

Boxer was a horse, a huge carthorse. He was very strong – “as strong as any two ordinary horses put together”. He had a white stripe down his nose, which is said to have given him a somewhat stupid appearance. In fact, Boxer was not of first rate intelligence, but is said that he was universally respected for his steadiness of character and tremendous attitude to work.

Boxer was a very likeable character. He never said a bad word against anybody, never wished harm on anybody, and was genuinely upset when he thought that he’d killed a farm boy in the Battle of the Cowshed.

He followed Snowball and Napoleon faithfully, always believing what they said. However, when Squealer informed the animals that Snowball had been a traitor, Boxer found it hard to believe. He asked questions and seemed to annoy Squealer. He had two mottos: “I will work harder” and “Napoleon is always right”. He was dedicated to his work when building the windmill. He collapsed while helping in the building of it. Clover and Benjamin told him to slow down and not to work as hard. Boxer believed that he was destined for a peaceful retirement after his working days were over.

Napoleon told the animals that Boxer was going into town to be treated by a vet, when in fact, he had sold Boxer to the knacker’s yard. Napoleon had killed his most faithful subject, who had never doubted him. The money Napoleon received from selling Boxer was spent on beer for the pigs. Boxer represented the dedicated communist followers. They believed everything Stalin said because he was a “Communist”. Many still remained loyal after it was clear that Stalin was a tyrant, but he betrayed them all when he eventually killed them.

Apart from Mr Jones, there are only two other human characters. They are the owners of the two neighbouring farms – Mr Frederick and Mr Pilkington. These two men represented the leaders of both England and Germany at the height of the revolution – Hitler and Churchill. Hitler was Mr. Frederick, a “tough, shrewd man, perpetually involved in lawsuits and with a name for driving hard bargains. ” Mr Pilkington, an “easy-going gentleman farmer”, represented Winston Churchill. These two men never agreed with each other and refused to be involved in any way with the other one.

Later in the story, Napoleon plays each farmer off against the other, by choosing to sell a pile of timber to one farmer, then changing his mind and deciding to sell it to the other. In the end, he chose to sell it to Mr Frederick (Hitler). Money was sent to the farm and the timber was sent to Frederick’s farm. It turned out, however, that the notes were forgeries and Napoleon had been tricked. This action represented the Nazi-Soviet Pact at the beginning of the Second World War, where Russia and Nazi Germany made an agreement which was later broken by Hitler.

Gulliver’s Travels is written completely differently from Animal Farm, but its aim is the same – to point out certain things which the author believes should not be happening. The author of Gulliver’s Travels was Jonathan Swift. Unlike George Orwell, Swift was not unhappy with one particular event. He was unhappy with everything which was happening in England at the time. The book was written in 1726. In the book, Swift criticised everything about human nature. Like Orwell, however, he does not do it directly. He uses satire. For satire to work, the person or thing being satirised has to be important, fashionable or powerful in some way.

The criticism of England

The criticism of England was so bad that Swift did not put his own name to the book. The completed novel was found on the ground outside the door of a publisher. The book was in the form of a travel book, where the narrator, Lemuel Gulliver, claimed to be writing about his journeys to “several remote nations of the world”. Swift mocked and ridiculed the people and societies that he found in those make-believe, distant places, but what he was really doing was criticising England in the 1720s. From the very beginning it is easy to see that the book was not written in the twentieth century.

The language is quite different, quite formal. The sentences are very long and Swift often goes into lots of detail about the tiniest things. There are also clues in the writing which tell us that this is not a modern piece of writing. For example, when Gulliver sets off on his first journey, he writes that “Twelve of our crew were dead by immoderate labour and ill food. The rest were in a very weak condition”. Lilliput The ship is caught in a storm and destroyed. Gulliver manages to get onto shore, but collapses on the beach. When he awakes, he finds that he is tied down with lots of tiny ropes.

“I attempted to rise, but was not able to stir for, as I happened to be on my back, I found my arms and legs were strongly fastened on each side to the ground; and my hair, which was long and thick, tied down in the same manner”. He discovers that there are lots of little people standing around him. They are very shocked at first, and think that he is a monster, but after a while, they construct a vessel to carry him to the main city of Lilliput. Gulliver meets the Emperor of Lilliput: “His Imperial Majesty spoke often to me, and I returned answers, but neither of us could understand a syllable”.

In all of the countries Gulliver visits, he cannot at first understand the language. This is a part of the satire. By writing that Gulliver cannot understand the languages, Swift is really saying that speeches by important people are often gibberish and pompous. The ordinary person cannot understand them. The people of Lilliput are tiny. They are only 15cm tall. Gulliver is kept in Lilliput as a prisoner. He is not allowed to stay in the main city, for fear of him squashing the residents. After a while of captivity, he is given freedom, but only on certain conditions.

The conditions are that:

The Lilliputians have one great enemy – the empire of Blefuscu. Gulliver finds out that many of the residents of Blefuscu used to once reside in Lilliput, but because of a silly squabble, they were forced to leave. The argument was over eggs and how to crack them! The normal way in Lilliput to crack eggs was to crack the large end. Lilliput’s Emperor’s grandfather, when he was a child, cracked an egg the normal way, and cut his finger. Afterwards, he ordered that the practice should be stopped, and that from then onwards, eggs should be broken at the smaller end. 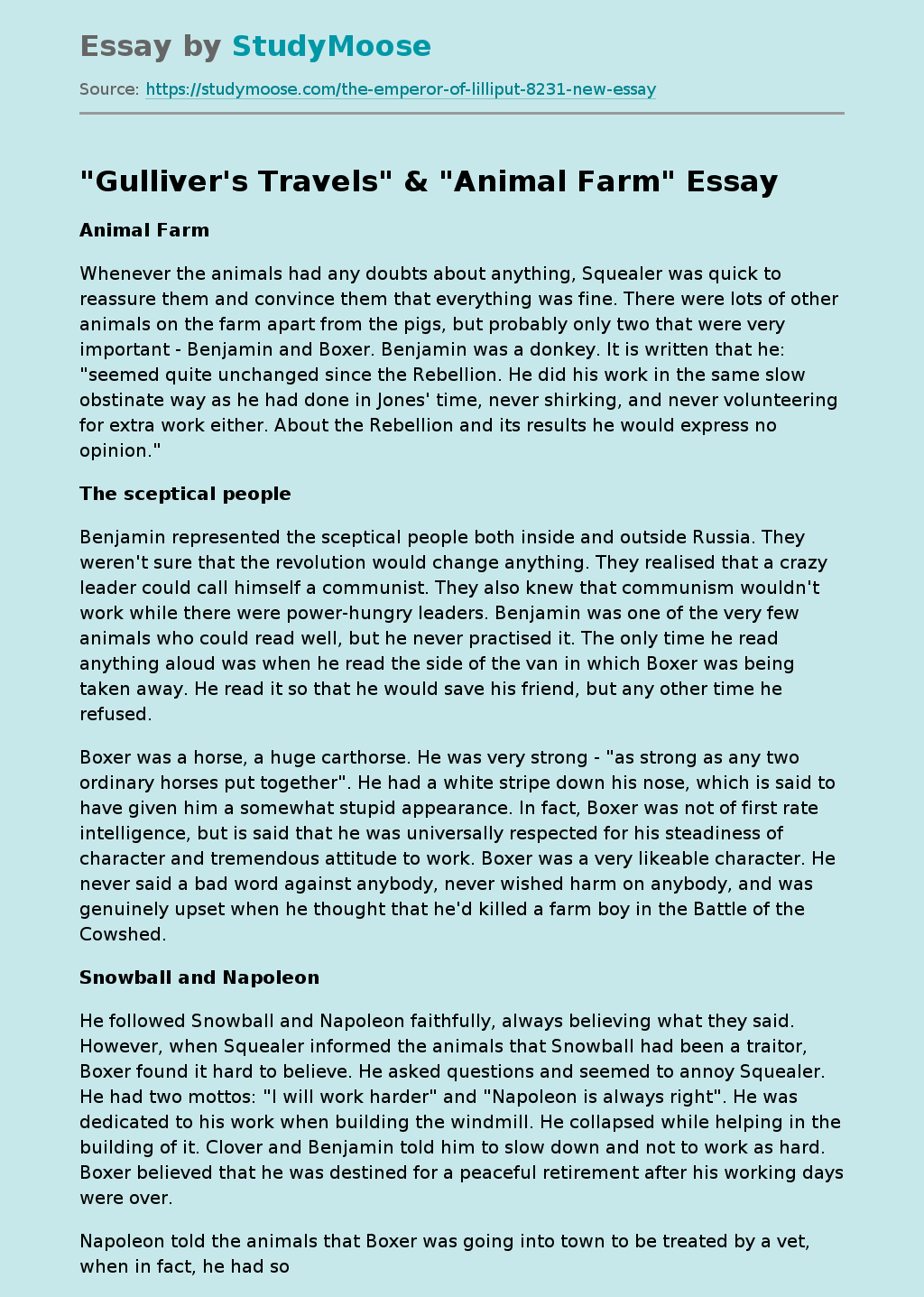