Don't use plagiarized sources.
Get Your Custom Essay on Communication Facilities for Disaster Management Just from $13,9/Page

read more Communication is a major bottleneck in case of any major disaster particularly when the traditional network system already in force brake down. In order to strengthen communications, it has been decided that police network (POLNET) will also be used for disaster management. For this purpose POLNET communication facility will be extended to District Magistrates, Sub Divisional Magistrates as well as the Control Rooms.

For emergency communication, mobile satellite based units which can be transported to the site of the disaster are being procured.

A group was constituted to draw a comprehensive communication plan for disaster management and the report has since been received. This provides for a dedicated communication system for disaster management with built in redundancies. Besides the satellite, communication and education can play a proactive role in mitigation through awareness about the types of disaster and as to how prevention measures can be taken up. There is also a Satellite based communication system called the Cyclone Warning Dissemination Systems (CWDS) for transmission of warnings. There are 250 such cyclone-warning sets installed in the cylone prone areas of east and west coast. The general public, the coastal residents and fishermen, are also warned through the Government mechinery and broadcast of warnings through AIR and Television.

What agencies need to be involved ?

The use of satellite, computers, electronics, better communication facilities are going to make significant difference in disaster management. The data processing and computers are providing a useful tool in decision making in disaster. When the disaster strikes, power goes out, all modes of communication (Telephone etc.) becomes inoperable, lifts stop functioning, when drinking water becomes contaminated, when normal modes of transportation suddenly becomes impossible, when casualties start coming in groups that is not the time for planning but that is the time of acting.

SOME OF THE MAJOR DISASTER EVENTS IN INDIA

DCWDS Digital Cyclone Warning Dissemination System set at Delhi and other coast area. It is for the pre disaster information. The WLL – VSAT system is in terms of handsets which can be easily taken inside of the affected areas and sends information by direct audio communication. The MSS Type C reporting terminal developed for the sending short messages directly through satellite in remote area. AES-SNG is a system which can send video pictures of the affected area for online review from the control center. Tele medicine: It is one more step for the disaster management communication. In this system, on line help can be provided from the hospital and super specialty doctors. Only connect up link to laptop or PC and get the online information about cure. Set up of a communications centre – who needs access and how would it operate (generators, supplies in case people need to staymore than 12 hours, etc). 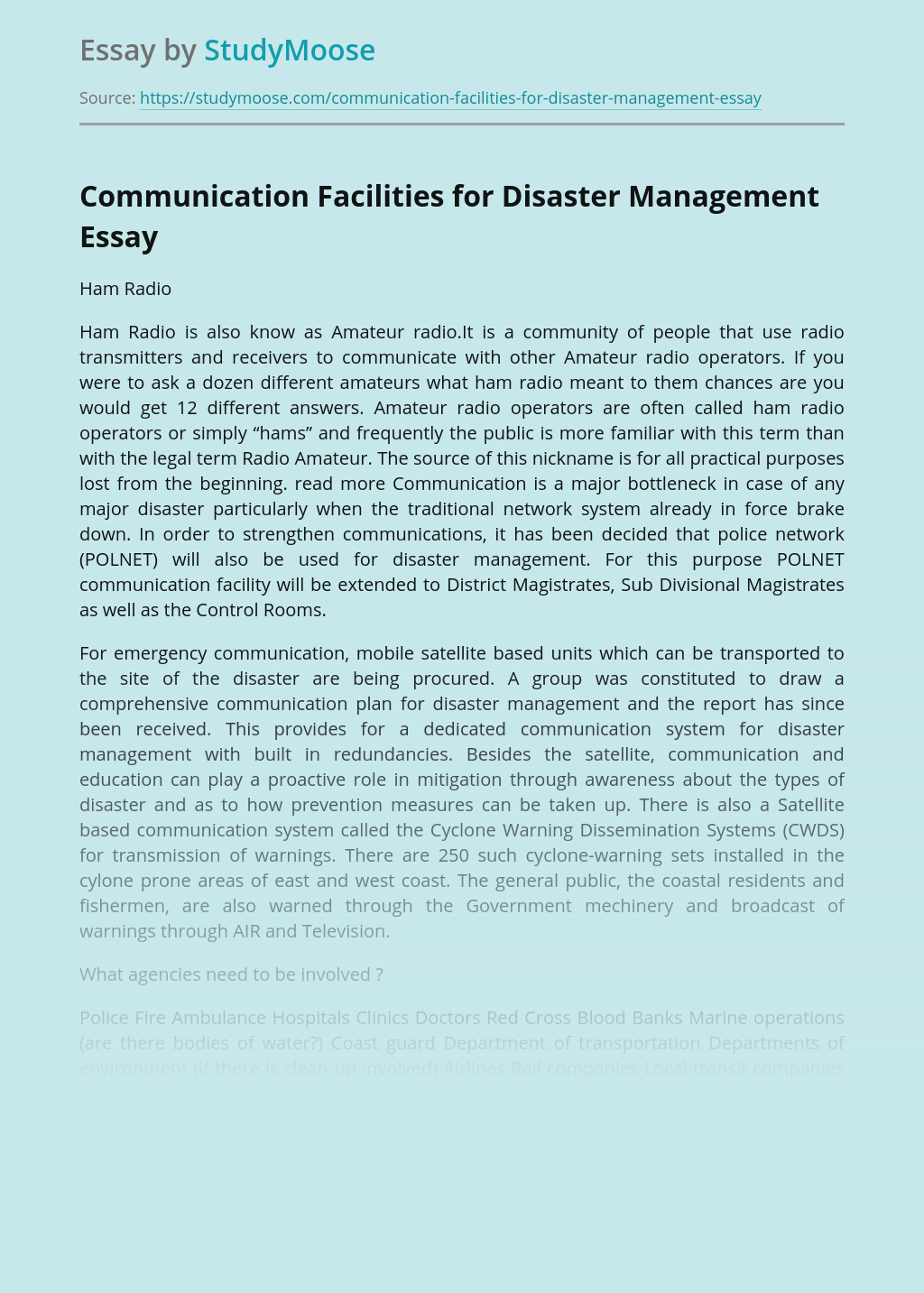 Explain how setting wide strategies to promote positive behaviour and emotional and social development can be adapted to support children and young people with speech, language and communication needs Strategies are essential when planning for children and will benefit those children who do not have an obvious behavioural difficulty. The inclusion of the strategies within... VIEW ESSAY

According to new research done in the field of linguistics and cognitive science, the balance is starting to tilt again in favor of linguistic relativity. This concept proposes that there is a systematic relationship between the nature of the language a person speaks and the way the person understands the world. Although, it is still... VIEW ESSAY

View sample
Get Essay
Different types of business information, their sources and purposes

Introduction Having just started as a trainee at the Corporate Communications Department of Emirates Group, my line manager has tasked me with preparing this set of introductory training materials, on business information in general, for new members of staff in the department, to increase my knowledge and enhance communication skills. Different types of business information,... VIEW ESSAY

The company that I worked for years ago that many people are familiar with was Target. I actually worked in different departments at Target such as the fitting room, the women’s department, the men’s department, electronics, house wares, customer service, and cashiering. I mostly worked at the front of the store at the service desk... VIEW ESSAY

Power is believed to be the capacity of individual to exercise control over other people and resources. Power is a tool that has both positive and negative outcomes depending on how it is applied (Visagie, 2006). The ability to exercise power derives from various sources ranging from economic, political and social dimensions. For instance in... VIEW ESSAY