The story seems to begin in Ethiopia, where the coffee berry grew wild. Goatherds there noted that goats which ate leaves and berries of the plant remained awake all night. The Arabs claim that they developed the plant during the reign of Mohammed (c675 AD). Believe that if you wish – we are going with the Ethiopian story. Consumed originally as a food, it would take on the character of a medicinal and eventually that of a social drink.

The coffee tree grows to a height of 14 to 20 feet, producing (along with bright green leaves and white flowers) a berry which, as it matures, goes from green to yellow to red.

Don't use plagiarized sources. Get your custom essay on
“ Coffee – Brazil ”
Get custom paper
NEW! smart matching with writer

Harvested red, they are placed in water so that the good berries will sink and all the debris will float. The berries are then pulped to extract the beans, there being two beans per berry, the beans having a bluish-green color. Next they are dried and cured for several weeks, becoming hard and yellow.

Roasting is next, at the high temperature of 900 degrees Fahrenheit for 17 minutes, then they are stored (aged) and eventually ground into coarse granules. One is obliged to wonder how this all came about: who was the first to decide that roasting the beans would do anything good to them? The decaffeinated type of coffee is made by treating the green beans with chlorine-based solvents prior to the rest of the process. There are some 30 species of the plant, the most important being: Brazilian, Mild, Robusta (or “African”) and Arabian, the last being the predominant tree of the Americas.

Discovered by Arabs traveling in Ethiopia in the 13th century, it was taken to Arabia and flourished at Mocha in Yemen, where the Arabic name for it was “qahwah” and from that word to “coffee”. It’s popularity steadily increased. In the 1500s it arrived in Turkey, and in Italy in the 1600s. About this time, establishments for preparing the drink (“coffee houses”) sprang up all over Europe.

In 1714 the French succeeded in bringing a live cutting to their island of Martinique, and, from that single plant, coffee growing spread throughout Central and South America. Meanwhile, the Portuguese introduced the plant into their colony of Brazil, where it took readily. In fact, Brazil today produces 25% of the world’s coffee, and Central and South America combined produces two-thirds of the world’s supply. Since coffee grows in Java and Southeast Asia, an alternate name for coffee is “java”. Then Starbucks came along and showed how coffee could be jazzed up by adding other things to it. At a hefty price. 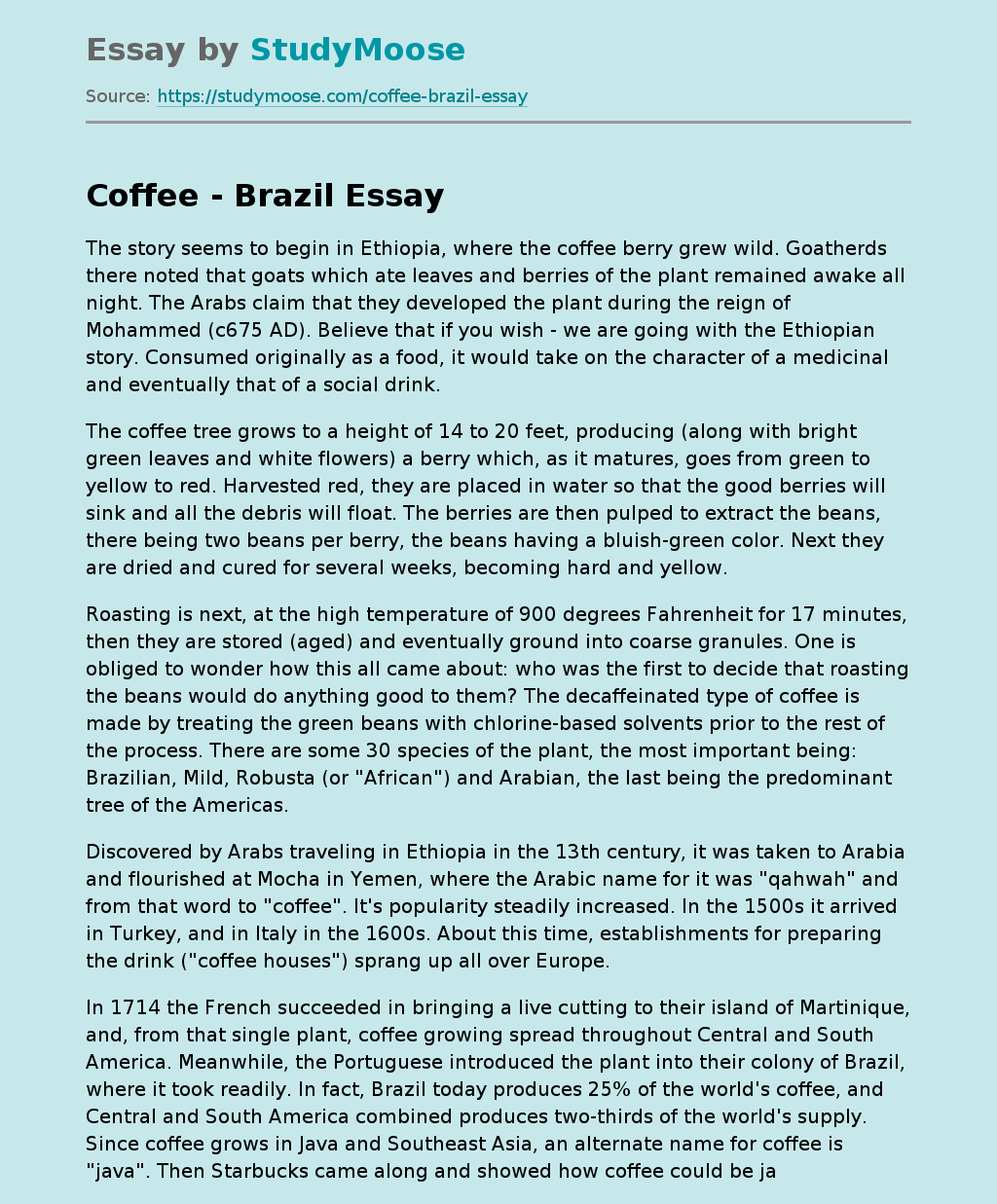