The origins of the language of Swahili

The name Swahili derives from an Arabic word Swahili, the plural of sahel, which means coast. The Swahili are the descendants of the Arabs who came to the East African coast and intermarried with the Local Bantu-speakers. Arab traders sailed down to the coast on the north-east monsoon winds, between November and April, and sailed back up to south-west on the reverse monsoon winds, between June and October, already in pre-Islamic times. The coast, the land of Zenj to the Arabs, was inhabited by peoples of undetermined origin-perhaps by Bushmanoid groups, by Bantu speakers, perhaps by Cushitic-speakers, perhaps even by people of Indonesian ancestry(who had settled in Madagascar as early as the first millennium A.

Don't use plagiarized sources. Get your custom essay on
“ The origins of the language of Swahili ”
Get custom paper
NEW! smart matching with writer

D. and conceivably could have settled further north as well).

Initially Arab immigration was scarce, settlement was sparse and it was limited to the islands. But it did occur, marriage with the women of the coast took place and the first seeds for the eventual emergence of a Swahili culture were sown.

The shirazi are also descendants of interracial marriages but in this case it was the Persians who came to the coast. Shirazi is derived from the Persian word Shiraz, the capital of faz in Persia. The Swahili and Shirazi people have almost indistinguishable from each other. They are mainly traders and small businessmen. Trade was increasing. The material attractions of East Africa were ivory, rhino horn, turtle shell, and slaves. The three most important dialects of Swahili are Kiunguja, spoken on Zanzibar and in other mainland areas of Tanzania; Kimvita, spoken in Mombasa and other areas of Kenya; and Kiamu, spoken on the island of Lamu and adjoining parts of the coast.

Standard Swahili is based on the Kinguja dialect.

The origins of the language of Swahili. (2020, Jun 02). Retrieved from https://studymoose.com/swahili-new-essay 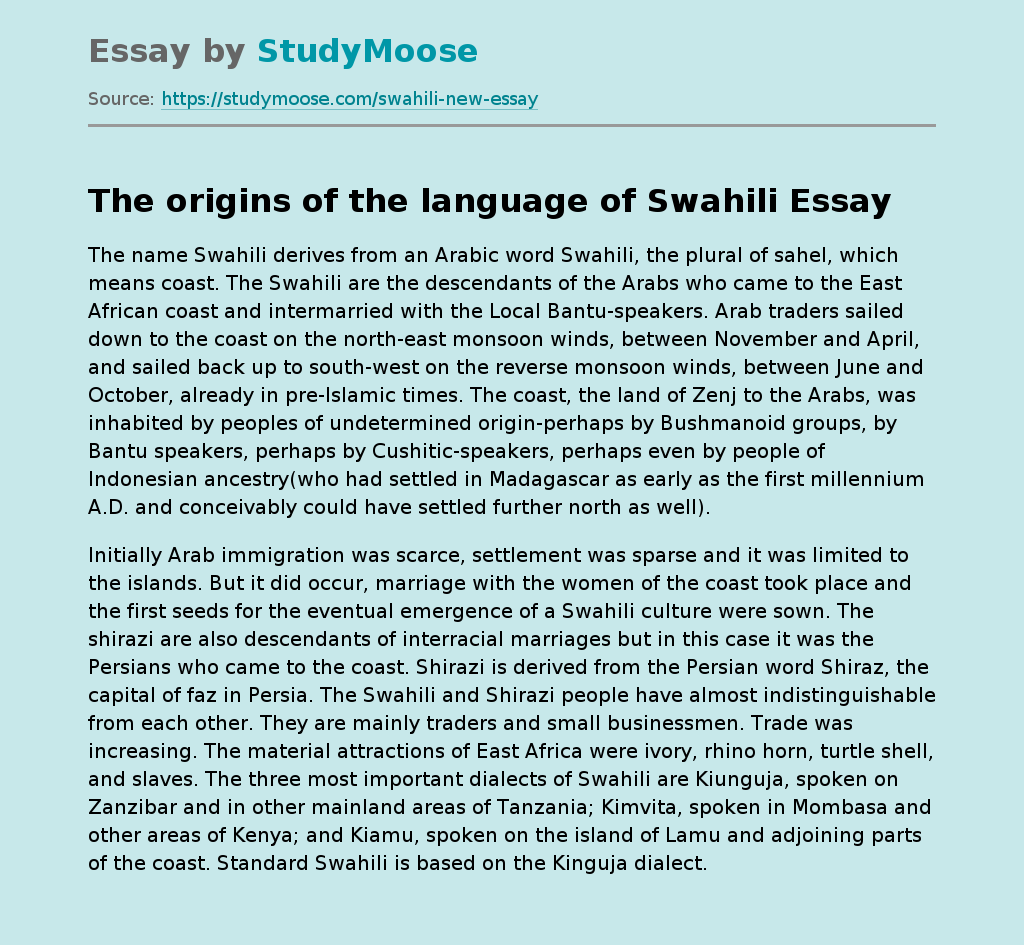