Don't use plagiarized sources. Get your custom essay on
“ Chinese Schools and Education ”
Get custom paper
NEW! smart matching with writer

For this and other reasons, students from Chinese schools often excel in public examinations especially in Science and Mathematics. The other attraction of Chinese schools is that students are required to learn an additional language, Mandarin, which is a highly marketable skill in the job market. Chinese Education: A Historical Perspective The beginnings of Chinese education in Malaysia can be traced to the early nineteenth century. It was recorded that by 1815, there were already three Chinese schools in Malacca.

One was founded by the London Missionary Society.

With regard to the other two, sociologist Yang Qinghuang suggests that “at least one would be a school founded by the Hokkien people. ” Scholar Zheng Liangshu suggests that some old-type Chinese schools might have existed in the Straits Settlements since the end of the eighteenth century. For a long time, Chinese schools in the Straits Settlements received neither help from the British government nor assistance from the government in China. Despite this, they thrived —funded mainly by clan and dialect associations.

When faced with political and financial difficulties at the turn of the twentieth century, the Ching government of China changed its attitude towards overseas Chinese and began to promote Chinese education outside of China. It implemented educational reforms based on a proposal by Zhang Zidong. Following the reforms, the curriculum was revised to include Chinese Classical Literature, History, Geography, Mathematics, Moral Education, Physical Education and other optional subjects like Commerce and Drawing.

In Malaya, Chung Hwa Confucian School in Penang not only adopted this new curriculum (it was the first to do so), it went further to include English as a subject. Support from the Ching government, however, was short lived. It ended with the fall of the dynasty. Chinese schools that attempted to run modern educational programmes (with a modern curriculum and incorporating English as a subject) faced enormous challenges. On the one hand, they were constantly in need of more funds.

On the other hand, they lacked competent teachers. Furthermore, they had to compete with the more established English schools. Even so, there were five hundred Chinese schools with modern educational programmes established in Malaya and Singapore in 1920. By this time, textbooks for these schools had departed from the classical into the vernacular Chinese language (baihuawen). Because of their impressive growth, the British government decided that it could no longer afford to ignore Chinese schools.

On 29 October 1920, it introduced the Regist ration of School Ordinance to restrict the activities of Chinese schools in the Straits Settlements and Federated Malay States by way of registration and inspection. In 1935, control was further tightened: textbooks and teachers from China were prohibited. Only local materials and Malaysian-born teachers were allowed, and activities in Chinese schools came under strict scrutiny. Despite these challenges, Chinese education continued to thrive until it was suspended at the time of the Japanese Occupation of Malaya.

After the war, Chinese schools resumed operation. By 1946, their number had ballooned to more than one thousand in Malaya. However, following the Barnes and Fenn-Wu Reports (June 1951) and the Education Ordinance 1952, Chinese education was exclude d from the national education system. The Chinese community rallied to form Jiao Zong (United Chinese School Teachers Association of Malaya, UCSTAM) and Dong Zong (United Chinese School Committees Association of Malaya, UCSCAN) to safeguard Chinese education. The Malayan Chinese Association (MCA) joined in.

Its president then, Tun Tan Cheng Lock spoke these memorable lines, “…Chinese in Malaya … should be given Chinese education … The dialect or mother tongue can be likened to a person’s shadow, and is inseparable from the person himself/herself… ” (translated from Chinese). Efforts to safeguard Chinese education became even more difficult following the Razak Report in 1956 and the Education Ordinance in 1957. Thereafter, Chinese primary education was officially included in the national education system, classified as standard-type primary schools with Chinese language as the medium of instruction.

However, Chinese secondary schools were excluded from the system when the Lower Certificate of Education examination (L. C. E) was introduced in English. This was not in accordance with the promise of fairness to other ethnic languages in the country as specified in the Razak Report. Furthermore, the Chinese community were horrified by the terms of reference in Paragraph 12 of the Razak Report: “…the ultimate objective of educational policy in this country must be to bring together the children of all races under a national education system in which the national language is the main medium of instruction.

” Paragraph 12 was subsequently omitted following strong opposition from the Chinese community headed by Jiao Zong. Both the Rahman Talib Report (1961) and the Education Act (1961) reaffirmed the education policy as stated in the Education Ordinance 1957. Since government financial aid was vital to the survival of Chinese secondary schools, more than half of the 41 Chinese secondary schools then had little choice but to ‘convert’ itself into English medium national type secondary schools. On hindsight, many Chinese view this decision as a big mistake.

The remaining 14 schools refused to give in, and have remained ‘independent’ to this day. The MCA facilitated this ‘conversion’ as it was satisfied with the verbal promises made by the Education Minister that “the government has no intention to exercise its authority granted under the Act to change Chinese primary schools to national schools” and that “Chinese schools are allowed to allocate one third of their curriculum for learning Mandarin and Chinese literature. ”

As a consequence of this concession made at the secondary school level, development of Chinese education in Malaysia was restricted thereafter to the primary school level. The New Education Act 1996 posed an even bigger threat. It threw into question the status of national-type schools that were not established under Section 28 of the new Act. In fact, prior to this during the initial stage of implementing the ‘3R system’ (Reading, Writing & Arithmetic) in 1980, Chinese schools had already been challenged to forgo their medium of instruction. Materials for learning all subjects except Mandarin were available only in Bahasa Melayu.

In response, Dong Jiao Zong and various Chinese guilds and associations submitted a memorandum to voice their opposition to the Ministry of Education in 1981. The schools were given the assurance that the government had no intention of changing the character of Chinese schools. However in the ensuing years, Chinese schools were asked to consider the concept of ‘integrated schools’ (1985) and Vision Schools (proposed in 1995, implemented in 2000), in addition to the latest “2-4-3” resolution that sought to introduce the teaching of Mathematics and Science in English (proposed in 2002, implemented in 2003).

Despite these challenges, Chinese schools seek to maintain emphasis on the “Five Aspects of Formal Education in Confucianism (Wuyu Jiaoyu)” namely, moral (de), intellectual (zhi), physical (ti), social (qun ) and aesthetic ( ei) education. Until today, Chinese schools m continue to value discipline, respect for the elderly, courtesy, personal character and morality, rather than marketable skills such as computer literacy, Mathematics and Science. Some Reflections How does the development of Chinese education affect the church community i Malaysia?n Should we stake our claims to citizenry and defend our right to be educated in our own (mother tongue) language?

What about racial integration? Is it possible to promote Chinese education without further polarising the different communities? First, we have a moral basis for defending Chinese education. Being given the choice and having the opportunity to be educated in one’s own language is a universal human right according to the Universal Declaration of Human Rights 1948. Chinese education ha s existed in this country since the nineteenth century.

As such, I believe we ought to defend the right of its existence in the same way as we would for the education of other ethnic communities in their own languages. Second, there is value in the Chinese school culture that is worth speaking up for. Even though outsiders might consider the Chinese community uncompromising in its stand with regard to educational issues, it must be pointed out that it is not just about safeguarding the Chinese language but it is also about retaining the ideals of holistic education.

Furthermore, Chinese schools have a tradition of nurturing dedicated schoolteachers, and the Christian community should be at the forefront to encourage this culture of service and excellence. In the past, many of them have had to pay a high price for their conviction and dedication by becoming ‘martyrs’: Zhuang Xiquan, Chen Taomin and others were deported for opposing the Registration of School Ordinance 1920; Lim Lian Geok and Yen Yuan Chang were deprived of citizenship in 1961; Lim Huang Sheng and Sim Mow Yu were jailed under the Internal Security Act in 1987.

The question we must ask is, is this acceptable or healthy in a multi-ethnic society like Malaysia? Most advocates for Chinese education would argue that it is less than ideal but what choice do they have? If national schools were to adopt a more holistic philosophy, and their teachers showed a more credible record in terms of commitment and disciplining of students, and if they provided students with the opportunity to study their own languages, racial integration would be less of an issue and Chinese students would be more evenly distributed between national and Chinese schools.

Despite this obvious shortcoming related to racial integration, I still advocate Chinese education for what it offers. Clearly, through its holistic philosophy and track record, it has produced many responsible citizens through the years. Chinese education continues to play a significant role in nation-building and church life in Malaysia. Florence Kuek lectures Mandarin at Universiti Teknologi Mara. 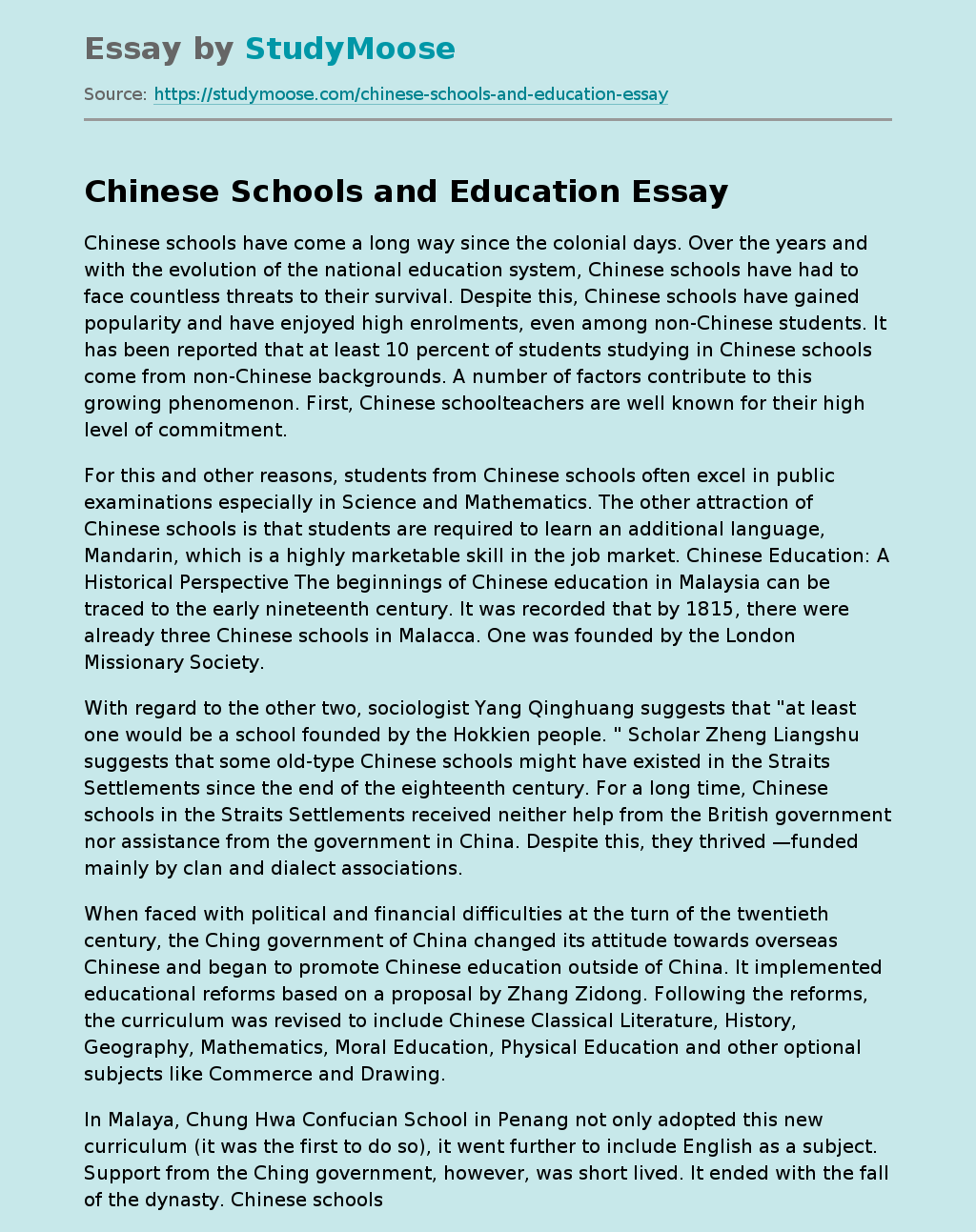