Why Do We Celebrate Children’s Day?

In India, Children’s day is celebrated on the 14th November every year. As a tribute Children’s Day is celebrated on the first Prime Minister of India, Jawaharlal Nehru’s birthday. Lovingly called ‘Chacha Nehru’ which means Uncle Nehru by the kids, Jawaharlal Nehru gave emphasis to the significance of giving love and affection to children, who are the bright future of India. The main purpose of this day is to encourage the welfare of children all over the country.

Don't use plagiarized sources. Get your custom essay on
“ Why Do We Celebrate Children’s Day? ”
Get custom paper
NEW! smart matching with writer

The first ever Children’s day was celebrated in 1954. The idea of a universal Children’s Day was suggested by Mr. V.K. Krishna Menon and it adopted by the United Nations General Assembly. At first it was celebrated universally in the month of October. After 1959, November 20th was chosen as Children’s day as it marked the anniversary day when the Declaration of the Child Rights was adopted by the U.N. General Assembly. In 1989 the Convention on the Rights of the Child was also signed on the same date.

However, in India, Pandit Jawaharlal Nehru’s birthday was declared as Children’s Day and is celebrated annually to cherish his love and attachment for children.

Children are like precious gems. Understand the significance of children’s day which is celebrated on 14th November in India. Children are adorable. They are like divine gifts that parents get from the almighty. Their eyes are full of innocence. They smile when they receive love and admiration, they cry when it is their first day at school away from their parents, they giggle when they mingle with their buddies, and they signify nothing but the pure and faithful love.

They truly symbolise god. 14th November is celebrated as children’s day in all over India. 14th November is also the birthday of Pandit Jawaharlal Nehru, the first prime minister of independent India. Childhood memories are sweetest of all. They can be savored for a lifetime. Children’s day celebration is fun for the little ones but it is important for the parents too. Every parent must understand the importance of the children’s day. Parents should be well aware about the little desires of their angels. Chacha Nehru’s love for children Do you know why Pandit Jawaharlal Nehru’s birthday is celebrated as the children’s day? Pandit Nehru was a great leader. He worked passionately for the welfare of children and youngsters soon after independence. He was keen about welfare, education, and development of children in India.

He was fond of children and thus became popular as Chacha Nehru (Uncle Nehru) among his little admirers. Nehru was very particular about the progress of the Indian youth. He wanted to create responsible citizens out of young boys and girls. Under his regime he established several educational institutions including All India Institute of Medical Sciences, Indian Institutes of Technology, and Indian Institutes of Management. He included and highlighted the point in his five years plan that every child in India would get free and compulsory primary education. Over thousands of schools were built through out the villages of India when Nehru was in power. He also brought the scheme to distribute free meals and milk to school children in India to prevent malnutrition. Pandit Jawaharlal Nehru himself was destiny’s child. He struggled a lot for the welfare of India. It is believed that he admired two things a lot, red roses and children. His love and passion towards children is the reason why we celebrate Children’s Day on his birthday. Why do we celebrate Children’s Day? Children’s Day celebration is the tribute to childhood.

John Kennedy, 35th US president has quoted it rightly, ‘Children are the world’s most valuable resource and its best hope for the future.’ We cannot hide the fact that many children in India are not getting basic privileges like education. Many children are earning money instead of playing with toys. The true essence of children’s day is to understand the significance of childhood in our lives. The values and disciplines learned as a child are responsible for the kind of adulthood one has. Thus childhood is special and should be celebrated. Children’s Day is to remind all young and adults about children’s right to enjoy their childhood without any boundaries and to be educated adult in the future. Children’s Day is to revise the right methods of raising children. Children’s Day Celebration 20th November is Universal Children’s Day. In India lots fun activities and programs are organized on the children’s day. Children’s Day is called as ‘Bal Divas’ in Hindi.

On this particular day government, NGOs (non government organisations), schools, and some private bodies conduct competitions and events for children. Various cultural programs are organized through out the schools. Special television programs for children are broadcasted on 14th November. Parents too are eager about children’s day. Some parents buy gifts for their sons and daughters. Some parents give greeting cards to their children to express their wishes on this special day. As parents we should not let this day pass as other ordinary day. It is our duty to make children’s day special for our child. You may take your child to visit some NGO or children’s home on this day. You can imbibe some precious values in him though generous acts. Your child can give away some of his belongings to other poor children. In such a way he will get to know the real significance of this day. Make every 14th November special for your child. After all, ‘Children will not remember you for the material things you provide them but for the feeling that you cherished them.’

Why Do We Celebrate Children’s Day?. (2016, May 24). Retrieved from http://studymoose.com/childrens-day-essay 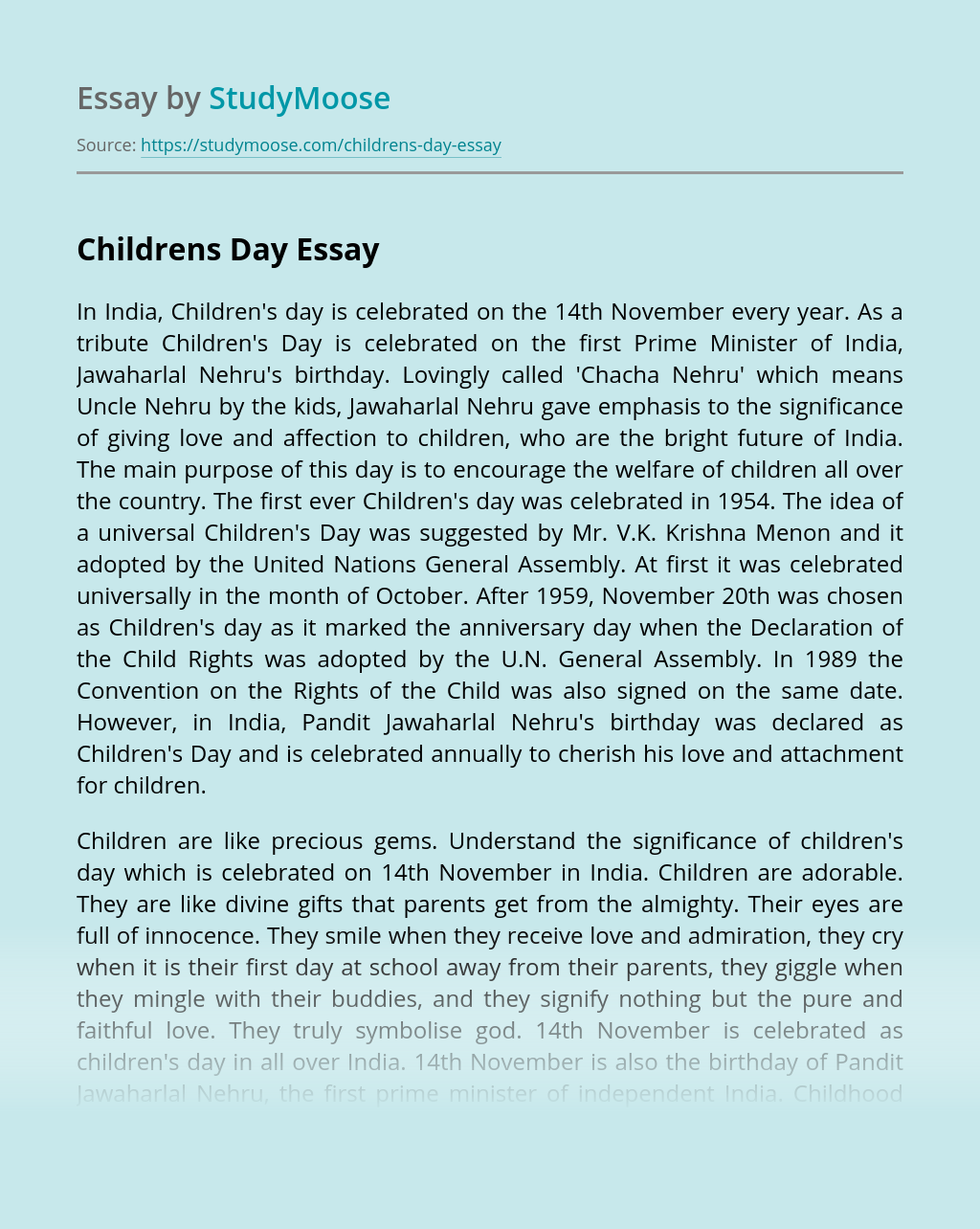