Early childhood educators play an important role in observing, recognizing, and supporting children’s development (Charlesworth, 2014). In this report, child E has been chose to be observed with different observing methods including running record, anecdotal record and learning story. Child E is a 3 years old boy. His father is a New Zealander, and his mother is from China. He is the only child in his family. Child E dose not speak Chinese but only English, this is due to the reason that both his parents speak English at home and his mother does not want him to learn Chinese.

Don't use plagiarized sources.
Get Your Custom Essay on Child Study Report Just from $13,9/Page

Child E was born in New Zealand and he dose not know much about Chinese cultural. He attends at the center five days per week. His mother often drops him in the morning around 10am and the father picks him up around 6pm. Moreover, child E has just been transferred from the toddler room to the pre-school room two weeks ago.

Child E and I know each other in the toddler room. In my report, I will focus on physical and socio-emotional developments and link them with development theories and concepts. I will also discuss how these two domains inter-related to the children’s holistic development.

Physical development is an essential domain that is extremely important for children’s development. The physical development of child E can be seen in all the observations. G. Stanley Hall and Arnold Gesell developed Maturation theory. According to the theory, maturation and growth occur together and they are interrelated. In another word, while a child is physically growing up, the nature and quality are changing as well. “Growth is what happens; maturation is how it happens” (Gordon and Browne, 2014). Furthermore, Gessell transferred his ideas of maturational process into the developmental milestones. The milestones indicate a child’s ability achievement at a certain age (Petty, 2010). The developmental milestone is a useful tool for early childhood teachers due to the reason that teachers can know what a child should achieve at specific ages. This can help teachers to plan and implement learning experiences for children. Also, the physical growth and development are closely related to children’s essential health and wellbeing (New Zealand Tertiary College [NZTC], 2014).

The physical experience supports children’s motor skills development. Using touching as an example, in observation one, child E patted the teacher and other children to get their attention. Instead of hitting or grabbing hardly, he patted gently. Child E experienced and developed the skill of controlling his motor when touching other people. Moreover, it is stressed in Te Whāriki (Ministry of Education [MoE], 1996), although there is a pattern of learning and development, teacher should see each child as an individual and every child follows their own rate of development. Thus, the physical development is not always predictable.

To further explain this, in observation one, the action of poking shows the skill of using fine and gross motor. Child E and children J both can poke with the brush well, but their ages are different. In observation three, all the children joined the activity (musical statues) are 3 or 4 years old. They have different levels of balancing skills. In addition, Freud’s psychosexual stages also indicate deferent stages’ main development. He stressed the daily events and experience help children’s physical development in every stage (Berger, 2001). Child E is learning and developing his physical skills in every day life.

Besides the theories discussed above, there are also some other factors that influence children’s physical development. Genetic make-up is the internal factors, and there are external factors include nutrition, exercise, social-cultural context, family care and health care services (NZTC, 2014). Genetic factors have impacts on many areas of development. In observation two, child E asked for more food is an example of his body’s natural needs. Social-cultural factor plays a significant role in the physical development. A child’s family vale and believe will influence the child. For instance, in observation two, child E left all the vegetables and only ate the rice and meat. Teachers already talked to his mother about this, and his mother believes the child know what to eat or not. She dose not want to encourage him to eat more vegetables.

Instead, she asked teachers to give child E more meat. I also found that in the morning, when child E’s mother drops him at the center, E often has a chocolate muffin or other food high in sugar and fat as his breakfast. A current New Zealand research (Theodore, Thompson, Wall, Becroft, Robinson, Clark, Pryor, Wild & Mitchell, 2006) found that an unhealthy diet would lead problems like diabetes, obesity, asthma and heart disease in young children, which will influence them a life-long time. Also, an unhealthy and unbalanced diet would cause undernourished problem of children. It has a huge impact on children’s physical development (Berk, 2013).

The physical development is closely associated with other development domains. In terms of cognitive development, while children develop their fine and gross motor skills, the brain is stimulated and developed as well (Gordon & Browne, 2014). Take observation three as an example, while child E was finding his balancing with the motor skills, he also used his brain to control his gross and fine motor. Moreover, in the activity, he also used words like ‘move’ and ‘stop’ with his physical movements. His language learning was encouraged as well. Also, physical development inter-relate in relation to children’s social and emotional development, which will be discussed later.

Through all the four observations, child E showed his strong social skills and he was eager to communicate with others. A child’s social and emotional development is affected by both biological nature and the environment surrounds him or her. The different genetic factors and the other external factors influence children behave differently (NZTC, 2014). Building a positive relationship with children is essential for supporting emotions in young children. Supporting children’s emotions in a caring and social context can help the early childhood children to build a secure attachment relationship (Berk, 2013). It is stated in Te Whāriki (MoE, 1996), children will show their confidence only when they have built up the sense of belonging and secure at an environment. In observation one, child E chose to take a chair and set right next me. He is new to the pre-school environment, so he felt a little bit of insecure.

He knows me from the toddler room a long time ago, so he feels emotionally safe and comfort around me. According to John Bowlby’s young children feels more comfortable around the person they attached to (Berger, 2001). Turning to Sigmund Freud’s theory, he considered personality as a key part of every child’s development. He believes a newborn baby is governed by the id, which is the source of desire and motives that we born with (Berger, 2001). Erik Erikson further developed and modified Freud’s psychoanalytic perspective of development.

Erikson sees the surrounding society as an important factor for every child. He believes that children develop from the interaction with surrounding environment, and a child and his/her environment have influence on each other (Berk, 2013). Most importantly, he added the parent-child relationship as a new interactive aspect. As we talked above, in the physical development part, child E’s mother’s believe obvious has an impact on child E’s eating habits. In the second observation, child E left all the vegetables in the bowl. This might be due to the reason that his parent’s allow him to choose what to eat at home.

Different from both Freud’s and Erikson’s view, learning theorists emphasize the role of external forces in children’s social and emotional development. Behaviourism and social learning theory are the two most well-know learning theories. Behaviourism theory focuses on children’s behaviour and it sees culture as a key element of children’s learning. Behaviourism believes that environment can stimulate and elicit children’s responses (MacNaughton, 2003). From the four observations, child E was responding to his surrounding environment a lot. He was developing through interacting with his teachers, peers and toys in the environment. In the first observation, the teacher in pre-school room set up the painting activity to provide opportunities and encourage children to explore.

Child E then chose to join the activity. E saw child J’s action and copied it. This is how child E learned from his surrounding environment. Social learning theory is closely linked with Behaviourism. It is because that socialization involves learning about how to behave in a social group. In social learning theory, children are active learners. They develop an understanding of self-awareness and social roles. Modeling, imitation, observation and self-efficacy are the main concepts of this theory.

Children will then find out their abilities of doing a task. When they believe that they are good at the task, it is more likely they can overcome the difficulties. Otherwise, they could give up easily (Crain, 2000). In observation 2, child E was trying to keep balance. When he found out that balancing is little bit hard and his peers said he was out, he stopped trying and felt emotionally uncomfortable. In the contrast, observation 3 shows that he was confident at building the station. Thus, when he needs to rebuild it, he did not give up.

To sum up, I have discussed two developmental domains through analysing four observations. Child E has achieved a big improvement in both physical and socio-emotional developments. Moreover, all the developmental areas inter-related with each other, together, create a holistic curriculum for early childhood children. 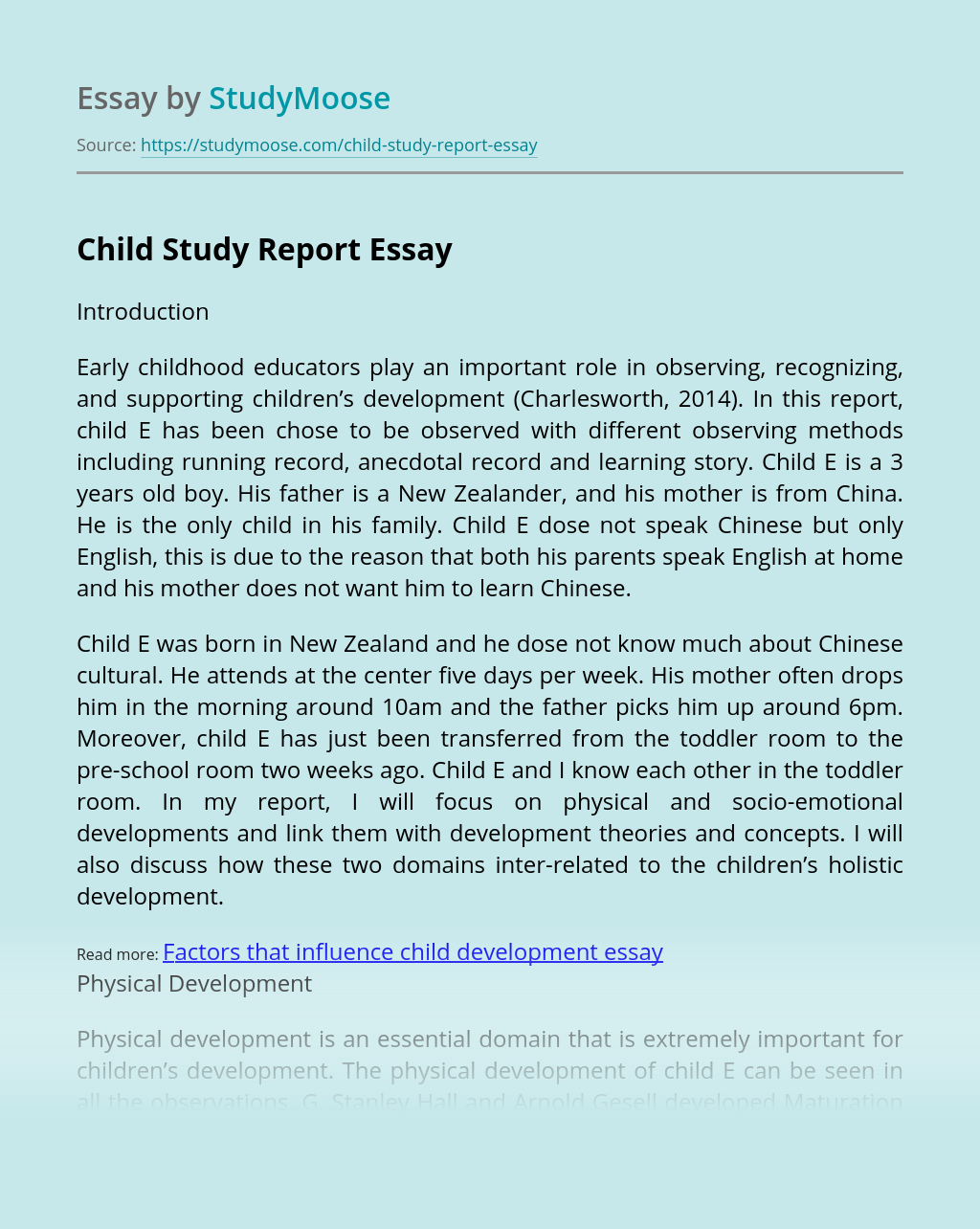 Early Childhood Early childhood is the term given to the stage that begins at infancy and lasts till the age of six (Chaloux, 2014). This time period is one of learning, development and growth – and is referred to by some educational psychologists as the “preschool” years. Features of Cognitive Development Language An infant’s brain...

Asses the view, that working class children underachieve because they are culturally deprived

Middle class kids have a greater propensity of attaining more than pupils of the working class. A couple of explanations take note on the external factors outdoors school. This includes cultural deprivation– working class pupils are depicted as having a lack of correct mindset, worths, language and understanding for educational success. Whilst material deprivation means...

Get Essay
How a Work Setting Can Encourage Children

It is crucial for children to feel they can express their feelings and opinions, sometimes kids require aid in doing this. If they feel they can not express them they might end up being annoyed and show unwanted behaviour. This is why its crucial to listen to what the kids desire to do, the factor...

BUILDING RELATIONSHIPS Building a positive relationship with colleagues and children is important in the workplace, it helps you and others feel comfortable with their interactions. You will feel happier and supported and supportive towards others. SHARING IDEAS AND THOUGHTS Sharing ideas and thoughts with others in the team keeps everybody on the same plan of...