In this lab, a mixture of naphthalene (C10H8), common table salt (NaCl), and sea sand (SiO2) will be separated using the separation techniques in order to demonstrate the properties of mixtures and their ability to be separated by physical means. INTRODUCTION:

This lab was based on the separation of the components of a mixture. A mixture can be defined as a physical combination of two or more pure substances. Separation techniques are used to separate components that are not chemically combined.

Don't use plagiarized sources.
Get Your Custom Essay on Chem Lab Mixtures Just from $13,9/Page

All of these techniques involve changes in the physical state of a chemical compound rather than chemical changes.

The 5 separation techniques are……
1) Sublimation: involves the heating of a solid that passes directly from the solid phase into the gaseous phase.

The reverse process where a gas goes into the solid phase is called deposition or condensation. 2) Extraction: involves using a solvent that selectively dissolve one or more components from a solid mixture. 3) Decantation: involves the separation of a liquid from insoluble solid sediment by carefully pouring the liquid from the solid without disturbing the solid. 4) Filtration: involves separating a solid from a liquid through the use of a porous material such as filter paper. The porous material allows the liquid to pass through it but not the solid. 5) Evaporation: involves the process of heating a mixture in order to separate a volatile liquid in the form of a vapor, while the remaining component dry.
The mixtures that will be separated are naphthalene, common table salt, and sea sand. The separation of this mixture involves three steps which are heating the mixture to sublime the naphthalene, then dissolving the table
salt with water to extract and evaporating water to recover dry NaCl and sand.

To determine the percentage of each component in the mixture, this formula can be used. % component= grams of component isolated
grams of initial sample

C. Separation of the Water Insoluble Solid
1. Add 25mL of distilled water to the solid in the beaker. Heat gently and
stir continuously for 5 min. 2. Weigh a second clean, dry 150-mL beaker with 2 or 3 boiling stones to nearest .001g and record its mass onto the data sheet. 3. Assemble the apparatus for gravity filtration as shown in Figure 3.4 4. Fold a piece of filter paper according to the technique in Figure 3.5. 5. Wet the filter paper with water and adjust the paper so that it lies flat on the glass of the funnel. 6. Position beaker 2 under the funnel and pour the mixture through the filter, first decanting most of the liquid into beaker 2 and then transferring the wet solid into the funnel. Collect all the liquid in beaker 2. 7. Rinse beaker 1 with 5-10-mL of water, pour over the residue in the funnel and add the liquid to the filtrate. *Repeat this step once more. 8. Place beaker 2 on the wire gauze with an iron ring and ring stand and heat using the Bunsen burner. As the volume of liquid is reduced, sodium chloride will appear. When the liquid is fully evaporated, allow the beaker to cool down. 9. Weigh the beaker, stones, and the solid residue to the nearest .001g. Calculate the weight of the recovered NaCl by subtraction.

D. Drying the Sea Sand
1. Weigh a third dry 150-mL beaker and transfer the sand from the filter paper to beaker 3. 2. Place beaker 3 with the sea sand on the wire gauze with an iron ring and ring stand and heat the sand to dryness. When dried, the sand should be freely flowing. 3. Allow the sand to cool to room temperature.

4. Weigh the beaker and the sand to the nearest .001g.
5. Calculate the weight of the recovered sand by subtraction.

In this lab certain separation techniques were used and learned. When measuring the different amounts of the three components of the mixture, all measurements were based on significant figures. Thus, each certain digit plus one uncertain digit was included in all measurements. First, the sublimation of naphthalene was done by heating the mixture. The original weight of the naphthalene collected was .070g and after sublimation the
weight of naphthalene was .095g. Next, extraction was observed in separation of the water insoluble solid. The NaCl was separated from the SiO2 because of the solubility of NaCl in water and the insolubility of SiO2 in water. Solubility is the ability of a substance to dissolve when in the presence of a certain solvent. The NaCl was said to dissolve leaving only the insoluble sea sand in the beaker with the water. Filtration was also observed in this experiment when the piece of filter paper was wetted and used for gravity filtration. The NaCl dissolved in the water, and by decantation, the process of separating a liquid from a solid by gently pouring the liquid from the solid so as not to disturb the solid, the NaCl solution was separated from the SiO2. Heating can cause substances to evaporate, which represents a change in state, so the water was evaporated from the NaCl, which left behind the solid NaCl. The amount of NaCl in the experiment was measured to be 0.822g, but the original sample with the weight of the beaker included actually weighed 65.001g.

Then, the remaining component of the mixture, SiO2, was measured to be .927g once it had dried out. Originally the weight of the beaker and SiO2 was 67.078g. The comparison between the measured masses of the three different substances in the mixture and the actual masses of the components proved that the substances of mixtures are able to separated, yet still retain their chemical and physical properties. After the components of the original sample were successfully separated, their weights were added together. The measured total weight of the three separate components of the recovered solids was 1.844g. The percentage yield and percentage of all the substances was found. The percent yield was found by dividing the mass of the recovered solids by the mass of the mixture, then multiplying the answer by 100. The percentage yield for this experiment was 88.314%.

The makeup of that 88.314% is divided between naphthalene at 4.550%, NaCl at 39.368%, and sea sand at 44.397%. Sources of Error: Ideally, the total percentage should have been 100%, because substances are neither created nor destroyed during these physical separation methods but due to minor errors such as incorrect measurements, could have caused this slight deviation from the actual total. One possible lab error that may have affected this outcome is that some amount of naphthalene may have been lost to the air, thus resulting in a lower calculated mass. or because there was not enough ice on top. It can also be possible that accurate weighting
measurements of the mixtures were not taken.

Conclusions:
The main concept I learned that was being applied and studied in this lab was that mixtures can be separated into their components by physical means. The purpose of the lab is to become familiar with the methods of separating substances from one another using decantation, extraction, and sublimation techniques. Mixtures occur in everyday life in materials that are not uniform in composition. It is a combination of two or more substances. Mixtures are characterized by the fact that each of the substances in the mixture retains its chemical integrity, and that mixtures are separable into these components by physical means. In this lab, the starting point was a mixture of naphthalene, NaCl (sodium chloride), and SiO2 (sand). In the lab, it was determined that naphthalene can be sublimed from the mixture without having an effect on the other substances. It was also realized that NaCl is water soluble, while SiO2 is not water soluble. Since the SiO2 is not water soluble, is would remain after the water with NaCl was decanted. 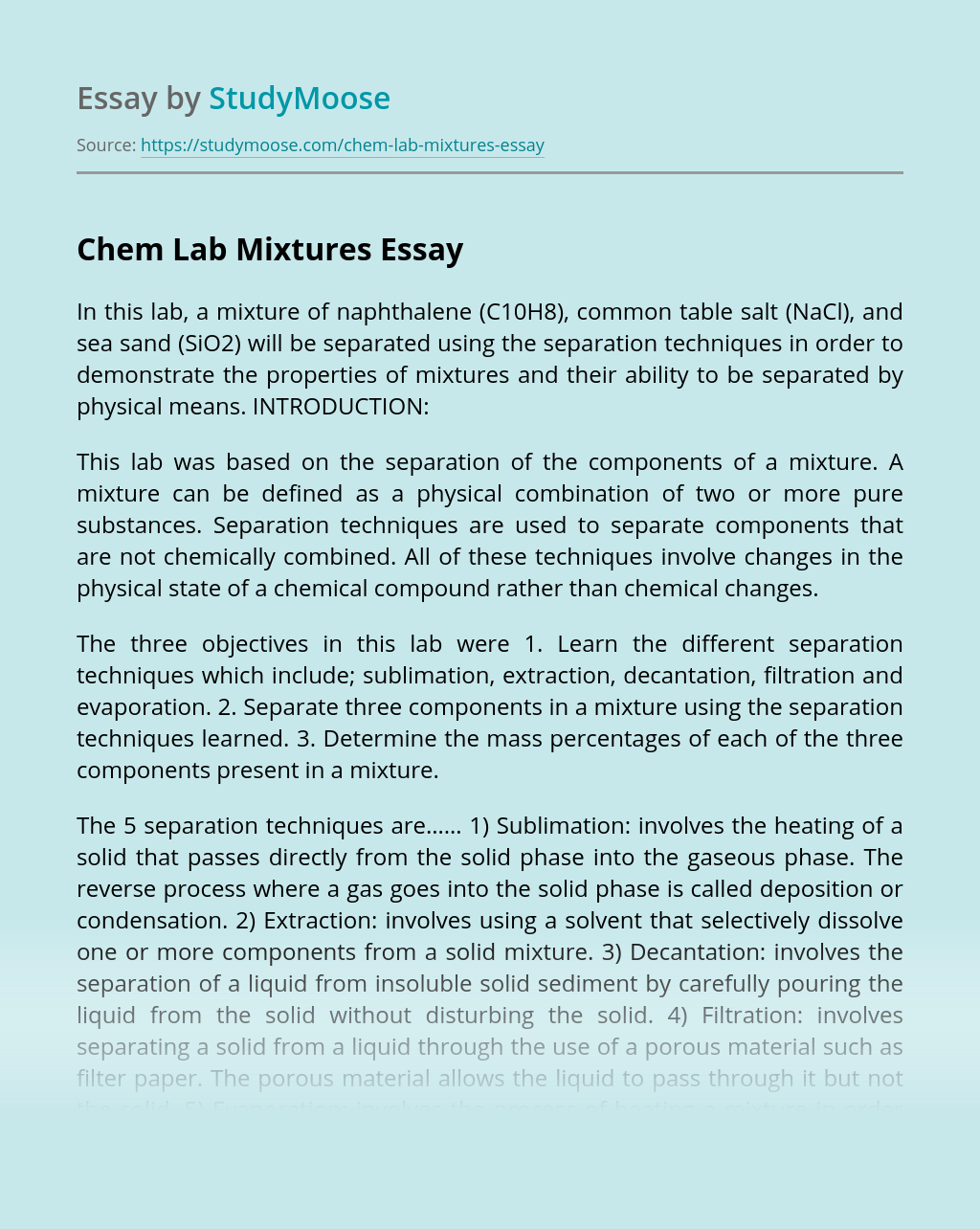 The dissociation of protons from oxalic acid proceeds in a stepwise manner as for other polyprotic acids. Loss of a single proton results in the monovalent hydrogenoxalate anion HC2O4−. A salt with this anion is sometimes called an acid oxalate, monobasic oxalate, or hydrogen oxalate. The equilibrium constant (Ka) for loss of the first proton...

1. NaOH is a very corrosive chemical and contact with it can cause burns to body tissue and possible eye damage. Can irriate the lungs and can cause permanent lung damage. also contact with water can generate enought heat to ignite combustibles. 2. In your own words, briefly explain the terms below. Copied answers will...

Get Essay
Effects of Soil Ph on Radish Plants Growth

Background information: the soil ph can have 2 different impacts on the growth of plant roots. First and most important is how it affects the concentration of nutrients present in the soil itself. This variable varies depending on the ph tendency, in particular, nutrients like phosphorous, potassium ,sulphur, calcium and magnesium tend to drastically decrease...

Role of Chemistry in Our Society

INTRODUCTION Common people may not have the actual knowledge of chemistry and it’s contribution. But they aware of the comforts which science has provided to the society. The modern technology, advances in medicines, fastest means of transport, durable and beautiful clothes, good fertilisers etc. are a few common things will which every one is familiar....

In chemistry, compounds can be distinguished by using the empirical formula. The formula provides the simplest positive integer ratio of elements in a compound. The empirical formula is largely useful in determining the ratio of elements within ionic compounds where the structure is of a non-directional nature of bonding where any ion at any time...