Character of Holden Caulfield in "The Catcher in the Rye"

The Catcher in the Rye by J.D.Salinger introduces character named Holden Caulfield a emotional unreliable narrator. Holden has a lot of social issues and has a problem with being alone. Holden unintentionally became a alienated lonesome character. Holden finds himself in countless situations and does not how to solve them. He realizes how alone he is and wants to change that.

Within the first chapter Holden is at school and he hates his school so much he flunked out on purpose.

Don't use plagiarized sources. Get your custom essay on
“ Character of Holden Caulfield in “The Catcher in the Rye” ”
Get custom paper
NEW! smart matching with writer

Holden is lonesome that he watches a football game from a mountain top. “What I was really hanging around for, I was trying to feel kind of good-by”.(pg 4) Holden goes to football game just to sit on top of a hill he was not there to really enjoy the game he was there to feel like one of the other students. Holden finds himself becoming on top of mountain trying to feel like he was apart of the school and all the other children.

Holden was feeling super lonely one day he ran away. Holden had gotten aboard a train to New York and met Mrs. Morrow who wanted to talk to him about running away. “The first thing I when I got off at Penn Station, I went into this phone booth, I felt like giving someone a buzz but as soon as I was inside I couldn’t think of anyone to call” (pg 58). Holden wanted to call someone in his family and tell them what is going on.

Holden felt so alone that he runs away from school.

Holden soon discovers that he is lonely in New York so lonely he thought of killing himself. Holden got into a scuffle with a pimp because he owed 5 bucks to a hooker. “I felt like jumping out the window” (pg 104). Holden had just gotten hit in the stomach because a pimp said Holden owed him 5 bucks. Holden got so sad and lonely he wanted to die.

In conclusion loneliness is the main theme in this story. Holden learned that he is alone during the events that occurred during the book. Holden left home to become happy or so he thought. Holden becomes even more sad while he is in New York. Holden then thinks about suicide but did not do it because he does not want anyone to see his bloody body and teeth everywhere. Overall this book is very relatable to kids in our generation.

Character of Holden Caulfield in "The Catcher in the Rye". (2021, Jan 28). Retrieved from http://studymoose.com/character-of-holden-caulfield-in-the-catcher-in-the-rye-essay 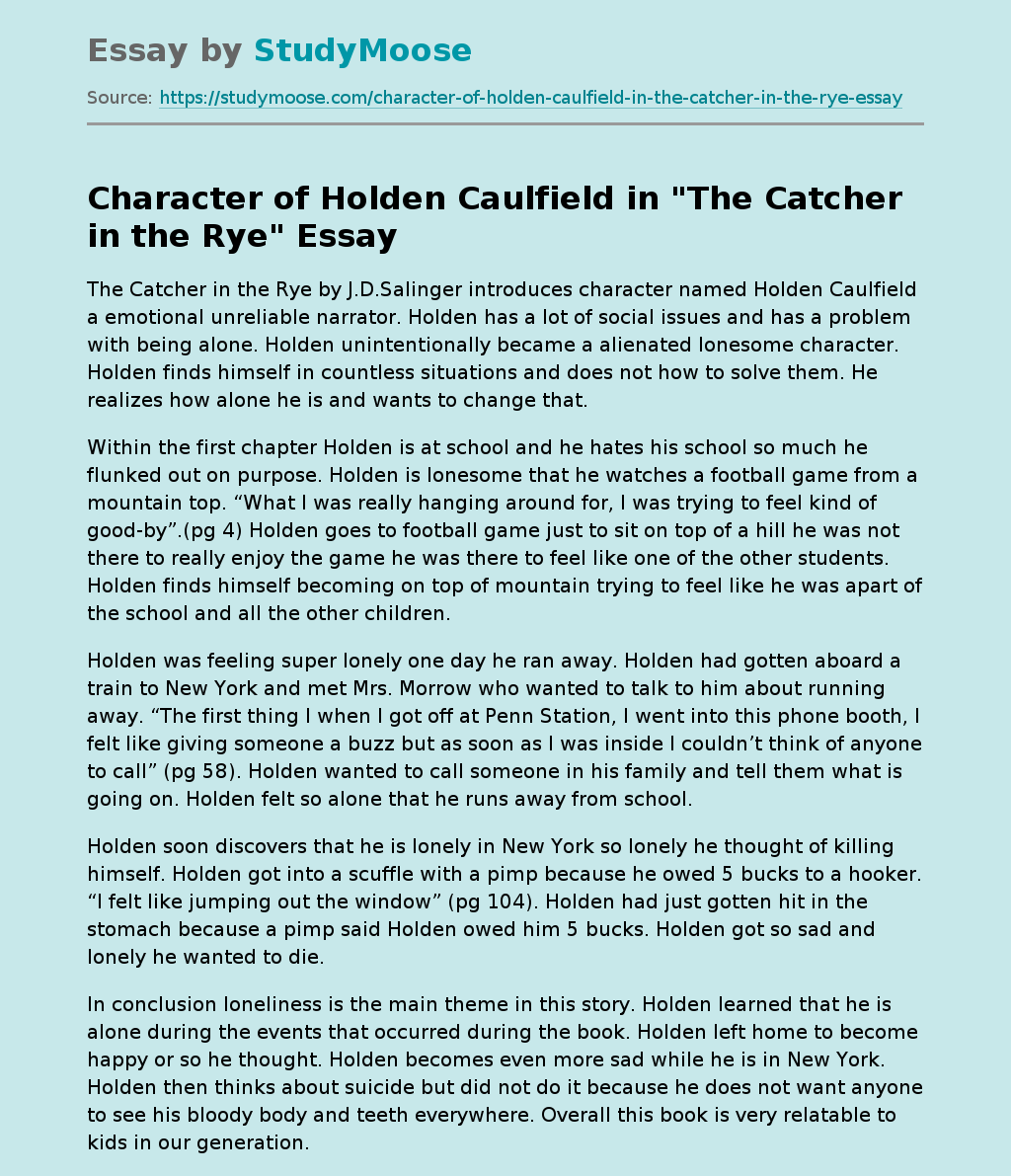