Spain’s Telefonica had the chance to start expanding globally thanked to two significant changes in the economic and political environment: privatization and deregulation. Telefonica was a typical state-owned national telecommunication monopoly when being established and then, the Spanish government privatized it and deregulated the Spanish telecommunications market. It means that Telefonica from a state-owned company became privately controlled. Government also reduced rules to open telecommunications market for more competition. For these reasons, Telefonica had a sharp reduction in the workforce, rapid adoption of new technology and focused on profits and shareholder value and also started expanding globally for growth.

Telefonica was slower to expand in Europe even though Spain is a member of the EU because for years, there had been a tacit agreement between national telecommunications companies that they would not invade each other’s markets. In 2005, this agreement broke down when France Telecom entered Spain and then Telefonica also quickly made its own European acquisition.

First, acquisition is quicker to execute. By purchasing the largest operators, leading companies or monopoly provider, Telefonica quickly become the No.1 or 2 player in almost every Latin American country and had a remarkable market share. If Telefonica had used greenfield ventures, it would have spent years to build the whole new system and also a huge set up costs. Second, acquired firms have its valuable strategic assets such as customer relationships, brand loyalty, distribution systems.

Thus, it is easier and less risky for Telefonica to acquire those assets than to build them from the beginning. Not only Telefonica realize the potentiality of Latin American telecommunications market, many other giant companies also see that and want to run business in this region. By acquiring dominate domestic operators, Telefonica had reduced the chance of other competitors to compete in this market and also make itself stronger in global market. Third, Telefonica believed they could increase the efficiency of acquired firms by transferring capital, technology or management skills.

There are two potential risk associated with acquisitions. Estimating the target firms to acquiring is a complicated task. If Telefonica overestimates the value of those target firms, it will have significant impact on future profits, company may suffer the loss. Besides, the conflict of differences in culture, difficulties in acquiring process or in management and operation can be the risks that Telefonica must face when using this entry strategy.

Telefonica’s FDI can have positive effects on the acquired companies by supplying capital, technology and also management resources that would not be available otherwise. Since Telefonica has experiences in transforming state-own enterprises into efficient and competitive companies, the acquired will be the first to receive these resources transferred. Consequently, employment base will increase due to expansion of newly acquired enterprises. 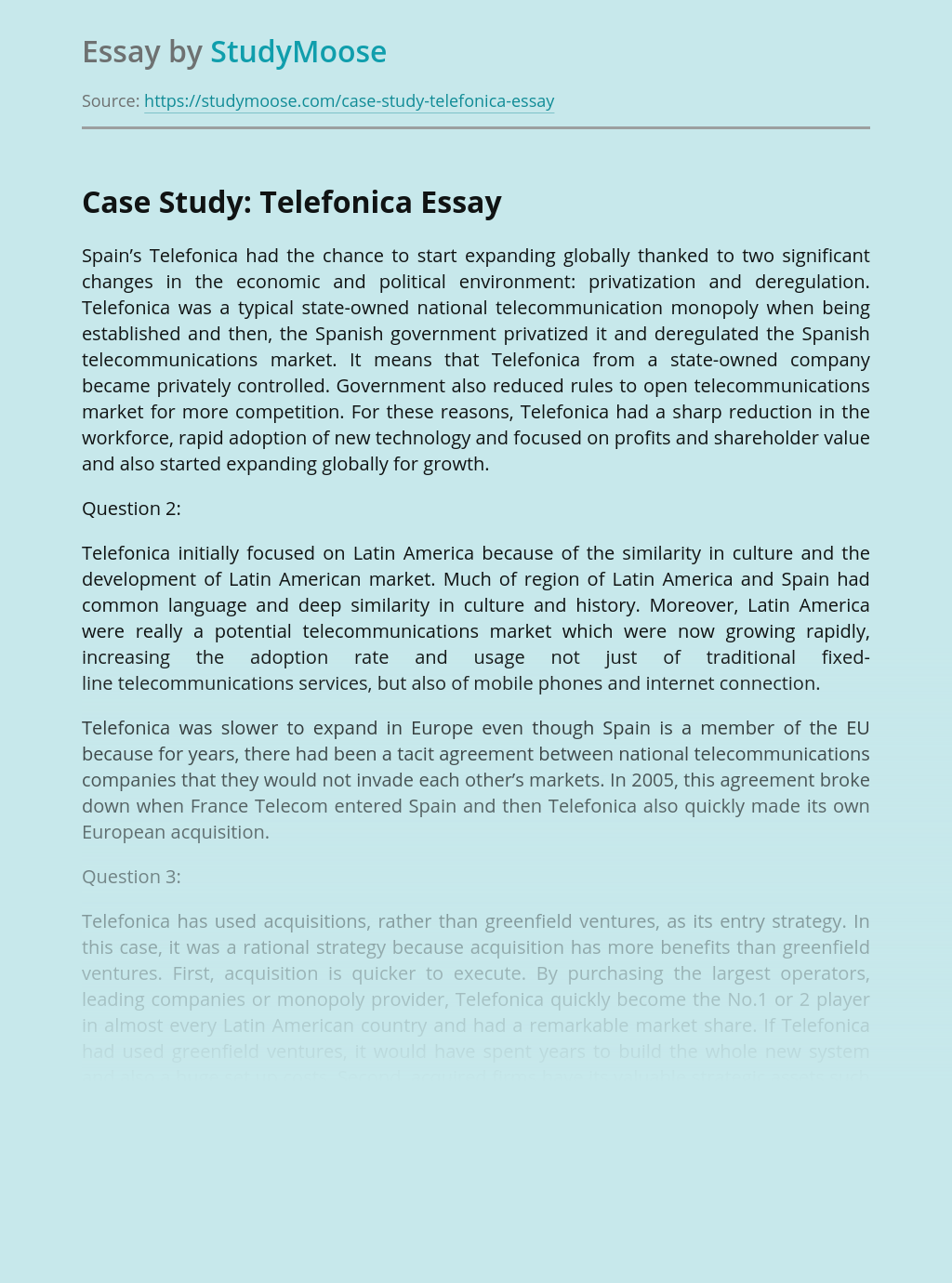