Satyendra Dubey was a project director at the National Highways Authority of India (NHAI). He was murdered in Gaya, Bihar after fighting corruption in the Golden Quadrilateral highway construction project.

He was born at the village of Sahpur in the Siwan district of Bihar, India. The family of five girls and two boys subsisted on a small piece of land, and Bageshwari also held a low-paying clerical position in a nearby sugar mill. Until the age of 15 he studied at the Gang Baksh Kanodiya High School in Sahpur and then joined junior college at Allahabad, about three hundred kilometres away.

Don't use plagiarized sources.
Get Your Custom Essay on Case Study on Satyendra Dubey Just from $13,9/Page

He was admitted to the Civil Engineering Department of IIT Kanpur in 1990, graduated in 1994. Subsequently, he did his M. Tech (Civil Engg.) from Institute of Technology, Banaras Hindu University, and Varanasi in 1996.

He was selected for the Indian Engineering Service (IES) in 1996, India’s top engineering bureaucracy and joined ministry of surface transport.

While at the ministry he once called the police when offered a bribe In July 2002. He was employed by the National Highway Authority of India (NHAI). Dubey became the Assistant Project Manager at Koderma, Jharkhand, responsible for managing a part of the Aurangabad-Barachatti section of National Highway 2 (The Grand Trunk Road). This highway was part of the Golden Quadrilateral Corridor Project, the Prime Minister’s initiative, which aimed to connect many of the country major cities by four-lane limited-access highways totalling 14,000 km, at an overall cost more than USD 10 billion. During this period, Dubey got the contractor of the project to suspend three of his engineers after exposing serious financial irregularities. At one point, he had the contractor rebuild six kilometres of under-quality road, a huge loss for the road contract mafia.

The Golden Quadrilateral project had strict controls to ensure that the construction work would be carried on by experienced firms with proper systems. A second independent contract was given for supervision of the project. While working at his post, he discovered that the contracted firm, Larsen and Toubro, had been subcontracting the actual work to smaller low-technology groups, controlled by the local mafia. Dubey being an honest and upright official wrote to his boss SK Soni (NHAI Project Director) and Brig Satish Kapoor (engineer) about the issue, but the matter was never looked upon and he was transferred to Gaya, a transfer which he opposed since he felt that it did not serve the interests of NHAI.

At Gaya, he exposed large scale flouting of NHAI rules regarding sub-contracting and quality control. Faced with the possibility of high-level corruption within the NHAI, Dubey wrote directly to the Prime Minister, Atal Bihari Vajpayee, detailing the financial and contractual irregularities in the project. This act of his writing the letter to the prime minister proved very costly to him as the letter irked the responsible authorities and On 27th November 2003, he was shot dead while returning back to his home from railway station.

Our Analysis of the Case

Unethical Practices Used in this Case:-

* Larsen and Toubro, had been subcontracting the actual work to smaller low-technology groups, controlled by the local mafia * The Officials had not been doing there jobs effectively and did not take the complaints into Consideration * The Government did not acted to the best of its citizens interests

Some Basic Ethical Principles that were not Followed in this case are:- * Fiduciary – It is derived from a Latin word ‘fiduciarius’ which means holding in trust. It is a legal or ethical relationship of trust between two or more parties (persons). When Mr. Dubey wrote to his boss SK Soni (NHAI Project Director) and Brig Satish Kapoor (engineer) about the issue, they just ignored this issue. As Dubey trusted his boss and co-worker, he thought they can help him in fighting the local mafias but instead of helping him they just want to bury this issue without anyone getting a clue about it.

* Transparency – It is implemented by a set of policies, practices and procedures that allow citizens to have accessibility, usability, utility,understandibility,informativeness and auditability of information and process held by centres of authority. When Mr. Dubey came to know about the Larsen and Toubro(L&T) that they are contracting small low-technology groups for the completion of work which are governed and controlled by local mafia gangs, he found it to be unethical and inappropriate as L&T was hiding the information of the work that it need to complete.

* Reliability – It is the ability of a person or system to perform and maintain its functions in routine circumstances, as well as in hostile or unexpected circumstances. But when Dubey asked his Boss and co-worker by bringing the matter in the lime-light. It was their duty to see and check that all the work was going in a proper functionality manner with no one interfering. But instead of making the system to verify the cons of the problem they just transferred him to another location so that they (especially SK Soni) don’t have to be indulged in the case of L&T work.

* Citizenship – A citizen is a member of a political community who enjoys the rights and assumes the duties of membership. A person who does not have citizenship in any state is said to be stateless. But Mr. Dubey was a citizen of India and as a responsible citizen he wrote the letter addressing to Prime Minister of India Mr. Atal Bihari Vajpayee regarding the unethical practises that were in use by the L&T and the inappropriate behaviour of the concerned people who were in the fashion to hide all these illegal trends from the government and other concerned authorities so that they can easily continue their secrecy work with no one getting a hint about it.

* Responsiveness – The quality of being responsive to a particular situation. Here both the concerned officials and the Government didn’t reacted to any of the letters of Mr. Dubey which were concerned to the local mafia taking the tenders of the works. And due to their lack of responsiveness Mr. Dubey was shot dead while he was returning back from the railway station for his home. All this happened due to lack of initiative of the government. Whistle Blowing too played a major role in lack of the initiative.

What is Whistle Blowing?

Whistle Blowing is the Voluntary release of non public information, as a moral protest, by a member or former member of an organization outside the normal channels of communication to an appropriate audience about illegal and/ or immoral conduct in an organization or conduct in an organization that is opposed in some significant way to the public interest. In this case, Mr Dubey became a whistleblower by raising his voice against the practices followed by some people in the NHAI and tried to bring it to the notice of the government as well as the people which showed his moral protest against the organization. 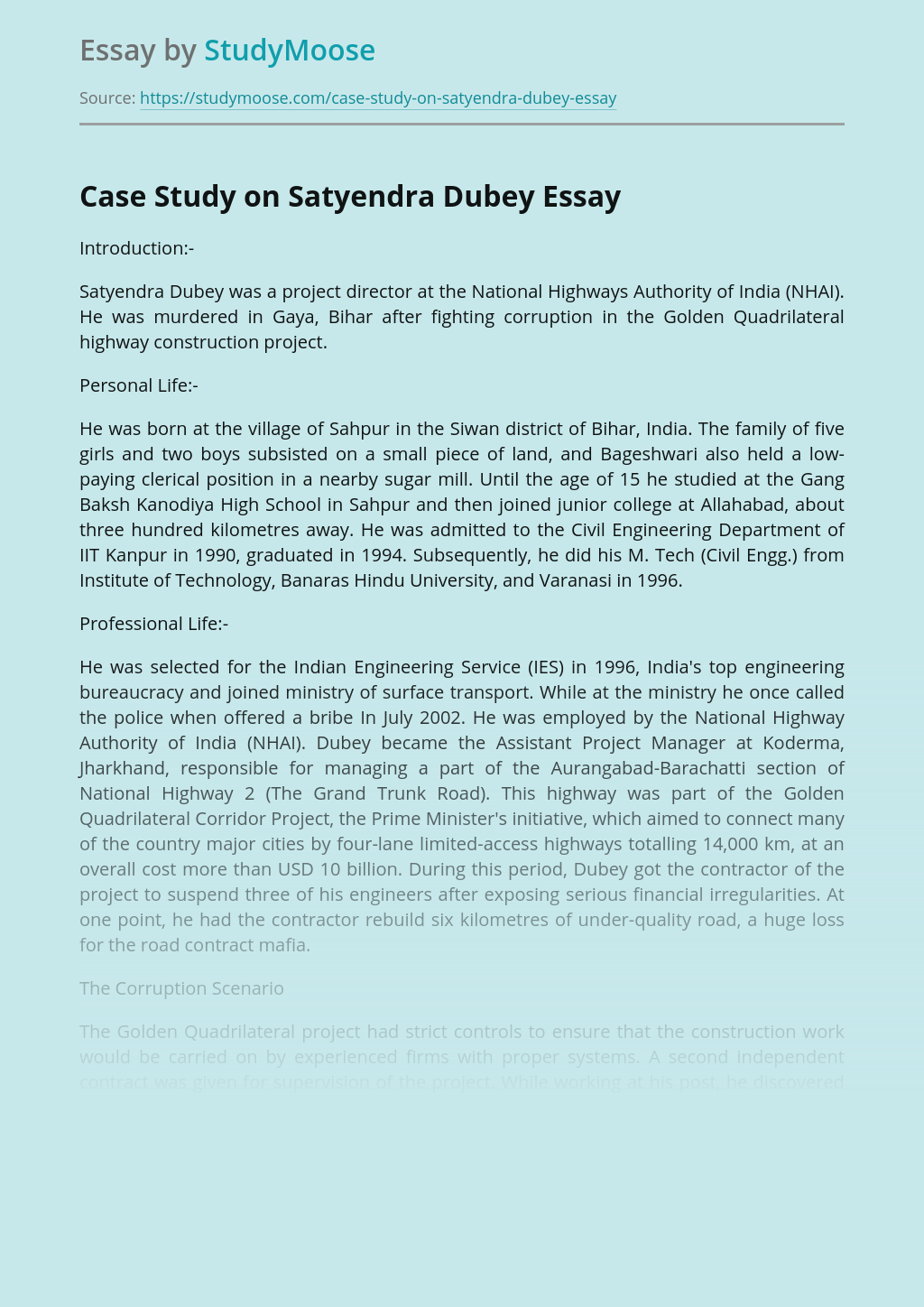 Jon YoungDr. WinderAnimal BehaviorFebruary 6, 2019The Hermit Crab The Hermit crab is one of the most overlooked animals in the animal kingdom. Most of us have seen them walking around in fish tanks at the local pet store with colorfully painted shells at a discount price. These shells not only give a nice visual appeal,...

The first week of the last school holidays was a memorable and meaningful moments for the members of the English Language Society of SMK Kampung Laut.The society has organized a special trip to Seri Kasih Orphanage Home on May 31st the first day of school holidays at Kampung Delima,Batu 8, Pasir Putih.There were a total of...

Classroom management is an important component in any educational setting. This is because meaningful learning takes place when students are in safe environment (Kauffman et al., 2006). A combination of good classroom setting, effective preventive measures for behavior problems and implementation of interesting and engaging curriculums as well as actively involving all students in learning...

India is among the world’s most efficient financial markets in terms of technology, regulation and systems. It also has one of the highest savings rate in the world – our gross household savings rate, which averaged 19% of gross domestic product (GDP) between 1996-97 and 1999-2000, increased to about 23% in 2003-04 and has been...