EBay first entered the Chinese market in 2002 by acquiring a 33% stake in its local counterpart, EachNet, followed by a full acquisition a year later in 2003. Critically assess eBay.s choice of market entry strategy for China, listing both the advantages and disadvantages of its acquisition strategy.

As we know, eBay’s China expansion strategy can be considered as failure, despite the fact that eBay entered this potentially rewarding market with caution. This cautious strategy was very unusual for eBay, because they used full-forced, head-on, .

Don't use plagiarized sources. Get your custom essay on
“ Case Study “Ebay in China” ”
Get custom paper
NEW! smart matching with writer

be-first-or-nothing. strategy in other markets, for various reasons, it would be impossible to implement this strategy when penetrating Chinese market. So acquiring an already comparatively recognizable and well established brand seemed to be the best way to continue eBay’s expansion in Asia.

Without a doubt, Each Net was the best candidate for acquisition at the time. When eBay acquired 33% shares of Each Net in 2002, it seemed to be hugely successful, because in year 2003 the value of Each Net had doubled and market share had rocketed to 85% – this initial success encouraged full acquisition of Each Net.

As we know, the success did not turn out to be long-lasting, despite the fact that in first few years the performance of the company was brilliant. While acquisition of Each Net meant many advantages for eBay, it also implied serious disadvantages.

Advantages of Each Net acquisition:

•Each net had strong financial backing from large venture capital companies
•Immense market potential – 1,23 billion Chinese language speakers all around the world
•Rapidly increasing number of internet users in China – increasing number of potential customers •Each Net in essence was an imitation of eBay, adjusted to fit Chinese customer needs, but with much greater recognition in China
•Increasing popularity of shopping online (also by using Each Net) in China.

Disadvantages of Each Net acquisition:
•Cultural differences and buying habits of Chinese.
•Huge investments required
•Unpredictability of the fast-changing Chinese market – huge risks
•Emerging competitors – TaoBao (Alibaba subsidiary), which outcompeted eBay Each Net in future, by better adjusting to Chinese customer needs and buying habits
•Alibaba had more established presence in China and much better knowledge of Chinese customers – reason for increasing lack of consumer trust in eBay Each Net in future
•Each Net failed to create customer trust in future, while TaoBao succeeded
•Chinese refusal of adopting traditional eBay practices (Pay Pal etc.)
•Lack of interaction possibilities between buyer and seller, provided by eBay Each Net – important for Chinese, TaoBao was much better in this aspect •Comparatively poor customer service

In conclusion, this acquisition, which was probably the right step by eBay, turned out to be failure, despite the fact, that at first it seemed to be a huge success. In my opinion it is because eBay’s management was so overwhelmed with the initial success, that they lost caution – they were very conscious at beginning but failed to adjust to customer needs, they did not pay enough attention to them, which led to eBay Each Net to situation where they were outcompeted by TaoBao in Chinese market.

Assess the potential benefits and risks of eBay’s joint venture with Tom Online.

TOM Online has a good experience in cooperation with Skype and has given great results in it. This shows that TOM Online knows how to present new product in the market and how to increase its market share, which is essential for eBay at the moment. All the aspects of TOM Online show that this company has a great and efficient knowledge of Chinese market and exactly this feature is very necessary for eBay to gain good results. In addition, political connections of the TOM Online can be very helpful in Chinese market, especially in nowadays and situation in China.

Risks of this joint venture are not as great as benefits, but there is a risk to loose a chance to strengthen the eBay brand, because Chinese customers will be focused on the TOM Online and EachNet. There also is a risk of loosing big amounts of money, because TOM Online has a 2% bigger ownership, but in amount of money, eBay invests two times more money, however the success of the TOM EachNet depends more on TOM Online. There also can be assessed as a risk point, that TOM Online is focused on mobile value-added services and their target audience is generally young consumers, but eBay target audience is a little older.

eBay will have a 49% stake in the new joint venture while Tom Online will have 51% ownership. Critically assess both companies’ decisions on their respective percentage of stake

In our opinion E-Bay’s decision to joint venture with TOM Online was a great success. Although E-Bay is a giant and successful company in US and has successfully expanded worldwide, China is a “Hard-Nut” for them. China’s cultural differences and moral values lead them to face some difficulties in setting up eBay business. Chinese people still trust their own companies more and respect them.

TOM Online is a successful company with a good reputation and has already gained trust of millions of customers. Their activity area is also not far from eBay’s – mainly internet and other IT services, and mobile entertainment. TOM Online was also expanding rapidly and cooperating with various influential companies as for example Skype. But lately they also had a decrease in revenues so joint venture also was an opportunity for them. That way they widened their service range and that meant new opportunities.

Why eBay 49% ownership and 51% to TOM Online? Why then eBay still invests more? And why the term ‘eBay’’ disappears from the name of this joint venture – “TOM Eachnet”. We think that that is quite obvious. There are several factors which explain this situation. As we already know the Chinese culture is very different and trust and respect are very substantial terms. So by erasing the US brand name from the joint venture name people would trust it more. Moreover both TOM and Each net are known as local brands.

In this joint venture TOM invests US$20 million and contributes its local knowledge, technology and brand value, which are much more valuable than money – this explains why eBay invests twice as more. Moreover TOM Online has very important persons among their shareholders. This joint venture would open a whole new market segment for both – eBay and also TOM Online, allowing them to fulfill and widen significantly together. They can also let eBay into “mobile world”.

As we all know – China has been always very different and that is the reason why setting up a stable, successful company has been a “hard battle” for others. But it is also a huge amount of customers (almost 1, 5 billion) which then means a great revenue if succeed. eBay EachNet understood than they are too unstable and the stakes are too high, so the joint venture with TOM Online and creating TOM EachNet was the best opportunity.

Increase of the customer base will positively contribute to increase in revenues, customer loyalty schemes may be developed further in order to ensure that more people fall into the category of loyal customers, the services could be improved in order to serve some customized customer needs, a wider advertising campaign may be carried out in order to appeal to a wider market segment, perhaps even trying to work with some niches of the market providing solutions to their problems, satisfying their needs and wants. Look into new pay system or create own (PayPal only in 38 countries) Increasing the number of ways how customers can pay for their purchases will ensure that revenues grow and that a wider appeal will be given to the company – the services will be interesting both to credit card owners, pay pal users thus ensuring that customers can choose the method in which they would like to pay for their purchase – this method will also contribute to the solution of security concerns since people will be able to choose the method they consider to be the safest one.

The Company should look at acquiring shopping comparison sites and vertical search engines to drive traffic and acquire consumers. Ebay should also consider how they can compete with Myspace, facebook and youtube, because a lot of selling is made through these sites, like google adwords is giving great traffic to Ebay, it is also a rival to Ebay, it proposes other similar sites. Company could also enlarge to the mobile sphere. Make eBay available for on mobile phones and PDA’s and others. As that is one of TOM Online activity sphere, it could be easily done and there is already an available previously formed customer group, who could be also very interested in this kind of service. 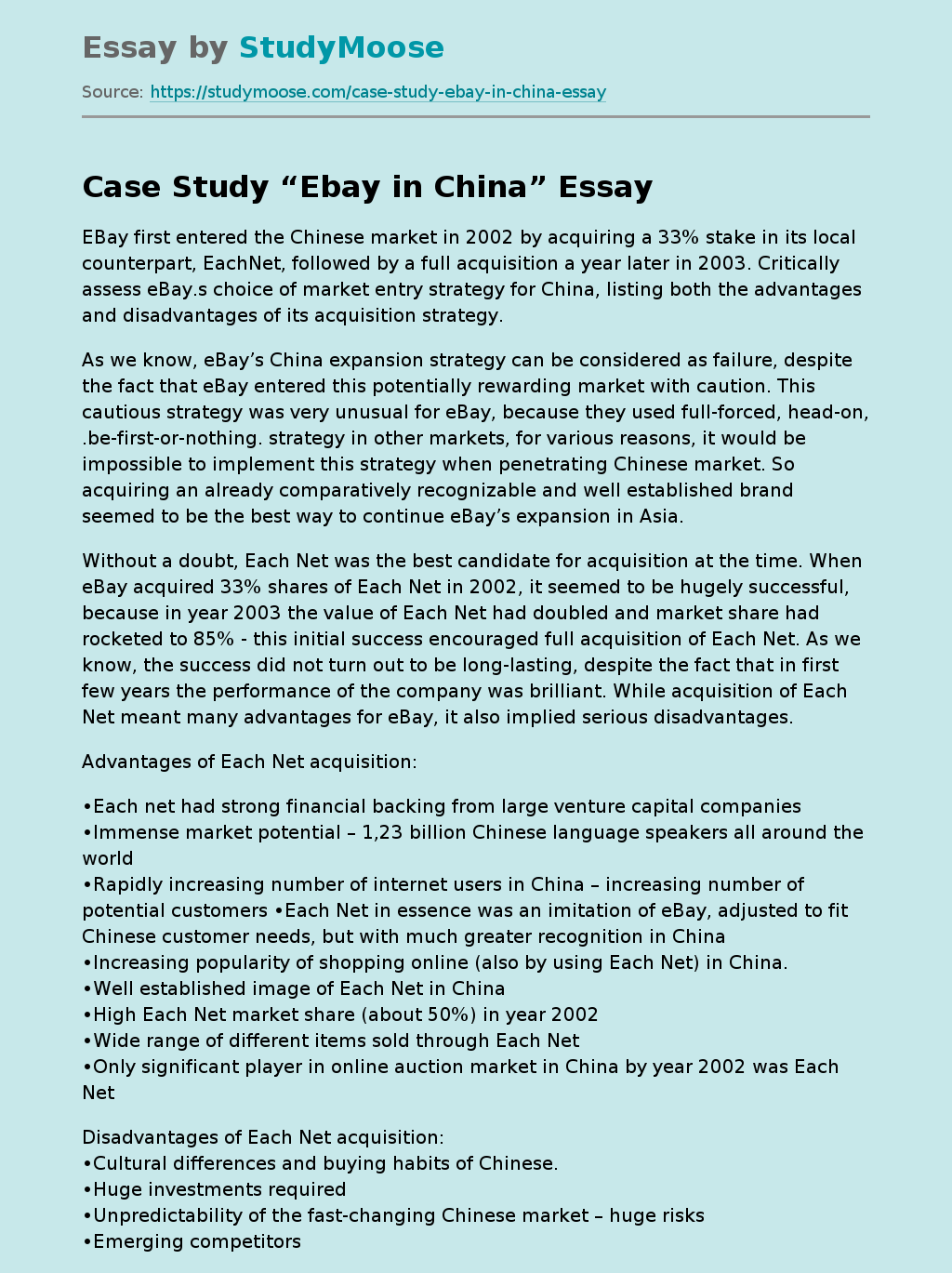