Abigail tries to become the victim here, by telling Reverend Parris that she is struck with a needle by the witchery of Elizabeth, and so they accuse Elizabeth of witchcraft. This affects the audience by showing that Abigail can be a guilt-free assassin, even eliminating people to get her desire. Miller probably did this to show she makes an impact, even when not in the scene. It would become apparent to the reader that Abigail has a gift of manipulating peoples minds and thoughts, twisting people around her finger, making them believe everything she says, even to the extent of making a court believe that Elizabeth is a witch.

Don't use plagiarized sources. Get your custom essay on
“ Care and politeness ”
Get custom paper
NEW! smart matching with writer

Miller writes Abigail to be mostly successful, but I think he made her like this to show off other characters with strong minds that do not fall for her lies. One such person is Proctor, who knows from experience that believing something that would be a lie that she says can bring destruction to your life.

When he sees how powerful her words are, he tries to convince others, such as Hale, that she is dishonest. “I never knew until tonight that the world is gone daft with nonsense”

He tries to mock Hale by stating that anybody who hears and believes a spoilt teenage girl’s words must be insane, as there is no doubt in his mind that they are untrue. Abigail’s crush on Proctor comes to a crashing end as Proctor admits to his affair with Abigail, announcing it throughout the courtroom.

“It is a whore… I have known her, Sir. I have known her. ” He says this to try and turn the judges of the court against Abigail to save Elizabeth, even if it did mean risking his own life, and announcing at the same time that he is a “lecher” to everyone.

This makes a tremendous impact on the play, as I think people only listened to Abigail because of her innocence; and with her affair with Proctor out, she has lost the innocent feeling about her, so she may in fact fear that no one will from now on believe her. This already begins to happen when Abigail distinguishes Danforth’s look of contempt that he gives her as a sign that people are beginning to grow disbelief in her. Abigail becomes depressed towards the end of the play, when she discovers that John Proctor is on the verge of death and all because he wants to be as far away from Abigail and her meddling ways as possible.

When being asked by Danforth about practising witchcraft, he replies that he is, so he is sent to be prison and is soon to be hung. “Will you confess yourself befouled with hell? ” “I say- I say- God is dead! ” He does this as he thinks it would be the only way to get Abigail away from his family forever. This is a key point in the play for a number of reasons. In my opinion, Abigail thought Proctor was her one reason to be living, and now with him gone, she has no reason to stay in Salem.

Miller could have also of done this to add irony to the play; Abigail only started up the Salem witch trials to get rid of Elizabeth and become lovers with Proctor, but eventually, Proctor dies as a result of the trials and Elizabeth remains alive. Abigail may have also learnt a valuable lesson through the trials; never be dishonest, as it may end up causing more damage than relief. Also, the saying ‘what goes around, comes around,’ springs to mind in this situation, as when she tried to hurt Elizabeth, someone who she relates as an enemy, she really hurts Proctor, who she considers as a future partner.

Much like how Miller never wrote a line for Abigail in the Second Act but having her still as a key role simply by being mentioned, Abigail left Salem, along with her family, friends and the Salem witch trials behind her in Act Four. Parris is the one who passes this news on to the reader, as he is seen talking to Danforth. “I think they be aboard a ship… my strongbox be broken into… Thirty-One pound is gone… I am penniless! ” I think he said this as he is bewildered of why she would run away and more importantly to him, why she took all of his money.

I think this would be when Parris realizes that he was wrong, and maybe he thinks that she might have been lying the whole time. This affects the audience by showing them that they had forgotten something about Abigail. Throughout the times we have seen her, she has been very mature, and only wants to concern herself with adult related matters. What most people had forgotten in this time is however old she may try to be, she is just a child; a spoilt child craving attention. When she didn’t get what she wanted, she ran off and sulked.

I think Miller did this to show the audience how much Abigail really hasn’t changed in the play, and she still behaves like a spoilt brat; when the going got tough, Abigail got going, regardless of what anyone else thought or the concerns of anybody else. In my opinion, Abigail is a selfish, sly, yet clever young woman from the beginning throughout. Miller changes her character steadily, but there isn’t too much change. In conclusion, throughout the play, Abigail attempts to seek revenge for what the Proctor family did to her; kick her out of the house and separate her from John Proctor.

Her character does not seem to change much, as she mostly acts innocent to those she wants respect from, and overpowering to those she demands respect from. Then, she has people who she wants revenge with in some way, so she acts sweet and innocent to those with power to get her way. She appears to act like this for quite some time, and only does she act differently when she does not appear at all, because I see this as a way of Miller showing that all Abigail wanted is Proctor, and without him she has no further reason for staying any longer.

I think he tries to compare Abigail’s character with that of Proctor. In the beginning of the play, she was seen as the young innocent girl, whilst Proctor may have been seen, in many people’s eyes as an old pervert, but by the end of the play, readers thought of Proctor as a sort of mortar, as he died for the cause of trying to save his family from Abigail. Meanwhile, some may have been disgusted at Abigail’s behaviour at thought that she in the end was the real ‘bad guy.

‘ Miller also shows largely during the first Three Acts how her real character thinks she can get away with saying and doing anything she wanted to. The way he shows how she reacts to different people shows her real character, especially how she uses her ‘power’ of being the reverends niece to her advantage. She reacts to people in her age group, or people she is intellectually superior to in a more intimidating manor, whilst when she talks to people she has no power over, she speaks with the up most care and politeness.

Much in the way that products are released when a material goes through a crucible, Abigail went through her own personal “crucible” slightly changed, in the sense that she learnt a valuable lesson; She can’t get everything she wants all the time. But other than that, she isn’t very much changed because she is still greedy, selfish, deceiving, convincing and sly, but above all else, unhappy right the way throughout the play. 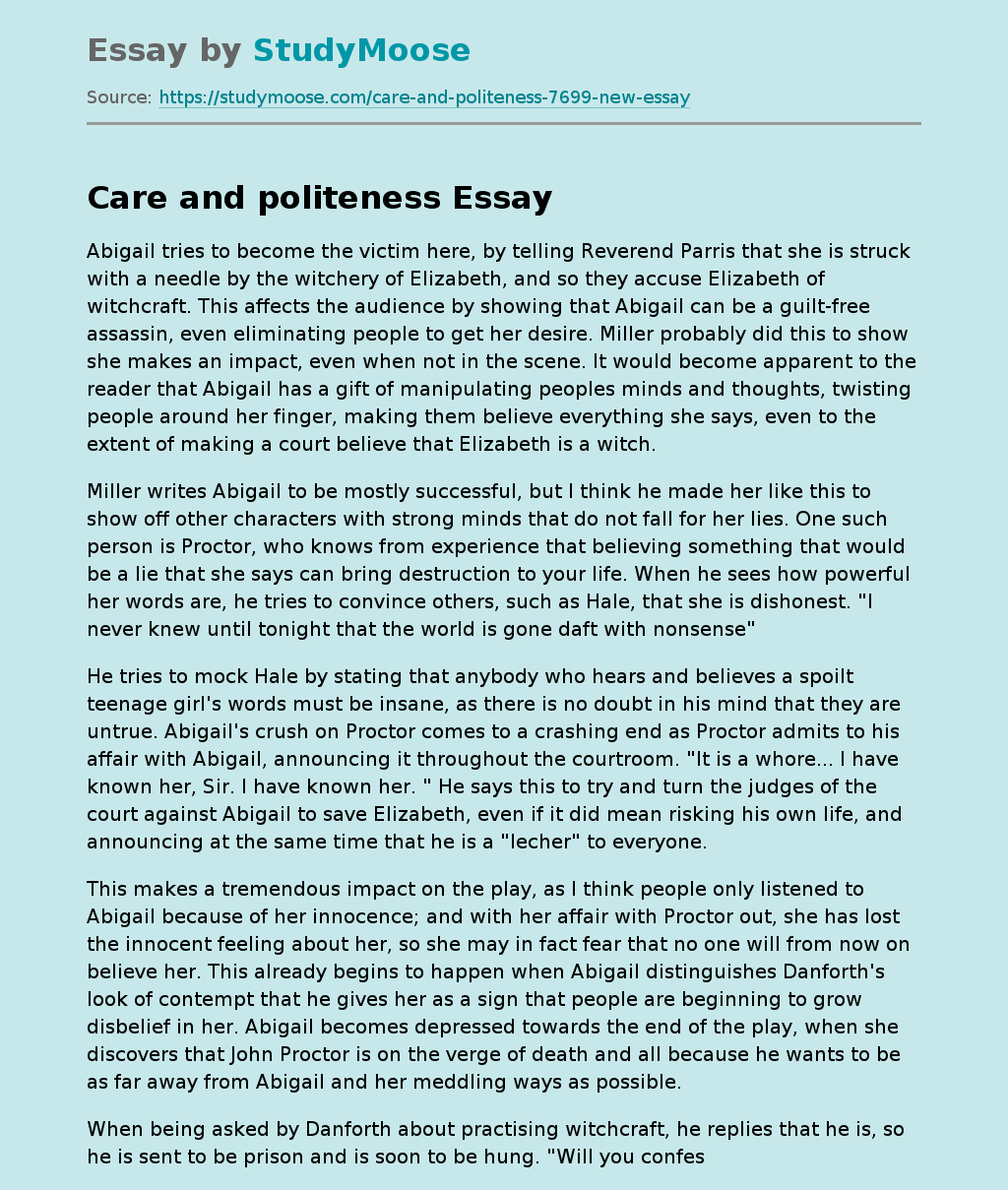