Discuss the role of the ‘Caledonian antisyzygy’ in MacDiarmid’s depiction of the Scottish people, and consider how this relates to his metaphysical explorations in A Drunk Man Looks at the Thistle. A Drunk Man Looks at the Thistle is a poem firmly set in the context of the Scottish Renaissance movement, of which its author was a chief exponent. In MacDiarmid’s attempt to present the Scottish people both to the world and themselves, there is a definite sense of him attempting to re-evaluate a talent they have undervalued and underestimated.

Don't use plagiarized sources. Get your custom essay on
“ “Caledonian antisyzygy” ”
Get custom paper
NEW! smart matching with writer

Moreover, it seems he was trying to shed light on an instinct they knew they possessed but couldn’t put their finger on and didn’t have a name for. But is this ‘Caledonian antisyzygy’ just a piece of literary jargon, wrenched into being by several Scottish academics in order to lend significance and credibility to their ancestors’ penchant for self-contradiction? Were brilliant Scottish idiosyncrasies in artistic expression giving rise to a Scottish Renaissance movement or was a Scottish Renaissance movement giving rise to brilliant Scottish idiosyncrasies in artistic expression?

As MacDiarmid points out in his pamphlet Albyn: or Scotland and the Future, the Caledonian Antisyzygy has been traced though history by Professor Gregory Smith.

A modern reader is perfectly placed to assess its effectiveness in A Drunk Man Looks at the Thistle and its value and relevance, both in its context as part of a piece of modernism in the 1920s and from the standpoint of our society today, when most of MacDiarmid’s battles have been lost and won.

It seems unlikely at first that, by having a drunk man narrate his poem, MacDiarmid will be able to tackle any serious metaphysical questions.

At first glance, it appears to be a humorous device, forcing us to see the world in whisky befuddled vision. It soon becomes clear, however, that this is a ruse for the English reader, who is being afforded a privileged glimpse at the world filtered through a very astute Scottish mind. The drunk man is somewhat a feat of antisyzygy himself, turning out, as he does, to be a sort of wise fool. And, of course, ‘There’s nocht sae sober as a man blin’ drunk’. He is just the right sort of device to lead us through the ‘baffling zigzag of contradictions’ at the heart of the poem.

A drunk man, free of inhibitions can demonstrate, as MacDiarmid wanted, that “this Scottish strain is tremendously idiosyncratic, full of a wild humour which blends the actual and the apocalyptic in an incalculable fashion. ” (MacDiarmid, Albyn, or Scotland and the Future, 1927) The effect to which he uses it in The Drunk Man Looks at the Thistle and the extent to which he acknowledges it in his essays suggests that the poet considered the Caledonian Antisyzygy to be the driving force of what he described as the ‘idiosyncratic power’ (MacDiarmid, ibid. ) of his countrymen.

The piece of Scottish culture and heritage for the English

He wanted to present it as a piece of Scottish culture and heritage for the English to envy and the Scots to take pride in. Obviously, in order to do this he had to show it in action strikingly and convincingly. What better way to prove the worth of the Scottish talent for reconciling opposites than by including it in an unmistakably modernist poem that also draws heavily on medieval language? It is clear that MacDiarmid believed the Scottish community had suffered greatly as a result of anglicisation. The Drunk Man Looks at the Thistle is, amongst other things, a re-imagination of what it is to be Scottish.

Such concepts as the Caledonian Antisyzygy give confidence to a community suffering from a ‘widespread inferiority complex’ (MacDiarmid, ibid. ) and suggest to its people that they have a significant identity: I’ll ha’e nae hauf-way hoose, but aye be whaur Extremes meet – it’s the only way I ken To dodge the curst conceit o’ bein’ richt That damns the vast majority o’ men. This is how the Caledonian Antisyzygy is introduced into the poem. It is very much part of the character of the drunk man who rejects the arrogance of other philosophers with their certainties.

It is used very specifically at times but it is also a general presence in the shaping and character of the poem. Rather than just a name for a specific literary device, invented and used by Scots, the ‘Caledonian Antisyzygy’ is more of a descriptive umbrella term for a fundamental and ubiquitous characteristic in Scottish art and philosophy. Such phenomena cannot exist in abstraction, but belong to and live through people. In his depiction of the Scottish people, MacDiarmid’s use of language is inextricably bound-up with the powerful idiosyncrasies he is examining.

He owes a great deal of his poetic genius to the language itself and is happy to acknowledge it. In reviving old words, he is positively regressing – moving back to move forward. Even the language, regressive and progressive at once, is productive; it would seem, of the Caledonian Antisyzygy. I canna biel’t; tho’ steekin’ an e’e Tither’s muckie wi’ munebeam for knool in’t, For there’s nae sta’-tree and the brute’s awa’ Wi’ me kinkin’ like foudrie ahint . . . Sae Eternity’ll buff nor stye For Time, and shies at a touch, man. 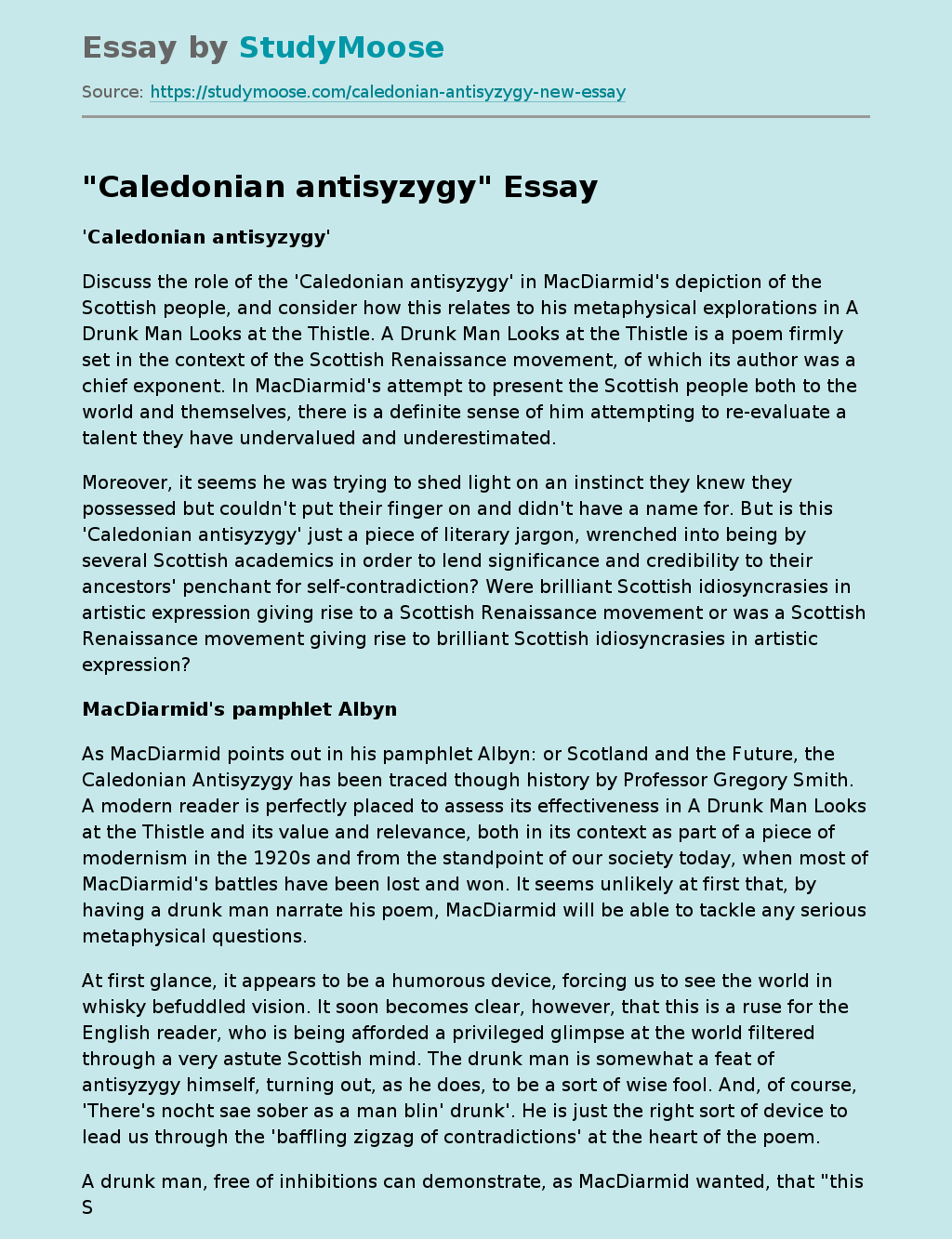