Broadband remote sensing systems such as the Landsat

Broad-band remote sensing systems, such as the Landsat Multispectral Scanner (MSS, 4 bands) and Landsat Thematic Mapper (TM, 7 bands), drastically under sample the information content available from a reflectance spectrum by making only a few measurements in spectral bands up to several hundred nanometers wide. Imaging spectrometers, on the other hand, sample at close intervals (bands on the order of tens of nanometers wide) and have a sufficient number of spectral bands to allow construction of spectra that closely resemble those measured on laboratory instruments (Figure 1).

Don't use plagiarized sources. Get your custom essay on
“ Broadband remote sensing systems such as the Landsat ”
Get custom paper
NEW! smart matching with writer

“Hyperion is probably the future of remote sensing,” says Cramer. Hyperion is a hyperspectral instrument, a change in technology that is like going from black-and-white to color television, Mandla adds. Other remote sensing instruments multi spectrometers measure discreet wavelengths of light. It is as if your eyes could only see red and blue light; you could tell much about the world based on how much red and how much blue you saw, but your vision would have gaps in the green tones. A hyperspectral instrument corrects this color blindness by measuring many more wavelengths of light.

The science behind the hyperspectral instrument is spectroscopy, says current EO-1 project scientist, Elizabeth Middleton (GSFC). “Spectroscopy is the study of constituents of materials using specific wavelengths,” she notes. “Hyperion measures the chemical constituents of Earth’s surface. “Hyperion measures reflected light like many other satellite imagers, but since it is recording more than 200 wavelengths, it can detect the fingerprints of the materials on Earth’s surface.

Hyperion data have found a wide range of other uses, including tracking the amount of carbon plants take out of the atmosphere everywhere from the Amazon rainforest to the Alaskan tundra. It also has been used to find evidence of microbial life in the Arctic and to monitor volcanic activity.

The Lameta formation gained its name from the village Lameta, which is the localite village near the formations. The lameta formation is the most geologically and ecologically diverse landscape in the Jabalpur district in the southern region of the Madhya Pradesh state of India. It is one of the less develop and less distributed region in the state of Madhya Pradesh. It encompasses most of the original and natural features. It is situated on a stable tectonic setting at the Indian peninsula at the banks of Narmada River, in the fields of gondwana lands whose age is carboniferous which ranges in about 1800Ma-2500Ma.

The stratigraphic formation or the lithostratic formation which is pre dominantly made up of sedimentary, metamorphic rock formations mainly occupies an area of 700sq.Km in the total area of Jabalpur dist. which is about 5198sq.Km. This total area of lithostratic formation includes variety of biodiversity and mineralogical changes at different parts of the landscape within itself with a topography that ranges from high mountains, shallow valleys, plain landscape surfaces and some parts with disturb rock formations. The core region of Lameta formation falls in Madhya Pradesh state in the south west direction from Jabalpur city on bank of Narmada River.

Previously, the Lameta rocks were considered to be a part of the Mahadeva sequence. Later, these were found to be much younger (Medlicott 1860).Their close association with the lowermost part of the Deccan Traps, occurring at their top, led them to be identified as ‘infratrappean’ (Pascoe 1964 et. al.).

The Lameta rocks rest upon various older rock formations, such as the Precambrian, the Upper Gondwanas (including the Jabalpur sequence) and the Upper Cretaceous marine Bagh beds of western India (Krishnan 1982). Their thickness is estimated to be below 40m.

The Lameta rock sequence is fairly extensively developed, usually occurring as a narrow fringe around the Deccan Trap hills, in Madhya Pradesh and MAHARASHTRA in particular and in the western part of the Narmada Valley.

The Lameta rocks are ‘said’ to be essentially consisting of limestone, sandstone and mudstone, the limestone being the most typical and persistent one. Occasionally, the limestone may be pure, but generally it is full of sand and small pebbles. At many places, the pebbles are mostly jasper, the rest being quartz, quartzite and local rock fragments. Segregated cherts, as irregular or lenticular masses, often occur within the limestone. Sandy limestone with chert nodules is quite common. The sandstone at the base of the sequence is cross-bedded and occasionally shows an impersistent green colour. Associated with the sandstone, whether at the base or not, are local conglomerates. The mudstone is either red or green coloured and is very frequently sandy or marly, often containing carbonate nodules, a feature which has given its bed the name “Mottled Nodular Beds” in literature. The Lameta limestone, sandstone and mudstone beds often intergrade from one into the other (Pascoe 1964).

The Lameta rocks have locally and patchily yielded a number of fossilized bio elements which include Mollusca, fish, dinosaur bones and egg shells, etc. Presently, the rocks are dated as Maestrichtian from their vertebrate remains (Sahni and Bajpai 1988, Chatterjee 1978).

Broadband remote sensing systems such as the Landsat. (2019, Nov 30). Retrieved from https://studymoose.com/broadband-remote-sensing-systems-such-as-the-landsat-example-essay 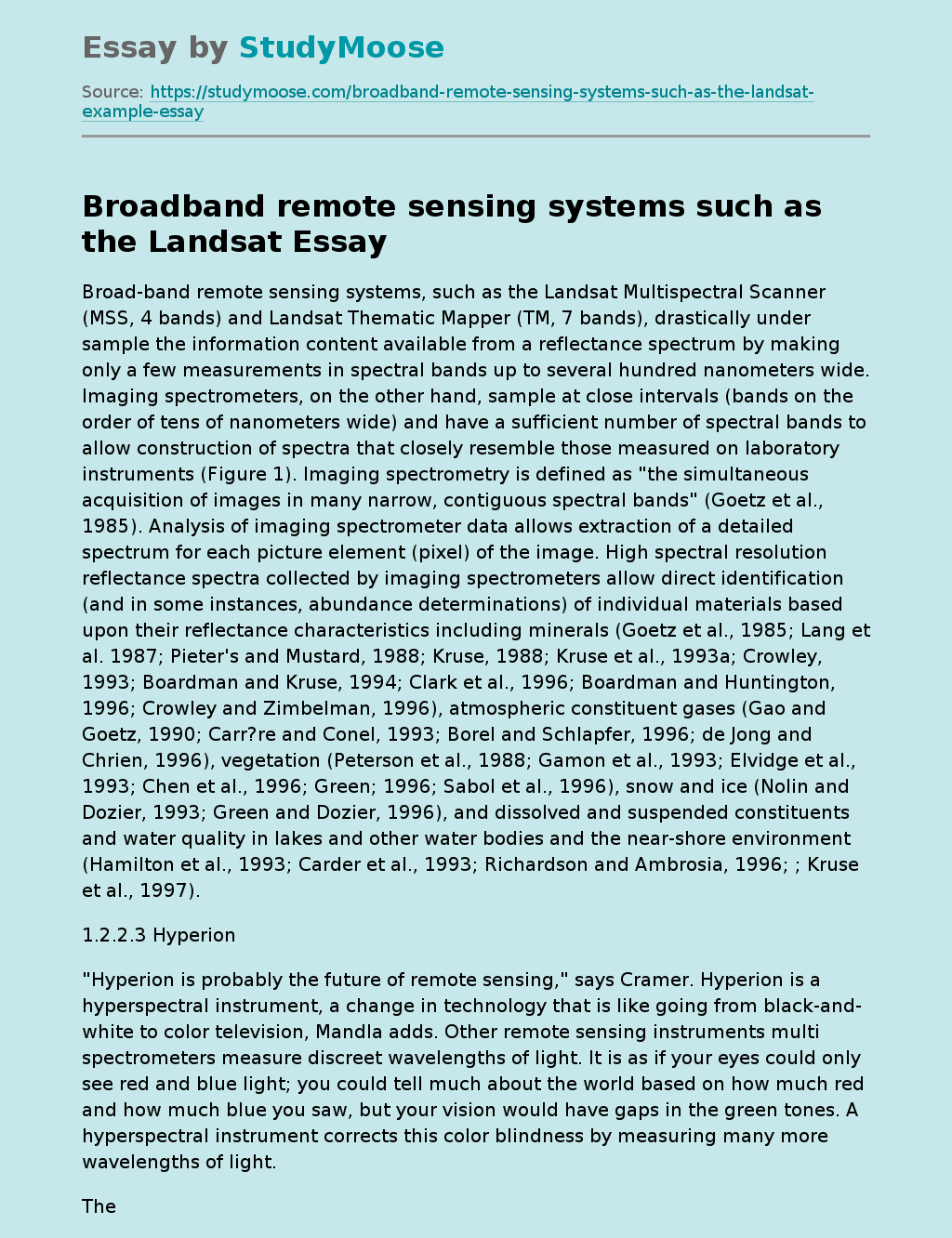