At Harry’s aunt and uncle, Petunia and Vernon Dursley’s house away from the wizarding world and Hogwarts Harry is spending his boring summer. Harry feels isolated from his friends since had didn’t have contact from his best friends from the Wizarding. No one is telling Harry any news about the far against Voldemort. One night a group of dementors (evil magical creatures), that has the ability to suck all the happiness from your soul, suddenly attacked Harry and his cousin Dudley.

Don't use plagiarized sources. Get your custom essay on
“ At Harry’s aunt and uncle Petunia and Vernon Dursley’s house away from ”
Get custom paper
NEW! smart matching with writer

Harry knows that he is not allowed to use magic outside the school, even though the only way to protect them in this situation is to cast a spell. Harry then decides to cast the spell to protect them which will drive the dementors away. Just after Harry was done casting the spell he receives a letter saying that he must attend a hearing at the Ministry of Magic. A group of wizards then brough Harry to his godfather Sirius’s house in London.

Harry finds his best friends Ron Weasley and Hermione ,and a mysterious group, who call themselves The Order of the Phoenix, at his Godfather’s house. Harry Potter goes to his hearing in the spite of the fact that Cornelius Fudge intent on having him expelled. Arabella Figg, Harry’s neighbor is called out as an eyewitness to prove that Harry casted the spell to protect himself. After Arabella and Dumbledore gave their testimonies’ Harry was acquitted. It’s the return for the fifth year at Hogwarts School of Witchcraft and Wizardry for Harry and his friends Hermione and Ron.

Dolores Umbridge is their new Defense Against the Dart Arts teacher that was employed by Cornelius Fudge. Cornelius Fudge has been pressuring the wizarding newspaper to publish stories that is not true about Harry, that people would think of Harry as a disgrace, so that no one will believe his story that Lord Voldemort has genuinely returned. Professor Umbridge refuses to teach her class defensive magic which causes the students for dislike her. Harry and Professor Umbridge started having fights in class, because she called Harry a complete liar, which leads to Harry getting many detentions from her. During these detentions he must write lines using his own blood as ink. Soon Professor Umbridge got appointed as the High Inquisitor of Hogwarts by Cornelius Fudge. She started to restrict students freedom and also banned Harry from the sport Quidditch for life. Harry and twenty-five students started to meet up so that they can learn defensive spells as often as they can. They called their secret defense group Dumbledore’s Army. A strange dream about walking down a corridor with a door at the end of it came to Harry’s mind, but before he can figure out the meaning of his dream he always wakes up. Harry alerts Professor McGonagall about a vision that he had where he is watching from a snake’s eye as the snake attacks Ron’s father; she then takes Harry to Albus Dumbledore. Dumbledore starts speaking to the portraits on his wall and they made sure that Ron’s father was saved. After Ron’s father was saved Dumbledore insisted on Harry to take Occulumency lessons with Professor Snape. The sad part is that Harry doesn’t seem to improve at this.One of the students, Marietta Edgecomb tips of Professor Umbridge about Dumbledore’s Army. Professor Umbridge manages to catch them while they were busy with a meeting and Harry is then taken up to Albus Dumbledore’s office where Cornelius Fudge is waiting for them. Albus Dumbledore decides to take full blame for the society, Professor Umbridge steps take over Dumbledore’s position as Headmaster as he is forced to step down. Harry got a vision of his Godfather Sirius that was being held and tortured by Voldemort in the Department of Mysteries while he was busy with one of his fifth year exams(O.W.L. exam). Harry and his friends then decided to break into Professor Umbridge’s office to use her unpoliced fireplace to transport to number twelve Grimmauld Place, unlucky for Harry because they only fould Kreacher the house elf who told them that Harry’s Godfather was taken the Ministry of Magic. In the Forbidden Forest where Harry and Hermione Granger lured Professor Umbridge, she got carried away by Centaurs. Harry then travelled to the Ministry of Magic with Hermione Granger and a few of his friends just to realize that Lord Voldemort has been tricking him about the whereabouts of his Godfather.Albus Dumbledore and Lord Voldemort have a dual where Lord Voldemort attempts to possess Harry so that Albus Dumbledore can kill him, but didn’t get it right. Lord Voldemort then escapes as Cornelius Fudge and other ministry representatives arrives. Cornelius Fudge admits he was wrong into thinking that Lord Voldemort didn’t and reinstates Albus Dumbledore as headmaster.When Albus Dumbledore and Harry returned to Hogwarts, Dumbledore started to explain many things to Harry. Dumbledore explains that the prophecy had sad that a boy would be born in July with the ability to defeat Lord Voldemort and that neither could live while the other survived. Dumbledore tells Harry to go back to his Aunt and Uncle’s house this summer, because as long as he is there his Aunt is safe. He also says to Harry that when his mother died, she protected him with her love. Harry then returned to his Aunt and Uncle’s house.

At Harry's aunt and uncle Petunia and Vernon Dursley's house away from. (2019, Aug 20). Retrieved from https://studymoose.com/at-harrys-aunt-and-uncle-petunia-and-vernon-dursleys-house-away-from-essay 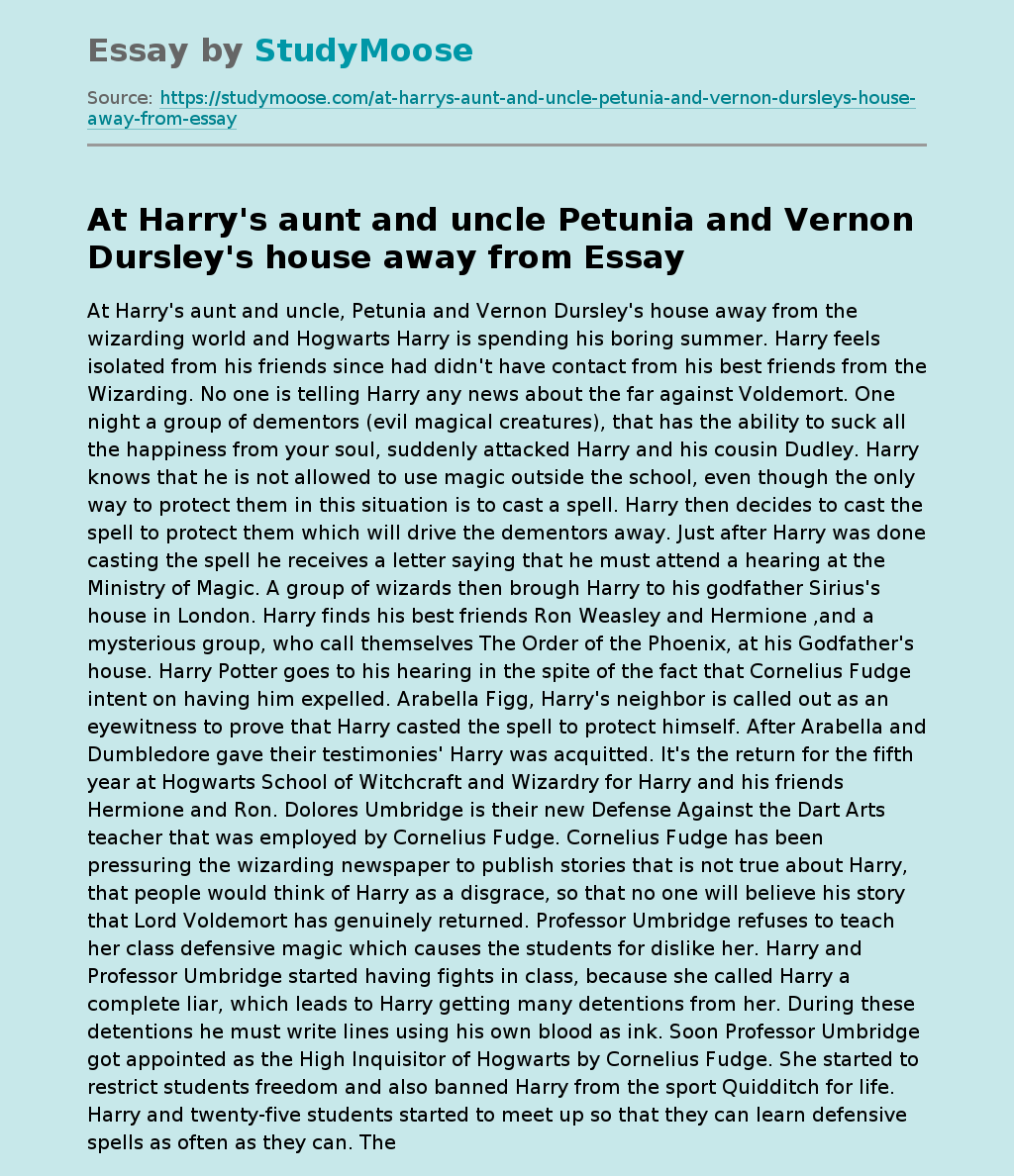