Critically evaluate the resource-based view (RBV) of the firm as a means of explaining the sources and strength of the competitive advantage of Apple.

Apple is an American multinational corporation which designs, manufactures and markets a range of consumer electronics and software products (Apple Inc., 2008). At the end of last fiscal year, Apple’s worldwide annual sales amounted to $32.5 billion, an increase of 35% from 2007 (Apple Inc., 2008). Not surprisingly then, was Apple voted America’s most admired company, also topping the global survey (Fortune, 2008).

Don't use plagiarized sources. Get your custom essay on
“ Apple’s Competitive Advantage ”
Get custom paper
NEW! smart matching with writer

This kind of achievement speaks volumes. Using the “resource-based view” (RBV) of a firm, we can begin to understand how Apple is able to create and sustain this competitive advantage.

The “resource-based view” (RBV) looks at a firm’s internal strengths in terms of the resources and capabilities it possesses as a means of creating a competitive advantage (Barney, 1991; Wernerfelt, 1984). Contrary to environmental models such as Porter’s (1985) classic five forces model, the RBV assumes that external opportunities and threats are essentially the same for every firm but that the resources they possess differ (Collis, 1991).

The concept draws from Penrose’s (1959) work, who introduced the idea that a firm is a unique “collection of productive resources”.

The argument is that by formulating a strategy on the basis of these unique resources, a firm is presented with new opportunities that lead to higher returns over longer periods of time (Wernerfelt, 1984). Two basic assumptions underpin the RBV. A firm’s resources and capabilities must be heterogeneous and they must be imperfectly mobile in order to create a sustainable competitive advantage (Barney, 1991; Peteraf, 1993).

Apple’s value creation is based on a differentiation strategy. This differentiation is underpinned by its unrivalled ability for innovation. Notably, Apple has been ranked as the word’s most innovative company for the third year running (BusinessWeek, 2007). This uniqueness has reduced consumer’s price sensitivity and enabled Apple to command premium prices (Porter, 1985) even when faced with highly aggressive price competition (Apple Inc., 2008). By continuously developing and offering new innovative products and solutions that undermine current technologies, Apple has been able to create first mover advantages in each of its markets. In doing so, Apple has created mobility barriers which inhibit competitors from implementing the same strategy (Barney, 1991). The fact that competitors are unable to attain a first mover advantage themselves suggests that they do not possess the same strategically relevant resources and that Apple’s resources are therefore heterogeneously spread and imperfectly mobile, which in turn confirms their competitive advantage.

In many respects Apple’s ability to innovate is at the forefront of its competitive advantage but viewed from the RBV perspective, this innovation may be seen to derive from other internal activities and processes through which Apple deploys its resources and competencies to achieve its competitive advantage (Johnson et al., 2004; see Appendix A for a list of Apple’s resources and competences). Firm resources include “all assets, capabilities, organisational processes, firm attributes, information, knowledge etc; that enable a firm to conceive of and implement strategies” (Daft, 1983 cited Barney, 1991). Johnson et al (2004) differentiate between tangible (e.g. offices and retail stores, factories, capital etc) and intangible resources (e.g. knowledge, reputation, management etc).

Barney (1991) lists four criteria which a firm resource must have to hold the potential of SCA: value, rareness, imperfect imitability, and substitutability (see Figure 1).

If a firm’s resources are both valuable and rare, a firm may achieve a competitive advantage (Newbert, 2008). A resource is considered valuable when it improves the efficiency and effectiveness of a strategy, and when it exploits external opportunities or neutralises external threats (Barney, 1991). This wording is somewhat confusing as it draws a direct connection with the environmental model, i.e. Porter’s (1985) five forces. The ‘value’ variable could therefore be rendered exogenous to the RBV (Priem and Butler, 2001). On the other hand, Peteraf (1993) praises the model for its internal focus and ability to uncover potential sources of competitive advantage which cannot be attributed to the external environment, notably because areas of value are often so difficult to identify (Newbert, 2008). The term ‘potential’ is used because not all resources have the ability to create a SCA (Barney, 1991); in fact most resources and capabilities are unproductive in isolation.

Their full potential value is realised when they are combined and deployed via other capabilities (or resources) as seen with the following example (Newbert, 2008; Ketchen, 2007; Barney, 1991; Penrose, 1959): Steve Jobs; the CEO and co-founder of Apple, is undoubtedly one of the most valuable resources of the company. However, his value not only lies in his ability to “keep churning out best-selling wonders” like the iPod (Economist, 2005) but also in creating a corporate culture that fosters individuality and excellence. This in turn has drawn talented people into the company (Apple Inc., 2008) which has consequently encouraged superior knowledge and know-how within the company. Apple has recognised the benefits associated with combining resources which is why all functions from design to engineering have been moved in-house (BusinessWeek, 2005). As a result, Apple’s resources and capabilities have become more vertically integrated and are therefore more efficient and effective than any of its rivals.

Rareness, by definition, is a resource which is not widely available. Hoopes et al (2003) argue that rareness is unnecessary. Although the concept is prominent in the original works by Wernerfelt (1984) and Barney (1991), they believe that any resource which meets the other criteria (i.e. valuable, inimitable and non-substitutability) will inherently be rare. Newbert (2008) disagrees and determined that rareness is indeed a variable related to competitive advantage; however it is noted that firms do not necessarily have to possess both rare resources and rare competences to achieve this.

For example, the raw materials that Apple uses to manufacture its products are widely available, yet the process in which they are manipulated and assembled to create the final product is protected by patent; it is therefore the resulting resource-competence combination that is rare. The rarer and more valuable this combination, the greater the competitive advantage.

Priem and Butler (2001) add that value and rareness are each necessary but not sufficient conditions to sustain a competitive advantage. For a competitive advantage to be sustainable, a firm’s resources must also be inimitable and non-substitutable (Newbert, 2008). A resource is imperfectly imitable when another firm cannot duplicate it perfectly and it cannot be obtained (Peteraf, 1993; Barney, 1991). Apple’s extensive coverage of patents falls under this category. Patents pose a concrete entry barrier to competitors wanting to duplicate Apple’s strategy and as such, render this aspect of its competitive advantage sustainable.

As mentioned in the introduction, Apple has become almost synonymous with innovation and this is reflected in its reputation which is also imperfectly imitable. As well as being socially complex it has been shaped through its unique events in history such as the launch of the first Macintosh in 1984 or the iPod in 2001 (Barney, 1991). Leading on from this, is the Apple brand itself. This is one of the most valuable resources of the company and has been essential in the firm’s ability to successfully leverage its strategic competences into diverse new markets (personal computers (Macintosh), digital media (iPod, iTunes) and mobile communications (iPhone) (Apple Inc., 2008)).

Although a competitor may not imitate a resource or competence, it might be able to substitute it with a strategically equivalent resource (Barney, 1991). As Priem and Butler (2001) noted, there are many different approaches and resource configurations that can achieve a particular level of return. Therefore a firm’s competitive position can still be threatened as substitute resources may reduce the potential for rent earnings by making the demand curve more elastic (Peteraf, 1993). Once a resource or capability has been identified as having the potential for creating SCA, its heterogeneity must be preserved (Peteraf, 1993). This implies continual investment in the conditions that make up the competitive advantage in order to protect such a position (Wernerfelt, 1984). A fitting analogy by Wernerfelt (1984) is “a high tree in a low forest; since it will grow faster and stay taller”. By maximising the rent on resource-based strategies, other firms trying to replicate them will find that there is little to be had once the resource depreciates (Grant, 1991).

It would be more logical to view resource-based and environmental models of competitive advantage as two sides of the same coin. The ideas that flow from both should be integrated for the RBV to fulfill its potential as a strategic management tool. Nevertheless, considering the extremely high level of competition in its markets, it does appear that Apple has been able to use its internal strengths to exploit external opportunities and neutralise external threats. For that reason it is fair to say that the RBV does go a long way to explain the strengths Apple’s competitive advantage.

BusinessWeek, 2005. Commentary: Apple’s Blueprint for Genius. Handling its own design work is one reason for best-sellers like the iPod and Shuffle. Steve Jobs is the other. USA: The McGraw-Hill Companies Inc. Available from: http://www.businessweek.com/magazine/content/05_12/b3925608.htm [Accessed 14 November 2008]

Hoopes, D.G., Madsen, T.L. and Walker, G., 2003. Guest Editors’ Introduction to the Special Issue: Why is there a Resource-Based View? Toward a Theory of Competitive Heterogeneity. Strategic Management Journal, 24 (10), 889-902. 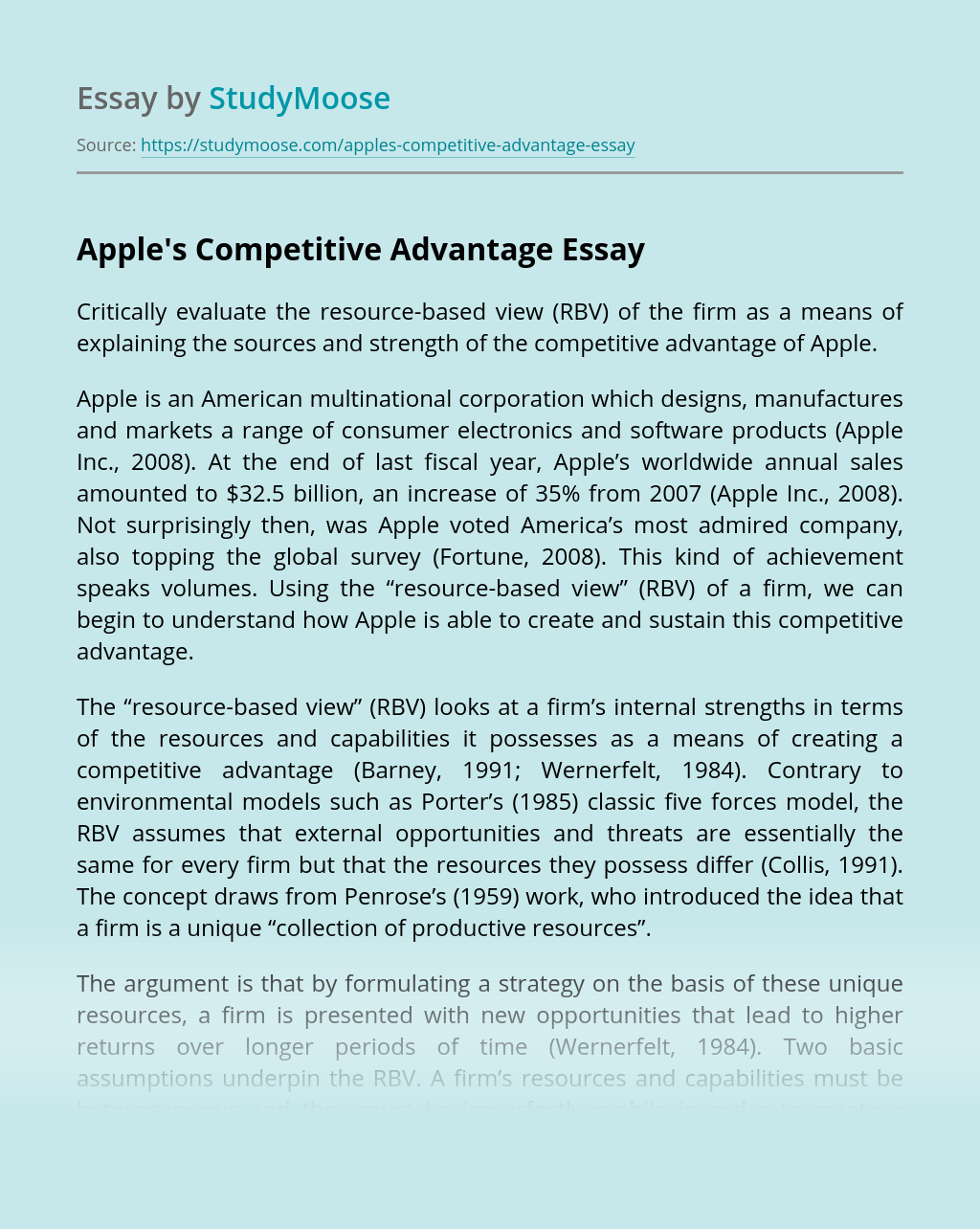