Andok’s Lechon Manok is one of the longest and most popular roast chicken in our country. This company was started by the so called father of “Litson Manok,” Leonardo “Sandy” Javier Jr. twenty years ago. He said that he encountered numerous disappointments and struggles in sustaining their business especially when they have a lot of competitors like Baliwag but he did not give up. He made his business his passion and was very determined to be successful. When he was still starting, he did not have the capital to start a business.

He was forced to borrow twelve chickens from his mother’s friend. Unfortunately, he only sold two chickens. His struggles in life inspired him to strive harder and to be a better entrepreneur. He experimented with the different ingredients to capture what we know today as the trademark Andok’s taste. Before, he started with twelve chickens until it boosted its daily inventory to eighty chickens. His business started evolving because he said that he loves what he is doing and he believes so much in his business.

Up to date, Javier continues to grow Andok’s with its menu expanding to include liempo, pork chop, sinigang, etc. Andok’s also opened its doors to franchising. Because of their efficient and systematic franchise support, an “AA” standard for Good Manufacturing Practices (GMP) has been obtained by their Metro Manila commissary and nominated “AAA” standard GMP for Iloilo commissary.

For the consumer’s better access, Andok’s were strategically located in places where it is visible and accessible from major thoroughfares; passenger terminals of public utility vehicles; community centers or malls; near markets; commercial/ business district; and areas with high foot and vehicle traffic.

To maintain the quality of the food being served, all stocks and ingredients will be supplied from the Andok’s production facility pre-portioned, marinated and ready-to-cook. Take-out franchise stores will be equipped with the standard rotisserie machine with hood and stainless steel chimney, stove, siopao steamer, cooking table, Dokito fryer, chiller boxes, freezers and other equipment.

Here is the list of awards garnered by Andok’s through the years of service:

Although a roasted chicken business meets a number of rivals in the market, Andok’s has made its stand to be one of the most successful brand of litson manok in the country. Despite having a lot of competitors, they try to innovate their products, add different products, and at the same time expand their company. They were able to overcome the struggles that they faced and be successful in their business. 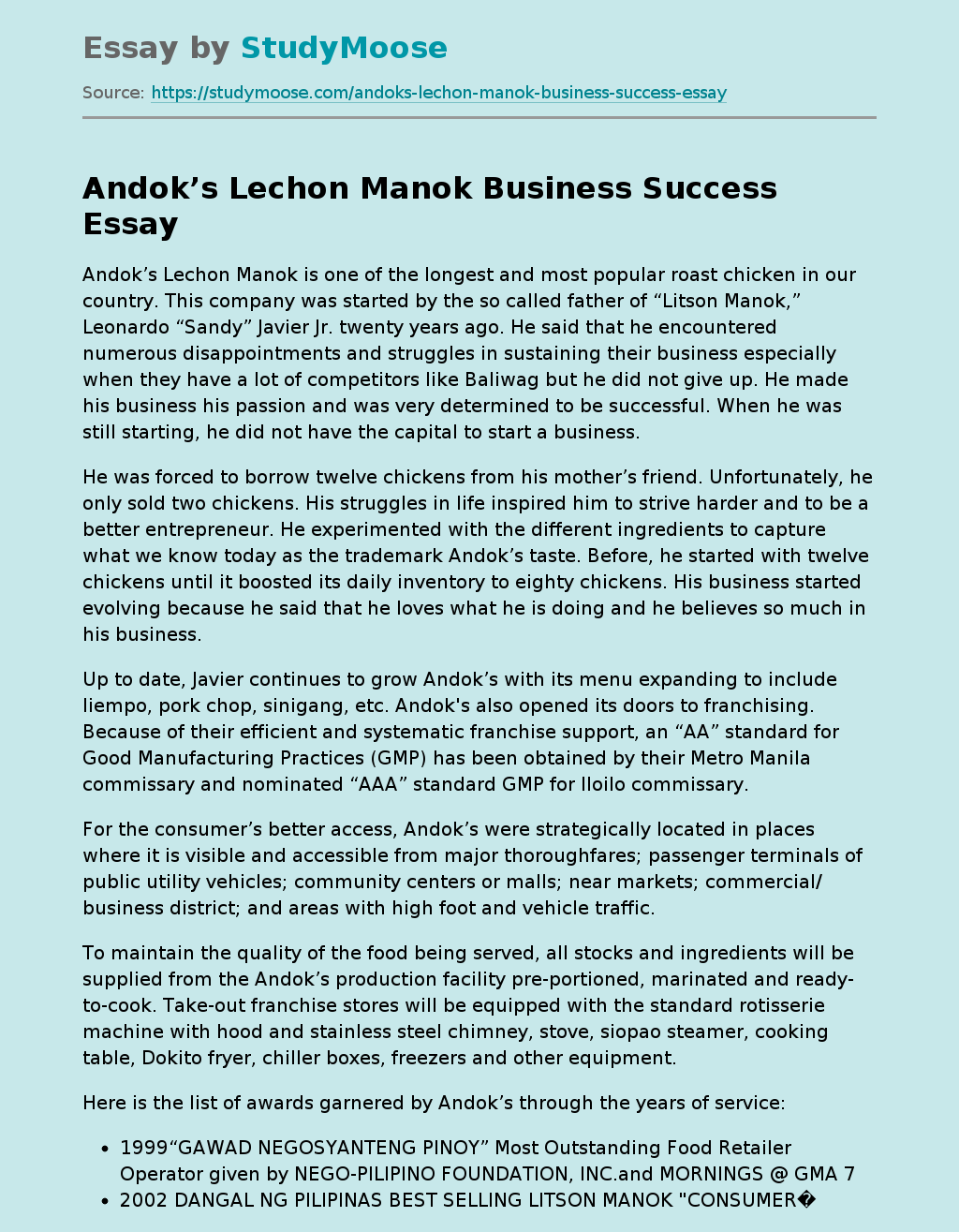