Analysis Of The Scarlet Letter

In The Scarlet Letter, Nathanial Hawthorne made it quite evident that Pearl was a very symbolic character. As we know, following Hester’s act of adultery, she became pregnant with Pearl and we get the sense that there is something strange and unnatural about her when fist introduced. This is relevant to her symbolism and the many attributes that she represents. Throughout the novel, her symbolism ranges from being equated to evil, sin, and innocence. Furthermore, it is also possible that her name in itself is used to symbolize different elements like a pearl; a treasure much like Pearl becomes for Hester.

Don't use plagiarized sources. Get your custom essay on
“ Analysis Of The Scarlet Letter ”
Get custom paper
NEW! smart matching with writer

In many ways, it seems that Pearl symbolizes evil and the actual letter which is also is a representation of evil; she represented God’s punishment by her mocking and nagging of Hester. “The symbolic quality of the letter is transferred to Pearl in which reinforces the idea that the symbol combines the reference to an abstract idea with a material existence.

” (Carrez) Although Hester loves Pearl, Pearl is a curse, the living personification of the scarlet letter, and is as much of a tormenting entity as the symbol upon her breast which also represents evil and sin in the novel. Due to Hester’s and Dimmesdale’s sins, their result is Pearl who serves as a constant reminder to Hester of her sin. This is made evident in one instance where Hester removes the letter in the forest and Pearl throws a tantrum and refuses to listen to her because Pearl is not comfortable with the fact that the scarlet letter wasn’t there.

Furthermore, in many cases Hawthorne deliberately emphasizes her symbolism of the Scarlet “A” to the reader. While Hester dresses in a dull fashion, she uses her talents as a skilled seamstress and designs and sews intricate, beautiful clothing for Pearl; almost as intricate as the scarlet “A” Hester bears on her chest. Because of this, both the scarlet “A” on her breast and at her child will receive much attention from the townspeople. One example of this is noted in a passage where Pearl and Hester go to the Governor’s house and Pearl is dressed in a scarlet dress with gold edging resembling the “A” on Hester. In essence, Pearl really was the scarlet letter because if she wasn’t born, Hester would have never been found guilty of adultery, and thus never would have had to wear the scarlet letter. Although Pearl had been mischievous and not very caring and often symbolized evil and sin; when her father, Arthur, finally admits he is Pearl’s father and is dying, Pearl changes. This breaks her free from being associated to the immoral symbolism.

Pearl symbolically being equated to the scarlet letter is not the only symbolic meaning that she has; she is also the symbol of innocence. Pearl was often treated with disdain for no reason; meanwhile her only “crime” was her birth and existence. Furthermore, the children in The Scarlet Letter have a cruel nature; they know the significance of the scarlet letter, but in many cases, do not fully identify what it’s associated with. The children observe that the adults treat Hester with disdain and with attempts to imitate the adults; they sometimes harass and tease Pearl which further emphasizes her innocence and how she is sometimes a victim because of it. Also, Pearl has a strange attachment to the scarlet letter. When she was a baby, she would reach out to her mother’s breast and try to grab the letter. She seems to instinctively realize that it has great significance, but when she confronts Hester about it because of her innocent curiosity, her mother lies to her, telling Pearl that she wears it because of its beautiful gold thread. Along with the idea of being the symbol of innocence; her name represents a treasure and great worth.

Through Pearl being brought to life, is cost Hester a great deal; it was the price of her mother’s public condemnation, but regardless of what it cost Hester, Pearl was also of great worth much like a real pearl. Consider an actual pear. For a pearl to develop, it starts as a piece of sand, which is grainy and rough; similar to how hard and rough it was for Hester to originally cope with the burden of the scarlet letter which is in essence Pearl. Then, after time that sand gets coated and becomes a pearl; a treasure much like Pearl becomes for Hester. This is also suggested in the text of the novel where Hawthorne writes, “but she named the infant ‘Pearl,’ as being of great price,–purchased with all she had,–her mother’s only treasure!” (Hawthorne 61) In addition it is important to consider that the idea of a pearl having a vivid beauty to it and would not belong in Puritan society because it would contrast with society’s strict and rigid ideals. Pearl nonetheless stands out as beautiful and charming (like a pearl) in a society consisting of a populace of stern and dull people. She also gave Hester reason to live and press on with her life despite the hard times because regardless of what it cost Hester, she is at the same time Hester’s source of happiness. In the same way that her mother Hester was different from Puritan society, her child also was not a normal Puritan. Pearl is different, but it’s her difference that gives her great worth and beauty; she is her mother’s only treasure and companion.

The ambiguity of the symbolism of Pearl within Hawthorne’s The Scarlet Letter is extremely evident for all of his readers. Hawthorne gives the reader a chance to consider their own opinion on what Pearl really stands for. His ambiguity shows the true complexity to Pearl and each of her symbolic meanings. This is clear in how many symbolic meanings Pearl had. In the novel, Pearl is an excellent example of childish innocence and treasure, evil and sin, and morality. Her willpower and imagination make her a blessing and a curse to her mother, who has paid such a great price for her child. Hawthorne’s ambiguity shows the true complexity of Pearl and each of her symbolic meanings that were covered and arrange it all quite brilliantly because Hawthorne incorporated the aftermaths of Hester and Dimmesdale’s sins into one innocent character, Pearl.

Analysis Of The Scarlet Letter. (2019, Aug 19). Retrieved from https://studymoose.com/analysis-of-the-scarlet-letter-essay 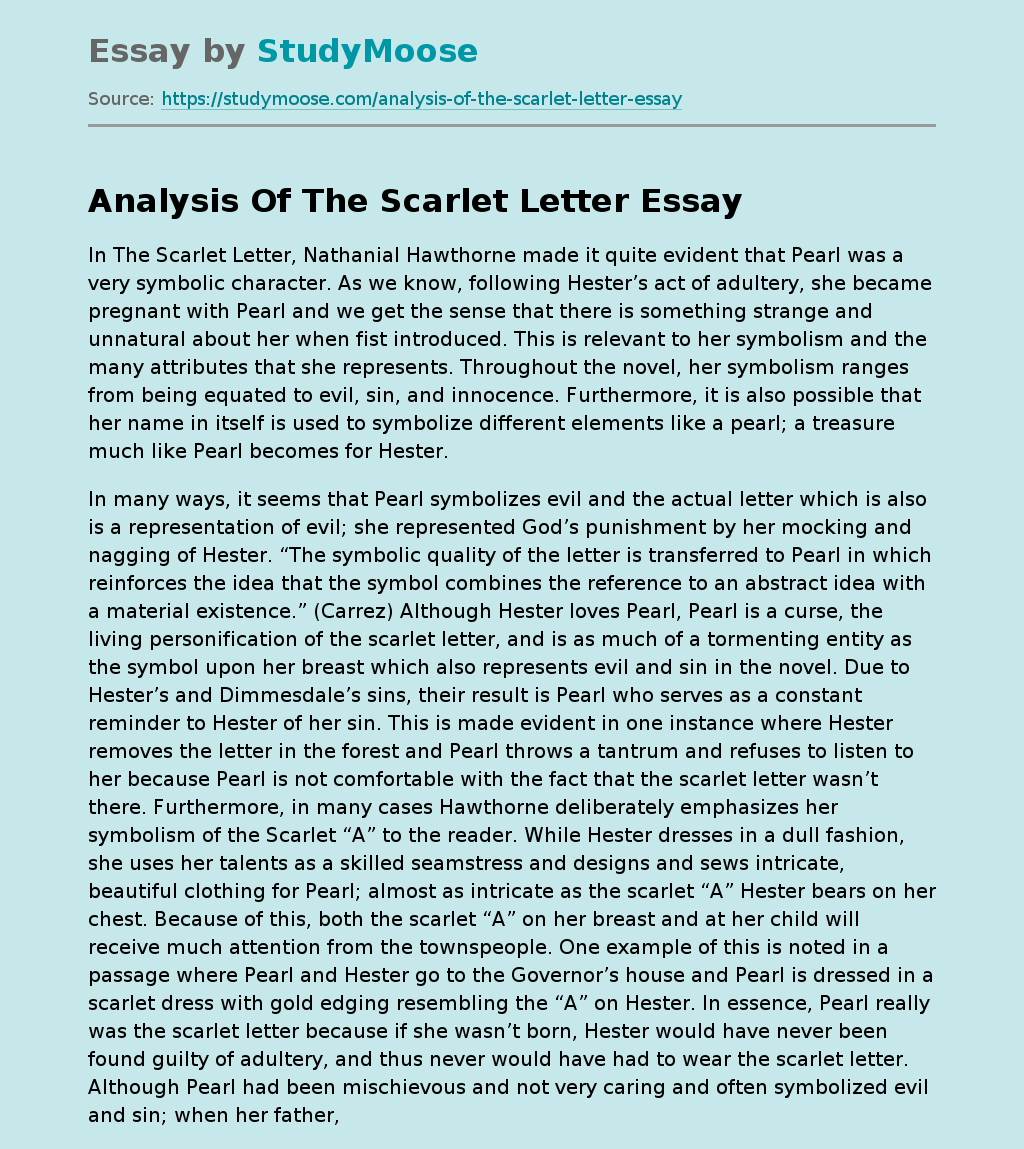