Citizen Kane flat out the most important greatest American film as far as I am concerned. It is a quarry for filmmakers in that, it contains the very best of cinematography, editing, lighting and the story itself is somewhat complex but it is simple. It is based on the old biblical idea what shall it profit a man to gain the whole world if he loses his own soul

One of the cinematography techniques play a significant contribution in Citizen Kane is deep focus which refers to having everything in a scene is in focus at once, not just foreground or the background.

Don't use plagiarized sources. Get your custom essay on
“ Analysis of Film “Citizen Kane” ”
Get custom paper
NEW! smart matching with writer

The technique does require cinematographer to figure out how lighting, composition and type of camera lens work together in order to archive the desired effect. According to Sarcasmjew,

Audience often notice directors use shallow depth of field to highlight individualism or greatness qualities behind the character. Orson Welles believed the soft focus not only offers a little representation of character, but also makes them artificial, he considered visuals help the audience understand the conflict behind the character that is being focused.

Here is an example of Welles’s use of deep focus cinematography taken from the scene where young Kane is playing in the snow then pulls back into the room keeping the boy in clear view while his future is being discussed by his parents and his guardian. In most movie, the main elements will be the focal point of the scene; however, by applying the deep focus technique, every character and every item in the scene is in perfect focus throughout one.

With using deep focus, the director can display overlapping actions, and mise-en-scene becomes more critical. The term mise-en-scene is referred to “signify the director’s control over what appears in the film frame” and when everything in the composition is in focus, the director must give a lot more thought in such elements as setting, lighting, costume and the movement and actions of figures appearing within the film to direct the audience’s attention (1). To illustrate, now we can look back the scene where we see Kane through a window pane playing with snowballs, the camera is pulling back and keep Kane in the center between the conversation his mother and the guardian. Then, within the same angle, the camera is keeping pull back and eventually stops on the other side of a dining table.

From the final framing, we can see that the mother is kept from center to the closest to the camera, the guardian is in the middle because he has influence on her and the father is not an influence so he is furthest away from the conversation, and especially the boy is still visible at the background. Consequence, the movement of the characters or those compositions on stage and camera movement guide the eyes and the attention of the audience. In result, Charles Kane becomes the subject of the conversation both visually and literally. An effectively forming the mise-en-scene within deep focus actively create the whole space of the scene without leaving the viewer confused.

One more example describe the technique from the movie is the scene when Susan Alexander Kane attempts suicide. We clearly see Charles Kane and the drug container deeply focus even though he is staying behind. The use of the deep focus creates a connection between them. Based on this explanation, we could say that Susan Alexander did not attempt to commit suicide but was indicatively assisted by Kane in her attempted suicide. On the other hand, Susan Alexander is casted in the shadow which represents the result in relation to the drugs and Kane. (https://sarcasmjew.wordpress.com/2012/07/19/citizen-kane-and-the-deep-focus-shot/).

The lighting style in Citizen Kane is clearly chiaroscuro and also the visual style of film noir (Goodman 2017). According to Pooky,

The term chiaroscuro is from Italian Renaissance painting to describe the dramatic effect of contrasting areas of light and dark. It is often used in paintings, graphic novels and photography, while film noir and neo-noir make use of chiaroscuro to create striking, hyper-real visuals. And film noir has a defined style that shadow-filled and low-key lighting. Night ruled in film noir, the shadow is more important than the light. (2016)

Throughout the movie Citizen Kane, Orson Welles used strong shadow and dynamic gradients as a fundamental to achieve meaning and atmosphere, he used lighting to bring the viewer with desired emotions. A great example to prove the meaning of lighting is at the beginning of the movie. In the dark newsroom, the scene of many reporters those are discussing about Kane’s last word after watching a news reel. The director chose to use two strong backlights come from small windows on the far wall of the room in order to cast shadow to all these characters to specifically tell the audience not to focus on these reporters (Alton 112). In fact, we can only see their silhouettes and the outline of the hands moving.

Furthermore, according to Lelandrc, lighting in Citizen Kane is used dynamically. To illustrate, the scene of Kane and Susan Alexander are arguing about her singing career, when Kane walks to Susan Alexander, he is blocking light hitting her face and casting her into shadow. With the change of light in Susan’s face, we can figure out the dominance of Kane’s characrer.

Another scene in the movie that demonstrate the use of lighting where his wife performs terribly in the opera. In the scene, when Kane stands up and strongly claps his hands, he is covered by the shadow, we only see his silhouettes. The use of shadow is very symbolic, it tells the viewers that he is alone in the situation.

Orsen Welles uses lighting throughout the film as powerful tool to indicate ideas and moods of the movie. The use of lighting in this film is consider as a significant reason why Citizen Kane to be known as the most influential films of all time.

Perhaps another effective feature which contribute to the term ‘the most influential films of all time’ is sound. It adds power to action or creating an illusion to bring the characters emotional to the audience. According to Goodman, Orson Welles made name for himself in radio with the infamous ‘War of the Worlds radio broadcast’, so he certainly had an ear for audio innovation. Welles was specifically interested in musical scenes, because he was concern about defining the sequences differently like it has never done before. For example, during Susan Alexander’s opera debut, the curtain rises and Susan Alexander sings a soprano, the Salammbo’s Aria, and she continues over the entire action. However, the trick part is at the end that she ends her singing after the curtain falls. Whatever music or sound Welles chose for Citizen Kane, he wanted them to be as visible as original, rare, and identifiable.

Moreover, sound is also used to express the emotional situations of a character in the actions. For example, after Susan Alexander leaves Kane, he destroys her room, and the viewer can see a parrot flapping its wings and screeching as if the voice of screaming Kane with wounded heart. Also, the other example is in during the Kane picnic. When both character are arguing in the tent, Kane suddenly slaps Susan. At the same time, the viewer can hear the screaming voice of a women from background as if substitute of Susan’s inner voice. It is sometimes possible to hear a whispering soundtrack to explain or to express the emotion or the inner voices of characters. Like, when Susan attempts suicide because of suffering as humiliated opera singer, the viewer can hear a pale soundtrack that indicates the humiliated feelings of Susan Alexander.

Last but not least, Citizen Kane employs creative storytelling techniques as well. Acting almost as a biopic (biographical film), Citizen Kane portrays a long period of time realistically, allowing the characters to age as the story goes on. Instead of being told in a linear, completely chronological manner, Kane’s story unfolds in overlapping segments that add more information as each narrator adds his or her story. Telling Kane’s life story entirely in flashbacks was another innovative approach to storytelling. Flashbacks had been used in earlier films, but Citizen Kane used them most effectively. The flashbacks are given from the perspectives of characters who are aging or forgetful, which casts doubt on the memories being discussed. In other words, these are unreliable narrators whose own opinions and interpretations affect their accuracy. The storytelling techniques succeed in painting Charles Foster Kane as an enigma, a tortured, complicated man who, in the end, leaves viewers with more questions than answers and inevitably invokes sympathy rather than contempt.

Although seeing this film now, it looks relatively modern it does not look all that unusual This was fairy avant-garde for its time there are a lot of low shots where the camera is basically on the floor looking up and you see actually ceilings in this film which was unusual back in 1941 when this film came out. 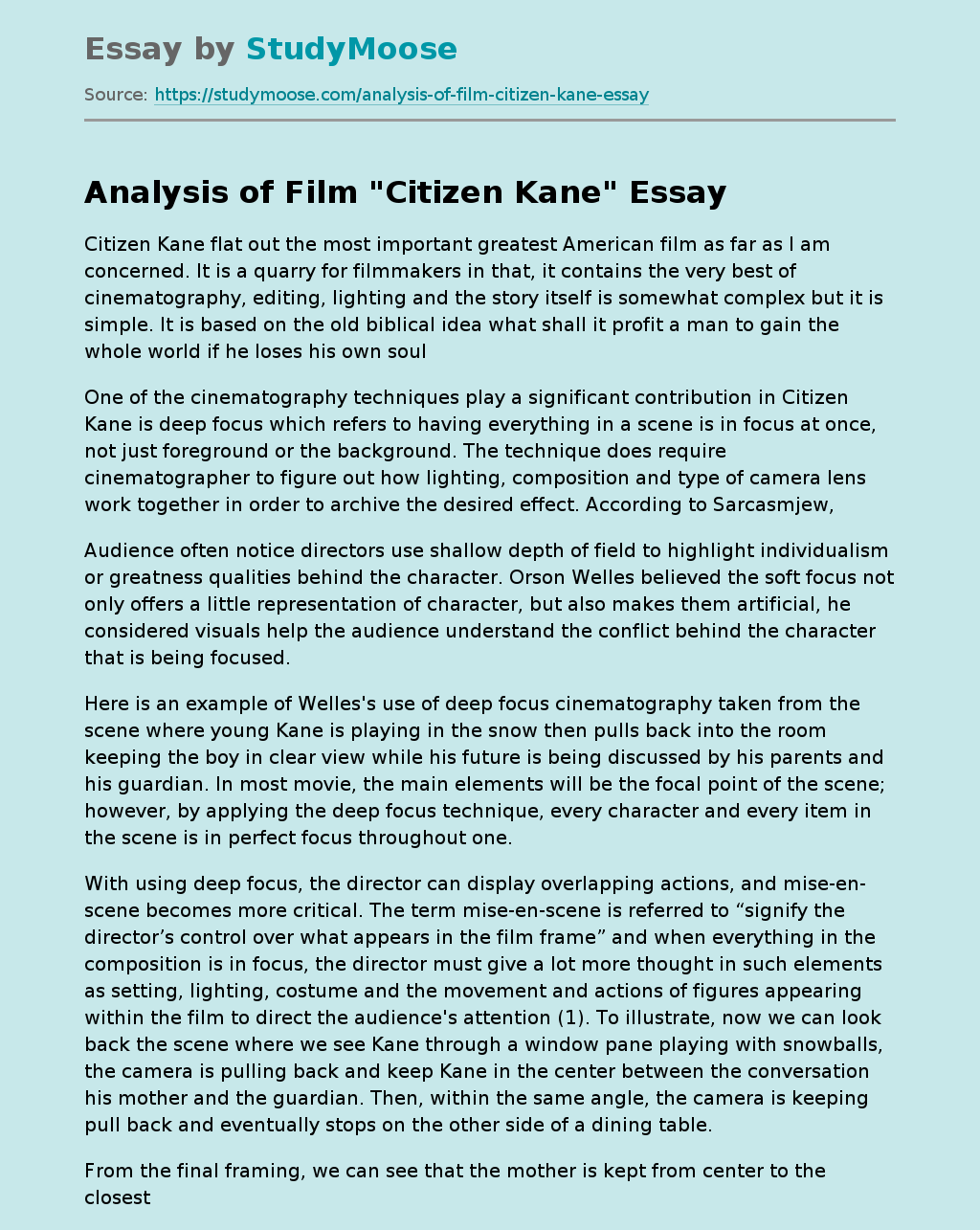