There are so many stories about Amelia Earhart’s death but, there are three common beliefs. Which one is true? That’s the question on everyone’s mind. One idea is that the plane crashed into the ocean and then Amelia Earhart and her navigator, Fred Noonan, died right then and there. Another idea is that they died as castaways on the island of Nikumaroro. The final theory is the Marshall Island Conspiracy which states that they were taken hostage by the Japanese.

Don't use plagiarized sources. Get your custom essay on
“ Amelia Earhart Theories ”
Get custom paper
NEW! smart matching with writer

Out of the multiple theories of Amelia Earhart’s death the theory of Nikumaroro Castaway is the most believable.

Amelia Earhart was a women who wanted to achieve great things which is what she did. She is known for lots achievements but she is also known for the huge flight that she never was able to complete. One of her greatest accomplishments was when she was able to fly solo across the Atlantic Ocean. In 1937, Amelia Earhart was not able to complete the task of flying across the world at its equator.

Amelia and Fred could not get to the island Howland. Therefore, the plane along with Amelia and Fred disappeared. Nobody knows for sure what happened to them. But, the Nikumaroro Castaway theory stands out for being the right one.

Amelia was born in 1897, July 24th in Kansas. During World War 1 she volunteered to be a nurse’s aid and she visited an airfield. It was then that she decided that she wanted to be a pilot.

She didn’t just want to be a pilot, she dreamed of being a pilot. It only took her one joy ride in a plane to decide to take flying lessons. She was given a two and a half hour lesson and she bought a plane not so long after. But, Amelia’s life wasn’t so perfect and fantastic as it sounds. There was trouble at home because her parents divorced and during this time it was very uncommon. That didn’t put Amelia down because she continued to do the best work she could. (Amelia Earhart)

Amelia was able to have her first solo ride in 1922. Soon after she set an altitude record of 14,000 feet. The records didn’t stop there because she later set a record for being the first woman to fly over the ocean. After that accomplishment people started noticing her. Amelia was hired to write in a magazine and to endorse commercial products. She even set a record by flying a plane to visit her father. This was done because he lived across the country so she was the first woman to fly solo across the country there and back. In 1930 Amelia was also responsible for setting a new women’s speed recorded in the Women’s Air Derby. There are many more accomplishments Amelia made because she was motivated.

The theory that her plane crashed in the ocean could be true but it is not likely. This idea states that the plane was running very low on fuel. Therefore, they were not able to find the island Howland in time so the plane crashed into the ocean. This is a very simple idea that doesn’t have any way to back it up. In around 2002, Nauticos which is a hangover company in Maryland decided to lead a deep sea search to locate the plane. A hangover company is a company that provides deep-ocean searches and also provides ocean-research help. David Jourdan who is the president of the company explained that the company did a bunch of studying and research to determine what part of the ocean the plane would be in now if the plane had actually crashed. The company was able to take into consideration the facts that they have about the fuel supply and they could use the radio transmissions. A spot in the ocean was picked and they thought the plane would certainly be there. Jourdan stated, ‘We are confident it is in the area we are searching.  Was their researching and all their work enough? The answer is no.

The actual search happened during the year 2002 over a total of two months. A total of 630 miles was searched on the ocean floor due to all of the technology that was available. This spot was picked carefully and was searched thoroughly but there was no plane found. Then they had a follow up mission in 2006 because they thought they could find it another time but they came up empty handed once again. But, those two failed attempts didn’t discourage others from searching the sea floor.

The third search was a team which was organized by the Waitt Institute for Discovery. This group searched the west side ocean floor of Howland. The area they searched was about the size of Delaware. The third time wasn’t the charm because once again they came back with no clues and no plane. Thousands of miles were searched and there was no trace of a plane that was Amelia Earhart’s. This proves that Amelia Earhart was most likely not killed by the plane crashing in the ocean. This theory is off the table which only leaves the theory that the Japanese captured them or the theory of the Nikumaroro Castaway.

Another theory that is not highly supported is the Marshall Islands Conspiracy. This conspiracy states that Amelia and Fred couldn’t find the island Howland or they did not want to go. It was told that they went North instead of going to Howland and were taken hostage by the Japanese. ‘If she couldn’t find Howland, Plan B was to cut off communications and head for the Marshall Islands and ditch her airplane there, (Top 3 Theories)’ Rollin C. Reineck stated. The reason why they were taken hostage is because they were seen as U.S. spies. When they were captured by the Japanese they could have been killed or they somehow returned back to the U.S. This idea doesn’t make sense because if the Japanese believed that Amelia Earhart and Fred Noonan were spies and they would not be able to get back home. But, the theory states that they did get back to the U.S. and changed their names. Amelia Earhart changed her name to Irene Craigmile in New Jersey during 198 so they were not recognized by the public. What doesn’t make sense about this is that citizens would have recognized her. So many people looked up to her for all of her achievements why wouldn’t they recognize her now? A name change won’t change someones appearance. (Top 3 Theories)

The Marshall Islands Conspiracy could be a realistic option but the facts don’t work together. The idea states that Amelia and Fred got away from being captured and got back to the U.S. Yet, there was no explanation given about how they were able to do that. Another idea that makes no sense is that when they were back in the U.S. they changed their names and nobody recognized her. Amelia became very well known and was friends with other well known people. So, all of this just doesn’t add up.

Now here is the theory that is the most believable. The Nikumaroro Castaway has a lot of evidence to help support this theory. This theory states that the plane did not land on the island on Howland because they could not find it. Instead they landed southwest of Howland on a small island named Nikumaroro. Multiple searches went on, on the island to find any evidence that showed that Amelia Earhart actually did land there. In the 1940s bones were found on the island.

The bones were thought to be Amelia Earhart’s so they were investigated by a physician. The physician looked over and analyzed the bones but came to the conclusion that they were male bones. At one point, the bones went missing. The bones were never found but the measurements of the bones were still available. Doctor Jantz looked over the past notes that Hoodless wrote and checked over his work. Jantz did not agree with everything he saw. He as well as the TIGHAR team used other evidence they had to help them. They were able to use pictures of Amelia with bare limbs shown so they could get a better idea how long an arm or a leg was. After all of the research they were able to tell that the bones represented a women and not a man like they first thought. The bone measurements were able to determine the height and sex of the person.

Even though the bones were great evidence showing that they were Amelia Earhart’s there were even more artifacts found on the island. There was a size nine shoe which is also the same size Amelia wore. A tool named the sextant was found. This is an instrument with a 60 degree arc that measures the angle between objects and it is used for measuring altitudes in navigation. Amelia’s copilot would have used that tool. All of this evidence proves that Amelia Earhart died on this island. Jantz once stated, “We think there is pretty strong evidence that somebody of European origin was on the island and these artifacts have to be explained. If it wasn’t Amelia Earhart, who was it? (Castaway Doubts)”

Now it should be very clear why the Nikumaroro Castaway idea is the most proven and believable. Amelia Earhart did not crash and die in the ocean because there is no evidence and she did not get captured by the Japanese and return to the US because it doesn’t match up. Yes, it is true that she landed on the island of Nikumaroro and died there. Amelia Earhart was a very smart and successful person which means she would have found a way to survive at least for a little bit. Because of Amelia, many women were inspired by her. She had a beautiful speech talking about women in the science field. “When the history of our time is written, it must record as supremely significant the physical, psychic and social changes women have undergone in these exciting decades, (Earhart. Amelia Mary)” Amelia Earhart proudly stated.

Without her determination and devotion to science women might not have been as curious and welcomed to the science field. She helped improve what was known about science and she is still inspiring people today. Because she was respectful people also respected her. Her crew respected her as well as other famous people and normal citizens. On a personal note Samuel Friscia the great grandfather to the author of this paper served on her personal ground crew. He only had positive things to say about her.

The mystery of her death still remains a question but more and more research is being done. The Nikumaroro Castaway is the way to go. Why believe an idea that doesn’t have science and data to back it up? With this belief you have a lot of solid evidence. Amelia landed and died on the Nikumaroro Island when she ran out of gas and couldn’t communicate back home. 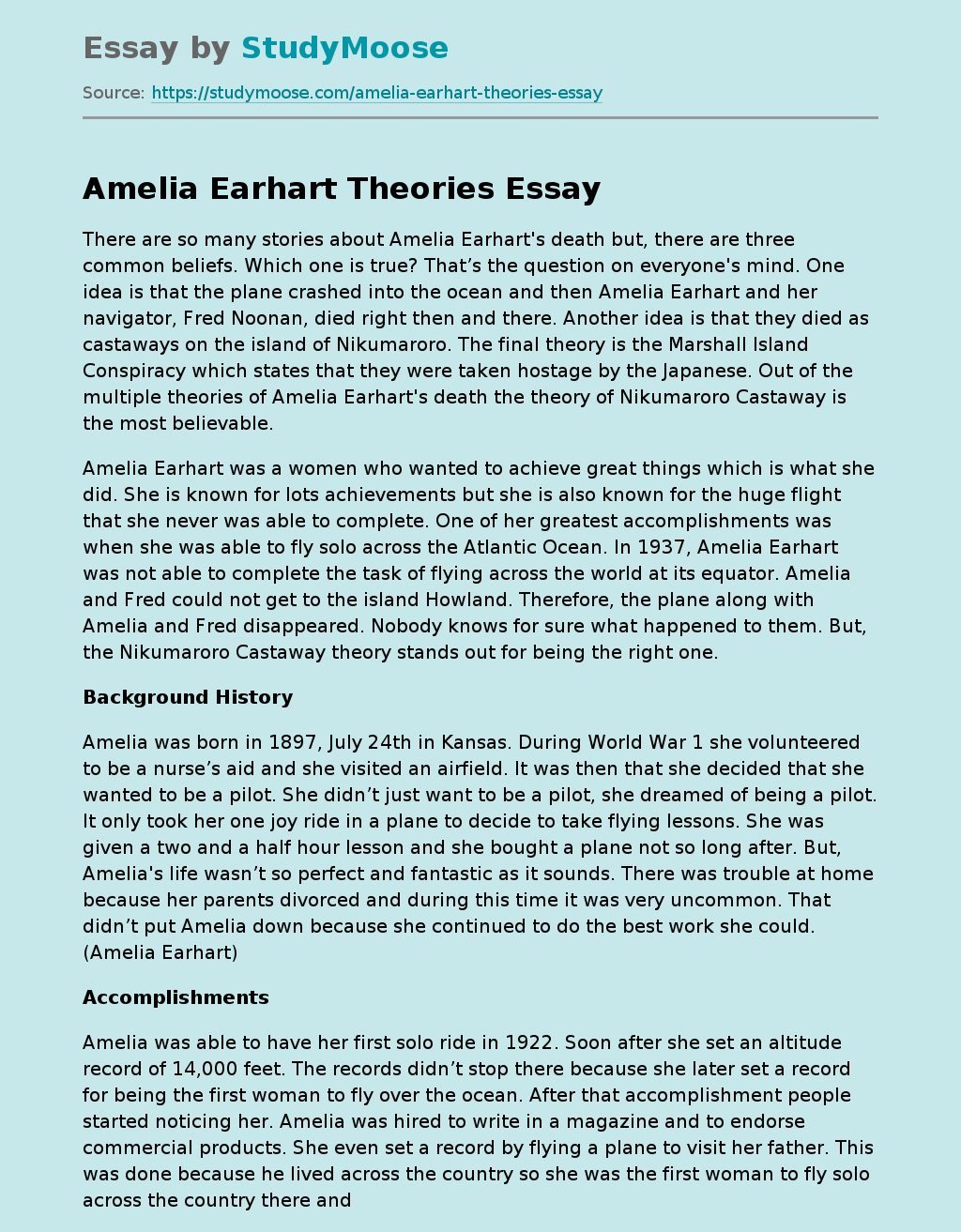