In the Batch ’81 (MVP Pictures, 1982) by Mike de Leon used the school as microcosm of Philippine society under martial law. Seven students are simultaneously applied to be members of a fraternity. The masters asked them to do the rituals of initiations, to test their stability in the decision to be frat brother through physical and psychological torture. Repeatedly emphasized the need for the neophyte oath to be faithful to her peak of the ritual.

Misunderstanding as to have a neophyte in a collaboration of rival fraternity, there was a bloody battle that killed two neophyte lives.

In the last part of the movie, Sid Lucero (Mark Gil) the strongest applicant, now runs initiation ritual. In a scene, the master asked and if you do not answer the question correctly they press its switch button and the neophyte will suffer the current with Ronnie Roxas, Jr.. (Ricky Sandico) one of their colleagues. The question, Is Martial Law good or bad for the country?.

Notably one of the applicants is the teacher, Santi Santillan (Noel Trinidad). Superior to his age he wants be a member, but he demonstrated more endurance and fortitude. If the review described him as an expression and insight of the film, appears to involve the bending Academy values ​​oppose Batch ’81.

The highlights of Mike de Leon film is the scene of fighting between Omega and Sigma Alpha Omicron Kappa Sigma. Extreme violence and bloody murder of the content of the scene but no direct manifestation of horrifying detail. De Leon attributed the Nazi perversion of the city occupied by Germany during World War the legal fraternity violence.

In a demonstration of students, adapt the Alpha Kappa Omega of scenes. At the end of Batch ’81 was master SID, the neophyte who rabidly conform to the laws of Alpha Kappa Omega. He also now makes the new batch of the neophyte. Obviously the point of Mike de Leon is that Heritage of the sadism of martial law authorities, and in the future, continue the existence of cruelty and violence being implanted in the people.

Theme: To encourage the students to be a neophyte members and show the initiation rites of different fraternities.

Reaction: In this movie it shows how much obstacle you will encounter when you join fraternities. The pain will last forever and I will not even try to join in any of this fraternity.I felt sad and mercy to the people who joined in frats.

Director: Mike De Leon Miguel Pamintuan de Leon is a noted Filipino film director, cinematographer, scripwriter and film producer. His is also known as Mike de Leon. He was born in Manila on May 24, 1947 to Manuel de Leon and Imelda Pamintuan. His interest in filmmaking began when he pursued a master’s degree in Art History at the University of Heidelberg, Germany. 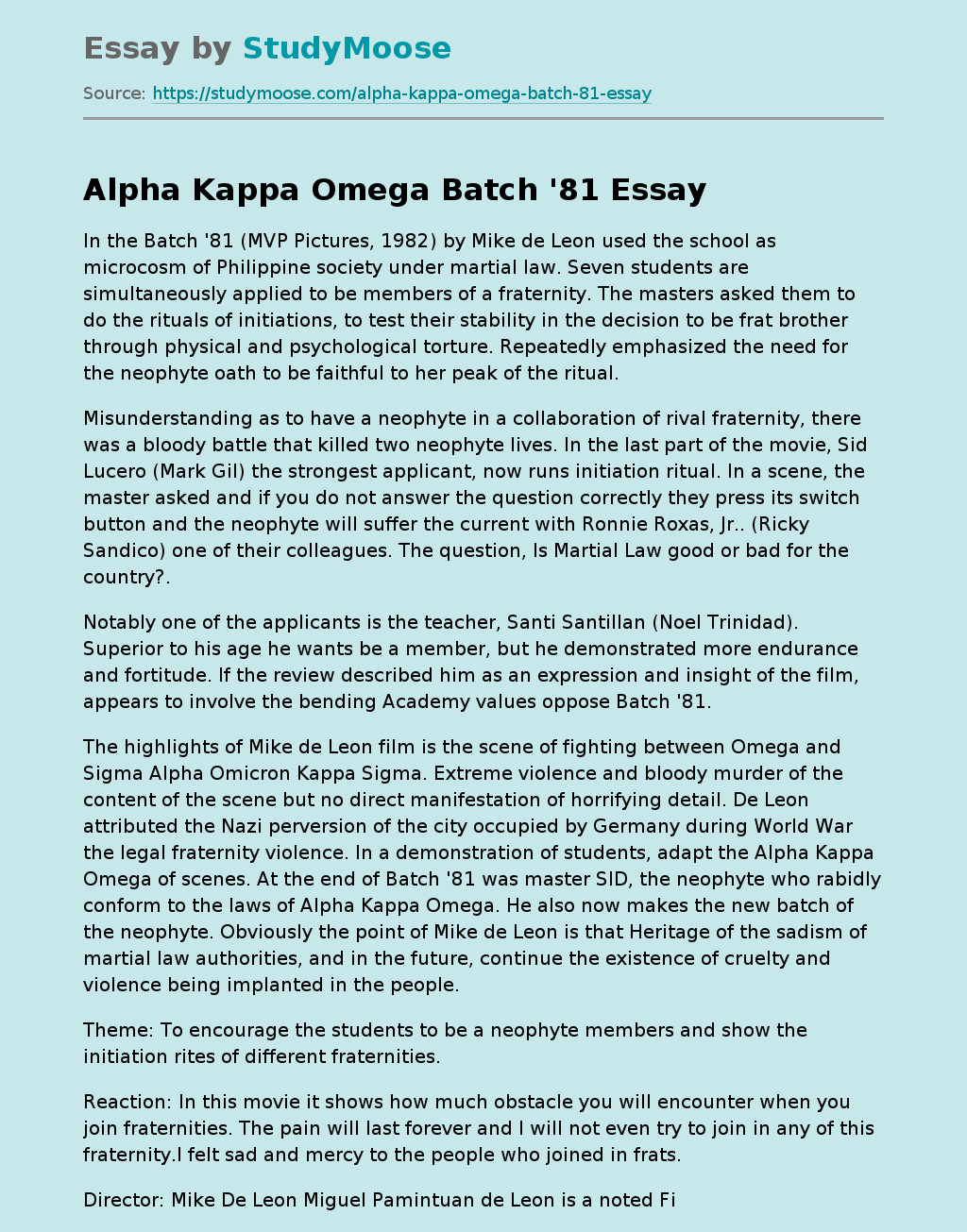