USES AND GRATIFICATION OF WHATSAPP AMONG STUDENT SEMESTER 6 ALPHA COLLEGE OF TECHNOLOGYCHAPTER 2: REVIEW OF LITERATURE2.1 INTRODUCTION This chapter explains about literature review which have been done on the students often find uses and gratification of WhatsApp. Additionally, researcher focuses on the related of teamwork. In addition, theoretical framework and conceptual framework of the study are introduced respectively. in theoretical of the study, researcher analyzes uses and gratification of Whatsapp in teamwork in social exchange theory among students semester 6 College Technology Alpha.

Don't use plagiarized sources. Get your custom essay on
“ USES AND GRATIFICATION OF WHATSAPP AMONG STUDENT SEMESTER 6 ALPHA COLLEGE OF ”
Get custom paper
NEW! smart matching with writer

2.2 LITERATURE RIVIEW In the journal Impact of WhatsApp messages to students at universities, sociological studies reveal some of the works available in India and elsewhere but most of them are on social networking sites as a whole. Therefore WhatsApp is a social media application, literature review on this paper can also be discussed with it. According to Cox and Rethman (2011) social media can be defined as a form of electronic communication where users can interact between people freely and can exchange and discuss information, ideas, personal messages and other content, between.

In addition, using multimedia messages, personal words, pictures, videos and audio and using the online platform just by connecting to the Internet. While for Anshu Bhatt and M. Arshad (2016), they know WhatsApp impact on teens especially students who need Whatsapp in their daily lives. Data were collected from teenagers from Agria, India as many as 100 samples. In his research shows that Whatsapp has a positive and negative impact on teens. This affects their education, behavior and daily life. They will be very addictive.

USES AND GRATIFICATION OF WHATSAPP AMONG STUDENT SEMESTER 6 ALPHA COLLEGE OF. (2019, Aug 20). Retrieved from https://studymoose.com/uses-and-gratification-of-whatsapp-among-student-semester-6-alpha-college-of-essay 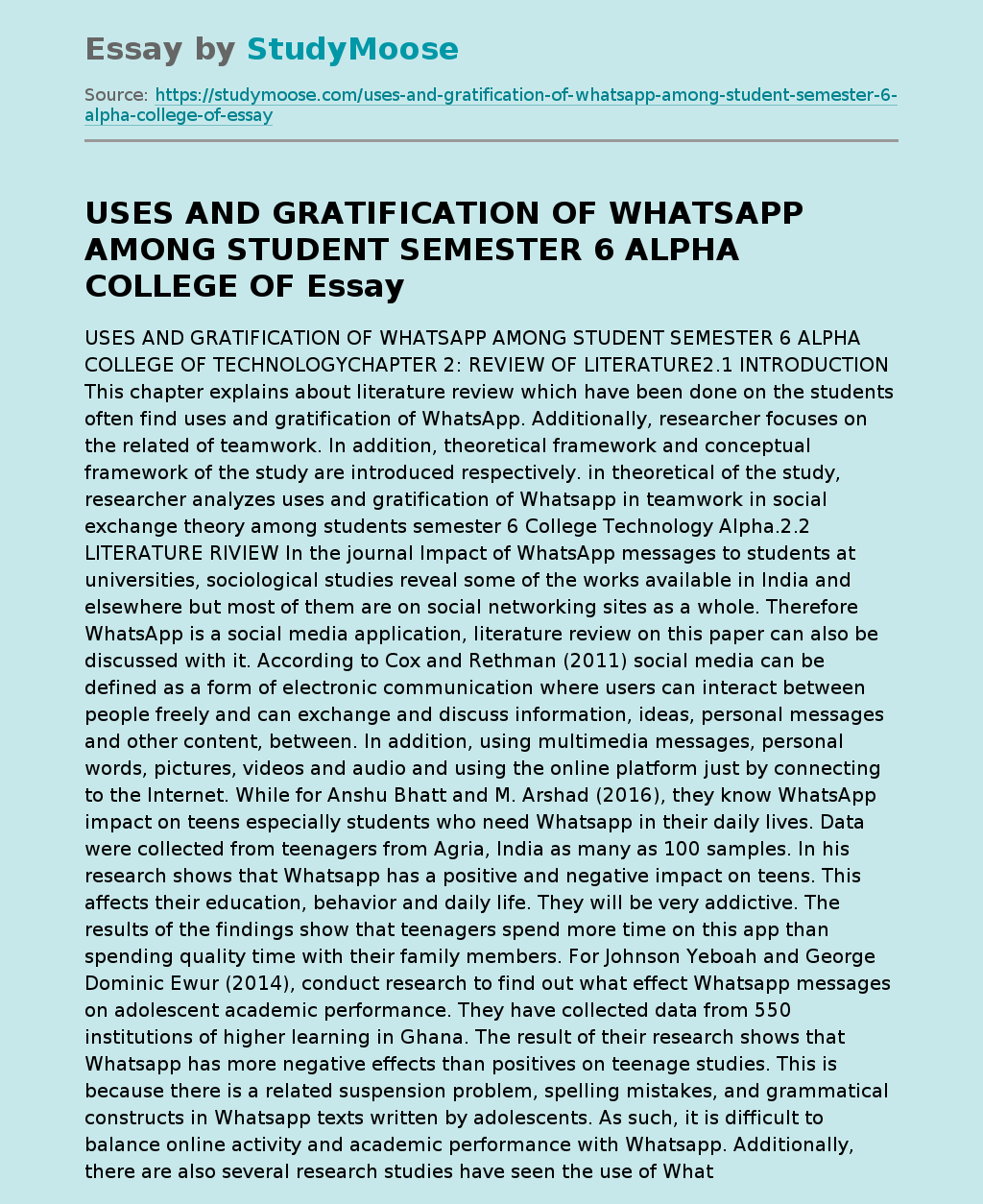