Adolescence and Substance Abuse or Addiction

Adolescents, or teenagers, use drugs (prescription and illegal) and alcohol for many of the same reasons as adults. Most notably, the pleasure or euphoric feeling associated with use and as an escape from the stress and pressure of a situation or of life in general. Many students have even started using prescription drugs, such as Adderall and Ritalin. This paper will discuss the relationship between substance abuse or addiction and teenagers, and the affects this causes on their developing brain. In addition, information will be provided concerning how a healthy spiritual development can affect the likelihood of teen use, abuse, or addiction to drugs and alcohol.

Don't use plagiarized sources.
Get Your Custom Essay on Adolescence and Substance Abuse or Addiction Just from $13,9/Page

Finally, the national and local prevalence of adolescent addiction, and news coverage of adolescents and drug-related incidents in Knoxville, TN will be examined.

Alcohol seems to be the initial exposure to abuse and addiction among teenagers, particularly due to the fact that it is legal and more readily available than other substances.

The Adolescent Health Facts (2012), which stated that 20% of high school students drank alcohol for the first time before the age of 13 in 2011. Furthermore, 40% of teens who drank, obtained alcohol through someone giving it to them. According to Feldman (2014), drinking, over a period of time, can lead to tolerance and diminished positive effects associated with consumption, which in turn leads to an increase in quantity of alcohol consumption in order to achieve those positive effects. Whether adolescents drink throughout the day or in binges, alcohol use becomes habitual for some teens and can lead to physical and psychological addiction when the habit cannot be controlled. According to Toor (2014), the majority of people, when asked, would state that marijuana is the gateway drug. Although, through his research, he found that “…teens who abused alcohol are twice as likely to abuse prescription opiate drugs, than those who only used marijuana”.

The use of legal and illegal drugs is increasingly problematic in adolescence. According to Feldman (2014), drug use and abuse among teenagers has become quite common, for instance “…one in 15 high school seniors smokes marijuana on a daily or near-daily basis”. The Adolescent Health Facts (2012) stated that in 2011, 40% of high school teens had used marijuana one or more times in their lives. In addition, from 2009 to 2010, 6% of adolescents ages 12 to 17 had used pain reliever for nonmedical reasons. Factors related to adolescent drug use include the use of drugs by celebrities and famous “role models” and peer pressure, but the newest reason for drug use is to enhance academic achievements (Feldman, 2014). Students are using prescription drugs such as Adderall and Ritalin to increase focus and ability to study while enabling them to do so for long periods of time. Unfortunately, most legal and illegal drugs teenagers are using are highly addictive and can result in biological and psychological dependence (Feldman, 2014).

Affects the Developing Brain of Adolescent

Biological addiction to drugs causes physical, and possibly lasting, changes in the nervous system (Feldman, 2014). Uppers, such as amphetamines and cocaine, stimulate the central nervous system causing an increase in the chemical and electrical activity in the brain (Martin, 2014). The desired effects of these drugs is a product of the release of neurotransmitter called norepinephrine and epinephrine. The depletion and imbalance of theses neurotransmitters cause both physical and psychological problems. Downers, such as painkillers, sedatives, and alcohol, slow down the overall functioning of the central nervous system. The initial response to downers is similar to that of uppers, due to the lowering of inhibitions, but long term the drugs depress the central nervous system and cause negative side effects including impaired judgment and memory problems (Martin, 2014).

According to Lakin (2011), the warning heard by teenagers since before kindergarten just do not work. Juanita Boring, health-care coordinator at the Juvenile Detention Center in Knoxville stated, some adolescents start using drugs as early as 8 years old, starting with marijuana and graduating to prescription drugs over time. She goes on to say that most can name major pill brands like they would the days of the week. Will, a 17 year old inmate stated that fun turns into desperation fast, and trying pills offered by a friend turns into breaking into homes to make money for pills.

In conclusion, alcohol and drug abuse and/or addiction during adolescence has physical consequences and can be altered by positive spiritual development during that time. The relationship between teenagers and substance abuse is not much different from that of an adult. Fundamentally the positive and negative effects are the same. The impact of drugs and alcohol on the brain is a biological addiction in which there are changes to the central nervous system which leads to a necessity of the drug in order to maintain normalcy. Prevalence of substance abuse nationally and on a local level in East Tennessee is fairly equal, meaning there is much room for improvement. Future research relating to early childhood warnings with a spiritual context would be useful in developing updated programs and literature for awareness and deterrence.

Adolescence and Substance Abuse or Addiction. (2016, Mar 11). Retrieved from https://studymoose.com/adolescence-and-substance-abuse-or-addiction-essay 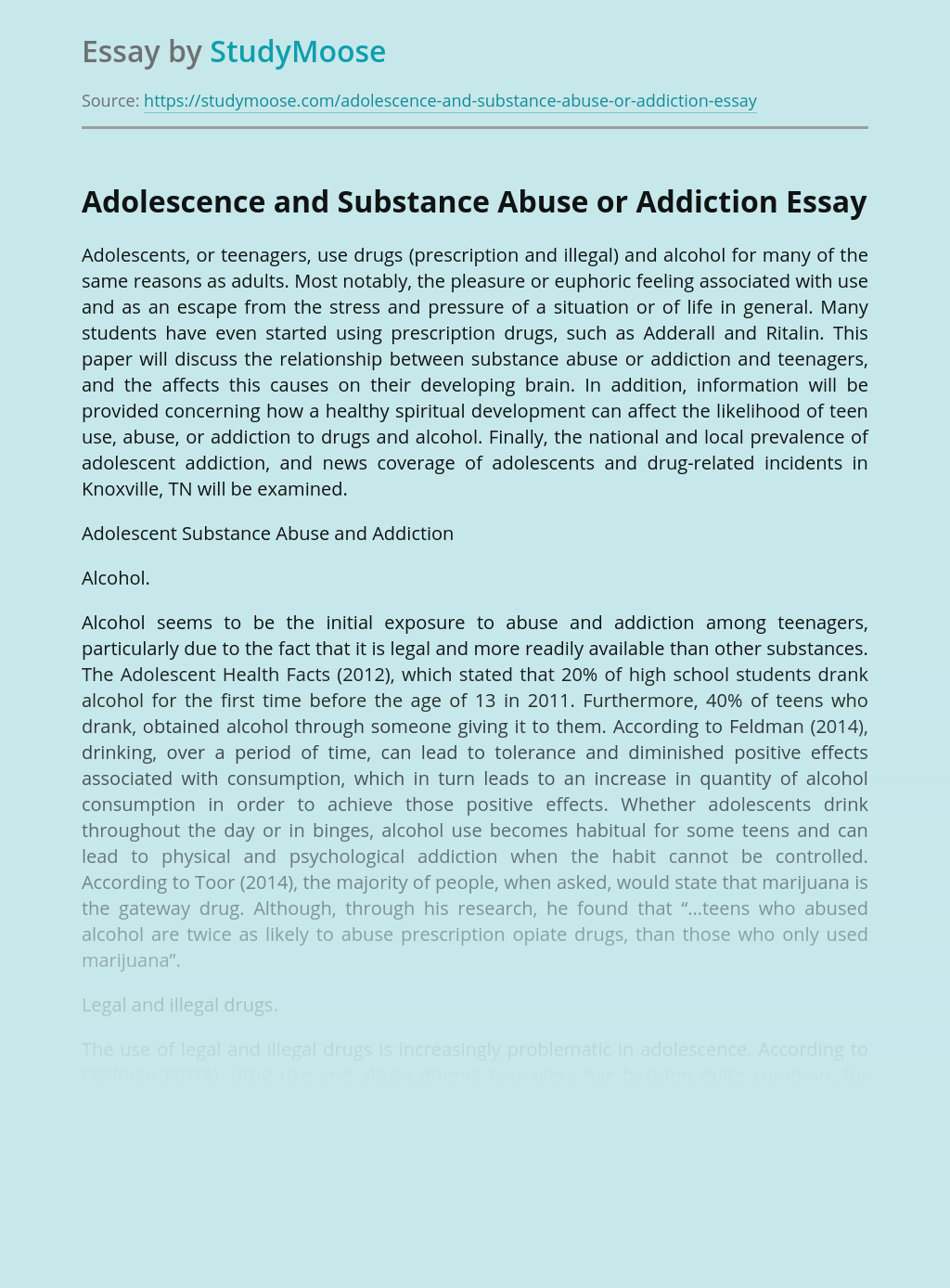 Gambling is a distraction for most people, something to look forward to on a vacation or the occasional trip to the racetrack. However, there are others who can’t control their interest in gambling. Instead of doing it on an occasional basis, it becomes an everyday activity and a cruel addiction. Individuals who become addicted to...

A research paper on cocaine

Grown in the countries of South America, with Columbia being the most productive, the Erythroxylon Coca bush is the natural origin of cocaine, a central nervous stimulant. Its history is as rich and diverse as the people using and dealing the drug. Cocaine use dates as far back as the 16th century when it was...

Get Essay
Substance Abuse and Addiction: Is There a Solution?

Is drug addiction a disease or a choice

The danger of computer games

CHAPTER I THE PROBLEM Introduction It is known that we are living in technological era. The computers become irreplaceable tool in everyday life of almost each person. The adult users generally use it for business purposes while youngsters for computer games. Computers became the part of our life and very important component in the spheres...