1. Established brand name – this means that Adidas has already built up a good reputation and it has a large market share within its industry. 2. Good retail links – Adidas has established good links with shops and outlets, which sell Adidas’s products. 3. Established worldwide distribution network – this means that Adidas’s products are shipped to a large number of countries. 4. Famous sports stars advertising products – Adidas has a series of football superstars who wear/advertise their products, including David Beckham, Zinedine Zidane, Stephen Gerrard etc.

5. High level of sales – Meaning Adidas sell a large amount of products. 6. Good reputation for quality – Adidas have built up a good reputation over the years for the quality of their goods.

1. A large amount of finance is required for research and development of new products, therefore their prices are high – this means that Adidas require a large amount of funds so that they can carry on producing top of the range products. 2. Reliant on the sport industry – This means that if there was no longer a market in the sport industry, Adidas wouldn’t be able to survive as they only produce goods within this industry.

4. New unrelated products – Another option for Adidas is to make new products outside of the sports industry.

1. Competition – Adidas’s competition includes Nike, Reebok, Puma, Umbro, Diadora and Lotto etc. These organisations could ultimately take Adidas’s market share, forcing Adidas out of the market, making them bankrupt. 2. Inflation of materials would cause prices to rise, therefore less customers would buy Adidas’s products – this means that if the prices of materials used were to rise then this would cause the prices of Adidas’s goods to rise, as the products would be more expensive to make. This would mean that not as many people would buy their goods at higher prices.

http://www.telegraph.co.uk/finance/london-olympics-business/8545104/London-2012-Olympics-Adidas-aims-to-beat-Nike-into-second-place-at-Games.html London 2012 Olympics: Adidas aims to beat Nike into second place at Games It is not only the athletes that will be competing for first place at next summer’s Olympic Games. Adidas, the German sportswear brand, plans to use the games as a springboard to overtake its arch rival Nike as the biggest sportswear company in the UK.

Nike is currently market leader in the UK with an 18pc share of the ultra-competitive £4.3bn sportswear market. Adidas is in second place with a 15pc share, but hopes that its status as official sportswear partner of the Games will help it achieve its goal of overtaking Nike by 2015 at the latest. As well as kitting out the athletes in 25 of the 26 Olympic sports – equestrianism requires very specialised equipment – Adidas will dress the 70,000 Olympic volunteers, provide the outfits for the pre-games torch relay and create clothing for the athletes to wear in the Olympic Village. Adidas is also the Games’ official clothing licensee, and will sell Olympic-themed and branded clothes through its own stores and third-party retailers, such as Tesco and Asda. On top of this, it has appointed Stella McCartney, the designer and daughter of Sir Paul, as the creative director of Team GB.

She will provide the team with garments such as their signature tracksuits and has also designed more fashionable “capsule” ranges that will be available on the high street. (High street retailer Next will provide Team GB with their formalwear, such as the suits for the opening ceremony.) There will be a big sustainable and environmentally-friendly element to the clothing, Adidas said. It is not inconceivable that some of the athletes’ kit will be at least partially made from recycled plastic drinks bottles. Herbert Hainer, Adidas’s chief executive, said the company is hoping to achieve sales of£100m from its Olympic clothing lines.

Mr Hainer added that he is confident Team GB will do well. “The preparation and enthusiasm is tremendous, and it will help us hit our target,” he said. Adidas will bolster its marketing throughout the UK in the run-up to the Games by opening 100 temporary “AdiZones” – areas that will include free-to-use tennis, football or basketball equipment. Gil Steyaert, Adidas’s managing director of market north – the geographical area that includes the UK – said these zones will attract younger consumers to the Adidas brand. “We are one of the brands that is most relevant to the youth market. We like to believe we will be the cool brand of the Games,” he said. The whole point of the exercise is to knock Nike off its perch in the UK, he added. To do this, Adidas must beat Nike in London, where it is the top sports brand by some distance.

Mr Steyaert said Adidas is the most popular brand in certain areas of the north of England, such as Liverpool. However, it must win London if it wants total dominance. Mr Steyaert said: “London is a place where we don’t have leadership yet. While we do have leadership in other parts of the UK, London is crucial.” Adidas has invested around £100m in the 2012 Olympics. This figure is split between the cost of becoming an official partner, the cost of manufacturing the clothes for the athletes, the volunteers and the retailers and the cost of marketing the ranges and the company. Even if the company achieves its desired top line sales of £100m, it will only go some way to paying off the £100m bottom-line investment.

Mr Hainer admitted that if looked at purely on a profit and loss basis, the investment is a “big loss”. However, he said that the positive benefits to Adidas’s brand and standing in the UK are manifold. Nike is unlikely to sit back and allow Adidas to press ahead with its assault. It has taken a large store in the Westfield shopping centre just next to the Olympic site, a shopping centre through which 70pc of ticket holders to the main stadium will pass, and it has signed a deal to be part of Boris Johnson’s Legacy for London sports plan. But Mr Hainer is equally bullish. “I am very confident that we will have a presence that won’t be missed,” he said. “When you are playing in the sporting goods arena, you want to win.” Adidas’ rich history in the Olympics

In the 1928 Amsterdam Olympics, Lina Radke-Batschauer was the first athlete to win an Olympic gold medal wearing Adidas shoes. She set a record time in the women’s 800m. Adidas shoes were also worn at the 1952 Helsinki Games by Emil Zatopek, the Czech long-distance runner, who won three gold medals in one week. Adidas-wearing athletes also dominated the 1968 Olympic games in Mexico. Among them was Dick Fosbury, who cleared 2.24m to take the gold medal in the high jump using a new technique.

Nike and adidas are sportswear companies whose products are popular around the world, while Nike has the upper hand in sales and sponsorships, Adidas is growing. Adidas owns Reebok, Taylor Made golf company and Rockport. Nike owns the Jordan Brand, Umbro, Hurley, Converse and Cole Haan. 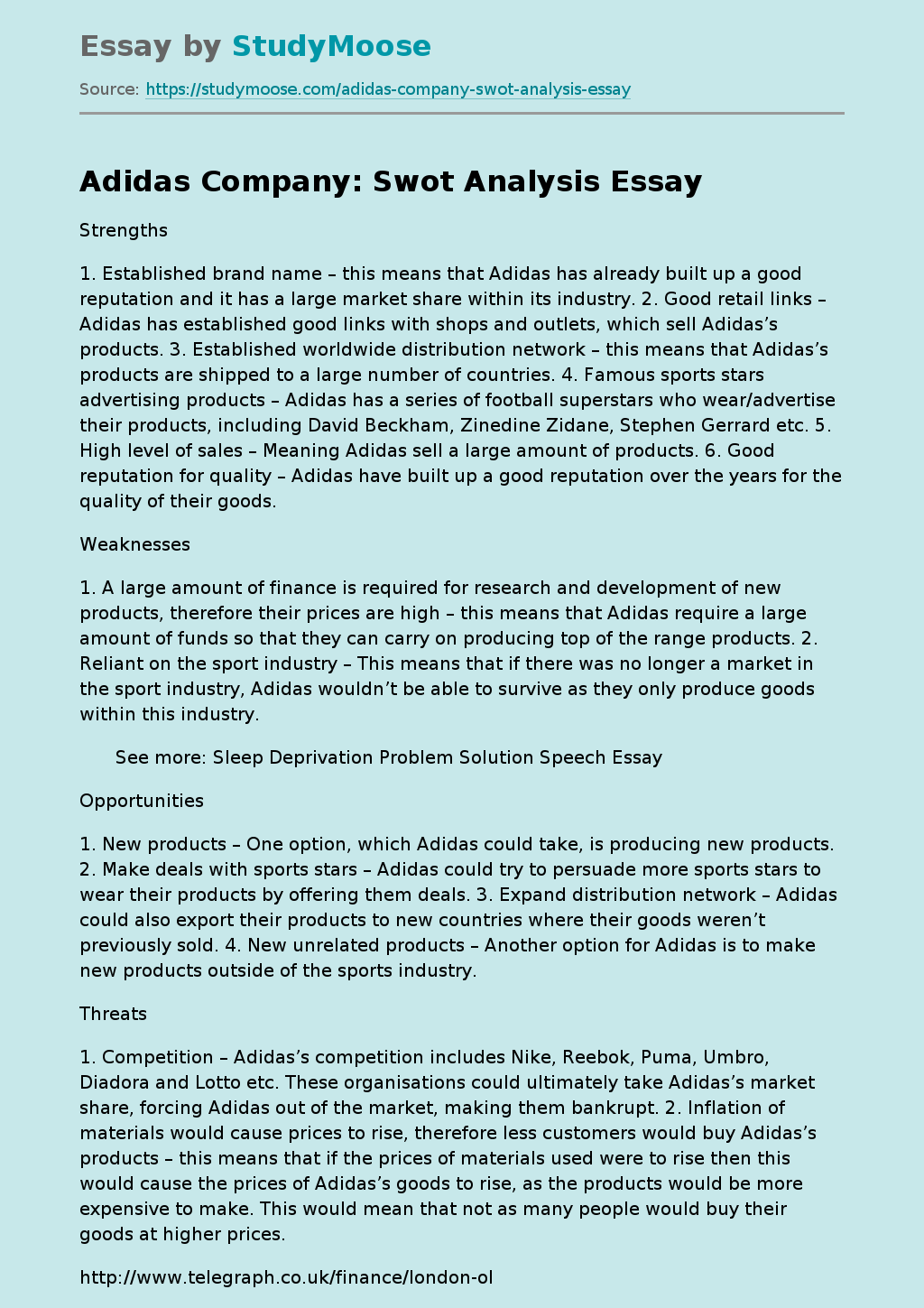