Across a Hundred Mountains Notes and Quotes

– Eleven-year-old Juana lives with her Amá and Apá in their little shack at the outskirts of their town in Mexico. – On the night of a flood, which enters their shack, her mom leaves Juana on top of the table holding the infant, Anita, to go try to find her spouse.

– Juana goes to sleep and loses hold of the infant, which drowns. Now in debt again to the most affluent man in the village, Don Elías, who paid for the funeral, Apá decides to risk whatever and go to America to earn the cash to pay off Don Elías.

Don't use plagiarized sources. Get your custom essay on
“ Across a Hundred Mountains Notes and Quotes ”
Get custom paper
NEW! smart matching with writer

– When no word originates from Apá– Miguel Garcia– the other villagers ridicule Juana and her mom, Lupe, with the horrible word: abandoned. But there’s still Don Elías to settle, and there’s only one thing he’s asking for and one thing Lupe can give: her body.

– As her mother declines further into regret, anxiety, madness and alcohol, Juana never quits hope that her daddy is simply across the mountains, that he hasn’t forgotten or deserted them.

Her determination to find him sees her travel to Mexico City, where she meets Adelina, who assists her find the coyote that assisted her daddy cross the border Characters

– Juana: A 12 years old lady with black hair, she was thin, extremely innocent, poor, aggressive and honest. She had a tough life and constantly felt guilty of the death of her little sister. Her function was to discover her dad in “El otro Lado”.

She is the main character of this book and she will live the hardest times of her life looking for her missing daddy.

– Adelina: A more less 17 years of ages woman, she works as a prostitute, she lives in Mexico. She escape from his home since she fall In love of her partner, and he was the one who introduce her in the prostitution organisation, she is a friendly, excellent, truthful and poor individual.

– Miguel Garcia (Apa): He was a campesino and he operated in the fields planting and gathering crops. He felt guilty of his little daughter dead. He wants a better life for his family so he decided to go to “El otro Lado”, and he died trying it.

• Lupe (Ama): A religious woman who follows the Mexican traditions and prays a lot to the Virgen de Guadalupe, she has a long hair, loves her family, she was with a lot of grudge with Juana because of Anita’s dead. Later she became an indigent woman, alcoholic and with mental

• Don Elias: A fat pig man who is the richest man in the town, everybody is afraid of him, he is the one who pay for Anita’s funeral, and the Garcia family owns him money. Is a repugnant man with no values, he don’t care of nobody, he just care of himself and he will do the necessary to get what he wants.

• Don Ernesto: A very good man who helped Adelina (Juana), when she arrives to Los Angeles city, later he became like some kind of father figure to Adelina (Juana). He offers the shelter as a temporary house, but she breaks her final promise to him when she denies giving a chance to be happy with Sebastian.

Across a Hundred Mountains Notes and Quotes. (2016, Nov 19). Retrieved from https://studymoose.com/across-a-hundred-mountains-notes-and-quotes-essay 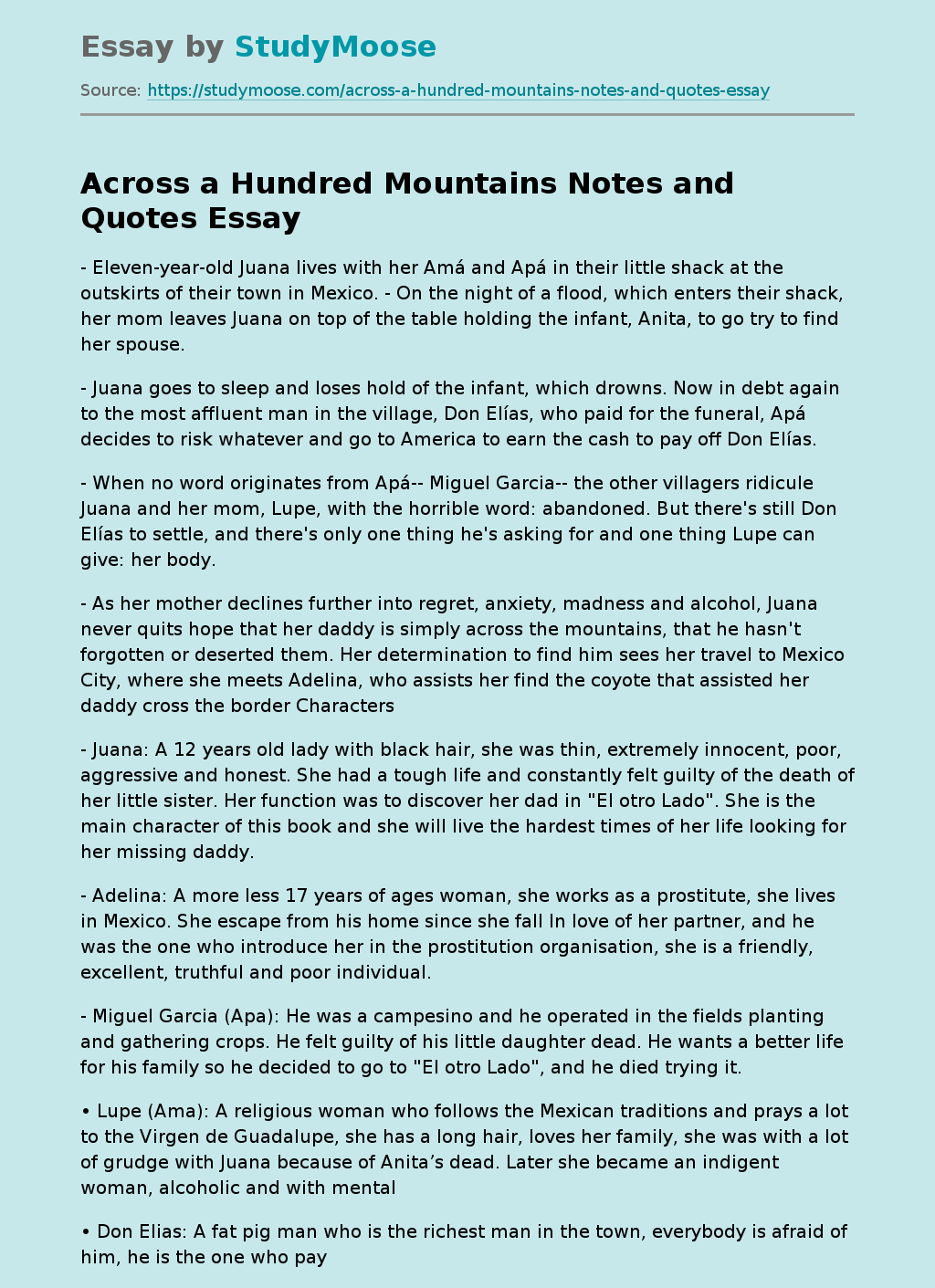