A Critical Analysis Of "The Story Of An Hour"

A critical analysis of “The Story of an Hour” Kate Chopin’s “The Story Of An Hour”, in my opinion, is a good piece of literature. It is well written, clearly written, entertaining, and it brings a bit of a challenge to the reader.

Starting with the title, Chopin described part of the setting. We already know that everything that happens during this little drama, happens within an hour.

Don't use plagiarized sources. Get your custom essay on
“ A Critical Analysis Of “The Story Of An Hour” ”
Get custom paper
NEW! smart matching with writer

This title brought curiosity upon me because I did not realize that many things that could affect one’s life could take place in an hour. For example, the recent tragedy in America, within one hour much had happened in the borders of the United States and Chopin’s choice of title brought that to my attention, within an hour much could happen that could completely change someone’s life.

The way the story is written is very straightforward. The author tells you exactly what is happening but still leaves enough room for your imagination to fill in the blanks.

Proficient in: The Story Of An Hour

For example, when Chopin describes Louise’s room with “the open window, a comfortable, roomy armchair” (page 378), and then goes on to describe what Louise sees outside, she tells us that our protagonist isn’t living a bad life monetarily. Louise has a nice comfortable chair in her bedroom where she has a nice view of a square with trees and people.

The way Chopin describes the weather follows the same suit. “There were patches of blue sky showing here and there through the clouds”¦in the west facing her window” (page 378).

The author tells you what to imagine but there is still room for you to add, for example, the sun shining through the clouds and warmly hitting her face, among other things.

The language used was also good. It wasn’t the usual complicated Shakespearean English, it was, if you will, a more updated version of it. Because she used Modern English, it was easier to follow and understand, I didn’t have to stop and figure out what a certain word meant. At the same time, it is not to say that the piece was poorly written. In many instants as I read it I noticed the way it flowed so well and how beautiful it sounded. The description Chopin gives of Louise sitting on the chair describes it best. “She sat with her head thrown back upon the cushion of the chair, quite motionless, except when a sob came up into her throat and shook her, as a child who has cried itself to sleep continues to sob in its dreams.” (Page 378). Simple, yet deep.

Throughout the whole story I didn’t really have an urge to stop reading it. Chopin kept me there reading along because I was curious to know more about how Louise felt and if she was going to be ok since it was mentioned that she had heart problems. The story was very entertaining although short. I believe that even if Chopin had dragged on a little more I still would’ve read it right through.

Louise showed some strange signs upon receiving the news of her husband’s death. It can even be said that Chopin intended for the audience to think that Louise might have had something to do with her husband Brently’s death. And Richards might have been involved too. As the news were received at the newspaper office, Richards was already there waiting for it and didn’t leave until a second telegram had been sent confirming the death of his friend. The fact that she “wept at once” (Page 378) also shows some kind of possible involvement, perhaps a fake cry scene was put here just so her sister would see that she was upset about her husband’s death. It is mentioned that she while sitting on her chair she sank “pressed down by a physical exhaustion that haunted her body and seemed to reach into her soul.” (Page 378).

That to me sounds a bit like guilt, the use of the work “haunted” shows that this is a negative feeling. Once Chopin starts to describe Louise, “She was young, with a fair face, whose lines bespoken repression and even a certain strength.” (Page 378), that could be describing the repression that she felt because of her husband’s attitude towards her. “It was not a glance of reflection, but rather indicated a suspension of intelligent thought.” (Page 378), this sentence tells me that she hasn’t been logically thinking anymore, it also helps to show that perhaps she did have some kind of involvement on her husband’s death, not being able to cognitively solve her problems with him.

She is waiting for a feeling, maybe it is guilt from what she has done and when it says that she would fight this feeling back it is because she doesn’t want to feel guilty. And later on this feeling is called a monstrous joy. The cries of freedom also help my observations come true, she had a reason to do it, she wanted to be free of her husband’s ways. Once her husband opens the door, she screams and has a heart attack, she was not expecting to see him ever again, she was filled w joy until the moment she saw him alive. Perhaps she is guilty of trying to kill her husband.

The confusing challenging part comes when Richards tries to get in the way of Louise’s sight so she is not able to see Brently. I don’t understand it, what does it mean? Did Richards maybe tell Brently to do something else rather than take this train trip but did not tell him that the train “accident” was to occur? Maybe it is so and he was trying to not allow Louise to see Brently because Richards and Louise had planned it all and he backed out on it. Maybe Louise’s intention was to be with Richards after her husband died.

After reading the story several times this is my interpretation. It is a very good story that could have many meanings, this being one of them. Evil, or Louise’s desire to kill her husband, failed once again because of Good, or Richards strong friendship with Brently.

A Critical Analysis Of "The Story Of An Hour". (2016, Jul 15). Retrieved from https://studymoose.com/a-critical-analysis-of-the-story-of-an-hour-essay 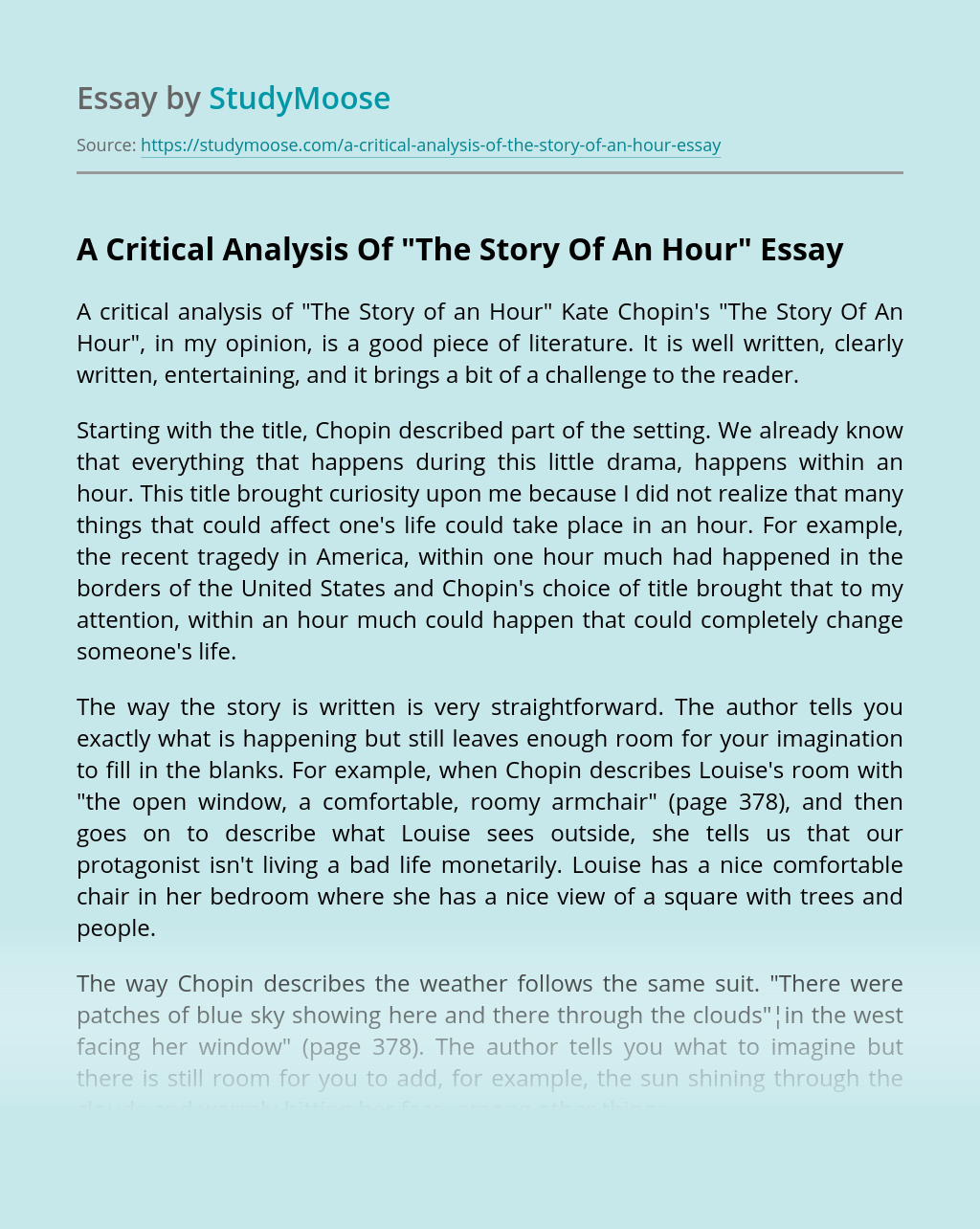