A Brief History of Starbucks

In 1971, Starbucks’ opened its first store at Pike Street Market in Seattle, by three partners Zev Siegel, Jerry Baldwin and Gordon Bowker. Starbucks opened with the intent of being a gourmet coffee bean retailer and coffee equipment seller. The Starbucks name and logo came from two influences; a character named Starbuck in the classic book, Moby Dick, and a mining camp on the base of Mt. Rainier called Starbo. These two influences were combined to create Starbucks (Wikipedia, 2006). n 1982, entrepreneur and current chairman, Howard Schultz, joined the company.

Don't use plagiarized sources. Get your custom essay on
“ A Brief History of Starbucks ”
Get custom paper
NEW! smart matching with writer

When Schultz joined the company, he wanted to change the company’s focus away from in home coffee production and coffee bean retailing, to also include selling coffee drinks. Schultz wanted to create an Italian espresso bar atmosphere to the Starbucks Company. Siegel, Baldwin, and Bowker didn’t like the idea, but in 1984 Schultz convinced the “founders of Starbucks to test the coffee bar concept in a new location in downtown Seattle” (Starbucks, 2003).

In 1985, Schultz decided to leave the company and start his own Italian espresso inspired company called Il Giornale. In 1987, Schultz got backing from local investors and purchased Starbucks. Shultz then changed the name Starbucks to Starbucks Corporation (Starbucks, 2003). Today, Starbucks has more than 12,000 stores globally and more than 8,800 in the United States (Reuters, 2006). Starbucks’ Mission and Objectives:

Mission Statements
Starbucks is different than many businesses; they combine aggressive marketing strategies with corporate responsibility. Starbucks wants to be more than “the world’s largest coffee shop chain,” (Reuters, 2006)

A Brief History of Starbucks. (2016, Apr 23). Retrieved from https://studymoose.com/a-brief-history-of-starbucks-essay 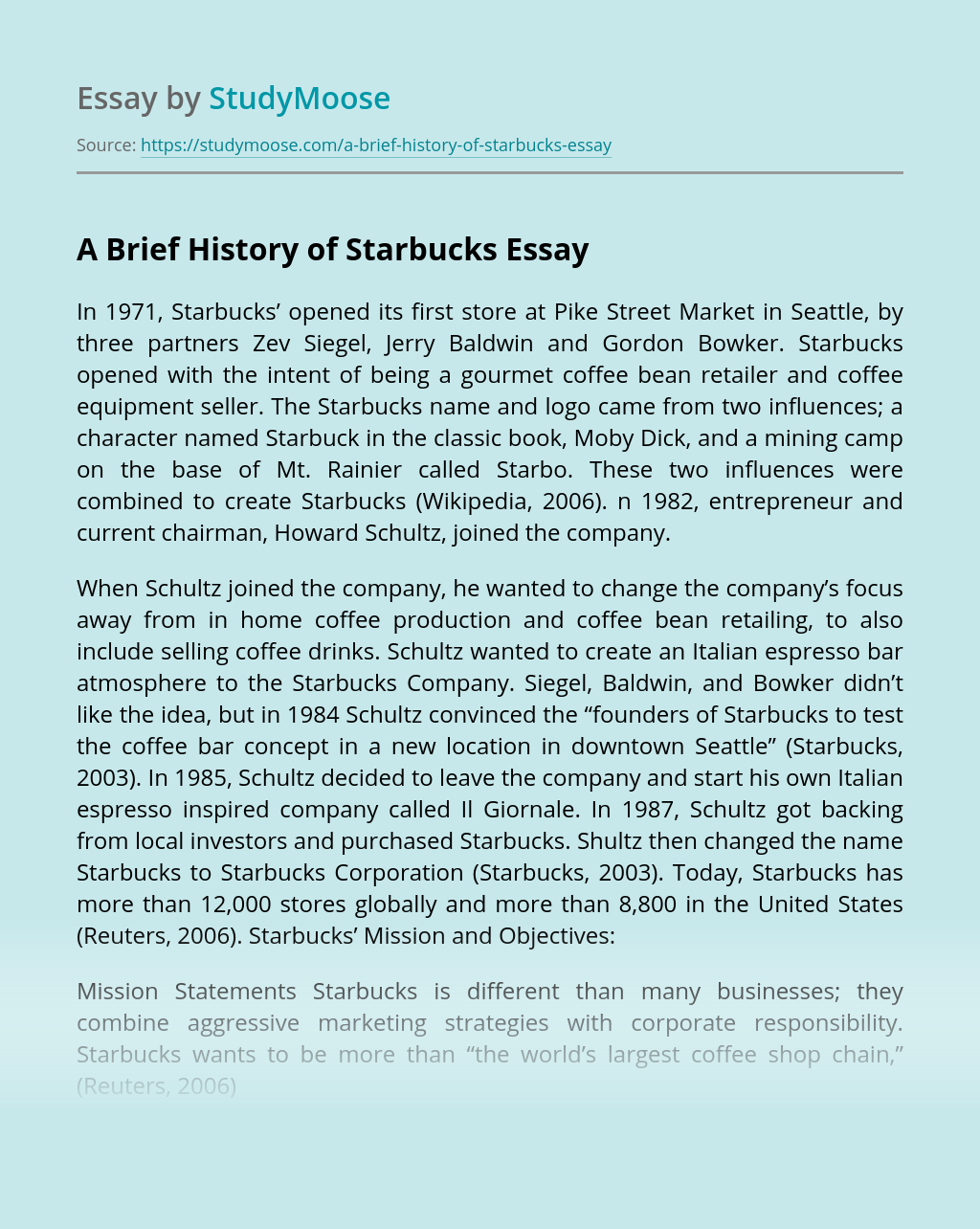