Venezuela is a country on the northern coast of South America

Venezuela – population: 32,740,533. Established: July 5, 1811 by the Spanish. A country with interesting and beautiful cities and landmarks, many famous historical figures, unique traditions and government. But what is Venezuela like? What cities or landmarks are there? What traditions do they have and what is their culture like? Venezuela has beautiful cities, indigenous culture and many historical figures, and unique government.

Venezuela is a country on the northern coast of South America with different backgrounds and nationalities. Its total area is 1868282196.969 square miles.

Don't use plagiarized sources. Get your custom essay on
“ Venezuela is a country on the northern coast of South America ”
Get custom paper
NEW! smart matching with writer

Compared to the United States, Venezuela covers: Virginia, West Virginia, North Carolina, Maryland, Ohio, Pennsylvania, Kentucky, Indiana, and New Jersey combined. It was founded on July 5, 1811 by the Spanish. Venezuela has many bodies of water including: Angel Falls measures 2,421 feet, is twelve times the height of Niagara Falls. Some of Venezuela’s beautiful lakes include Lake Maracaibo, which is the largest lake in Venezuela and it’s connected to the Gulf of Venezuela and Lake Guri, which is the fifth largest lake in Venezuela.

Canaima National Park is one significant landmark that covers 322,917 square feet of the land in South Eastern Venezuela and its borders are Brazil and Guyana. The park was established on June 12, 1962 and covers 65% of the land with Table Mountain formations. Another important landmark is its capital, Caracas. Caracas was discovered in 1522 and is the fourth largest city in Venezuela. Caracas is where Independence leader Simon Bolivar is buried and is the heart of Venezuela’s culture. What is the culture like in Venezuela?

To begin with, 50% of the country is Mestizos, which are a group of people who have a mixed of Spanish bloodlines and native bloodlines.

However, only 40% claim to be Spanish descendants. Venezuela has a national dance called Joropo which is a couples’ dance that uses Latin American instruments to perform the music, such as the Conga (large drums that musicians will have to stand to play them) and Claves (wooden sticks to hear sound clearly). Sports are important in Venezuela and their favorite sports are baseball and soccer; the most popular sport is baseball. In Venezuelan traditions, it’s traditional that men are bread winners and women are expected to stay home with their children. Family ties are also important and extended family ties are crucial. The National religion is Catholic, masses are held each week, and members are expected to attend services each Sunday. Christmas traditions in Venezuela, are that they celebrate the birth of Jesus on December 25. While some festivities may begin early as December 16 where masses are held every morning until December 24. Additionally, Misa de Gallo (Spanish name for Rooters’ Mass), which is celebrated on December 24, is said that a rooster would crow when the clock strikes midnight, indication the birth of Jesus. Traditional food in Venezuela may include Arepa, Empanada, and Cachitos.

Notably, there many historical figures, baseball players, and beauty pageants or actresses. First is Antonio Jose de Sucre (1795 – 1830). He was known as “The Gran Mariscal de Ayacucho” was a Venezuelan independence leader, who was trying to gain independence for Venezuela from Spain. Next, is Carlos Delgado Chalbaud (1909 – 1950) who was president of Venezuela from 1948 – 1950 and in 1950 he was considered a high-ranking officer. Thirdly, Hugo Chavez (1999-2013) was a Venezuelan politician and leader of the Fifth Republic Movement until his death in 2013. There is Miguel Cabrera (age: 36) also known as “Miggy” and is a Venezuelan professional baseball player who is the first base man for the Detroit Tigers of Major League Baseball. Dayana Mendoza (age: 33) who is a Venezuelan actress, model, and beauty queen. She won Miss Universe in 2008. Finally, there is Aida Yespica (age: 36) who is Venezuela’s television personality, model, and former beauty pageant contestant. There a many more famous people in Venezuela but those are a few but what about their politics? What’s going on in Venezuela today?

Today in Venezuela, there are many political issues happening. Currently, Venezuela’s opposition leader, Juan Guaido, has strongly encouraged the armed forces to work alongside with him to overpower President Nicolas Maduro. After the National Election, President Nicolas Maduro refuses to give up his power to the winner Juan Guaido and as a result, Juan Guadio has formed the National Assembly and declared himself as president. Now, the two are fighting against each other for who should be the rightful president of Venezuela. Speaking of politics, Venezuela’s first political party was the Venezuelan Community Party (PCV). Venezuela’s government, however, is called the Bolivarian Republic of Venezuela. Venezuelan wars include: The Venezuelan War of Independence, which was a war about independence for Venezuela from Spain and it lasted from 1811 to 1823. Another war, is called the Federal War where it was a Civil War between the Venezuelan Conservative Party and the Liberal Party. The Federal War is also known as “The Great War” or “The Seven Years War”.

To visit Venezuela, make sure to double check the Visa you have. Once arrived, you should immediately register your contact details with your consulate, which is a place or building in which the counsel’s duties are carried out. The consulate will also inform you and assist you in any emergency or evacuation. It is beneficial to be sure to have ALL your travel documents with you and be sure to check the latest traveling tip or consult your consulate to verify tourism laws. Luckely, the U.S. dollar bill is acceptable in Venezuela along with debit or credit cards. With social interactions or conversations, a handshake would be admissible when greeting someone. However, exchanging hugs with a handshake is informal when greeting someone, even for a second time, it may be considered informal. These are some traveling tips for Venezuela.

How about it? Venezuela truly is a beautiful county. It has a lot of historical background, with its geography, culture, and government. The lakes are magnificent with bright blue waters and houses on the beaches. Canaima is also astonishing with its table-top mountain formations. A unique country with a strong Catholic background. Venezuela. What a beautiful country.

Venezuela is a country on the northern coast of South America. (2019, Dec 15). Retrieved from http://studymoose.com/venezuela-is-a-country-on-the-northern-coast-of-south-america-essay 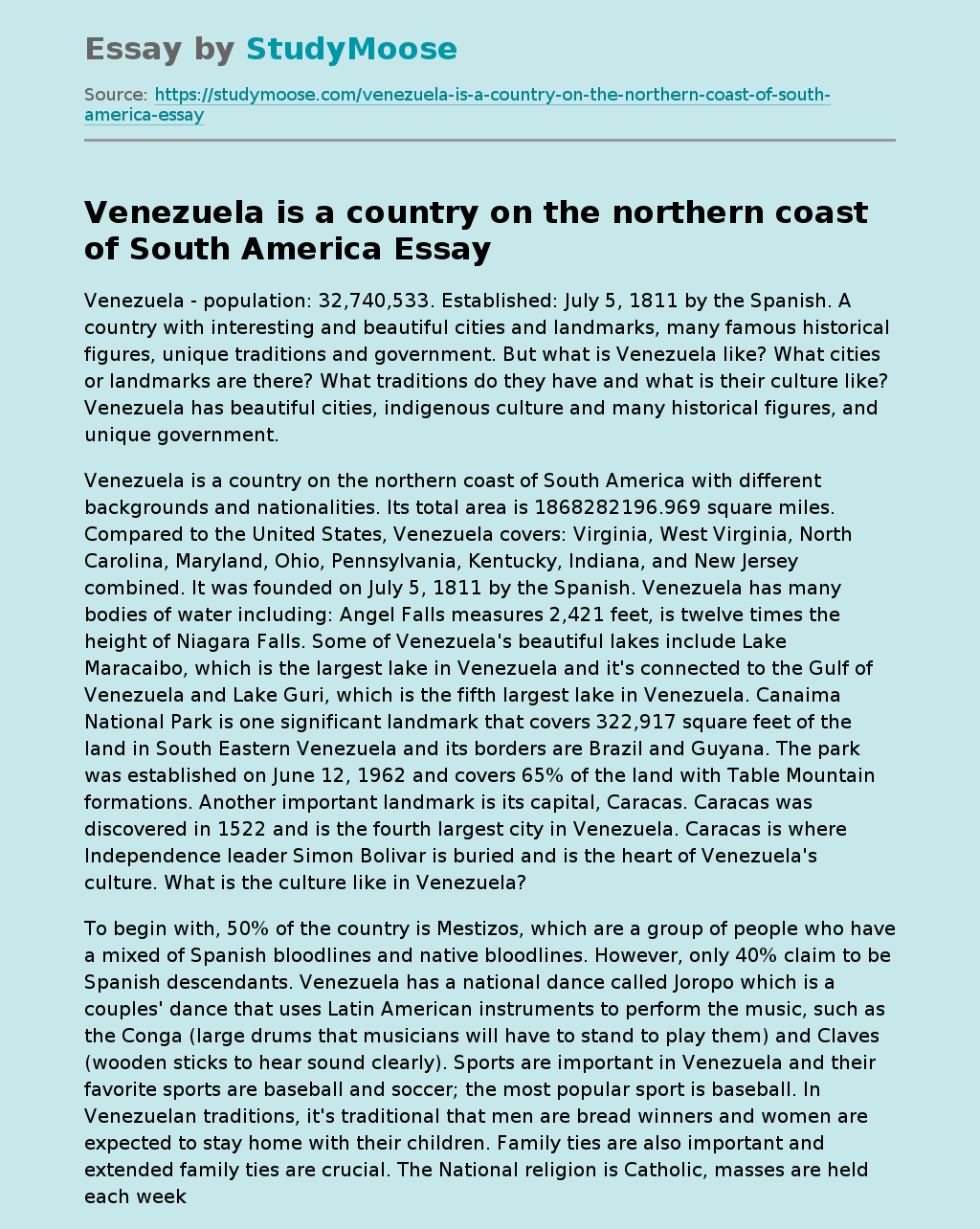