Standing in the trade show display booth for long hours and answering the same questions hundreds of times had been tiring. Yet, all the hard work had paid off. Each year, National Hardware Show officials held a contest to select the best new product introduced at that year’s show. The Trap-Ease had won the contest this year, beating out over 300 new products. Such notoriety was not new for the Trap-Ease mousetrap, however. People magazine had run a feature article on the trap, and the trap had been the subject of numerous talk shows and articles in various popular press and trade publications.

Don't use plagiarized sources. Get your custom essay on
“ Trap-Ease America: the Big Cheese of Mousetraps ”
Get custom paper
NEW! smart matching with writer

Despite all of this attention, however, the expected demand for the trap had not materialized. Martha hoped that this award might stimulate increased interest and sales. BACKGROUND A group of investors had formed Trap-Ease America in January after it had obtained worldwide rights to market the innovative mousetrap. In return for marketing rights, the group agreed to pay the inventor and patent holder, a retired rancher, a royalty fee for each trap sold.

The group then hired Martha to serve as president and to develop and manage the Trap-Ease America organization.

Trap-Ease America contracted with a plastics-manufacturing firm to produce the traps. The trap consisted of a square, plastic tube measuring about 6 inches long and 1-1/2 inches in diameter. The tube bent in the middle at a 30-degree angle, so that when the front part of the tube rested on a flat surface, the other end was elevated.

The elevated end held a removable cap into which the user placed bait (cheese, dog food, or some other aromatic tidbit). The front end of the tube had a hinged door. When the trap was “open,” this door rested on two narrow “stilts” attached to the two bottom corners of the door. See Exhibit 1. )2 The simple trap worked very efficiently. A mouse, smelling the bait, entered the tube through the open end. As it walked up the angled bottom toward the bait, its weight made the elevated end of the trap drop downward. This action elevated the open end, allowing the hinged door to swing closed, trapping the mouse. Small teeth on the ends of the stilts caught in a groove on the bottom of the trap, locking the door closed. The user could then dispose of the mouse while it was still alive, or the user could leave it alone for a few hours to suffocate in the trap.

Martha believed the trap had many advantages for the consumer when compared with traditional spring-loaded traps or poisons. Consumers could use it safely and easily with no risk of catching their fingers while loading it. It posed no injury or poisoning threat to children or pets. Furthermore, with Trap-Ease, consumers avoided the unpleasant “mess” they often encountered with the violent spring-loaded traps. The Trap-Ease created no “clean-up” problem. Finally, the user could reuse the trap or simply throw it away. Martha’s early research suggested that women were the best target market for the TrapEase.

Men, it seemed, were more willing to buy and use the traditional, spring-loaded trap. The targeted women, however, did not like the traditional trap. These women often stayed at home and took care of their children. Thus, they wanted a means of dealing with the mouse problem that avoided the unpleasantness and risks that the standard trap created in the home. To reach this target market, Martha decided to distribute Trap- Ease through national grocery, hardware, and drug chains such as Safeway, Kmart, Hechingers, and CB Drug.

She sold the trap directly to these large retailers, avoiding any wholesalers or other middlemen. The traps sold in packages of two, with a suggested retail price of $2. 49. Although this price made the Trap-Ease about five to ten times more expensive than smaller, standard traps, consumers appeared to offer little initial price resistance. The manufacturing cost for the Trap-Ease, including freight and packaging costs, was about 31 cents per unit. The company paid an additional 8. 2 cents per unit in royalty fees.

Martha priced the traps to retailers at 99 cents per unit (two units to a package) and estimated that, after sales and volume discounts, Trap-Ease would produce net revenue from retailers of 75 cents per unit. To promote the product, Martha had budgeted approximately $60,000 for the first year. She planned to use $50,000 of this amount for travel costs to visit trade shows and to make sales calls on retailers. She planned to use the remaining $10,000 for advertising. So far, however, because the mousetrap had generated so much publicity, she had not felt that she needed to do much advertising.

Still, she had placed advertising in Good Housekeeping (after all, the trap had earned the Good Housekeeping Seal of Approval) and in other “home and shelter” magazines. Martha was the company’s only salesperson, but she intended to hire more salespeople soon. Martha had initially forecasted Trap-Ease’s first-year sales at five million units. Through April, however, the company had only sold several hundred thousand units. Martha wondered if most new products got off to such a slow start, or if she was doing something wrong. She had detected some problems, although none seemed overly serious. For one, there had not3 been enough repeat buying.

For another, she had noted that many of the retailers upon whom she called kept their sample mousetraps on their desks as conversation pieces—she wanted the traps to be used and demonstrated. Martha wondered if consumers were also buying the traps as novelties rather than as solutions to their mouse problems. Martha knew that the investor group believed that Trap-Ease America had a “once-in-alifetime chance” with its innovative mousetrap, and she sensed the group’s impatience with the company’s progress so far. She had budgeted approximately $250,000 in administrative and fixed costs for the first year (not including marketing costs).

To keep the investors happy, the company needed to sell enough traps to cover those costs and make a reasonable profit. BACK TO THE DRAWING BOARD In these first few months, Martha had learned that marketing a new product was not an easy task. Some customers were very demanding. For example, one national retailer had placed a large order with instructions that Trap-Ease America was to deliver the order to the loading dock at one of the retailer’s warehouses between 1:00 and 3:00 p. m. on a specified day. When the truck delivering the order arrived after 3:00 p. m. , the retailer had refused to accept the shipment.

The retailer had told Martha it would be a year before she got another chance. As Martha sat down at her desk, she realized she needed to rethink her marketing strategy. Perhaps she had missed something or made some mistake that was causing sales to be so slow. Glancing at the quotation again, she thought that perhaps she should send the picky retailer and other customers a copy of Emerson’s famous quote. Questions for Discussion 1. Martha and the Trap-Ease America investors believe they face a once-in-a-lifetime opportunity. What information do they need to evaluate this opportunity?

How do you think the group would write its mission statement? How would you write it? (1 marks) 2. Has Martha identified the best target market for Trap-Ease? What other market segments might the firm target? (1 marks) 3. How has the company positioned the Trap-Ease for the chosen target market? Could it position the product in other ways? (1 marks) 4. Describe the current marketing mix for Trap-Ease. Do you see any problems with this mix? (4 marks) 5. Who is Trap-Ease America’s competition? (1 marks) 6. How would you change Trap-Ease’s marketing strategy? What kinds of control procedures would you establish for this strategy? (2 marks)

Trap-Ease America: the Big Cheese of Mousetraps. (2018, May 06). Retrieved from https://studymoose.com/trap-ease-america-the-big-cheese-of-mousetraps-essay 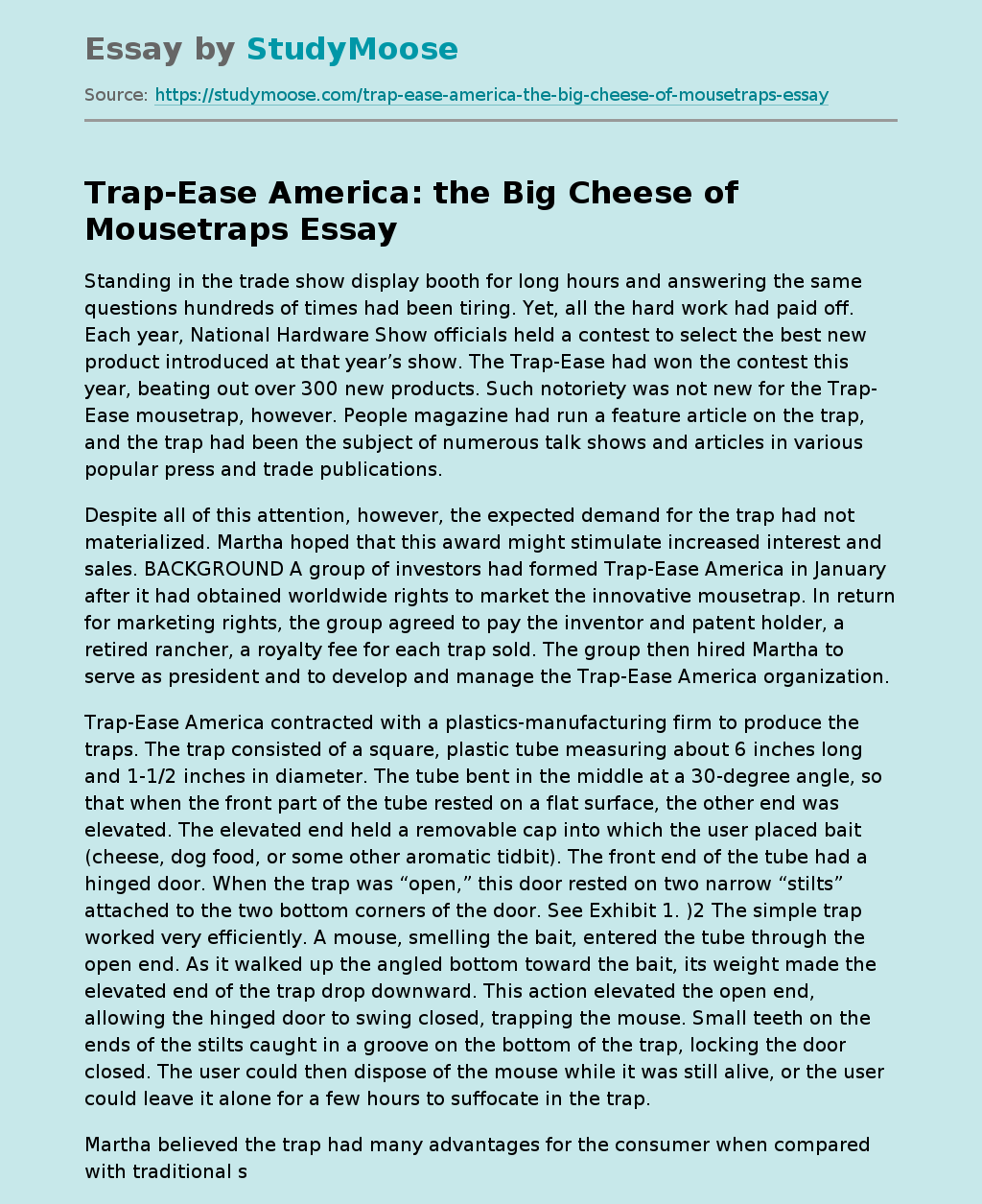