Although long been passed in year 2000, the Solo Parents’ Welfare Act of 2000 or Republic Act 8972 has yet to be completely implemented by the national and local governments, according to Carina Javier, president of the Solo Parents Support Group at the Department of Social Welfare and Development-Central Office (DSWD-CO), in a recent Philstar.com report. RA 8972 is an act that provides special benefits and privileges to solo or single parents and their children, which include livelihood assistance, counseling services, education scholarships or discounts, flexible work schedule, additional work leaves, and health or medical assistance, among others.

But not everyone knows that such act even exists, Javier said. Apart from that, some solo parents could not avail of said benefits in spite of being entitled to it under Philippine laws.

An example, she said, is the seven-day leave of a solo parent that is separate from the normal vacation or sick leaves. “It is high time for the government to focus on the real situation and real needs and concerns of solo parents because the problem of solo parents creates other problems such as poverty, lack of employment, children deprived of education and juvenile delinquents,” Javier was quoted in the Philstar.

com report. Her group is also requesting the Aquino administration to come up with a law reducing the taxes on solo parents by 20 percent, as well as discounting on tuition fees of their children who are 17 years old and below enrolling in private schools.

Who are Solo Parents?

Those unmarried, separated, annulled, and widowed are considered solo parents.

Even rape victims who decided to keep the child, and those whose spouse are detained or are physically or mentally incapacitated are included in the group.

Javier disclosed that the DSWD has no survey yet on the number of Filipino solo parents. However, she believes that the statistic is increasing. A study conducted by the Department of Health and the University of the Philippines-National Institute for Health revealed that 14 million out of approximately 94 million Filipinos are solo parents, or which is about 14-15 percent of the total population. The World Health Organization funded the said study. The Philstar.com report also revealed that about 180,290 families that are beneficiaries of the Pantawid Pamilyang Pilipino Program (4Ps) of the current administration are headed by solo parents.

Two months ago, it has been reported that around 13.9 million solo parents will be given added relief in response to House Bill 6184 that was approved by the House of Representatives. The HB 6184, according to partylist Representative Carol Jayne Lopez of the You Against Corruption and Poverty (YACAP) in a Manila Bulletin report, “will amend the Solo Parent Welfare Act of 2000 by extending wide ranging benefits for solo parents, including the grant of discounts on certain commodities.” It also aims to expand the “qualification of solo parent to persons left to take the responsibility of parenthood due to the disability or incapacity of the other spouse.” With the new house bill, solo parents will also enjoy additional benefits such as “10 percent discount on children’s clothing materials for all purchases made within two years from the birth of the child; 15 percent discount on baby’s milk and food supplements in the first two years of a child; and 15 percent discount on all purchases of medicine and other medical supplements or supplies.”

But for solo parents to be able to avail of these benefits, they shall present the solo parent identification card, along with the birth certificate of their child, or whatever evidence is necessary to prove entitlement, to commercial establishments or government agencies they will transact with. Lopez, who has been a staunch advocate of the causes of solo parents, is one of the principal authors of the said bill and a solo parent herself. She urged the Aquino administration to support the bill, with a reminder how former President Cory Aquino became a solo parent, too, after the assassination of former Senator Ninoy Aquino. “We can therefore say her son President Aquino clearly understands the enormous challenges facing solo parents who are raising their families by themselves,” she said in the Manila Bulletin report. Violators of said bill will face fines of up to P200,000 and jail term of not less than one year.

You are considered a single parent if you are:

[1] A woman who gives birth as a result of rape and other crimes against chastity even without a final conviction of the offender: Provided, That the mother keeps and raises the child;

[2] Parent left solo or alone with the responsibility of parenthood due to death of spouse;

[3] Parent left solo or alone with the responsibility of parenthood while the spouse is detained or is serving sentence for a criminal conviction for at least one (1) year;

[4] Parent left solo or alone with the responsibility of parenthood due to physical and/or mental incapacity of spouse as certified by a public medical practitioner;

[5] Parent left solo or alone with the responsibility of parenthood due to legal separation or de facto separation from spouse for at least one (1) year, as long as he/she is entrusted with the custody of the children;

[6] Parent left solo or alone with the responsibility of parenthood due to declaration of nullity or annulment of marriage as decreed by a court or by a church as long as he/she is entrusted with the custody of the children;

[7] Parent left solo or alone with the responsibility of parenthood due to abandonment of spouse for at least one (1) year;

[8] Unmarried mother/father who has preferred to keep and rear her/his child/children instead of having others care for them or give them up to a welfare institution;

[9] Any other person who solely provides parental care and support to a child or children;

[10] Any family member who assumes the responsibility of head of family as a result of the death, abandonment, disappearance or prolonged absence of the parents or solo parent.

A change in the status or circumstance of the parent claiming benefits under this Act, such that he/she is no longer left alone with the responsibility of parenthood, shall terminate his/her eligibility for these benefits.

Who are considered as “children” under RA 8972?

The term “children” refers to those living with and dependent upon the solo parent for support who are unmarried, unemployed and not more than eighteen (18) years of age, or even over eighteen (18) years but are incapable of self-support because of mental and/or physical defect/disability.

What are government agencies required to provide under RA 8972?

The DSWD shall coordinate with concerned agencies the implementation of the comprehensive package of social development and welfare services for solo parents and their families.

What are included in this package of services for single parents?

The package of services will initially include:

(a) Livelihood development services which include trainings on livelihood skills, basic business management, value orientation and the provision of seed capital or job placement.

(b) Counseling services which include individual, peer group or family counseling. This will focus on the resolution of personal relationship and role conflicts.

(c) Parent effectiveness services which include the provision and expansion of knowledge and skills of the solo parent on early childhood development, behavior management, health care, rights and duties of parents and children.

What is “flexible work schedule”?

It is the right granted to a solo parent employee to vary his/her arrival and departure time without affecting the core work hours as defined by the employer. Under Section 6 of RA 8972, the employer shall provide for a flexible working schedule for solo parents: Provided, That the same shall not affect individual and company productivity: Provided, further, That any employer may request exemption from the above requirements from the DOLE on certain meritorious grounds.

What about the issue of work discrimination, in terms of job assignments or promotion?

Section 7 of RA 8972 provides that no employer shall discriminate against any solo parent employee with respect to terms and conditions of employment on account of his/her status.

What is the so-called single parent leave?

In addition to leave privileges under existing laws, parental leave of not more than seven (7) working days every year shall be granted to any solo parent employee who has rendered service of at least one (1) year.

A common problem of single parents is providing educational opportunities for their children. Does RA 8972 have provision on this issue?

The DECS, CHED and TESDA are mandated to provide the following benefits and privileges:

(1) Scholarship programs for qualified solo parents and their children in institutions of basic, tertiary and technical/skills education; and

(2) Nonformal education programs appropriate for solo parents and their children.

Another problem of single parents is housing. What benefits if any are provided under RA 8972?

Solo parents shall be given allocation in housing projects and shall be provided with liberal terms of payment on said government low-cost housing projects in accordance with housing law provisions prioritizing applicants below the poverty line as declared by the NEDA.

What about medical assistance?

The DOH shall develop a comprehensive health care program for solo parents and their children. The program shall be implemented by the DOH through their retained hospitals and medical centers and the local government units (LGUs) through their provincial/district/city/municipal hospitals and rural health units (RHUs).

You can communicate with the DSWD office of your town or city with regards the requirements to be submitted. 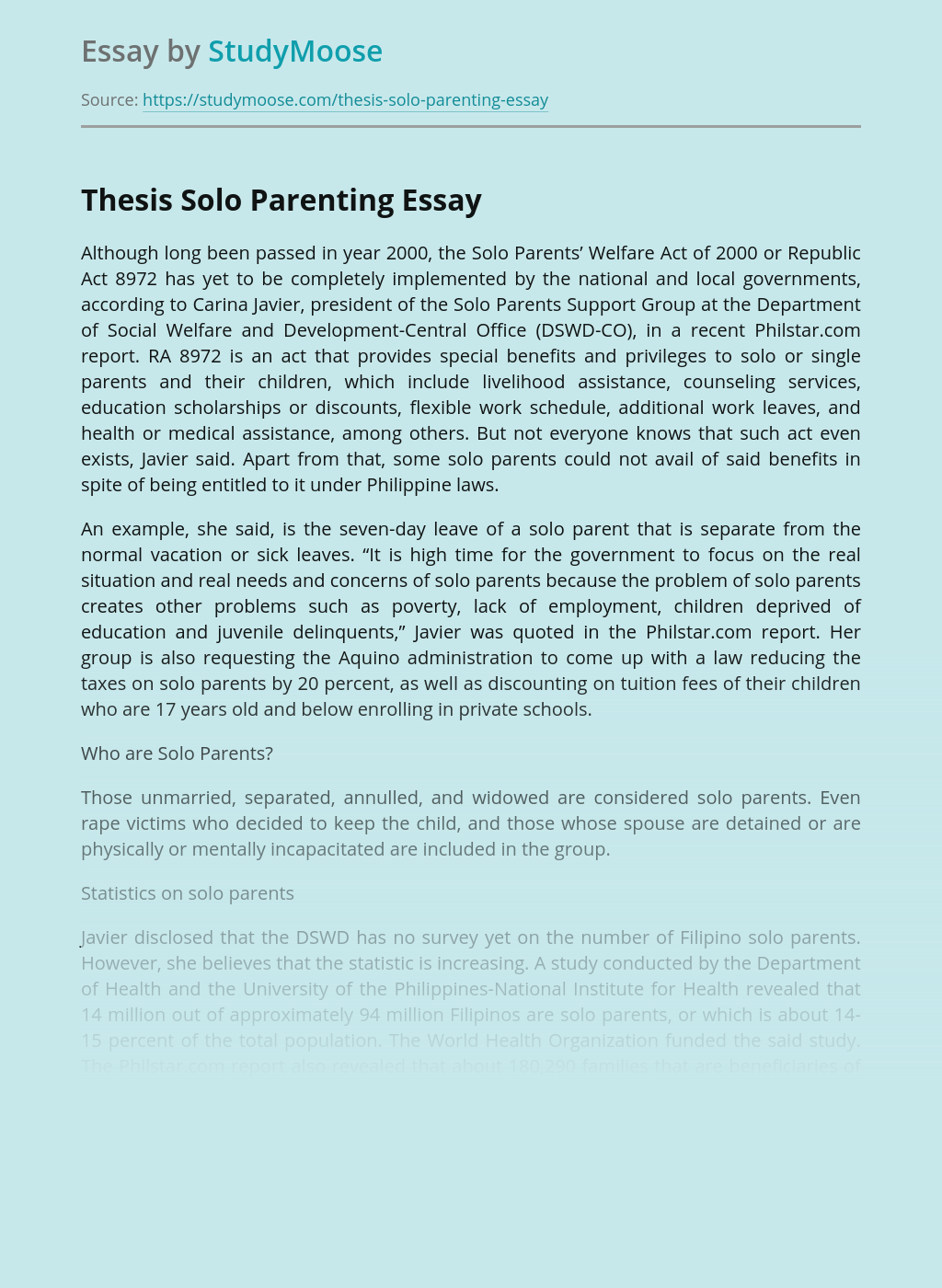