Theme of Capital Punishment in The Green Mile

Categories: Capital PunishmentStephen KingThe Green Mile
Download paper
Download
Essay, Pages 3 (564 words)
Views
434
“The Green Mile” was a novel written by Stephen King in 1996. The story takes place in 1932 on the “E” Block or otherwise known as death row in Cold Mountain Penitentiary somewhere in Georgia. It is narrated by the main character, Paul, who is the captain of the prison guards who supervise the “E” Block. “The Green Mile” is the hallway between the cells of the cell block that leads to the execution room. The corridor is covered in green linoleum, hence, the “last” or green mile the inmates take to their death.
Turn in your highest-quality paper
Get a qualified writer to help you with
“ Theme of Capital Punishment in The Green Mile ”
Get high-quality paper
NEW! AI matching with writer

The story follows John Coffey, a large, black inmate convicted of raping and murdering two young white girls, and the other two inmates on death row, along with the guards who watch over them. Coffey is special, as Paul discovers, and he has magical healing abilities that become clear. The second of three inmates, Eduard Delacroix befriends a small white mouse, who he names Mr. Jingles, and Coffey heals the mouse when the young and reckless guard Percy Wetmore tried to kill it.

Coffey also heals Paul’s urinary tract infection, and later, Paul temporarily breaks him out of the prison to heal the warden’s wife’s brain tumor. Coffey “transfers” this brain disease to Wetmore, the cruel guard who the inmates and staff dislike. Wetmore never recovers and spends the rest of his life in a mental institution. Eventually, Paul discovers that Coffey is extraordinary in many areas. It turns out he did not murder the two girls, another inmate (William Wharton) or as the inmates call him Wild Bill had murdered the girls.

Coffey doesn’t want to be pardoned, and dies in the electric chair because he can no longer cope with the vicious cycle of real life. After his death, Paul discovers that each of the people Coffey has healed live unusually long lives. Paul is 108 at the end of the book, and Mr. Jingles is 64. They have no idea how long they will live, and then the novel ends. Characters Paul Edgecombe – Paul is the main character. A prison guard, by the end of the story he is an old man narrating this part of his life to a friend who is writing his memoir.

John Coffey – A nearly 7-foot-tall black man, a convicted murderer awaiting his death sentence on death row in the prison. He befriends a white mouse and heals people of their diseases. Percy Wetmore – A sadistic prison guard who everyone dislikes. He torments the prisoners, tries to kill Mr. Jingles, the mouse, and deliberately botches an execution where the inmate suffers terribly. He keeps his job because he is related to the governor. Eduard Delacroix – A Cajun man convicted of arson, he is essentially a coward. He is the man who dies a horrible death at the hands of Wetmore.

William Wharton – Another convict, it turns out he is the one who actually committed the murder attributed to John Coffey. He is wild and frightening, and attempts to disrupt the prison as much as he can before he dies. Mr. Jingles – The white mouse that lives to be 64. Overall the novel is a timeless classic, was definitely filled with information that the movie obviously doesn’t have. Though the movie was also amazing and was nominated for 4 Oscars. It displayed great screenplays from Tom Hanks to Michael Clarke Duncan.

Theme of Capital Punishment in The Green Mile. (2017, Mar 05). Retrieved from https://studymoose.com/theme-of-capital-punishment-in-the-green-mile-essay 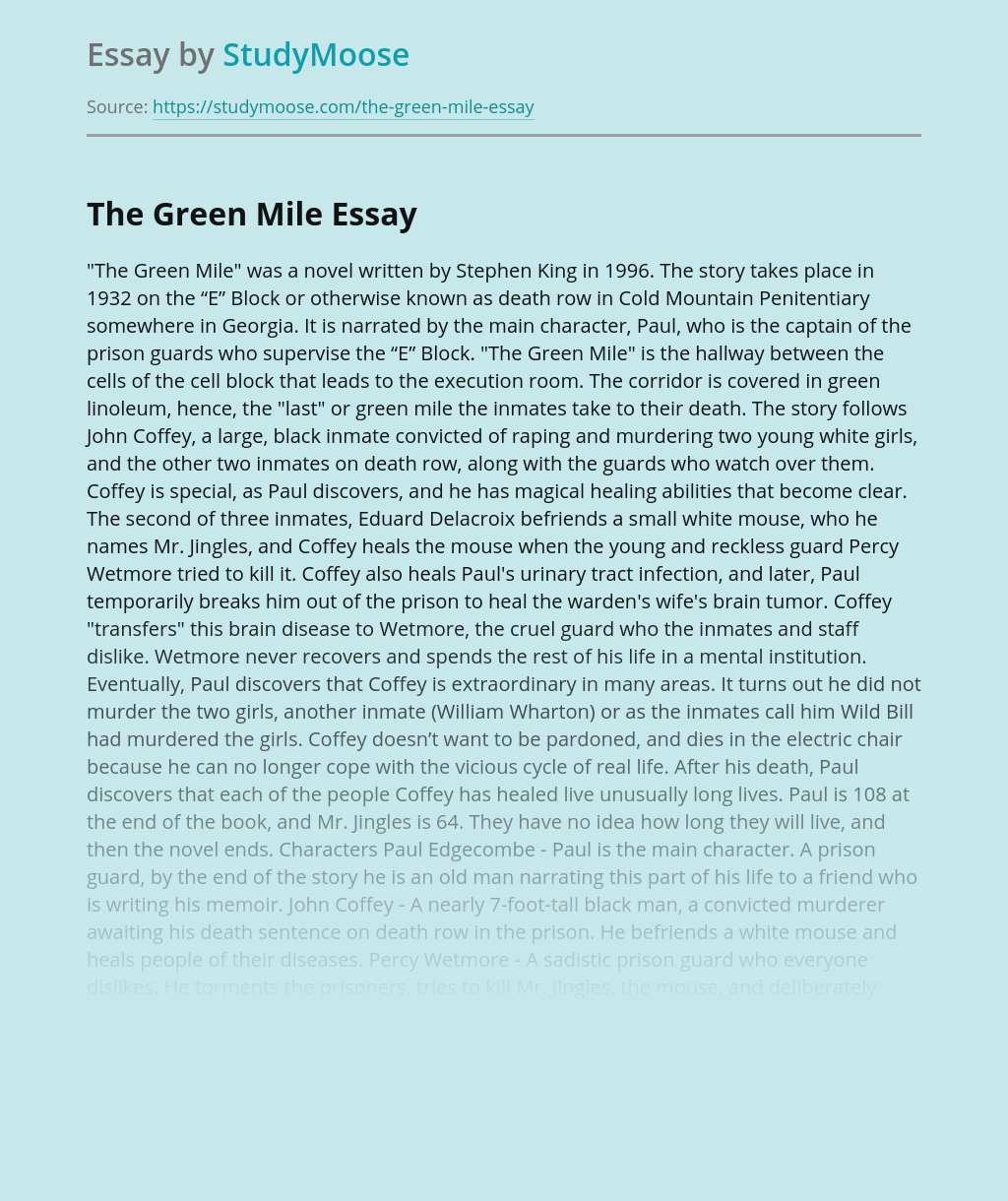 Turn in your highest-quality paper
Get a qualified writer to help you with
“ Theme of Capital Punishment in The Green Mile ”
Get high-quality paper
Helping students since 2015
Stay Safe, Stay Original