The transfer of substances

The transfer of substances containing carbon between organisms and between organisms and the environment Carbon is a component of all major molecules in living organisms, which makes obtaining it a very important process. These organisms obtain and lose carbon through the carbon cycle. The cycle begins with carbon dioxide in the atmosphere being fixed into organic molecules through photosynthesis. In photosynthesis, the carbon dioxide diffuses into the leaf through the stomata and is reduced by hydrogen from the light-dependent reaction (where photolysis of water has taken place using the light energy absorbed in the chlorophyll to produce protons, electrons and oxygen.

Don't use plagiarized sources.
Get Your Custom Essay on The transfer of substances Just from $13,9/Page

These are then converted to useful organic molecules such as glucose or used to regenerate ribulose bisphosphate so the Calvin cycle can take place again using another CO2 molecule.

Eventually this carbon, usually in the form of glucose, is then either ingested by an animal eating the plant, or leaves the plant by respiration. The process of respiration is made up of four stages, the first of which is glycolysis. Glycolysis takes place in the cytoplasm of all living cells, and is the first stage of both aerobic and anaerobic respiration. During the process a 6-carbon glucose molecule is split into two molecules of 3-carbon pyruvate. It begins with the addition of two phosphate molecules to the glucose, these two phosphate molecules come from the hydrolysis of two ATP molecules to ADP ,this is known as phosphorylisation,.

This action is necessary as it lowers the activation energy of the enzyme-controlled reactions involved in glycolysis. The phosphorylated glucose is then split into 3-carbon triose phosphates. Hydrogen is then removed from each of these triose phosphate molecules and transferred to a hydrogen-carrier molecule known as NAD to give reduced NAD. Enzyme controlled reactions then convert the triose phosphates into pyruvate. The next stage of respiration is the link reaction, during which the two pyruvate molecules are oxidised by removing hydrogen which is accepted by NAD to produce reduced NAD, then the 2-carbon molecule combines with a molecule called coenzyme A to give acetyl CoA and carbon dioxide. Acetyl CoA then combines with a four carbon molecule in the Krebs cycle to produce a 6 carbon molecule, which then loses carbon dioxide and hydrogens to give a 4 carbon molecule and one molecule of ATP as a result of substrate-level phosphorylation, this then leaves the 4 carbon molecule to combine with another acetyl CoA and begin the cycle again.

The final stage is the electron transfer chain and results in oxygen being the final acceptor of the electrons from the reduced NAD and FAD, and combine with protons from the hydrogen atoms to form water. In the carbon cycle, carbon also leaves organisms through combustion. Combustion is the burning of hydrocarbons to release energy and produce water and carbon dioxide, which will then return to the atmosphere. Carbon is also returned to the atmosphere in the form of carbon dioxide when dead plants and animals are broken down by saprobiotic microorganism which is followed by decay, releasing the carbon dioxide back into the atmosphere. Carbon is passed between organisms through food chains. A food chain is a feeding relationship between producers and consumers.

As mentioned earlier the carbon enters the food chain through plants, which are known as the producers as they provide the organic substances to the rest of the food chain using light energy, carbon dioxide and water during photosynthesis. These producers are then eaten by primary consumers, which are unable to use sun light to photosynthesis so get their energy from eating the carbon containing producers. These primary consumers may then be eaten by secondary consumers, who in turn are eaten tertiary consumers, so the carbon containing molecules are continually being moved up the trophic levels of a food chain, however less will be transferred between each level for many reasons, such as not all the organisms are eaten, or not all the organism is digestible in the consumer.

When the carbon is eaten by humans in the form of carbohydrates they need to be broken down In order to be digested in the body. Food is physically broken down into smaller pieces by the teeth which gives a larger surface area for chemical digestion. Chemical digestion breaks large insoluble molecules into smaller soluble ones through hydrolysis using enzymes. Carbohydrases are the type of enzymes which brake down carbohydrates. For example Starch, which is a polypeptide made up of many glucose monosaccharides bonded together through glycosidic bonds, is broken down into maltose by amylase which is then broken down by maltase into alpha glucose molecules which are able to be absorbed into the blood from the small intestine.

The transfer of substances. (2016, Sep 22). Retrieved from https://studymoose.com/the-transfer-of-substances-essay 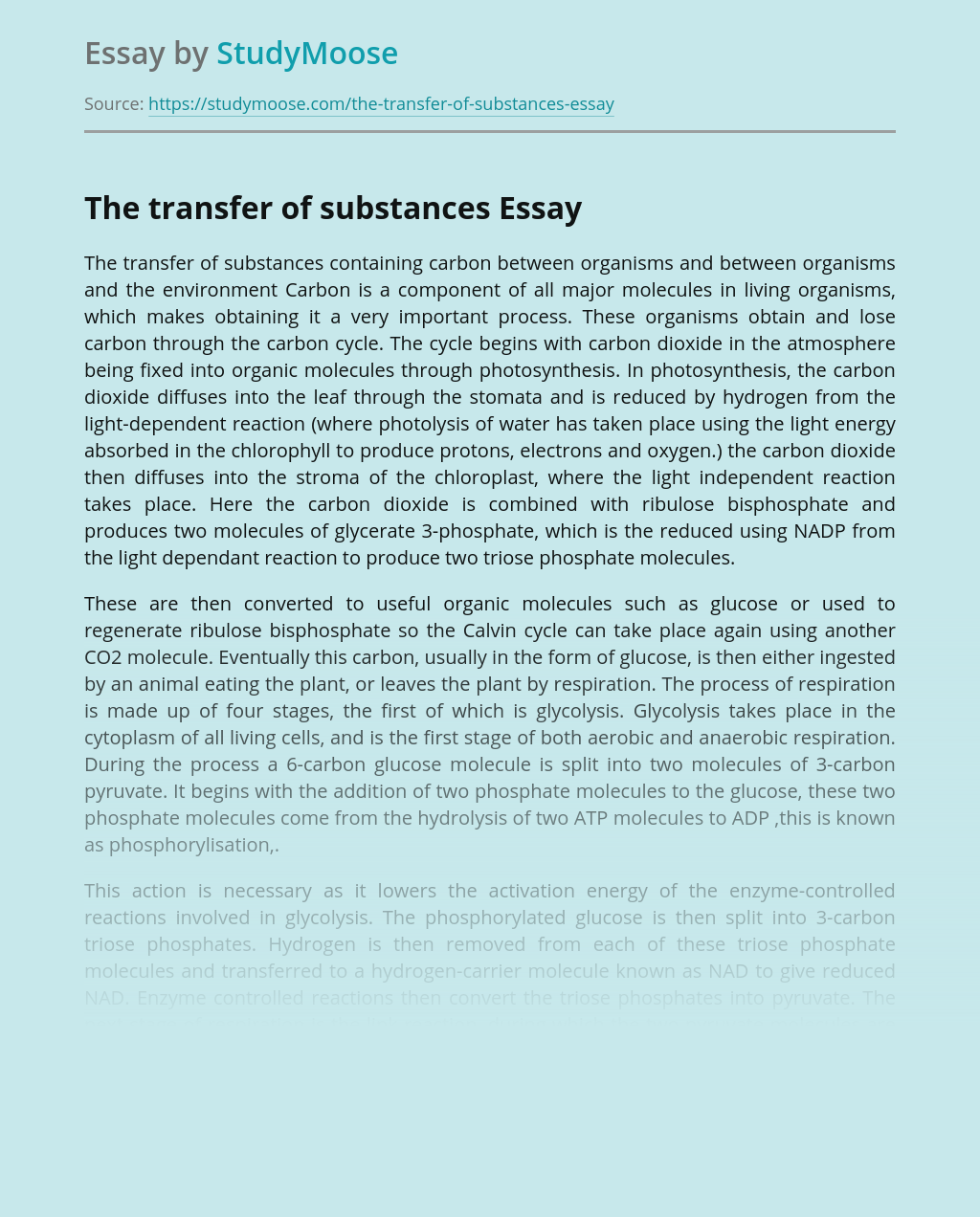 The Building Blocks of Life Worksheet

Photosynthesis and respiration are both processes that are necessary for the survival of organisms. However, in numerous ways these two processes are very diverse as they are responsible for distinct necessities. Therefore they both have similarities and differences. One major difference between the two is that photosynthesis takes place completely in plants while respiration occurs...

Go Glow Grow is a nutrition curriculum developed for preschool children. In conjunction with the book Go Glow Grow: Foods for You, children learn about healthy eating, exercising and the importance of hand washing. Using a simplified version of MyPlate, children learn the connection between healthy foods and what they do for the body. •Grains...